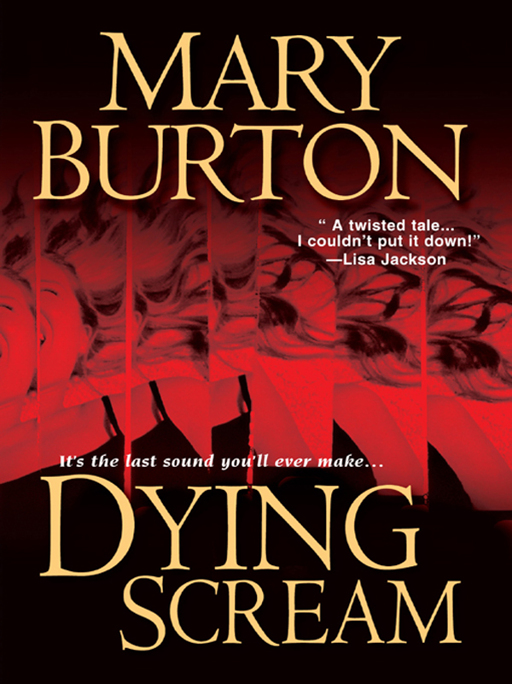 The killing just won't stop as a ruthless psychopath revisits his greatest obsession--but this time, a Richmond, Virginia homicide detective is determined to stop him in his bloody tracks. . .

An aspiring artist. A high-school senior. A stripper. Three missing women with only one thing in common--wealthy Craig Thornton knew them all. For that, they paid the ultimate price.

When Craig's widow, Adrianna, begins to receive cards and flowers from her late husband, she assumes it's someone's cruel joke. Then grisly remains are found on the Thornton estate. Detective Gage Hudson believes the bodies are linked to Craig. But the biggest shocks are yet to come. A psychopath has resumed his work, each death a prelude to his most cherished target. The only way to stop him is to uncover a family's dark past--and a twisted love someone will kill for, again and again. . .

Praise for the novels of Mary Burton

"Will have readers sleeping with the lights on." --*Publishers Weekly on Before She Dies (starred review)

"Terrifying. . .this chilling thriller is an engrossing story." --Library Journal on Merciless

"Stieg Larsson fans will find a lot to like in Burton's taut, well-paced novel." --Publishers Weekly on Senseless*

“I just can’t imagine Craig as a killer,” Adrianna said.

“Who do you think could have killed those women other than him?” Gage asked.

“Have you received any more cards or phone calls?”

“After you left my shop, someone sent me flowers.”

“The other night I got a postcard in the mail. Just a plain advertisement for aftershave—Craig’s old aftershave.”

“I’ve got to admit, each incident has really spooked me.”

“Never ignore a gut feeling, Adrianna. If you sense danger, then get the hell out of wherever you are and call me…”

Time had degraded the videotaped image of the cowering woman.

A line skimmed down the center screen now peppered with electronic snow, and a sallow haze paled the image’s once vibrant colors.

As he’d made his movies over the last twelve years, he’d expected them to last forever. He’d never realized excessive viewing coupled with time would degrade the tapes of his three actresses and their final performances. The first tape wasn’t a great loss. He didn’t understand lighting, costumes, or camera angles. He’d been rushed and nervous. But as time passed, he’d gained experience and confidence and by the last tape, he’d honed his moviemaking talent.

Remote in hand, he leaned forward and directed his attention to the most recent tape in his collection. He tuned out the annoying technical distractions and focused on the woman.

A pale satin slip, the shade of forget-me-nots, skimmed her full breasts and slim body and pooled over long legs tucked under her round bottom. A blond wig covered chestnut hair and accentuated a pale face and listless brown eyes underscored by smudged mascara. Blue-black bruises darkened her cheeks. She stared sightlessly toward the ceiling, cradling the hand he’d broken the last time she’d resisted.

Off-screen a door opened and closed. Keys jangled. The woman straightened and tried to stand, but a waist-hugging chain forced her to remain on her knees. “Hello?”

He’d never stepped in view of the camera lens. “Sorry I’m late. I didn’t mean to be gone so long.”

The woman’s chest started to rise and fall in rapid, short breaths. “I thought you weren’t coming back.”

He’d been gone eighteen hours. “I couldn’t leave you forever.”

Over the last two weeks, he’d left her intermittently. Each time he made his exit, he threatened never to return as he shut the door. Then from a closed circuit television he watched as she begged him not to leave and yanked at her tether. Then after three, five, or ten hours, he’d return. Each time she wept, her expressive features reflected relief, horror, and flickers of anger. Slowly he’d been breaking her down, teaching her that her world revolved around him alone.

Now as she glanced up, she offered a smile both pleasing and desperate. “Now are you going to let me go?”

Her smile faltered. “You said next time when you came back I could leave.”

“I’ve changed my mind.” He zoomed in the video image. “I’ve enjoyed your performance so much I find I can’t say good-bye.”

The close-up vividly captured expressive eyes that mirrored disappointment and a terrifying understanding. “You’re never going to let me go, are you?”

“Didn’t I promise?” He sounded defensive.

Fresh tears rolled down her cheeks. Her lips quivered. She seemed to sense that this was the end. Game over.

Hysterically she started to yank the chain. Her breasts bounced delightfully as she struggled. “Let me go! Why are you doing this to me!”

“Let me go!” She all but howled the words.

“I told you that I loved you. What are you supposed to say?” The words dripped with annoyance. How many lessons would it take for her to play her part correctly?

“You are not Rhonda!” He snapped his fingers. “Say the words like I taught you. Or I will get the cattle prod.”

“Say it.” This would be their final scene together. And he couldn’t hide the desperate anticipation from his voice.

The woman closed her eyes. “I love you.” The faint whisper, void of feeling, tumbled out like rubbish from a bin. All the spirit and fight she’d had in the beginning was gone.

The words left him wanting. “Say it again. And look at me when you speak.”

The woman looked directly at him. “I love you.”

Nervously, she picked at the chipped red nail polish on her toenails. A ladybug tattoo framed her right ankle. “Can I leave now?”

He ignored her question. “Why do you have a ladybug tattoo?” These last two weeks he’d loved touching it. Kissing it.

Tears streamed down her face as if she realized her words had no effect on him. “I told you a million times.”

His laughter rumbled rich and genuine. “For me, it’s good luck. Not such good luck for you.”

Her eyes flashed with sudden hot anger. “Why do you keep doing this to me?”

“Playing games. Why don’t you let me go? I’ve sworn that I’ll keep this secret. I just want to go home. I want to forget. I want to live.” The camera zoomed and caught the beads of sweat on her forehead. “I have done everything you asked.”

She tipped her head back and he could see her dark hair peeking out from under the wig. She was ruining the moment.

“Say it again.” His voice projected the annoyance he’d felt that day. “And say it like you mean it!”

The woman dropped her gaze and fisted the fingers on her left hand so tightly her nails drew blood. For several long seconds, she remained silent.

The snap of the prod had her meeting his gaze. “I love you.”

“Craig. Your name is Craig. I love you, Craig.”

This time she looked directly at the camera and nearly screamed the words. “I love you, Craig!”

His erection hardened and finally he was able to take her. Though he’d been driven by powerful emotions, he was mindful of the all-seeing lens and careful to keep his face turned away from the camera.

She’d lain under him, the slip bunched around her waist, her body as still and cold as a lake in winter. His climax had come quickly, violently. He’d never felt so alive, so in the moment, and for those fleeting seconds the voices that always stalked him—told him he wasn’t good enough—went silent.

Now as Craig viewed the tape for the hundredth time, the exquisite feelings he’d once enjoyed, like the tape, had faded.

The indefinable hunger that had tracked him for so many years had returned and the heavy weight of anticipation bore down on his chest. Lately, no matter how much he watched the tape, his darkest appetites clawed at his insides, begging to be satisfied.

Craig leaned toward the television and touched the image of her face. He traced her eyes and then her lips.

From the edge of the screen, the camera captured the tip of a gun barrel. The woman shrank back, trying to press herself through the wall.

Crying, she tried to crawl away, but the chain stopped her as he grabbed the wig and tossed it aside. He wrenched her upward. Her fingers clawed at his hand as she screamed and struggled to get free. He held on tight and raised the .38 to her temple.

The Restaurant at the End of the Universe by Douglas Adams
Genesis (The Exodus Trilogy) by Andreas Christensen
Blood Bond by Sophie Littlefield
Wicked and Wonderful by King, Valerie
EarthRise by William C. Dietz
Suffocating Sea by Pauline Rowson
No Test for the Wicked: A Lexi Carmichael Mystery, Book Five by Julie Moffett
She's Not There by P. J. Parrish
Take a Chance on Me by Carol Wyer
Theft by Peter Carey