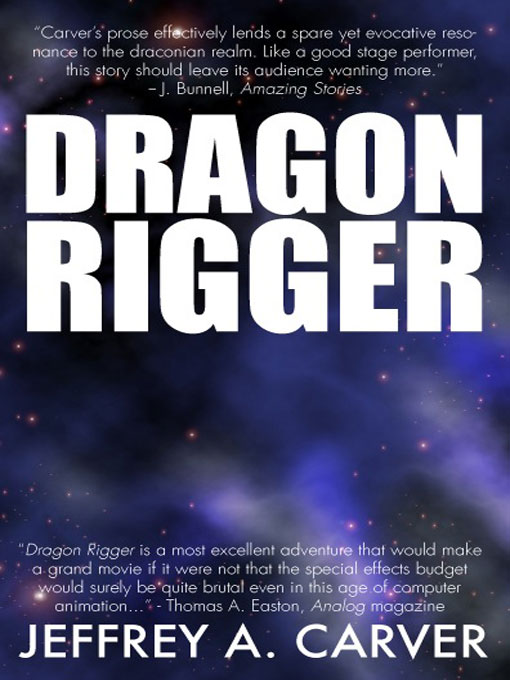 Copyright © 1993 by Jeffrey A. Carver
Published by E-Reads. All rights reserved.
SKU: ERBAEN0037

Books by Jeffrey A. Carver

Novels of the Starstream

From a Changeling Star
Down the Stream of Stars

For all my friends at Pilgrim,
wherever the winds may take you . . .
*
. . . and for Sam,
dragon among dogs.
See you in the Final Dream Mountain.

PART ONE:
THE DRAGONS
Prologue

"Now you all know—" the lanky ex-rigger paused to gulp from his ale—
ahhhh!
"—just how dangerous star travel can be." He peered out across the spaceport bar, studying the faces looking back at him—mostly young star-riggers who
thought
they knew a lot more than they did. "You all know that much, right?" he asked rhetorically. "Well, I'm
tellin'
you, it's a lot more dangerous than you ever imagined. Swear t'God!"

He burped and made a sweeping gesture with his mug. He reeled a little from the movement. His unkempt hair fell across his eyes, and he swept it back in annoyance. He had a story to tell, and the audience was volatile. Mustn't keep them waiting. "Y'see—"

"Just tell us the frickin' story, will you?" a fat man complained, from across the room.

"I
am
tellin' ya, dammit!" he said with a glare. He ticked off on his fingers the events that had occurred seven years ago this month. "
One!
We flew into the mountain region, cocky as all hell, thinking—there ain't nothing that can hurt
us.
We're two topflight, cream-of-the-crop, stay-out-of-our way, kick-ass riggers! Right? Besides, everyone knows there are no dragons really
there.
" He snorted at his own words. He glanced up, and twitched as a rigger in the back of the bar, not a human but some kind of horse-headed Swert, inhaled something from a chrome cylinder and blew an enormous, billowing neon bubble into the air above the barroom patrons.

He continued quickly, before anyone could get distracted. "
Two!
It wasn't more'n ten minutes before a whole flight of dragons appeared—and I don't mean some kinda cute lizards. I mean
dragons.
Huge things! We tried to make contact with them.
Friendly
contact." He barked out a bitter laugh, which seemed to have an odd effect on his audience. Some looked cynical, others looked puzzled. At least he was getting through to somebody.

A sword-wielding knight sprang up from the top of someone's head about three tables back and stabbed a few times with its blade, before winking out. The ex-rigger glared at the kid with the holo, a scrawny-looking, red-haired misfit who didn't even look old enough to be at a bar. The kid snickered nervously.

"Three!"
the rigger roared, trying to overcome the interruption. "The bastards set on us like a pack of Alsepian blood wolves!"

"It
was
a dogfight!" the rigger snapped. "Just like in prespace times. Except there was just the two of us in our ship, and at least four of them, flyin' around like crazy, blowing fire and smoke and tryin' to knock us out of the sky! You wouldn't've known we were in space, it looked so much like real mountains and sky. Never
seen
anything so real in the Flux. We couldn't do a thing to change the image, except turn our ship into a fighter-flyer and pray for the best." He shook his head, lost in his own story. "But our best wasn't much. There we were, twistin' and turnin' in the air, tryin' to scoot away from 'em. But—" and his voice caught as the fear rolled back up his spine, as though it had happened yesterday.

"They beat you, is that what you're trying to say?" snickered the red-haired kid.

The rigger leveled a drunken gaze at his taunter, so cocky and naive. Another holo erupted from the kid's head—a cartoonish figure of a man reeling and spinning before falling over with a sword hilt sticking out of his stomach. That evoked a few sardonic titters, which was clearly the reaction the kid wanted. The older rigger shook his head. He hated whiny, false bravado.

"Yeah, they beat us, you little punk. Four dragons, each one the size of this room, beat us in combat. Can you imagine that? We musta been weaklings."

He was answered with a restless stirring, and he continued at once. "They didn't kill us right off, though. They boxed us in and forced us down on a plateau.
Full-stop landing.
" He paused for emphasis. The Flux never stopped moving in its endless course among the stars; everyone knew that. Only this time it had.

"They started lookin' us over," he said more softly. "Four fire-breathin' dragons, about to flame us to cinders right there in the net—and two scared-as-piss riggers, I don't mind admittin' it." He paused and gulped his ale. "I didn't think I'd ever see home again. And I wouldn't've, either, if it hadn't been for the iffit, I mean if'ing . . ." He struggled with the memory, teetering, even with one elbow propped on the wooden bartop to support himself. "If that thing hadn't've showed up and told the dragons—" A belch erupted without warning from his throat, interrupting him.

"Let me guess! A prophecy?" someone shouted.

He stared in the general direction of the shout. He had at least some of them listening, even if they didn't want to admit it. "Well, you're getting a little ahead of the story, but yes, it told them the proph—
buurp!
—ecy." He put his fist over his mouth in embarrassment.

"Which of course
you're
going to tell
us!
" called a whip-bodied humanoid, who maybe didn't know human rules of etiquette, or maybe couldn't help speaking in such a sneering tone of voice.

"Unless you don't remember it!" called a shrill-voiced woman. Derisive laughter echoed after her.

"I remember it!" he said hotly. "Better than you remember your own name! Just give me a second to collect myself." He was trying not to become angry.

"Canteen, we've given you too much time already!" yelled a man just down the stand-up bar from him. "Tell us another one, will you? Of course—" and the drinker guffawed "—we won't believe that one, either. We don't even believe you when you're sober!"

"Oh, no?" The rigger drew himself up in an effort to maintain some dignity. "Well, this partic'lar story happens to be true, you half-witted imbecile. And my name is
Kan-Kon,
if you don't mind." He ignored the answering cackles and continued, heedless of the momentum that was clearly building against him. "So you don't think I'm tellin' the truth? Let me tell you something—I was out there flyin' the stars before most of
you
was in
potty
training, much less rigger training! I'm telling you the dragons are out there, and they killed my shipmate and they damn near killed me! You're all so smug here, you don't—"

"Tell us and be done with it!"

Kan-Kon took another gulp, slopping ale on his sleeve. His fingers brushed uselessly at the spill. "Gah! Don't you know that stories—
true stories—
have to be savored like—"

"Kan-coon," shouted one of the veteran riggers, "either tell the damn story or shut up about it! We can't even have a conversation over here, with everyone laughing at you!"

"All right, Whitie," Kan-Kon said good-naturedly. "You've paid your dues. You've earned the right to nudge me a little, mebbe. As for the rest of you—
ahhhhh.
" He snorted and upended his mug, draining the last of the ale. Gasping, he cried, "All right, then! Here's what they told me—
after
they killed my partner, and before they threw me and my spaceship back into civilized space." He slammed the mug onto the bar with a crash that brought near silence to the barroom. "
Listen
to
the words!
"

Someone slid a fresh mug of ale in front of him.

He nodded, frowning, then raised his voice again. "
Without
friend will come one. And the realm . . . and the realm . . .
" And suddenly the words would not come. The words that were practically branded on his heart.

Kan-Kon sweated, trying to dispel the fog that was clouding his brain. "
And
the
realm shall tremble!
" he shouted.

The murmur from the crowd was not entirely sympathetic.

"Great! Is that it?" his encourager asked.

"No, there's more. I have it right on the tip o' my tongue.
Speaking her name will come one—
hey!" Someone was jostling his arm.

Someone or something tripped him, and his legs went out from under him like rubber. He crashed to the floor in a gush of ale. The other riggers shouted and jumped out of the way. "Jeez, I hope his
dragons
hold their ale better than he does!" one of them cried. "Hey, Ashcan," complained the whiny red-haired kid. "I think one of your dragons just
peed
on me! Can't you keep 'em on a leash?" Brightly colored holos danced in the air as someone helped Kan-Kon to his feet.

"I think you've had a little too much to drink, old man," said the one who was supporting him. "You tell enough of those stories, and sooner or later you're going to start believing them."

The hand supporting him wasn't just holding him up; it was propelling him toward the exit. A rising tide of hoots seemed to add impetus to the movement, and before he could fight back, he felt more hands pushing him toward the back door.

"Hey! Listen, you miserable—" he squawked, struggling to dig in his heels. But there was no stopping the movement now. The crowd surged and flowed like the currents of the Flux, making room for his passage.

"Good night, Tin Can!" someone yelled as the door opened before him. He felt a final shove at his back, and he stumbled out the door and fell to his hands and knees in the alleyway.

He raised his head and looked back indignantly. The door slammed shut, muffling the sounds of laughter. He hadn't exactly played the crowd tonight, had he? The stupid drunken sots. Didn't they know he was telling them the truth, and it was important? Were they too blind to see?

He sighed and lowered his head again, praying that the spinning would stop. Maybe he'd had a little too much to drink. But so what? He felt tears begin to well in his eyes, and the rest of the words rose suddenly, unbidden, in his throat, and he croaked them into the empty alleyway:

He raised his voice to a shout.

"
And you can
bet your ass
the realm will tremble!
"

Sighing in bitter triumph, he pushed himself back onto his feet and staggered away into the night.

Chapter 1: Dragons in The Realm

Lightning flashed in the sky like a demon's breath, splitting the night air with great jagged thrusts, hammering the vale with thunder. It was unnatural, WingTouch thought—that lightning, driven by a power no dragon could comprehend. All the dragons had felt its sting. Those who confronted it directly were burned from the sky. Those who lacked the courage, or perhaps the foolhardiness to stay in the battle, had already fled.

WingTouch fought to remain airborne in the tossing winds. Even here at the edge of the skirmish, the very air had become an adversary, turned against them by the devilish power of the Enemy. How could he fight a storm like this? All he could do was tumble through the maelstrom of wind, ignoring all else but the need to destroy the creatures who were attacking the valley.

Something blacker than the night passed before him, and he instinctively flexed his wings in pursuit. Gaining on the shadowy thing, he exhaled a lance of flame. His aim was perfect. The fire struck the fleeing creature, and he heard its wail of pain. WingTouch roared in triumph, but his victory was fleeting. The blackness rippled and veered and fled into the night. He had hurt it, but it was still alive and now he had lost it.