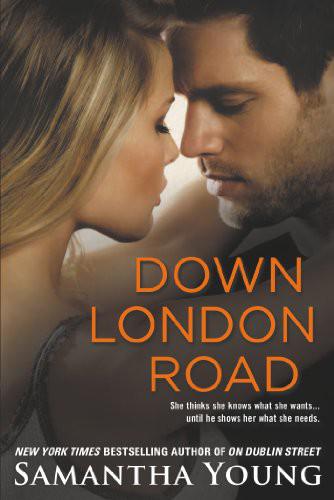 Samantha Young is a twenty-six-year-old Scottish book addict who graduated from the University of Edinburgh. She currently lives in Scotland. Her previous novel,
On Dublin Street
, is also published by Penguin.

I looked upon the piece of art and wondered what the heck I was looking at. To me it was just a bunch of lines and squares in different colours with some shading here and there. It looked familiar. In fact, I thought I had a picture Cole had drawn me when he was three years old tucked away somewhere that bore a remarkable resemblance to it. Although I doubted I could expect anyone to pay three hundred and seventy-five pounds for Cole’s drawing. I also doubted the sanity of anyone who would pay three hundred and seventy-five pounds for the piece of canvas that looked like it had been sitting next to a railway at the exact time a train full of paint careened off the rails and crashed.

However, chancing a glance around me, I could see that most of the people in the gallery liked the artwork. Maybe I wasn’t smart enough to get it. In an effort to appear more sophisticated for my boyfriend’s sake, I adopted a pensive expression and moved on to the next canvas.

‘Um, okay, I don’t get it,’ a low, husky voice announced beside me. I would have known that voice anywhere. Its American-accented words were disturbed here and there by a lilt, or the sharper consonants of a brogue, all a
consequence of its owner having lived in Scotland for almost six years.

Relief flooded me as I brought my head down to meet the gaze of my best friend, Joss. For the first time that evening, I smiled brightly. Jocelyn Butler was a straight-talking, ballsy American girl who tended bar with me at a pretty swank place called Club 39. It was a basement bar on one of the city centre’s most famous streets – George Street – and we’d been working together for five years now.

Kitted out in a designer black dress and Louboutins, my vertically challenged friend looked hot. So did her boyfriend, Braden Carmichael. Standing behind Joss, his hand resting possessively on her lower back, Braden exuded confidence. Drool-worthy, he was the kind of boyfriend I’d been searching for, for years, and if I didn’t love Joss so much and Braden didn’t adore her past all reasoning, I would have trampled over her to get to him. Braden was almost six and a half feet tall, which was ideal for someone of my height. I was a striking five foot ten – that made me more than six feet tall in the right heels. Joss’s boyfriend also happened to be sexy, rich, and funny. And he loved Joss to distraction. They’d been together for almost eighteen months. I could feel a proposal brewing.

‘You look amazing,’ I told her, eyeing her curves. Unlike me, Joss had big boobs, along with hips and an ass that wouldn’t quit. ‘Thank you so much for coming. Both of you.’

‘Well, you owe me,’ Joss muttered, her eyebrow arching as she glanced around at all the other paintings. ‘I’m going
to have to do some serious lying if the artist asks me what I think.’

Braden gave her waist a squeeze and smiled down at her. ‘Well, if the artist is as pretentious as her art, why lie when you can be brutally honest?’

Joss grinned back at him. ‘That’s true.’

‘No,’ I interjected, knowing that if I let her she would do just that. ‘Becca is Malcolm’s ex-girlfriend and they’re still friends. You go Robert Hughes on her ass and it’s my ass that gets kicked to the kerb.’

I sighed. ‘He was a famous art critic.’

‘I like that.’ Joss grinned evilly. ‘You know they say honesty is next to godliness.’

‘Of course it’s cleanliness, but surely honesty is a close second?’

The stubborn glint in Joss’s eyes caused my throat to almost close up. Joss was a force to be reckoned with, and if she had an opinion or wanted to say something, there was little you could do to stop her. When I first met her she was an incredibly private person, preferring not to get involved in her friends’ personal affairs. Since meeting Braden she’d changed a lot. Our friendship had grown, and Joss was now the only one who really knew the truth about my life. I was thankful for our friendship, but in moments like these I sometimes wished she was the old Joss, the one who kept her thoughts and emotions locked up tight.

I’d been dating Malcolm Hendry for almost three months. He was perfect for me. Kind, laid-back, tall – and
wealthy. Malcolm was the oldest of all my ‘sugar daddies’, as Joss jokingly called them. Although at thirty-nine, he was hardly
old
. He was, however, fifteen years my senior. I didn’t care. Convinced that he might be
the one
, I didn’t want Joss jeopardizing the progress of our relationship by insulting his good friend.

‘Jocelyn’ – Braden gripped her waist again, eyeing me and my growing panic – ‘I think it best if you practise the art of artifice tonight after all.’

Finally reading my expression, Joss placed a reassuring hand on my arm. ‘I’m kidding, Jo. I’ll be on my best behaviour. I promise.’

Joss made a sound at the back of her throat, but we both ignored it. My friend had made her opinion clear on my choice of boyfriend. She was convinced I was using Malcolm and he was using me. It was true that he was generous and I needed that generosity. However, the bigger truth was I really cared about him. Ever since my ‘first love’, John, when I was sixteen years old, I’d fallen for charming providers and the idea of security for me and Cole. But John had gotten fed up with playing second fiddle to my family, and after six months he’d dumped me.

It had taught me a valuable lesson.

It had also given me a new requirement in a boyfriend – he had to have a good job, be driven, hardworking, and have a good income. No matter how hard I worked, with my nonexistent qualifications and lack of any real talent, I was never going to make enough money to secure a stable
future for my family. I was, however, pretty enough to secure a
man
with good qualifications and talent.

A few year after I pieced myself back together from the heartbreak of my failed romance with John, Callum entered my life. Thirty, a well-off solicitor, gorgeous, cultured, sophisticated. Determined to make it last, I became what I imagined was the perfect girlfriend to him. It was a habit, becoming someone else, especially since it seemed to work. Callum thought I
was
perfect for a while. We were together two years – until my secretiveness about my family and my inability to ‘let him in’ drove too deep a wedge between us and he left me.

It took me months to scrape myself back together after Callum … and when I did, it was to run into the arms of Tim. Horrible decision. Tim worked for an investment company. He was so mind-numbingly self-absorbed that
I
actually dumped
him
. Then there was Steven. Steven was a sales director for one of these annoying door-to-door sales companies. He put in long hours, which I thought might work in our favour, but it didn’t. Joss thought Steven had dumped me because of my inability to be flexible about anything because of my family obligations. The truth was I dumped Steven. Steven made me feel worthless. His comments about my general uselessness brought back too many memories, and although even I thought there was little to recommend me other than my looks, when your boyfriend said the same and ultimately made you feel like a paid escort, it was time to call it quits.