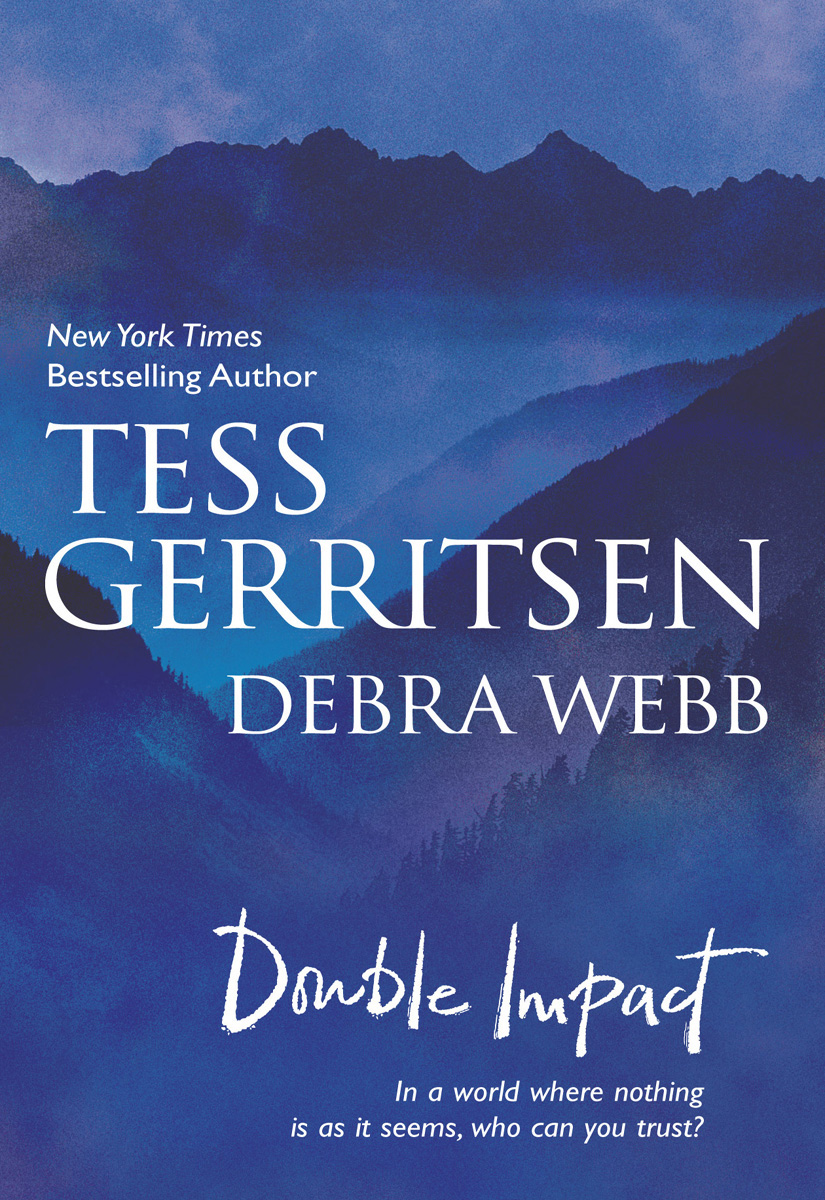 Praise for these bestselling authors:

“Thoroughly satisfyingâ¦
[Tess] Gerritsen
has morphed into a dependable suspense novelist whose growing popularity is keeping pace with her ever-finer writing skills.”

“Gerritsen fans know by now what to expect from her: a fascinating story with a gripping plot and believably human characters.”

“Tess Gerritsen knows how to keep readers on the edge of their seats.”

“Debra Webb's fast-paced thriller will make you shiver in passion and fear.”

is an accomplished woman with an interesting story. Once a practicing physician, she has chosen, instead, to write full-time. A woman of many talents, she even plays fiddle in a band! Tess has cowritten
Adrift,
a CBS screenplay, and has several other screenplays optioned by HBO. Having lived in Hawaii, she now resides in Camden, Maine, with her physician husband and two sons.

was born in Scottsboro, Alabama, to parents who taught her that anything is possible if you want it badly enough. She began writing at age nine. Eventually, she met and married the man of her dreams, and tried some other occupations, including selling vacuum cleaners, and working in a factory, a day-care center, a hospital and a department store. When her husband joined the military, they moved to Berlin, Germany, and Debra became a secretary in the commanding general's office. By 1985, they were back in the States, and finally moved to Tennessee, to a small town where everyone knows everyone else. With the support of her daughters, Debra took up writing again, looking to mystery and movies for inspiration. In 1998, her dream of writing for Harlequin came true. Now multipublished, Debra writes spine-tingling romantic suspense for Harlequin Intrigue and heartfelt love stories for Harlequin American Romance.

NO WAY BACK
Debra Webb

T
HIRTY MILES OUT
of Muong Sam, they saw the first tracers slash the sky.

Pilot William “Wild Bill” Maitland felt the DeHavilland Twin Otter buck like a filly as they took a hit somewhere back in the fuselage. He pulled into a climb, instinctively opting for the safety of altitude. As the misty mountains dropped away beneath them, a new round of tracers streaked past, splattering the cockpit with flak.

“Damn it, Kozy. You're bad luck,” Maitland muttered to his copilot. “Seems like every time we go up together, I taste lead.”

Kozlowski went right on chomping his wad of bubble gum. “What's to worry?” he drawled, nodding at the shattered windshield. “Missed ya by at least two inches.”

“One extra inch can make a
hell
of a lot of difference.”

Kozy laughed and looked out the window. “Yeah, that's what my wife tells me.”

The door to the cockpit swung open. Valdez, the cargo kicker, his shoulders bulky with a parachute pack, stuck his head in. “What the hell's goin' on anyâ” He froze as another tracer spiraled past.

“Got us some mighty big mosquitoes out there,” Kozlowski said and blew a huge pink bubble.

“They didn't say nothin' about no .57s. What kind of briefing did we get, anyway?”

Kozlowski shrugged. “Only the best your tax dollars can buy.”

Valdez leaned forward and confided, “Man, we got us one weird passenger back there.”

“I mean, this one's
really
strange. Got flak flyin' all 'round and he doesn't bat an eye. Just sits there like he's floatin' on some lily pond. You should see the medallion he's got 'round his neck. Gotta weigh at least a kilo.”

“I'm tellin' you, Kozy, he's got a kilo of gold hangin' around that fat little neck of his. Who is he?”

“That all they told you?”

“I'm just the delivery boy. Don't need to know any more than that.” Maitland leveled the DeHavilland off at eight thousand feet. Glancing back through the open cockpit doorway, he caught sight of their lone passenger sitting placidly among the jumble of supply crates. In the dim cabin, the Lao's face gleamed like burnished mahogany. His eyes were closed, and his lips were moving silently. In prayer? wondered Maitland. Yes, the man was definitely one of their more interesting cargoes.

Not that Maitland hadn't carried strange passengers before. In his ten years with Air America, he'd transported German shepherds and generals, gibbons and girlfriends.
And he'd fly them anywhere they had to go. If hell had a landing strip, he liked to say, he'd take them thereâas long as they had a ticket. Anything, anytime, anywhere, was the rule at Air America.

“Song Ma River,” said Kozlowski, glancing down through the fingers of mist at the lush jungle floor. “Lot of cover. If they got any more .57s in place, we're gonna have us a hard landing.”

“Gonna be a hard landing anyhow,” said Maitland, taking stock of the velvety green ridges on either side of them. The valley was narrow; he'd have to swoop in fast and low. It was a hellishly short landing strip, nothing but a pin scratch in the jungle, and there was always the chance of an unreported gun emplacement. But the orders were to drop the Lao VIP, whoever he was, just inside North Vietnamese territory. No return pickup had been scheduled; it sounded to Maitland like a one-way trip to oblivion.

“Heading down in a minute,” he called over his shoulder to Valdez. “Get the passenger ready. He's gonna have to hit the ground running.”

“He says that crate goes with him.”

“What? I didn't hear anything about a crate.”

“They loaded it on at the last minute. Right after we took on supplies for Nam Tha. Pretty heavy sucker. I might need some help.”

Kozlowski resignedly unbuckled his seatbelt. “Okay,” he said with a sigh. “But remember, I don't get paid for kickin' crates.”

Maitland laughed. “What the hell
do
you get paid for?”

His last words were cut off by a deafening blast that shattered Maitland's eardrums. The explosion sent Koz
lowskiâor what was left of Kozlowskiâflying backward into the cockpit. Blood spattered the control panel, obscuring the altimeter dial. But Maitland didn't need the altimeter to tell him they were going down fast.

“Kozy!” screamed Valdez, staring down at the remains of the copilot.
“Kozy!”

His words were almost lost in the howling maelstrom of wind. The DeHavilland shuddered, a wounded bird fighting to stay aloft. Maitland, wrestling with the controls, knew immediately that he'd lost hydraulics. The best he could hope for was a belly flop on the jungle canopy.

He glanced back to survey the damage and saw, through a swirling cloud of debris, the bloodied body of the Lao passenger, thrown against the crates. He also saw sunlight shining through oddly twisted steel, glimpsed blue sky and clouds where the cargo door should have been. What the hell? Had the blast come from
inside
the plane?

He screamed to Valdez, “Bail out!”

The cargo kicker didn't respond; he was still staring in horror at Kozlowski.

Maitland gave him a shove. “Get the hell
out
of here!”

Valdez at last reacted. He stumbled out of the cockpit and into the morass of broken crates and rent metal. At the gaping cargo door he paused. “Maitland?” he yelled over the wind's shriek.

Their gazes met, and in that split second, they knew. They both knew. It was the last time they'd see each other alive.

Valdez backed up a few steps. Then he launched himself out the cargo door.

Maitland didn't glance back to see if Valdez's parachute had opened; he had other things to worry about.

The plane was sputtering into a dive.

Even as he reached for his harness release, he knew his luck had run out. He had neither the time nor the altitude to struggle into his parachute. He'd never believed in wearing one anyway. Strapping it on was like admitting you didn't trust your skill as a pilot, and Maitland knewâeveryone knewâthat he was the best.

Calmly he refastened his harness and grasped the controls. Through the shattered cockpit window he watched the jungle floor, lush and green and heartwrenchingly beautiful, swoop up to meet him. Somehow he'd always known it would end this way: the wind whistling through his crippled plane, the ground rushing toward him, his hands gripping the controls. This time he wouldn't be walking awayâ¦.

It was startling, this sudden recognition of his own mortality. An astonishing thought.
I'm going to die.

And astonishment was exactly what he felt as the DeHavilland sliced into the treetops.

AT
1900
HOURS THE REPORT
came in that Air America Flight 5078 had vanished.

In the Operations Room of the U.S. Army Liaison, Colonel Joseph Kistner and his colleagues from Central and Defense Intelligence greeted the news with shocked silence. Had their operation, so carefully conceived, so vital to U.S. interests, met with disaster?

The command at Air America provided the details. Flight 5078, due in Nam Tha at 1500 hours, had never arrived. A search of the presumed flight pathâcarried on until darkness intervenedâhad revealed no sign of wreckage. But flak had been reported heavy near the border, and
.57-millimeter gun emplacements were noted just out of Muong Sam. To make things worse, the terrain was mountainous, the weather unpredictable and the number of alternative nonhostile landing strips limited.

It was a reasonable assumption that Flight 5078 had been shot down.

Grim acceptance settled on the faces of the men gathered around the table. Their brightest hope had just perished aboard a doomed plane. They looked at Kistner and awaited his decision.

“Resume the search at daybreak,” he said.

“That'd be throwing away live men after dead,” said the CIA officer. “Come on, gentlemen. We all know that crew's gone.”

Cold-blooded bastard,
thought Kistner. But as always, he was right. The colonel gathered together his papers and rose to his feet. “It's not the men we're searching for,” he said. “It's the wreckage. I want it located.”

Kistner snapped his briefcase shut. “We melt it.”

The CIA officer nodded in agreement. No one argued the point. The operation had met with disaster. There was nothing more to be done.

Except destroy the evidence.