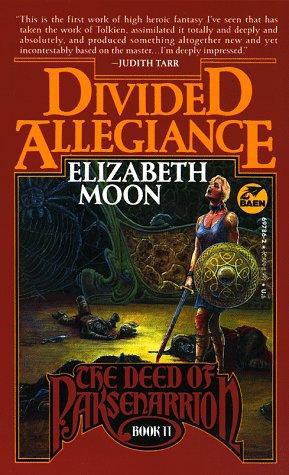 THE DEED OF PAKSENARRION
SheepFarmers Daughter - Book I
Divided Allegiance - Book II
Oath of Gold - Book III
This is a work of fiction. All the characters and events portrayed in this book are fictional, and any resemblance to real people or incidents is purely coincidental.

W
hen all Siniavaâ€™s troops had surrendered
, Kieri Phelanâ€™s troops assumed theyâ€™d be going back to Valdaireâ€”even, perhaps, to the north again. Some already had plans for spending their share of the loot. Others looked forward to time to rest and recover from wounds. Instead, a few days later they found themselves marching south along the Immer in company with Aluredâ€™s men, the Halverics, and several cohorts of the Duke of Fallâ€™s army. These last looked fresh as new paint, hardly having fought at all, except to turn Siniava away from Fallo.

P
aks leaned against the wall
breathing heavily. Her side ached, and she could feel a trickle of blood running down the side of her face. Her shield had broken; she pulled the straps free and dropped the pieces. Macenion had ripped a length of cloth from his tunic, and was wrapping the wound on his arm. As he moved, she caught a glimpse of the bright mail under his outer clothing.

N
ext morning she woke again
at dawn. This time Hebbinford seemed to expect her when she padded down the stairs and out to the stableyard. There she stretched and twisted, working the stiffness out of her shoulder. When Sevri came out, they fed the horses together, Paks stopped to watch the black horse eat. She wondered what would happen to it if its master died. She imagined herself riding away on itâ€”then wondered if she could even mount it.

The tailor, she found after breakfast, was away on a trip. â€œBuying cloth up at the Countâ€™s fair,â€

M
al, when ambros explained the plan,
seemed shrewder than Paks had expected. He spoke quietly enough, with a rumbling chuckle when amused. Paks began to think he might be an asset after all.

A
rgalt, when she finally located him again,
after losing herself in a maze of passages on the ground floor, looked her up and down. â€œTraining Master, eh? So youâ€™re going to become a Knight of Holy Gird, are you? Or a Marshal? Or is it paladin youâ€™re thinking of?â€

E
arly spring flowers were just fading
when Paksâ€™rode west up the first long slopes above Fin Panir. She still thought nothing could be more exciting. With the caravan, the yearâ€™s first, rode Amberion, High Marshals Connaught and Fallis, and four knights: Joris, Adan, and Pir, from the Order of the Cudgel, and Marek from the Order of Gird. A troop of men-at-arms marched with them, and a number of yeomen had signed on as drovers and camp workers. Most of the caravan was commercial, headed for Kaelifet, but Ardhiel and Balkon rode with the Girdish contingent as ambassadors and witnesses for their people.

Paks continued her training under the direction of the paladin and High Marshals. If she had thought the trip would provide a respite from study, she quickly learned otherwise. By the time they reached the Rim, a rough outcrop of stone that loomed across their path, visible a dayâ€™s journey away, Paks had passed their examinations on the Code of Gird and grange organization. She began learning the grange history of the oldest granges, the reasons for locating granges and bartons in certain places, the way that the Code of Gird was administered in grange courts and market courts in Fintha. Now she knew how the judicar was appointed in Rocky Ford, and why the required number of witnesses to a contract varied with the kind of contract.

Their encounter with the horse nomads was a welcome break. She had been marching along muttering to herself the names of the Marshal-Generals who had made changes in the Code when one of the Wagonmasterâ€™s sons came pelting along the line, crying a warning. As he neared the Girdsmen, he yelled â€œSir paladin! Sir paladin! Raiders!â€

A
circle of light centered the world.
Paks watched it change color: first golden yellow, then glowing orange like coals, then red, deepening to violet, then bursting into blue and white, then back to yellow. After some time, she wondered where and why and similar things. She was sure, looking at a circle of red, that it would darken to violet and blue, then burst into brilliant white. Distant sound disturbed her: ringing, as of bit chains, chain mail, herdbells. The crash of stone on stone, or steel on steel. Voices, speaking words she didnâ€™t know.

She opened her eyes at last to find a finger of sunlight across them, and blinked. She felt as light and empty as an eggshell. She had no wish to move, fearing pain or loss. A shadow crossed her vision: a shape she should know. A person. She felt the shifting of what she lay on, a draft of cooler air and easing of pressure. Something damp and cold touched her skin, then warm hands, then warmth returned. She blinked again, seeing, now, a Marshal she had met casually the previous winter, but did not know well. The face was remote, quiet, contained. Paks stared at it without intent. It was a puzzle she had to solve.

The face turned to hers; she saw the surprise on it, and wondered vaguely. â€œPaksenarrion! Youâ€™re awake?â€