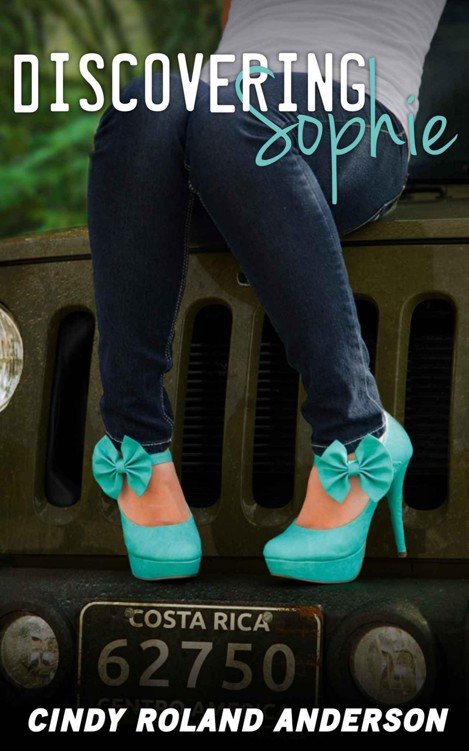 SAMPLE CHAPTER: "UNDER A GEORGIA MOON"

This is a work of fiction. The characters, names, places, incidents and dialogue are products of the author's imagination and are not to be construed as real.

No part of this book may be reproduced in any form whatsoever without prior written permission of the publisher except in the case of brief passages embodied in critical reviews and articles.

The scanning, uploading, and distribution of this book via the Internet or any other means without permission in writing from the publisher is illegal and punishable by law. Purchase only authorized electronic editions and do not participate in or encourage electronic piracy of copyrighted materials. Thank you for supporting the author’s rights.

For my parents Mitch and Reva Roland—thank you for always supporting me and for making me believe I could do anything I set my mind to. I love you both so much.

I have learned that writing wouldn’t be possible without the love and support of my family. So let me first give a huge thank you to my husband John and my two boys living at home, Jason and Matthew, for allowing me to write instead of doing other things like laundry, dishes and cooking. I guess I should also thank Little Caesars for feeding my neglected family.

A special thanks to my talented editor Sadie Anderson. Every revision she suggests always reflects my voice and I truly appreciate that! She also does an incredible job on the typesetting and formatting.

I also want to thank my son Tyler Anderson for being willing to read my romance manuscripts so I can have a male perspective.

Thank you to my beta readers Elise May, Stephanie Fuhriman, Lisa Ferguson, and Valerie Bybee. I am always so impressed by the different things each of them point out to help shape the story. I also want to express my gratitude to my critique group, Cindy Hogan, Jennifer Moore, Susan Tietjen, and Angela Woiwode. I’m lucky they let me into their talented circle and I value their friendship.

Thank you to my daughter Nicole Harbertson for once again being the cover model, and for looking great in a pair of heels. I think I’m having just as much fun buying the shoes for the book covers as she is wearing them.

I also want to thank Casey Harbertson for the incredible cover artwork. Seriously, words cannot express how grateful I am for his artistic ability. He is simply amazing and so gifted.

A special thanks to Dr. Matthew Feil, an emergency room doctor at Lakeview Hospital. He took the time to answer my questions about medications, lacerations and bullet wounds, all of which were greatly appreciated while writing this book. Any medical errors are completely mine.

Lastly, I want to thank my mom and dad for sharing their love of Costa Rica with me, and for answering my questions about such a beautiful place. I am blessed.

It
was love at first sight. Those baby blue eyes captured Sophie Kendrick’s heart the minute she looked into them. “Hey, sweetheart,” she said running her fingers through soft brown curls. “Don’t you look handsome today.”

The only reply she received was a firm tug on the stethoscope that hung around her neck, bringing her face close to skin scented with one of Sophie’s favorite smells—baby lotion.

Sophie smiled at the little boy and gently reclaimed her stethoscope, only to have chubby fingers grasp onto dark brown strands of her chin-length hair. Laughing, Sophie freed her hair and passed the child back to his mother. “He’s beautiful and perfectly healthy.”

“Thanks, Dr. Kendrick. I wasn’t sure if you’d remember us or not.”

“You’re welcome, and I do remember you.” Sophie caressed the little boy’s cheek. “I just can’t believe how much he’s grown.”

“Me either.” The mother cuddled the little boy close. “Well, we just wanted to stop and say hello.”

Sophie watched mother and child leave the Denver Children’s Hospital multipurpose room, grateful that a mere six months ago her steady hands had successfully repaired the baby’s defective small intestine a few days after his birth.

As a pediatric surgeon, she didn’t often get to see the kids she’d helped once they were healed. However, today the hospital was celebrating the opening of a new wing by throwing an open house for the public. It gave Sophie an opportunity to see some of the children she’d provided medical care for since she’d come to Colorado almost two years earlier.

Sophie surveyed the gathered crowd, noticing other doctors, hospital administrators, and a few notable donors among the community of patrons and former patients. She caught sight of her boyfriend, Peter Elliot, standing in the corner. He’d arrived an hour ago, greeted her briefly, and then excused himself to take a business call. She’d seen very little of him since that time.

As always, whenever she looked at Peter, she couldn’t help thinking how incredibly handsome he was. Dark wavy hair styled to perfection and a strong jaw line made him stand out in any crowd. Given the way his shoulders filled out his Armani suit, Peter fit the image of the successful attorney that he was.

Most of their acquaintances thought they were the perfect couple—a doctor and an attorney—and since both of them had dark hair and brown eyes, they were bound to have beautiful, dark-haired, intelligent children.

If only it were that simple.

While Sophie loved Peter, she wasn’t
in love
with him. It was crazy. Sophie longed to get married and start a family, and although Peter was a very sought after bachelor, she hadn’t been able to give him an answer when he’d asked her to marry him a couple of weeks ago.

The familiar pang of unease lodged in her chest as she continued to watch him. Peter had said he’d give her time, especially with everything that was going on in her life, but how long would he wait?

Before she looked away, Peter met her gaze and gave her an impatient look, then gestured toward his watch. He had wanted to leave thirty minutes ago. Knowing she’d made him wait long enough, she nodded her head and stooped down to pick up her purse.

A wave of dizziness made her start to lose her balance. As she straightened back up, Sophie drew in a long, cleansing breath and waited for the dizzy spell to pass. The weeks of sleepless nights were finally getting to her.

The nightmares had started a month ago. At first they only came once or twice a week. Now, each night when Sophie closed her eyes, the recurring dream would awaken her, remind her that her father was still missing and that she had no idea what had happened to him.

Sophie crossed the room, hoping she didn’t look as bad as she suddenly felt. She finger-combed the wispy layers in her hair, hoping it helped restore some of its style. Reaching inside her purse, she pulled out her tinted lip gloss. What she really needed was a shower, but she didn’t want to miss having dinner with the Elliot family.

As she approached Peter, a twinge of guilt pricked her conscience. She might not be madly in love with him, but she was completely in love with his family. His parents were wonderful people who loved being surrounded by their children and grandchildren.

The fact that she loved Peter more for his family than for him troubled her. But at the same time, while Peter had said he loved her, Sophie had a feeling his affection had more to do with her looks and her chosen profession. He had often said that dating a beautiful doctor was good for his image and that he loved having a girlfriend men envied him for.

Meeting Peter’s gaze, she could see his brown eyes no longer held irritation. Now he watched her with concern. “Are you okay?”

“Just a little dizzy.” She gave him what she hoped was a confident smile. “It’s been a long day.”

He reached out and took her hand in his. “Mom delayed dinner. I’m sure you’ll feel much better once you can sit down and eat.”

“She didn’t need to do that, but I appreciate it.” Mrs. Elliot’s consideration warmed Sophie’s heart.

Sophie leaned into Peter’s shoulder as they stepped onto the elevator. Maybe she did love him enough to marry him. He made her feel safe and protected.

She’d already been in a long-term relationship where passion had been the pervading element. That had ended four years ago when Sophie had finally realized David, her boyfriend at that time, never had any intention of marrying her. She’d given everything to David, much more than just her heart. In the process she’d distanced herself from God by letting go of her Christian faith and the values she’d always adhered to in her youth. When she had reaffirmed her faith and resumed attending church again, David hadn’t liked the changes in her—or their relationship. He had walked away without looking back.

How ironic for her to now be dating a great guy who shared her faith and wanted to marry her, yet she was the one who couldn’t commit. It didn’t make sense. She was an only child, and after her mother died when Sophie was eight years old, it was just her and her father. That’s why she loved being with Peter’s family. He had his parents, two sisters and two brothers—all of which were married—and nearly a dozen nieces and nephews. She wanted that for herself.

The first time Peter had taken her to a family dinner at his parents’ house, Sophie had been awestruck. She’d felt like Lucy—the Sandra Bullock character in
While You Were Sleeping
—when she had celebrated Christmas with her pretend fiancé’s family. Like Lucy, Sophie had taken everything in that day, loving the family interaction between the adults and children, the laughter and the incredible food. Peter’s parents and siblings had welcomed her with open arms, expressing how glad they were that he was dating someone like Sophie.

If she didn’t marry him, what were the chances she would find another guy with an amazing family who loved and accepted her like she belonged? She was so conflicted inside and desperately wanted to fall head-over-heels in love with Peter. Part of her believed those feelings would come if she stayed with him long enough.

For the time being, she told herself that she could hold off on her answer to Peter since her father seemed to be missing somewhere in the Costa Rican jungle. Although she and her father hadn’t been close, she’d made more of an effort to stay in touch with him over the last couple of years. Even so, it wasn’t unusual for her to not hear from him for two or even three months while he was doing research. She’d only begun to worry when four months had passed with still no word from him.

Concerned, Sophie had contacted the university and discovered they hadn’t heard from her father either. The department head had assured her they would look into it, and Sophie tried not to worry. Then, the nightmares had started, and Sophie sensed something had happened to him.

CANCER'S CAUSE, CANCER'S CURE by Morton Walker, DPM
Rockin' the Heart (Hot Wired) by Miller, Gracen
the Rider Of Lost Creek (1976) by L'amour, Louis - Kilkenny 02
The Case of the Killer Divorce by Barbara Venkataraman
The Gnostic Gospels by Elaine Pagels
The Vagrant by Newman, Peter
Colt by Nancy Springer
The Last Castle by Jack Holbrook Vance
Lipstick & Stilettos by Young, Tarra
The Guardian (The Gifted Book 1) by C. L. McCourt