Dinner With a Bad Boy 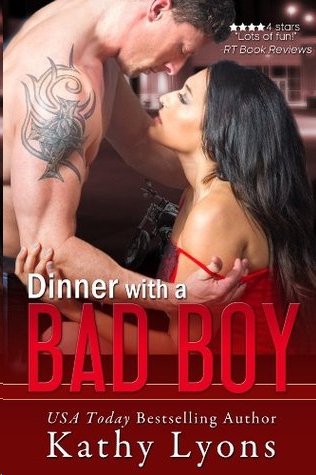 Dinner with a Bad Boy

By payment of required fees, you have been granted the
non
-exclusive,
non
-transferable right to access and read the text of this eBook. No part of this text may be reproduced, transmitted, downloaded, decompiled, reverse engineered, or stored in or introduced into any information storage and retrieval system, in any form or by any means, whether electronic or mechanical, now known or hereinafter invented without the express written permission of copyright owner.

This is a work of fiction. Names, characters, places, and incidents either are the product of the author's imagination or are used fictitiously, and any resemblance to actual persons, living or dead, business establishments, events or locales is entirely coincidental.

The reverse engineering, uploading, and/or distributing of this eBook via the internet or via any other means without the permission of the copyright owner is illegal and punishable by law. Please purchase only authorized electronic editions, and do not participate in or encourage electronic piracy of copyrighted materials. Your support of the author's rights is appreciated.

Copyright ©2012, 2013 by
Katherine Grill
. All rights reserved under International and Pan-American Copyright Conventions.

"I knew you wouldn't bring a date!" Su Ling's mother firmly pushed her outside the banquet room of Yen Ching's into a hallway filled with the scent of ginger and soy sauce. The elaborately carved paneling in her father's favorite restaurant darkened her mother's face into a forbidding scowl.

"I did bring a date," Su Ling teased, trying to fight the suffocating ambiance. "Me, myself, and I." She lowered her voice in mock seriousness. "It was a little rocky at first, because, between you and me, myself was getting a little uppity. But I got her under control after a swift kick."

Her mother's lips puckered into a tight ball of dark red lipstick. "This is why you do not have a husband. Your sense of humor is too confusing. Me and myself," she muttered as she shook her head. "Such nonsense."

Su Ling pressed her own lips together, unable to give voice to her frustration. She knew better than to speak to her family with anything but total seriousness and respect, but sometimes her irreverent side just got the better of her. Especially lately, when she felt a strange dissatisfaction with her boring accountant's life.

But tonight was her father's birthday party, and she needed to be respectful. So she lowered her gaze and spoke softly. "I'm sorry I didn't bring a date, but Ba Ba knows I'm single. He won't be shocked when his youngest daughter doesn't show up with a man." If anything, she thought with a grimace, her father would be stunned if she had brought someone. He'd thought her a marital lost cause when she turned twenty-five—three years ago.

Ma Ma threw up her hands, the gesture barely making it to Su Ling's shoulders. "Ai-yah, Su Ling. It is not for your father but his mother."

Her grandmother? "But she's in Hong Kong—"

"China, yes. What will she think of your father and me when her grandchildren have no men?" She didn't wait for Su Ling to respond, but rushed on without pause. "Never mind, never mind," she said as she pushed her daughter backward in the cramped hallway. "I knew you wouldn't bring anyone." Then she dropped her voice to a mysterious whisper. "I had another dream."

Su Ling did her best to hold back her groan. The last thing she needed was another of her mother's dream-inspired matches.

"Listen to me, Su Ling! You must find a dragon. That is the man for you."

"A dragon?" Su Ling bit her tongue. She shouldn't have said anything, shouldn't have encouraged her mother's latest delusion, but the question had just slipped out.

"Yes, yes," continued Ma Ma. "He must be born in a dragon year." Then she leaned forward, an excited gleam in her eye. "I have found him for you, Su Ling. He's waiting in the lobby. Your father's birthday dinner is the perfect time for everyone to meet him."

Su Ling stared at her mother with stunned horror. Ma Ma couldn't possibly expect Su Ling to meet another potential husband while her entire family sat around and watched? "I can't meet him now!" she whispered urgently. "Not in front of everyone." If it were up to her she wouldn't meet him at all, but then, she'd grown accustomed to doing things just to please her family.

"Do not be rude!" Ma Ma snapped. "Everyone wants to see him. I told them you have been dating for months." Then she lightened her tone to an irritating wheedle. "He is a professional. Very smart. An accountant like you. For taxes."

Su Ling rolled her eyes. She knew accountants. She
was
an accountant. And not one, Chinese or otherwise, had ever been a fun date. The heel of her dark pumps caught in the Chinese restaurant's faded carpet as Ma Ma pushed her toward the lobby. "Please don't make me—" she began, but her mother interrupted.

"He's waiting. Third chair from the right." Then, with a last shove, her mother slipped away back into the banquet room, where all the relatives waited to inspect Su Ling's newest mystery man.

Su Ling just stood there, her anger rising by slow degrees. She'd allowed this to happen, she told herself. She'd been polite to her mother's endless stream of eligible bachelors, and thereby tacitly encouraged her to further excesses. Su Ling moved around a potted plant to look at her mother's dragon choice, involuntarily wincing when she saw him. Another baby-faced Asian man in a boring suit and tie, obviously polite by the way he sat perfectly still in his chair, his hands folded primly in front of him. In short, an uptight mama's boy even though he was probably in his thirties.

That was when she saw the other one. Just now, his ordering take-out food in a whiskey voice sent shivers down her spine. She couldn't see him completely, but her gaze snagged on the bright Chinese dragon embroidered across his black leather jacket. A closer look revealed shaggy hair and a gold dagger dangling from his very Caucasian ear. Normally she wouldn't give this man a second glance, but her intemperate mood still simmered, spawning an evil thought. After all, Ma Ma had said her husband-to-be would be a dragon.

She must have made a sound, a soft whisper of mischief or simple admiration, because this dragon man turned and looked directly at her, one dark slash of an eyebrow raised in surprise. She looked away, pretending to inspect the menu displayed nearby, but out of the corner of her eye she watched a smile curve his lips as he leaned back against the counter. If she hadn't been surreptitiously watching him, she never would have known how slowly and leisurely he inspected her body from the top of her high bun down her trim navy suit to her legs as they extended beneath her short skirt. Nor would her skin have tingled with a sensual awareness she'd never experienced before.

Phobic by Cortney Pearson
Snow Melts in Spring by Deborah Vogts
Exclusive Access by Ravenna Tate
The Rose Bride by Nancy Holder
Lady of Mercy (The Sundered, Book 3) by Michelle Sagara West
V-Day by annehollywriter
Kiss at Your Own Risk by Stephanie Rowe
Better than Perfect by Simone Elkeles
The Game of Fates by Joel Babbitt
Fox Rematch (The Madison Wolves Book 10) by Robin Roseau