Read Dimanche and Other Stories Online

Dimanche and Other Stories 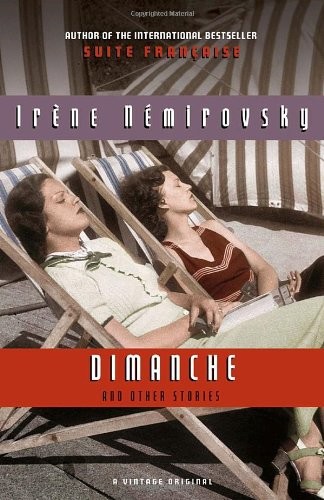 IRÈNE NÉMIROVSKY
Dimanche and Other Stories

Irène Némirovsky was born in Kiev in 1903 into a wealthy banking family and immigrated to France during the Russian Revolution. After attending the Sorbonne in Paris, she began to write and swiftly achieved success with
David Golder
, which was followed by more than a dozen other books. Throughout her lifetime she published widely in French newspapers and literary journals. She died in Auschwitz in 1942. More than sixty years later,
Suite Française
was published posthumously for the first time in 2006.

Fire in the Blood

IN RUE LAS CASES IT WAS AS QUIET AS DURING THE
height of summer, and every open window was screened by a yellow blind. The fine weather had returned: it was the first Sunday of spring, a warm and restless day that took people out of their houses and out of the city. The sky glowed with a gentle radiance. The birds in Place Sainte-Clotilde chirped lazily, while the raucous screeching of cars leaving for the country echoed in the peaceful streets. The only cloud in the sky was a delicately curled white shell that floated upward for a moment, then melted into the ether. People raised their heads with surprise and anticipation; they sniffed the air and smiled.

Agnes half-closed the shutters: the sun was hot and the roses would open too quickly and die. Nanette ran in and stood hopping from one foot to the other.

Mass was almost over. The children were already coming down the street in their bright sleeveless dresses, holding their prayer books in their white-gloved hands and clustering around a little girl who had just taken her first communion. Her round cheeks were pink and shining under her veil. A procession of bare legs, all pink and gold, as downy as the skin of a peach, sparkled in the sunshine. The bells were still ringing, slowly and sadly as if to say, “Off you go, good people, we are sorry not to be able to keep you any longer. We have sheltered you for as long as we could, but now we have to give you back to the world and to your everyday lives. Time to go. Mass is over.”

The bells fell silent. The smell of hot bread filled the street, wafting up from the open bakery; you could see the freshly washed floor gleaming and the narrow mirrors on the walls glinting faintly in the shadows. Then everyone had gone home.

Agnes said, “Nanette, go and see if Papa is ready, and tell Nadine that lunch is on the table.”

Guillaume came in, radiating the scent of lavender water and good cigars, which always made Agnes feel slightly nauseated. He seemed even more high-spirited, healthy, and plump than usual.

As soon as they had sat down, he announced, “I’ll be going out after lunch. When you’ve been suffocating in Paris all week, it’s the least … Are you really not tempted?”

“I don’t want to leave the little one.”

Nanette was sitting opposite him, and Guillaume smiled at her and tweaked her hair. The previous night she had had a temperature, but it had been so slight that her fresh complexion showed no sign of pallor.

“She’s not really ill. She has a good appetite.”

“Oh, I’m not worried, thank God,” said Agnes. “I’ll let her go out until four o’clock. Where are you going?”

Guillaume’s face visibly clouded over. “I … oh, I don’t know yet … You always want to organize things in advance … Somewhere around Fontainebleau or Chartres, I’ll see, wherever I end up. So? Will you come with me?”

“I’d love to see the look on his face if I agreed,” thought Agnes. The set smile on her lips annoyed her husband. But she answered, as she always did, “I’ve got things to do at home.”

She thought, “Who is it this time?”

Guillaume’s mistresses: her jealousy, her anxiety, the sleepless nights, were now in the long-distant past. He was tall and overweight, going bald, his whole body solidly balanced, his head firmly planted on a thick, strong neck. He was forty-five, the age at which men are at their most powerful, dominant, and self-confident, the blood coursing thickly through their veins. When he laughed he thrust his jaw forward to reveal a row of nearly perfect white teeth.

“Which one of them told him, ‘You look like a wolf
or a wild animal when you smile’?” wondered Agnes. “He must have been incredibly flattered. He never used to laugh like that.”

She remembered how he used to weep in her arms every time a love affair ended, gulping as if he were trying to inhale his tears. Poor Guillaume …

She started each sentence like that. It was impossible to detect a single word or a single idea in anything she thought or said that did not relate to herself, her clothes, her friends, the ladders in her stockings, her pocket money, her own pleasure. She was … triumphant. Her skin had the pale, velvety brightness of jasmine and of camellias, and you could see the blood beating just beneath the surface: it rose girlishly in her cheeks, swelling her lips so that it looked as though a pink, heady wine was about to gush from them. Her green eyes sparkled.

“She’s twenty,” thought Agnes, trying, as so often, to keep her eyes closed and not to be wounded by her daughter’s almost overwhelming beauty, the peals of laughter, the egoism, the fervor, the diamondlike hardness. “She’s twenty years old; it’s not her fault … Life will tame her, soften her, make her grow up.”

“And where are you going?”

“Mama, you know perfectly well! To Chantal Aumont’s house in Saint-Cloud. Arlette is coming to
fetch me. Can I come home late? After eight o’clock, anyway? You won’t be angry? Then I won’t have to go through Saint-Cloud at seven o’clock on a Sunday evening.”

Lunch was nearly over. Mariette was serving the meal quickly. Sunday … As soon as the washing-up was done, she, too, would be going out.

The clattering of dishes could be heard through the open windows: it was only a faint sound from the dark ground-floor flat where two spinsters lived in the gloom, but it was louder and livelier in the house across the way, where there was a table laid for twelve with the place settings gleaming on the neat folds of the damask tablecloth and a basket of white roses for a first communion decorating the center.

Guillaume swallowed his quickly and silently. Mariette began to clear the table.

“What a hurry they’re in,” thought Agnes, as her thin, skillful hands deftly folded Nanette’s napkin. “Only I …”

She was the only one for whom this wonderful Sunday held no attraction.

“I never imagined she’d become so stay-at-home and
dull,” thought Guillaume as he looked at her. He took a deep inward breath and, proudly conscious of the sense of vigor that surged through his body, felt his chest expand with the fine weather. “I’m in rather good shape, holding up surprisingly well,” he thought, as his mind turned to all the reasons (the political crisis, money worries, the taxes he owed, Germaine—who cramped his style, devil take her) why he could justifiably feel as miserable and depressed as anyone else. But on the contrary! “I’ve always been the same. A ray of sunshine, the prospect of a Sunday away from Paris, a nice bottle of wine, freedom, a pretty woman at my side—and I’m twenty again! I’m alive,” he congratulated himself, looking at his wife with veiled hostility; her cold beauty and the tense, mocking line of her lips irritated him. He said aloud, “Of course, I’ll telephone you if I spend the night in Chartres. In any case, I’ll be back tomorrow morning, and I’ll drop in at home before I go to the office.”

Agnes thought, with a strange, weary detachment, “One day, after a lavish lunch, just as he’s kissing the woman he’s with, the car he’s driving will crash into a tree. I’ll get a phone call from Senlis or Auxerre. Will you suffer?” she demanded curiously of the mute, invisible image of herself waiting in the shadows. But the image, silent and indifferent, did not reply, and the powerful silhouette of Guillaume came between it and her.

Then Guillaume was gone.

“Shall I lay tea in the parlor, madame?” asked Mariette.

Agnes stroked Nanette’s smooth, black hair, as the little girl first hid in the folds of her dress and then poked her head out giggling.

“We’ll be perfectly happy, just the two of us, sweetheart.”

Meanwhile, in her room, Nadine was quickly changing her clothes, powdering her neck, her bare arms, and the curve of her breast where, unseen in the car, Rémi had placed his dry, passionate lips, caressing her with quick, burning kisses. Half past two … Arlette still had not arrived. “With Arlette here, Mama won’t suspect anything.” The rendezvous was at three. “To think that Mama doesn’t notice anything. And she was young once …” she thought, trying in vain to imagine her mother’s youth, her engagement and her early married life.

“She must always have been like this. Everything
calm, orderly, wearing those white lawn collars. ‘Guillaume, don’t spoil my roses.’ Whereas I …”

She shivered, gently biting her lips as she looked at herself in the mirror. Nothing gave her more pleasure than her body, her eyes, her face, and the shape of her young, white neck as straight as a column. “It’s wonderful to be twenty,” she thought fervently. “Do all young women feel as I do, do they relish their happiness, their energy, the fire in their blood? Do they feel these things as fiercely and deeply as I do? For a woman, being twenty in 1934 is … is incredible,” she told herself.

She summoned up disjointed memories of nights on a campsite, coming back at dawn in Rémi’s car (and there were her parents thinking she was on an innocent trip with her friends on the Île Saint-Louis, watching the sun rise over the Seine), skiing, swimming, the pure air and cold water on her body, Rémi digging his nails into her neck, gently pulling back her short hair. “And my parents are blind to it all! I suppose in their day … I can imagine my mother at my age, at her first ball, her eyes modestly lowered. Rémi … I’m in love,” she told her reflection, smiling into the mirror. “But I must be careful of him—he’s so good-looking and so sure of himself. He’s been spoiled by women, by flattery. He must like making people suffer. But then, we’ll see who’ll be the strongest,” she muttered, as she nervously clenched her fists, feeling her love pounding in her heart, making her long to take part in this game of cruelty and passion.

She laughed out loud. And her laugh rang out so clearly and arrogantly in the silence that she stopped to listen, as if enchanted by the beauty of a rare and perfect musical instrument.

“There are times when I think I’m in love with myself more than anything else,” she thought, as she put on her green necklace, every bead of which glimmered and reflected the sun. Her smooth, firm skin had the brilliant glow of young animals, flowers, or a blossom in May, a glossiness that was fleeting but completely perfect. “I shall never be as beautiful again.”

She sprayed perfume on her face and shoulders, deliberately wasting it; today anything sparkling and extravagant suited her! “I’d love a bright red dress and gypsy jewelry.” She thought of her mother’s tender, weary voice: “Moderation in all things, Nadine!”