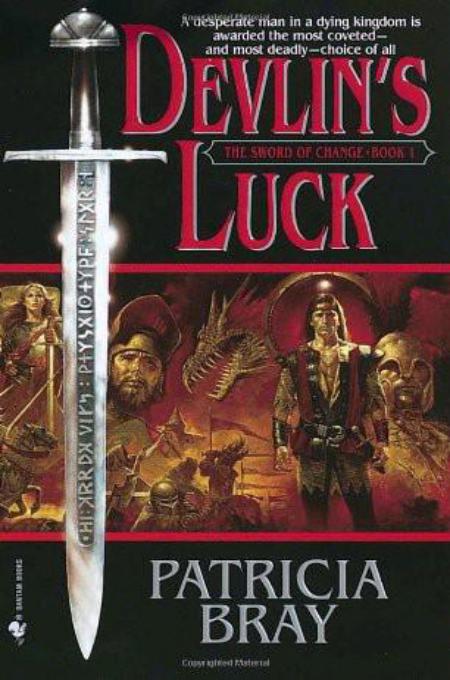 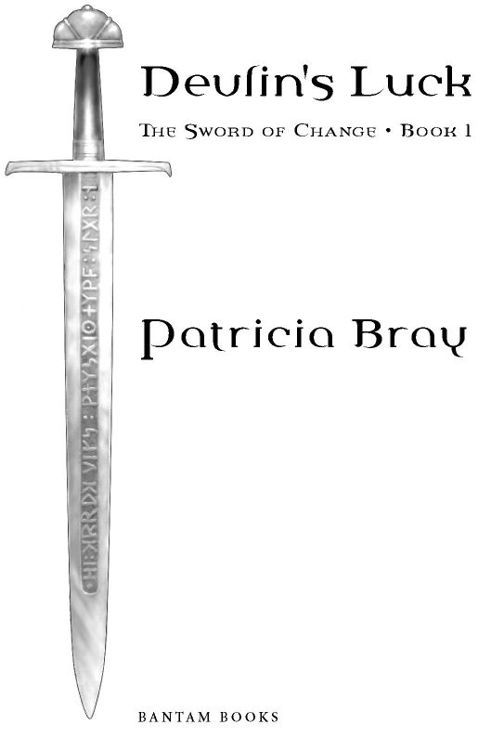 Devlin drew a deep breath. “I call on Lord Kanjti as witness to my oath, and patron of my Choosing.” As Devlin repeated the final phrase, a wisp of cold fire ran down the sword, then seemed to go through his arm and into his body. For a heartbeat his entire body was filled with icy fire. And then it was gone, and he felt nothing save the start of a throbbing ache in his head.

All was silent. Master Dreng had finished his chant and now regarded Devlin with a faintly quizzical look on his face.

Devlin lowered the sword. “Is it over?” He felt cheated, though he did not know why.

“It’s done,” the priest replied, sparing barely a moment to glance at Devlin before returning his attention to the altar. “You are now the Chosen One, champion of the Gods, defender of the Kingdom and its people, until your death.”

From the sound of him he expected that Devlin would not last a week.

To the two Jennifers

Jennifer Dunne, an extraordinary friend who set my feet on this path when she told me it was time to stop dreaming and to begin writing the stories that were inside me. Through the years Jennifer has always been there, providing encouragement, endless hours of critiquing, manning the 1-800-plot-help line, and administering chocolate during the rough spots. I owe her more than I can ever hope to repay.

And to my agent Jennifer Jackson, who believed in this project, and helped make this dream happen. 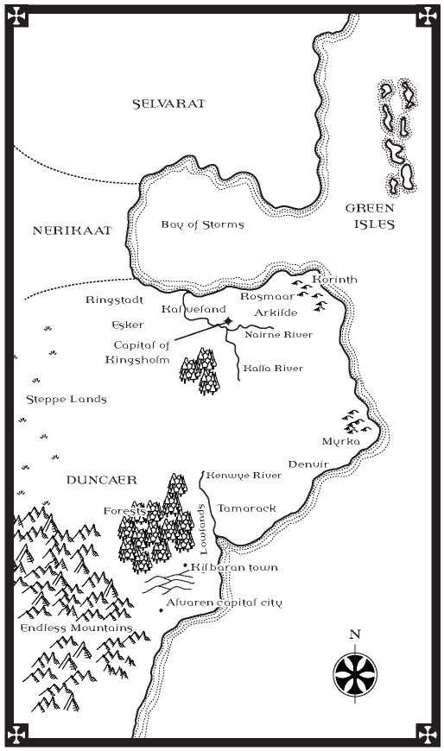 THE STRANGER ENTERED KINGSHOLM ON THE THIRD and final day of the midsummer festival. Lesser versions of the festival were celebrated throughout the Kingdom of Jorsk, but here in the capital city, the residents threw themselves into the celebration with an almost maniacal glee.

There was much to celebrate. Under the wise leadership of King Olafur, the residents of Kingsholm had enjoyed another year of peace and prosperity. Only the most bitter and contrary of the elders tried to dampen the celebration by pointing out that in times not so long ago peace and prosperity had been enjoyed throughout the Kingdom. Now, scarce a month went by that they did not hear tales of hardship from the distant corners of Jorsk, stories of failed harvests, attacking marauders, or uncanny plagues. But since these evils had yet to touch the lives of those who lived in the capital, they were deemed of little consequence.

At first the stranger, too, appeared of little consequence. He might have been any trader or farmer, come to Kingsholm to take part in the great celebration. But he did not mingle with the crowds, instead passing through them as if they held no power to touch him.

Devlin Stonehand regarded the celebrating townsfolk with a mix of impatience and dismay. In other circumstances he would have chosen to wait outside the city for another day, until the festival was concluded. But the choice was not his. Without coin in his pocket there was no inn where he could sleep or tavern that would feed him. He had not eaten in two days, and now he had a choice between begging in the streets or going forward to discover whatever fate awaited him at the palace.

As he stepped around a crowd of drunken revelers, Devlin could not help thinking how different it would be in his own country of Duncaer. There any stranger would find himself welcomed for the festival, and offered hospitality. His weeks of travel had taught him not to expect similar treatment in Jorsk.

Kingsholm was the most famous city of the realm, and drew people from all corners of the world. It was said that Kingsholm was not one city but three, consisting of the outer city, the old inner city, and finally the palace. Each was contained within the other, yet still held its own separate identity.

The outer city had sprung up around the walls of Kingsholm, as the population swelled beyond what the old city could hold. The nobles had left the inner city to build their grand houses on the north hill. To the east lay the residences of the merchants and most respected of the artisans. The south and west sides were given over to commerce, warehouses, and the large squares where markets and bazaars were held. It was here that the most raucous celebrations were to be found, and it was this quarter that he must cross on his way to the inner city.

Devlin wended his way through the crowds. He made a few wrong turns, and once had to retrace his steps to avoid a religious procession. But he was not lost. From any square he could look north to glimpse the white spires that marked his destination.

A granite wall marked the start of the old city. There was a gate, but no guards stood watch and the gate seemed permanently fixed open. Passing under the arch into the cobbled streets beyond, Devlin was struck at once by the change. Unlike the outer city of wood and brightly painted plaster, the buildings of the inner city were imposing edifices, made of gray-and-white stone. They were well built but had a dingy air, as if the buildings themselves knew that time and fashion had passed them by.

There were fewer people on the streets here, and those he saw did not seem to be actively celebrating.

Devlin paused to get his bearings. With the stone buildings looming over him, he could no longer see the spires of the palace.

An elderly woman followed him through the gates, then stopped. “Lost are you?” she asked.

The woman regarded Devlin skeptically. “You are not here for the festival.”

It was an easy deduction. Devlin had been traveling for near three months, and his cloak and boots showed every mile of his journey.

Devlin could make no guess as to the woman’s station. She appeared well-groomed, but he knew too little of the city to guess whether her clothes were fashionable attire or merely the livery of service.

“I need to find the palace,” Devlin finally admitted.

The woman regarded him critically. “Of course,” she said, with a decisive nod. “Dressed for hard travel, and not a smile on your face nor a glass of summer wine in your hand. It must be grim news indeed that make you seek the help of the Chosen One.”

Devlin did not respond. Let her guess what she would. He had no desire to explain himself to her, or to anyone. He bent his head in courteous dismissal, and made as if to move off.

She stopped him, laying one hand on his arm, her eyes now filled with pity. “I did not mean to offend you. There is no Chosen in the city now. But if you go to the palace and ask for Captain Drakken, she will give you what help she may. Just follow this street till you reach the square of the fountain. Take the right-hand lane leading out of the square. Pass the Temple of the Heavenly Couple, then take your second left turning. It will be a wide boulevard and take you straight up to the palace.”

“Thank you,” he said stiffly.

He passed through two smaller squares before he found the large square with a fountain. Ornate residences surrounded the square, and from behind their high walls he could hear music and laughter and the sounds of families gathered in celebration.

He began walking more quickly, eager to have this journey over. He found the boulevard, just as the woman had said. It was paved with white stone blocks that looked freshly swept. Strange trees with golden leaves lined either side of the wide roadway, which led up the hill to the palace.

The Hearts of Dragons by Josh Vanbrakle
Truth Or Dare by Lori Foster
Crimson Footprints lll: The Finale by Pugh, Shewanda
Sterling by Emily June Street
Shadows of the Pomegranate Tree by Tariq Ali
Under the Mistletoe with John Doe by Judy Duarte
Babe by Joan Smith
The de Valery Code by Darcy Burke
Zero Sight by B. Justin Shier
Don't Ever Tell by Brandon Massey