Read Devil in a Kilt Online

Authors: Devil in a Kilt

Devil in a Kilt 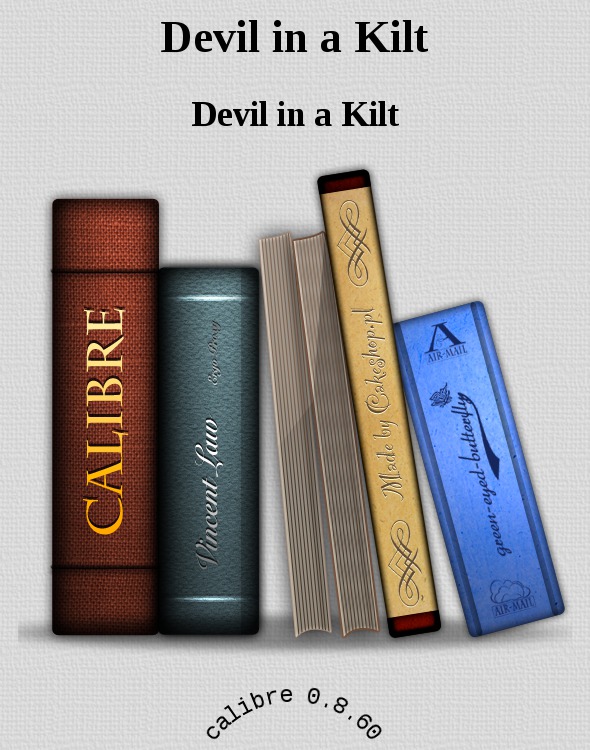 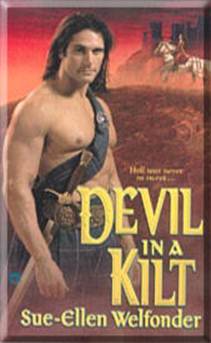 Devil in a Kilt

"
‘Tis said he's merciless, the devil's own spawn." Elspeth Beaton, unspoken
seneschal of the MacDonnell keep, folded her arms over her substantial girth
and glowered at her laird, Magnus MacDonnell. "You canna send the lass to
a man known to have murdered his first wife in cold blood!"

Magnus took another swig of ale, seemingly unaware
that most of the frothy brew dribbled into his unkempt beard. He slammed his
pewter mug onto the high table and glared back at his self-appointed
chamberlain.

"I
dinna care if Duncan MacKenzie is the devil hisself or if the bastard's killed
ten
wives. He's offered for Linnet, and ‘Tis an offer I canna refuse."

"You
canna give your daughter to a man said to possess neither heart nor
soul." Elspeth's voice rose with each word. "I willna allow it."

Magnus
guffawed.
"You
willna allow it? You overstep yerself, woman! Watch
yer mouth, or I'll send you along with her."

High
above the great hall, safely ensconced in the laird's lug, a tiny spy chamber
hidden within Dundonnell's thick walls, Linnet MacDonnell peered down at her
father and her beloved servant as they argued over her fate.

A
fate already decided and sealed.

Not
until this moment had she believed her sire would truly send her away,
especially not to a
MacKenzie.
Though none of her six older sisters had
married particularly well, at least her da hadn't plighted a single one of
them to the enemy! Straining her ears, she waited to hear more.

"‘Tis
rumored the MacKenzie is a man of strong passions," Elspeth pronounced.
"Linnet knows little of a man's baser needs. Her sisters learned much from
their mother, but Linnet is different. She's e'er run with her brothers,
learning their—"

"Aye,
she's different!" Magnus raged. "Naught has plagued me more since the
day my poor Innes died birthing her."

"The
lass has many skills," Elspeth countered. "Mayhap she lacks the grace
and high looks of her sisters and her late mother, may the saints bless her
soul, but she would still make a man a good wife. Surely you can purvey her a
more agreeable marriage? One that won't so sorely imperil her happiness?"

"Her
happiness matters naught to me. The alliance with MacKenzie is sealed!"
Magnus thundered. "Even if I wished her better, what man needs a wife who
can best him at throwing blades? And dinna wax on about her other fool
talents."

Magnus
took a long swill of ale, then wiped his mouth on his sleeve. "A man wants
a consort interested in tending his aching tarse, not a patch of scraggly
herbs!"

A
shocked sputter escaped Elspeth's lips and she drew herself to her full but
unimpressive height. "If you do this, you needn't tax yourself by
banishing me from the dubious comforts of this hall. ‘Tis gladly I shall go.
Linnet will not be sent to the lair of the Black Stag alone. She'll need
someone to look out for her."

Linnet's
heart skipped a beat, and gooseflesh rose on her arms upon hearing her
soon-to-be husband referred to as the Black Stag. No such creature existed.
While animals of certain prowess often adorned coats of arms and banners, and
some clan chieftains called themselves after a lion or other such noble beast,
this title sounded ominous.

An
omen of ill portent.

But
one she had little time to consider. Rubbing the chillbumps from her arms,
Linnet pushed aside her rising unease and concentrated on the discourse below.

"
‘Tis glad I'll be to see your back," her father was ranting. "Your
nagging willna be missed."

"Will
you not reconsider, milord?" Elspeth changed her tactic. "If you send
Linnet away, who will tend the garden or do the healing? And dinna forget how
oft her gift has aided the clan."

"A
pox on the garden and plague take her gift!" Magnus bellowed. "My
sons are strong and healthy. We dinna need the lass and her herbs. Let her aid
the MacKenzie. ‘Tis a fair exchange since he only wants her for her sight.
Think you he offered for her because she's so
bonnie?
Or because the
bards have sung to him of her womanly allures?"

The
MacDonnell laird's laughter filled the hall. Loud and mean-spirited, it bounced
off the walls of the laird's lug, taunting Linnet with the cruelty behind his words.
She cringed. Everyone within the keep would hear his slurs.

"Nay,
he doesna seek a comely wife," Magnus roared, sounding as if he were about
to burst into another gale of laughter. "The mighty MacKenzie of Kintail
isn't interested in her looks or if she can please him or nay when he beds her.
He wants to know if his son is his own or his half brother's bastard, and he's
willing to pay dearly to find out."

Elspeth
gasped. "You know the lass canna command her gift at will. What will
happen to her if she fails to see the answer?"

"Think
you I care?" Linnet's father jumped to his feet and slammed his meaty
fists on the table. " ‘Tis glad I am to be rid of her! All I care about
are the two MacDonnell kinsmen and the cattle he's giving in exchange for her.
He's held our clansmen for nigh onto six months. Their only transgression was a
single raid!"

Magnus
MacDonnell's chest heaved in indignation. " ‘Tis a dullwit you are if you
do not realize their sword arms and strong backs are more use to me than the
lass. And MacKenzie cattle are the best in the Highlands." He paused to
jeer at Elspeth. "Why do you think we're e'er a-lifting them?"

"You'll
live to rue this day."

"Rue
the day? Bah!" Magnus leaned across the table, thrusting his bearded face
forward. "I'm hoping the boy
is
his half brother's brat. Think how
pleased he'll be if he gets a son off Linnet. Mayhaps grateful enough to reward
his dear father-in-law with a bit o' land."

"The
saints will punish you, Magnus."

Magnus
MacDonnell laughed. "I dinna care if a whole host of saints come after me.
This marriage will make me a rich man. I'll hire an army to send the sniveling
saints back where they came from!"

"Perhaps
the arrangement 'twill be good for Linnet," Elspeth said, her voice
surprisingly calm. "I doubt the MacKenzie partakes of enough ale each time
he sits at his table to send himself sprawling facefirst into the rushes. Not
if he's the fine warrior the minstrels claim."

Elspeth
fixed the laird with a cold stare. "Have you ne'er listened when the bards
sing of his great valor serving our good King Robert Bruce at Bannockburn?
‘Tis rumored the Bruce hisself calls the man his champion."

"Out!
Get you gone from my hall!" Magnus MacDonnell's face turned as red as his
beard. "Linnet leaves for Kintail as soon as Ranald has the horses
saddled. If you want to see the morn, gather your belongings and ride with
her!"

Peering
through the spy hole, Linnet watched her beloved Elspeth give Magnus one last
glare before she stalked from the hall. The instant her old nurse disappeared
from view, Linnet leaned her back against the wall and drew a deep breath.

Everything
she'd just heard ran wild through her mind. Her da's slurs, Elspeth's attempts
to defend her, and then her unexpected praise for Duncan MacKenzie. Heroic acts
in battle or nay, he remained the enemy.

But
what disturbed Linnet the most was her own odd reaction when Elspeth had called
the MacKenzie a man of strong passions. Even now, heat rose to her cheeks at
the thought. She was embarrassed to admit it, even to herself, but she yearned
to learn about passion.

Linnet
suspected the tingles that had shot through her at the notion of wedding a man
of heated blood had something to do with such things. Most likely so did the
way her heart had begun to thump fiercely upon hearing Elspeth's words.

Linnet's
cheeks grew warmer... as did the rest of her body, but she fought to ignore the
disquieting sensations. She didn't want a MacKenzie to bestir her in such a
manner. Imagining how her da would laugh if he knew she harbored dreams of a
man desiring her chased away the last vestiges of her troublesome thoughts.

Resignation
tinged by anger settled over her. If only she had been born as fair as her
sisters. Lifting her hand, she ran her fingertips over the curve of her cheek.
Though cold to the touch, her skin was smooth, unblemished. But while her
sisters had been graced with milky white complexions, a smattering of freckles
marred hers.

And
unlike their hair, always smooth and in place, she'd been burdened with a wild
mane she couldn't keep plaited. She did like its color, though. Of a bolder
tone than her sisters' blondish red, hers was a deep shade of copper, almost
bronze. Her favorite brother, Jamie, claimed her hair could bewitch a blind
man.

A
tiny smile tugged at her lips. Aye, she liked her hair. And she loved Jamie.
She loved each of her eight brothers, and now she could hear them moving
through the hall below. Even as her father's drunken snores drifted up to her,
so did the sounds of her brothers making ready for a swift departure.

Her
departure from Dundonnell Castle. The dark and dank hall of a lesser and
near-landless clan chief, her ale-loving da, but the only home she had ever
known.

And
now she must leave for an uncertain future, her place at Dundonnell wrested
from her by her father's greed. Tears stung Linnet's eyes, but she blinked them
away, not wanting her da to see them should he stir himself and deign to look
at her as she exited his hall.

Squaring
her shoulders, Linnet snatched up her leather herb pouch, her only valued
possession, and slipped from the laird's lug. She hurried down the tower stairs
as quickly as she dared, then dashed through the great hall without so much as
a glance at her slumbering da.

For
the space of a heartbeat, she'd almost hesitated, almost given in to a
ridiculous notion she should awaken him and bid him farewell. But the urge
vanished as quickly as it'd come.

Why
should she bother? He'd only grouse at her for disrupting his sleep. And was he
not pleased to be rid of her? Worse, he'd sold her to the laird of the
MacKenzies,
the MacDonnells' sworn enemies since long before her birth.

And
the man, king's favorite and strong-passioned or nay, only wanted her for the
use of her gift and because he'd been assured she wasn't bonnie. Neither
prospect was flattering nor promised an endurable marriage.

Linnet
took one last deep gulp of Dundonnell's smoke-hazed air as she stood before the
massive oaken door leading to the bailey. Mayhap in her new home she wouldn't
be suffered to fill her lungs with stale, ale-soured air. "Oh, bury St.
Columba's holy knuckles!" she muttered, borrowing Jamie's preferred
epithet as she dashed a wayward tear from her cheek.

Before
more could fall, Linnet yanked open the iron-shod door and stepped outside.
Though long past the hour of prime, a chill, blue-gray mist still hung over
Dundonnell's small courtyard... just as a pall hung over her heart.

Her
brothers, all eight of them, stood with the waiting horses, each brother
looking as miserable as she felt. Elspeth, though, appeared oddly placid and
already sat astride her pony. Other clansmen and their families, along with her
da's few servants, crowded together near the opened castle gates. Like her
brothers, they all wore sullen expressions and remained silent, but the
telltale glisten in their eyes spoke a thousand words.