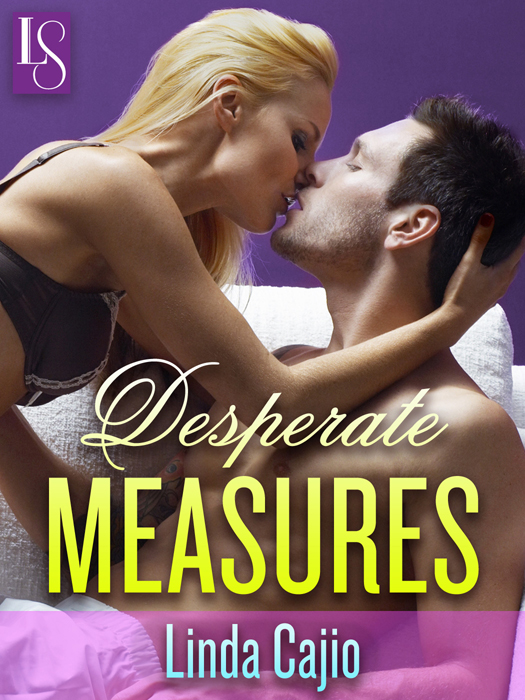 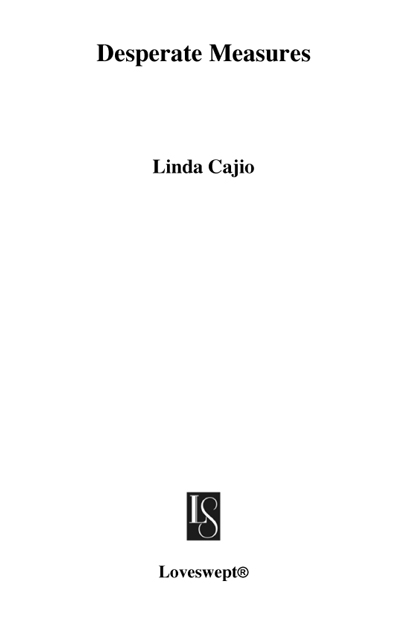 Desperate Measures
is a work of fiction. Names, places, and incidents either are products of the author’s imagination or are used fictitiously.

Published in the United States by Loveswept, an imprint of The Random House Publishing Group, a division of Random House, Inc., New York.

L
OVESWEPT
is a registered trademark of Random House, Inc.

Desperate Measures
was originally published in paperback by Loveswept, an imprint of The Random House Publishing Group, a division of Random House, Inc. in 1989.

Bill Flannery—who
made his own
“emergency” exit.
Thanks for the
inspiration
.

She was the most incredible woman he’d ever seen.

At least he thought she was, Joe Carlini admitted as he desperately tried to keep his balance and look natural. Still, his frantic glance around the roller skating rink had shown someone extraordinary.

“Dammit. Of all times,” he said under his breath, while gingerly placing one skate in front of the other. Naturally, there would be a major distraction when he was trying to prevent a catastrophe. His feet slipped out in opposite directions yet again, and he clutched at the lime green cinder-block wall. Muttering curses, he managed to stay up-right through sheer willpower.

He decided he was insane to have thought he could pull this off. The last time he’d been on skates was at least twenty years ago, and he hadn’t been any good at it then. He certainly wasn’t fooling
any of the adults at this southern New Jersey skating rink. All of them were whizzing gracefully by him with the skills of experience and practice … including Mario Penza.

This was no time to be clinging to cinder block, Joe thought, as he inched his way along the wall. He had followed his adversary to the rink without a hitch, then had boldly come inside. Mario, to his reluctant admiration, had barely blinked at the opposition’s unexpected appearance. It had been a fluke of luck that Joe had discovered Mario’s rendezvous … and he’d been horrified when he realized what Mario was up to. Still, Joe had won this particular battle, and Mario’s clever attempt at espionage was in jeopardy. Up to a point. Unfortunately, it was an “adults only” morning at the rink, with free coffee and doughnuts, so a nonskater drew more attention to himself than he might want. But why Joe had thought
he
would be less conspicuous on skates was beyond him now. He had hoped, in one stroke, to trap Mario and whomever he was meeting. Instead, he had fallen into another trap quite nicely.

Mario’s voice was suddenly in his ear. “You’re not as smart as everyone thinks you are, Joe.”

Ignoring the sarcasm, Joe turned his head toward Mario, who had braked to a halt a mere foot away. Joe smiled blandly. He knew he couldn’t show the least emotion. “So you would like to think.”

Mario was not daunted. “You look so foolish.”

“Not as foolish as you are. You’ve been caught, Mario.”

The young face lost its cocky expression and turned hard. “You can’t do a damn thing without
proof and you know it. And if you do, I’ll rub your nose in it.”

“And you’ve just admitted there’s proof to be had,” Joe said.

Mario snarled at his own mistake, then skated away. Joe grimaced as he watched him go. Knowing Mario—and unfortunately he knew him all too well—Joe was certain the younger man would hardly be chastened by the exchange. Joe muttered a barnyard curse that summed up all his frustrations beautifully.

“Instead of swearing at the fates, why don’t you keep me company while I skate over to the benches?”

The voice was soft and serene and tinged with amusement. Even before he turned his head, Joe knew whom he would find.

Still, he wasn’t prepared for his own reaction when he stared into her blue-green eyes. The internal explosion was instantaneous and intense, and like nothing he’d ever felt before.

His first thought was that his first thought hadn’t done her justice. She was very beautiful. And then he realized she wasn’t. At least not in the conventional sense. Her jaw was a shade too square and her nose a shade too broad for her features to be truly delicate. But her complexion was flawless, the fair skin like rich, unblemished cream. Her hair, pulled back from her face, was neither brown nor blond. More of a champagne color, he decided. Her perfume was subtle and clearly expensive. His gaze wandered helplessly downward to discover breasts, soft and full, a small waist, and rounded hips. The gentle slenderness of her body was undeniably sensual.

And best of all, she had a thoroughly kissable mouth.

Some shred of sense surfaced, reminding him he was there to prevent the course of destruction set by Mario. But his awareness was caught by the answering fire flaring in her eyes. He blindly reached out his hand to it.…

And, incredibly, it was gone.

“Can you go with me?” she asked in the most normal of voices. “Or would you prefer to hang onto the wall?”

Her sensual response to him had been so brief, he almost wondered if he had imagined it. He couldn’t have. Still, she had suppressed it so completely.…

Joe cleared his throat and straightened. His skates instantly shot out from under him. The woman grabbed his arm and steadied him before he lost his balance. He was surprised and yet not surprised that her touch ignited a slow burn within him. It radiated through his veins, heating his blood.

Whoever she was, she did the damnedest things to him. And he very much liked the way she avoided embarrassing him. She looked familiar too. He wondered if he’d seen her before, yet knew he wouldn’t have forgotten if he had.

“I think I’ll try the benches,” he said, grinning. “I thought this would be like riding a bicycle and everything would instantly come back.”

“I believe that is the theory,” she replied, smiling at him.

Her smile faded for an instant. “I … my name is Ellen, and I find waddling like a duck helps.”

Joe blinked, not sure he heard right. “You waddle like a duck?”

“Yes. Here, I’ll show you.” Her fingers tightened around his arm. She bent her knees slightly and pushed off slowly from side to side. He helplessly followed her example. He had to, or else he’d be pulling her down with him. While the thought had its merits, he didn’t care to make a fool of himself voluntarily. He was doing just fine involuntarily.

He realized that his feet
weren’t
slipping out from under him and his balance was much better.

“I can skate!” he exclaimed.

“Maybe it would be best not to commit yourself quite so soon,” Ellen cautioned, when he wavered.

Still, he couldn’t help gazing around the skating rink with newfound pleasure. He spotted Mario and immediately reminded himself he was here to stop the younger man from conducting his “business.” He had to. The consequences were unthinkable if he didn’t.

Mario was staring back. Joe couldn’t quite make out his expression from across the wooden rink, but the other was so intent on him that he nearly bumped into a skating couple. After neatly avoiding the collision, Mario dipped his head in concession. Joe nodded back, indicating their “game” was hardly over. He hated to impose upon his lovely rescuer further, but he had no choice. It was an opportunity he couldn’t afford to waste.

With more courage than he thought he had he
steered away from the benches and toward the skating circle.

“More fool I,” he said, taking her hand. He skated just a little faster, and when he didn’t fall on his face, he said, “Actually, I’m getting a lot of self-confidence back, so if you’d just hang in here with me for a few turns around the rink, I’d really appreciate it. I feel like I’m on a roll.”

“Let’s not get crazy here.” She hesitated for a moment, then laughed slightly. “More fool I. But only once around the rink, and then we’ll see.”

He heard an underlying surprise in her laugh, as if she hadn’t laughed for a long time. He glanced at her. Now that the fire he’d glimpsed earlier was under control, he could discern an air of fragility about her, as though she were close to shattering. The thought startled him. He tightened his fingers around hers and smiled. “Good. I’ll lead.”

He sped up his “waddle.” He wouldn’t win any races, he admitted, but at least he was moving at more than a snail’s pace … and staying upright. This wasn’t so bad.

“Been skating long?” he asked his companion, as he noticed Mario weaving expertly in and out of the other skaters. Show-off, he thought darkly.

Ellen didn’t answer at first. He glanced over at her patrician profile. She must have sensed his awareness, for she said, “I skate off and on. It’s great exercise.”

“So I’ve been told. Unfortunately, somebody forgot to tell me about the pitfalls.”

She groaned at his near pun. “You’re doing very well.”

“I’m getting great help,” he said, squeezing her fingers. Her hand fitted in his perfectly, as if made for it. “I thought I’d try this rather than the gym,” he added. “It seemed … easier. I forgot that you actually had to know how to skate.”

She laughed, and again he sensed a rustiness on her part. He was also beginning to sense a barrier, very subtle yet solid. She was politely friendly and no more.

And that, he thought, as Mario skated across their path, was all he had time for right now.

“Do you come here often?” he asked, hoping she might have seen Mario here before. At the moment he was desperate for any kind of information.

“Oh … ahh,” she stammered. He was surprised to see color flushing her cheeks. “I’ve been here once or twice, maybe. Actually, hardly ever.”

Somehow her words didn’t ring true. It was obvious she skated regularly somewhere, although he knew it might not be at this rink. He decided another tack might be better.