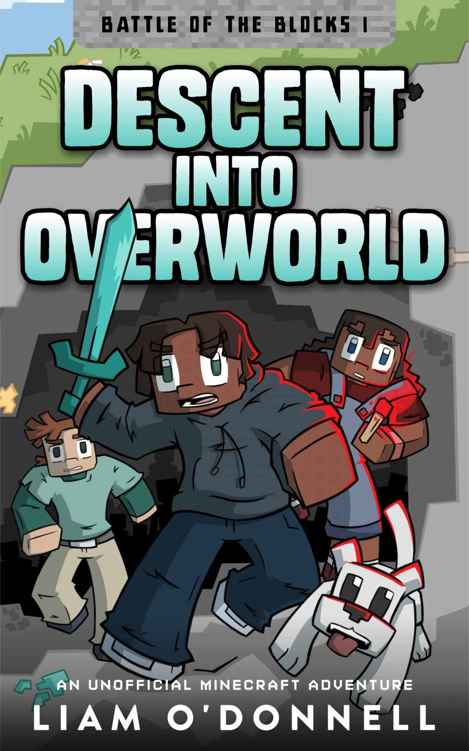 Descent into Overworld
Battle of the Blocks
Book One

For the Rools, the Grims, the Aeries

and all the Youngers and Elders

Join my Reading Change Readers Group and get a free copy of Tech Tales, monstrous stories your reluctant readers will love.

You’ll also get reading resources and project updates every month.

Descent into Overworld
Battle of the Blocks 1

Things got serious when the creeper blew up the cafeteria.

Hamid, Ant and Jaina just want to create epic builds in Minecraft. When a mysterious stranger gives them four foam swords, the three friends and their videogame-hating principal are transported into a world of blocks and thrown into an epic battle to save their favorite game.

An army of Minecraft monsters threatens to rampage across the real world, destroying neighborhoods, terrorizing families and totally giving videogames a bad name.

Together, Hamid and his friends must harness the power of their swords to fight the horde of zombies, skeletons and creepers. But first, they have to stop their principal before he makes a deal with the game’s ultimate dark force to destroy Minecraft once and for all.

Grab your pickaxe, the Battle of the Blocks has begun . . .

Things got serious when the creeper blew up the school cafeteria.

“This is bad,” Ant said from under the food prep table. Goopy pasta dripped from the edge. He caught a glob with his fingers and popped it in his mouth. “Bad but very delicious.”

“It’s bad and it’s very much your fault!” Hamid said. He elbowed Ant in the back to get more room under the table.

“I said I was sorry about that.” Ant squished over, giving his best friend prime access to the dripping macaroni.

Ant hated to admit it, but Hamid was right. This was all his fault. Ant had caused this chaos. He was the reason why his school was filled with roaming creepers. And there was no way to stop it.

A loud hissing came from the other side of the windows running along the kitchen wall. Hamid spied a tall, sausage-shaped shadow crawling through the darkness. The creature peered through the window with sad eyes. Its body flashed like a broken light bulb. Hamid knew what was coming next. He plugged his ears.

“There goes the pizza lunch special.” Ant rubbed his belly. Tomato sauce and pizza dough covered the floor. It mixed in with the spilled macaroni to create a swirling mess of food that Ant might have sampled if they weren’t hiding for their lives. He stared longingly at the goop. “All that pepperoni gone to waste.”

Sharp screeches echoed through the ceiling from outside. The school windows rattled as a squadron of flying ghasts rained fireballs down onto the schoolyard.

“Sounds like they hit the Adventure Playground,” Hamid said.

“The kindergartners are going to be ticked off,” Ant said.

The kitchen door burst open. Two thin shapes clattered through the doorway. The sinister pair moved as if they were one. Their long bows were pulled tight, arrows ready to fly. Skeletons. The clean-up crew, moving in to mop up anything that survived the creeper blast. They pointed their bows around the kitchen, looking for a target.

Hamid felt like he’d eaten a tub of rotten mayonnaise. There was nowhere to run. No escape.

“This is the end,” he said. “We’ve come all this way to be defeated by two lousy skeletons in our own school kitchen.”

The skeletons rounded the end of the table. They spun their bows directly at the two friends.

Ant and Hamid looked their attackers in the eye. They were ready to accept their fate.

The real world would never be the same.

Two weeks earlier, Ant and Hamid were thrilled to be surrounded by skeletons and creepers.

“I told you Mini-Minecon was going to be a blast,” Ant said.

“You said it was going to be total fail.” Hamid gave his friend a playful punch.

“Ouch!” Ant rubbed his shoulder in mock agony. He stood a head taller than Hamid and was thin as an enderman but moved slower than a slime-slurping uphill.

“He’s right, Ant,” Jaina said beside them. She was in sixth grade, was almost as tall as Ant, and loved Minecraft just as much as both boys did. “You said no one would come to a Minecraft convention in our home town. Remember?”

“Only a few doubts, Ant?” Mr. Rodinaldo’s deep voice made them all jump. It always did. For a guy the size of a refrigerator, Mr. R moved as quietly as a ninja. Hamid wondered if they taught Sneaking 101 at teacher’s college. “I seem to recall you saying our Mini-Minecon convention was going to be just me and a plate of uneaten sandwiches.”

Mr. R chuckled. “I’m only teasing, Ant. I had my doubts too, but this little event turned out to be a success.”

A sea of people moved through the lobby of the convention center. The place was packed with fans of the blocky building game. People in cardboard creeper costumes hurried across the orange carpet. Families wearing Steve heads posed for pictures. There was even some dude on stilts in a full-on enderman costume. For a town as small as Renville, it threw a pretty good Minecraft party.

A woman with big hair and an even bigger smile walked up to them.

“Are you ready for your interview now, Mr. Rodinaldo?”

It was Mr. R’s turn to jump in surprise.

“Excellent. We’ve got the camera set up over here.”

Mr. R followed the woman across the lobby to a quiet corner where a tall man carrying a TV camera on his shoulder greeted them.

“Is that Sheena Raine from Channel 57?” Ant’s eyes bugged out. He looked like a toad that just swallowed a hot pepper. “Is Mr. R going to be on the news tonight?”

“That would be cool,” Hamid said.

Mr. Rodinaldo had played Minecraft since it was in beta. He was the one who had started the Minecraft club at their school. Not that it was much of a club, thanks to their principal’s dislike for videogames. Principal Whiner refused to allow any videogames on school computers — even those lame educational games that tried to trick you into learning stuff. Whiner’s motto was ‘If it’s fun, it’s not learning!’ He even had it painted on the walls of their computer lab in the library.

Naturally, Whiner refused to allow Mr. R to start a Minecraft club at the school. But Mr. Rodinaldo’s favorite motto was ‘If at first you don’t succeed, keep nagging.’ Eventually Whiner caved. Sort of. He allowed the club but definitely didn’t want it to succeed. To ensure its failure, Whiner limited the club to only three members.

Chaos ensued. Every kid in the school hounded Mr. R. They pestered him before school, after school, at recess and even while he ate lunch in the staff room. They pleaded with him to be one of the lucky three. You would think Principal Whiner would take this as a sign that the club would be a hit with the kids. Instead, Whiner blamed Mr. Rodinaldo for distracting students from their valuable learning.

Most teachers would have just cancelled the club after all this hassle, but not Mr. R. He put all names in a very large hat. Jaina, Hamid and Ant were the lucky three chosen. Everyone at the school hoped Principal Whiner would let more kids into the club next year. Hamid figured they had a better chance of seeing the old fart wear an ‘I pork chop Minecraft’ T-shirt.

Mr. Rodinaldo had helped organize today’s Mini-Minecon in their home town, and what a great day of geeking out it had been.

Jaina had gone to all the redstone workshops and learned a bunch of new tricks and builds for her pistons and redstone contraptions. Ant had spent time in the master building sessions, learning about new ways to use Minecraft’s blocks to create colossal builds. Hamid got his nerd on with the back end coder types. They sat around talking mod packs, plug-ins and other admin level stuff to keep his server humming along.

“We should say goodbye to Mr. R before we go,” Jaina said. “If he ever finishes talking to Sheena Raine.”

Hamid grinned. “When Mr. R gets talking about Minecraft, it’s hard to get him to stop.”

“He’s not the only one.” Ant fixed Hamid with a knowing stare.

“It’s my Minecraft knowledge that has saved your butt many times, noob!”

A guy in a villager’s costume pushed his way out from the crowd. He ignored the complaints of the other fans and stumbled toward them. Without a word, he collapsed into Hamid’s arms.

Jaina rushed to the man’s side, helping him stand.

The villager didn’t respond. He struggled to breathe under his mask. Was it even a mask? It was the best Minecraft villager head Hamid had ever seen. He couldn’t tell where the costume ended and the person began. But the guy did get one thing wrong: this villager had red hair. Even the biggest noob knew all villagers are bald.

The villager grabbed Hamid’s shirt and looked him straight in the eyes.

“Get the mask off him so he can breathe better,” Jaina said.

The villager shook his head. He let go of Hamid’s shirt and sat down on the carpet. He slipped his backpack from his shoulders and began rummaging through the bag.

A thin piece of wood tipped with feathers stuck out from the villager’s side.

Ant leaned close to Jaina. “Look at that arrow! Is that part of the costume?”

the Key-Lock Man (1965) by L'amour, Louis
Wellington’s Engineers: Military Engineering on the Peninsular War 1808-1814 by Mark S. Thomson
One Corpse Too Many by Ellis Peters
Historical Trio 2012-01 by Carole Mortimer
Montega's Mistress by Malek, Doreen Owens
Her Last Wish by Ema Volf
Undoing of a Lady by Nicola Cornick
Cat Striking Back by Shirley Rousseau Murphy
Happy Family by Tracy Barone
Honour of the Line by Brian Darley