Descendant (Secrets of the Makai) 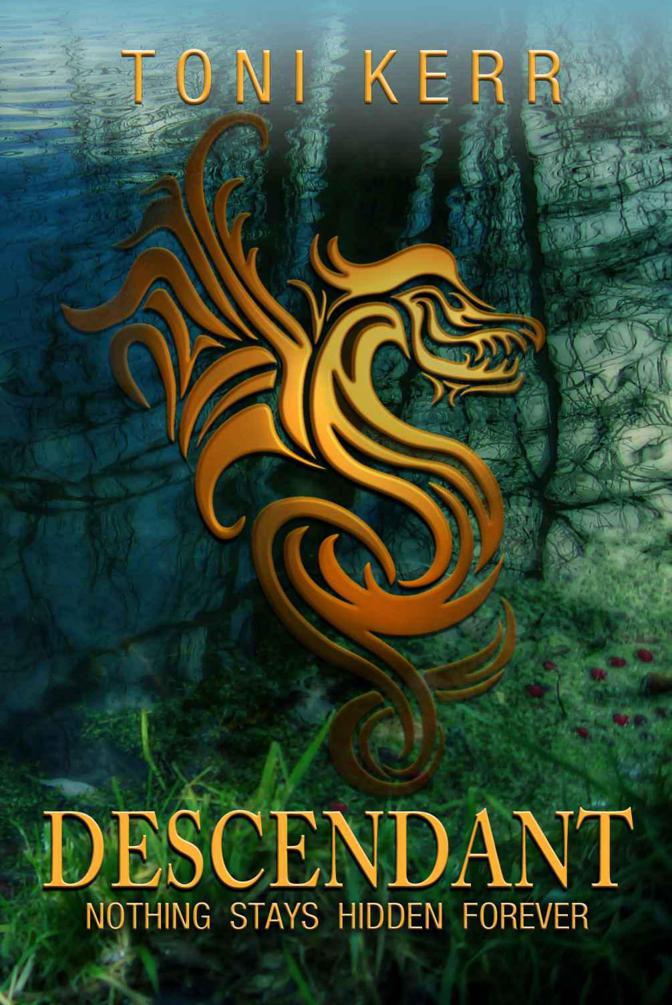 This is a work of fiction. The characters, incidents, and dialogues are products of the author's imagination and are not to be construed as real. Any resemblance to actual events or persons, living or dead,

All rights reserved. Printed in the United States of America.

No part of this book may be used or reproduced in any manner whatsoever without written permission except in the case of brief quotations embodied in critical articles or reviews.

Summary: In a world of trickery and manipulation, 15-year-old Tristan has tried to cope with hearing the thoughts of others. But that was child's play when an old woman appears with a murderer hot on her trail. Now, Tristan must find the possessed emerald he was destined to protect and learn to control powers he never knew he had while secret societies track his every move.

Author can be contacted at: [email protected]

With love to my family and friends

near and far, new and old.

May every writer have such an

TRISTAN KEPT HIS HEAD DOWN, sifting through the drowning mix of thoughts bombarding him from the line of school buses. Students flooded the sidewalk before him. He searched the crowd and spotted the freshman girl he'd been waiting for, pulled out a pack of gum from his pocket, and fell into step behind her.

The girl stopped long enough to stuff her chewed gum into the roaring mouth of the school's mascot—a large cement lion perched at the base of the front steps.

Don't clean it off.
Her mental voice continued on, begging the maintenance man to give them all a chance to cover the lion completely. It was her idea, a way for the students to protest the latest 'no gum in school' rule.

The girl spun around just as Tristan moved to slip the pack of gum into her backpack, forcing him to hand it to her instead. "Don't give up," he said.

"What are you talking about?" She eyed the pack of gum, then the statue.
You're the one who's been sneaking us gum?

Tristan hesitated. It wouldn't hurt his plans if she knew, but he didn't have time to discuss it. Especially if she ended up asking how he figured out she was in charge, or who'd told him. He took a step back to let students flow between them and crossed 'gum' off his mental list.

The school towered above him like a brick slaughterhouse. He took in a breath and let the students herd him inside.

Last day,
he reminded himself, pulling one of two sealed envelopes from his back pocket.

He veered away from the crowd to move a little faster and skimmed the locker numbers. At 813, he slipped the envelope through one of the slots and kept moving.

Tristan froze in place, only slightly relieved that the woman's voice didn't belong to the girl he'd delivered the message to. He turned to face the school counselor, the one he'd ditched to get last-minute things done.

"How's tomorrow?" Tristan asked, then blew his hair away from his eyes. "I promise I won't forget." As if he'd forgotten this time. Or the time before that.

The woman shook her head and sighed. "Fine. Tomorrow. But you're only hurting yourself."

Tristan couldn't hear her truer thoughts on the matter, but not everyone's thoughts could be heard. Maybe it was a skill, or maybe some had more to hide than others. He shrugged. "I'm still trying to decide what colleges I want to look at, then I'll make a plan."

"Sure," Tristan mumbled, nearly knocking someone over in his rush to get away.

The girl of locker 813 blocked his path, waving the hand-written note in his face. "Is this from you?"

"That's not my writing." He'd disguised it on purpose, but her thoughts replayed her friend's report—he'd been spotted slipping the envelope into her locker. "I was just told to deliver it."

"Bull," the girl said. "You're just trying to get me to break up with Milo."

"Why would I do that?" Tristan rolled his eyes and tried to leave, only to be stopped by Milo and his wanna-be thugs.

That's the problem with school—you're nothing if you don't have a handful of friends to watch your back.

The five-minute warning bell echoed in the halls.

"Are you harassing my girlfriend?" asked Milo.

"He gave me this!" she said, handing Milo the note.

Tristan searched for a way out as Milo took the page. He still couldn't think of the girl's name. Milo slammed him against the wall of lockers. "Who told you about this?" he whispered, inches from Tristan's ear.

"No one." He'd overheard the negotiations at work—Milo agreeing to bring three girls to a college hazing ritual if he and his friends could tag along. He planned to invite his girlfriend and two of her friends. "They have a right to know."

"Why, so you can be some hero? You plan on dating her after me?"

"No—" A quick hand diverted Milo's punch. Knuckles slammed against metal lockers instead of Tristan's face. Tristan stared at the two students willing to step in: Landon and Victor.

"You'll be late if you don't get going," said Landon.

Tristan nodded, though attending class wasn't on his list. "Thanks."

They were an odd pair—Landon with his long hair always in a tight ponytail and Victor with his sun-bleached curls and shell necklaces. He didn't know them all that well, but they were in several of his classes and usually together.

Tristan snuck into his history class unnoticed and sat in the back row, mentally reviewing the things he still needed to get done before dark and the risk he'd taken to warn Milo's girlfriend. He used to act on mentally acquired information quite often, but the older he got, the more trouble it made. And so many situations were none of his business. Who was he to decide what should happen to people?

Still, for some things, he couldn't sit idly by and do nothing. And he could always count on his mother to jump ship before anyone suspected real mind-reading, taking him to a new town, a new school.

No more moving. No more starting over. No more paranoid feelings about being watched all the time.

He dug out his sketchbook and sharpened a few details on the drawings that meant the most, purely for peace of mind. Doodling often had that effect.

Mr. Felton stopped beside Tristan's desk and cleared his throat, dropping a stapled Civil War report over the sketches. "I expected better from you."

Tristan glanced at the B circled in red. What could he say? Homework wasn't on the list, but he wanted to get something turned in. "Sorry."

"It's not due until tomorrow, so invest a little something and fix it." Mr. Felton headed for the front of the classroom.

Tristan stared at his homework and sank into his chair. There would be no fixing. Mr. Felton would probably regret his words and feel responsible, when in fact he had been a very positive influence. It just wasn't enough.

At the end of the tedious school day, Tristan took four painkillers for a migraine, emptied his locker, and left school for work.

Within twenty minutes, Tristan rounded a corner and spotted Allen, his boss, in the middle of the street, wearing an apron covered with splotches of ground beef. He was arguing with some guy with a city steering committee badge about how to run the market.

Definitely none of my business.
Tristan quickened his pace with his head down in attempt to tune out the mental volley of insults and curses, and was halfway to the back of the market before the little cowbells on the door stopped ringing.

Considering the mood his boss was in, nine o'clock couldn't come fast enough. Too many customers were loitering, he wasn't selling enough meat to make the deli pay for itself, and too much dairy was coming close to the drop-dead date. Tristan worked harder than usual to make the night easier; it was the least he could do in return for the friendship.

"You're lucky you live on the south side, so you don't have to deal with all this committee crap."

"If you say so." Tristan put all his weight into wringing out a mop head, then sopped up the final section of checkerboard flooring—the last of his duties.

"Before long, you'll be driving home," his boss said as Tristan punched his timecard. "Got your learner's permit yet?"

Tristan shook his head and forced a smile. He'd driven a few times—when his mother was too drunk.

"I need to get some bread and milk, if that's okay." He just needed Allen to either leave his office, or stay at his desk. Either would work.

Tristan made his way around the store and bagged the items, then rattled the till when it wouldn't budge. Allen stepped out to check on him.

"I locked it for the night."

"Here." Tristan handed his boss a ten-dollar bill. "You can keep the change, or add it to my next check. I gotta get going." Tristan hurried to the back with his plastic bag of groceries, sweat dripping down his spine. A quick glance assured him that Allen was busy punching in the code to open the till.

He dashed into Allen's office and left a corner of the second envelope exposed from beneath the keyboard, containing three uncashed paychecks.

He'd planned to run away with the money, but running to the next town had never fixed anything. He grabbed his sweatshirt from the hook and hurried toward the door.

Allen blocked his exit. "Everything okay?"

"Sure! I just.... My mom's waiting for me, I think. I told her I wouldn't be too late." He was a terrible liar, and Allen was a great boss. The silence filled him with unreasonable guilt. "I was just getting my sweatshirt."

Allen nodded slowly. His suspicious eyes scanned the room until they landed on the plastic bag.