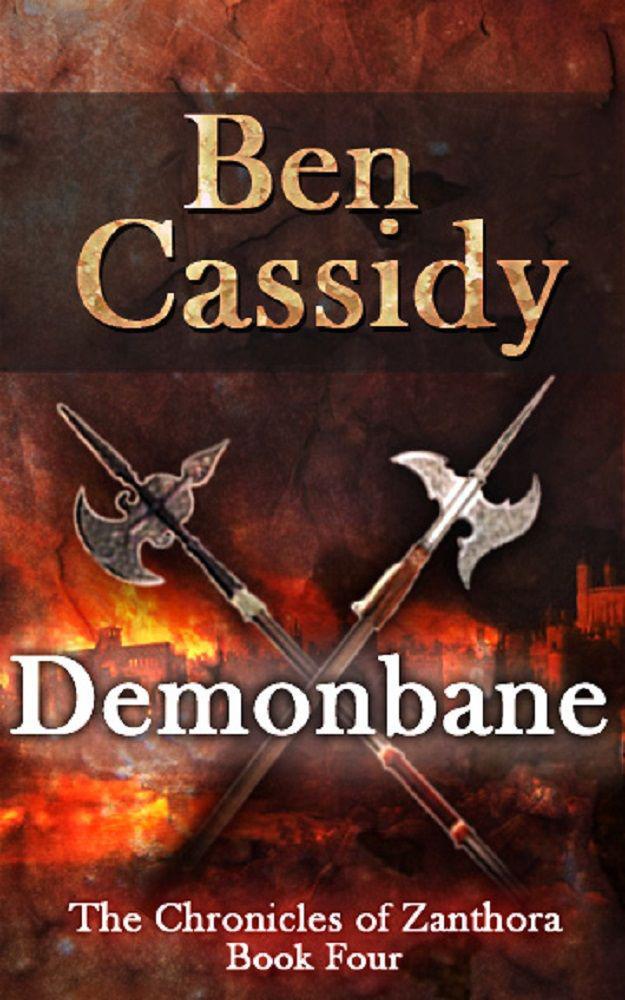 The Chronicles of Zanthora: Book Four

Copyright © 2012 by Ben Cassidy
All rights reserved. This book or any portion thereof
may not be reproduced or used in any manner whatsoever
without the express written permission of the publisher
except for the use of brief quotations in a book review.

Books in the Chronicles of Zanthora:

Tales of the Two Rings:

Daughter of Llathe: A Tale of the Two Rings

Tales of the Two Rings: Volume 1

Tales of the Two Rings: Volume 2

To join an email update listserv for future releases, contact:

Dedicated to my sister Mica,

who believed in me from the first

“I won’t let you seduce Baron Dutraad,” Maklavir said under his breath. “You’re my
wife
, for Eru’s sake.”

“Oh, come on, Maklavir.” Kara brushed back her fiery red hair. Her eyes remained on the gaggle of nobles and aristocrats that crowded the great hall. “It’s the easiest way to get into his bedroom. You saw how he was flirting with me.”

Maklavir flipped back his red cape, and rubbed anxiously at his clean-shaven face. He glanced out the window at the swirling snow. “It just seems so…
improper
.”

“Why,
hello
Lady Anaren,” Maklavir interrupted, giving a majestic bow. He kissed the hand of the plump woman who had just come up to them. “Such a delight to see you. I believe your husband is over by the tapestry. I hear dinner will be served soon. Such a delightful gathering, is it not?”

The noblewoman giggled pleasantly, then drifted off into the sea of guests.

“Kendril said the Soulbinder would be close to Dutraad,” Kara hissed as soon as the woman was out of earshot. “The bedroom is the best bet. Seducing him is the easiest way to get inside.”

“It might not be in his room,” Maklavir returned quietly. The fake smile was still plastered on his face. “He might have it on him.”

“Well, then,” said Kara with a wry grin. “My plan kills two birds with one stone, doesn’t it?”

Maklavir shot her a cold glance. “I can’t believe you’re talking about this. We’ve been married less than a day.”

“Very funny.” Kara slipped her arm into Maklavir’s. Her eyes swept the crowded hall. “So who was that woman?”

“Not her. The dark-haired one with the amazing cleavage we met a few minutes ago?”

“Sure  you didn’t.” Kara pulled them both out into the room. The low rumble of conversation all around enveloped them. “Did you notice the necklace she was wearing around her neck? The jewel was beautiful. It was honey-colored, like—”

“Amber,” finished the diplomat with a frown. “Now why does that remind me of something?” He glanced nervously over his shoulder, as if expecting the dark-haired woman to reappear. “We didn’t even get her name, did we? There was something about her that struck me cold.”

“You mean the fact that she was coming on to you right in front of your
wife
?” Kara replied hotly.

Maklavir chuckled. “So it’s all right for
you
to be unfaithful, but not me?”

“Details, details.” Kara glanced up at the brilliant glow-globes that lit the massive hall. “Besides, for this to work you’ll have to distract Dutraad’s wife.”

Kara gave him a sidelong glance. “For you or for her?”

“Both.” He lifted his head, his eyes narrowing. “At any rate, I don’t think it will be Lady Dutraad who will need distracting.”

There, across the expanse of the hall, Dutraad was laughing and talking loudly with a group of noblemen.

The dark-haired woman stood nearby, her arm linked in Dutraad’s. She looked up at the Baron with admiration and fawning awe.

Kara squeezed Maklavir’s arm. “That rat!” she breathed. “How
could
he…poor Mina!”

Maklavir stopped and cocked an eyebrow at his lovely companion. “Let me get this straight. You’re angry at Dutraad for cheating on his wife, the same man, I might add, who
you
were planning to seduce, and whose wife you wanted me to show romantic interest in as a diversion?”

Maklavir gave a half-shrug. “Chances are that Mina is aware of her husband’s mistress. She might even have encouraged the match. Remember, Kara, this is the upper class. Love and marriage are mutually exclusive concepts.”

The redhead pulled Maklavir closer to her. “Well,
we’re
going to be the exception. You’re not allowed to look at another woman here.”

“I see,” said Maklavir with a sour grin. “So now you
don’t
want me to flirt with any other women in order to preserve our pretend marriage? I am at your command, madam.”

Kara dug an elbow sharply into her friend’s side. “Remember, as soon as we find that Soulbinder we can get out of here. That’s the priority”

Maklavir looked around the hall, a sad expression on his face. “Yes, I know. That’s why we’re here, isn’t it?”

A chiming sound came echoing from the front of the hall.

Maklavir and Kara turned their heads at the noise.

The dull roar of conversation in the hall slowly ground to a halt.

Dutraad put down the wineglass and silver fork he had been holding, then beamed at his guests. “Ladies and gentlemen,” he said with a flourish, “dinner is served.”

Joseph flattened up against the wall in the darkened hallway. From behind him came the noise of bustling servants down the stairs in the kitchen. “It has to be a coincidence. Or a different person. Maybe you—”

“I know who I saw,” Kendril snapped. “It
was
Bronwyn. The same woman who conspired with Lord Bathsby back in Llewyllan, the same one who killed the King and framed me for it—” He took a second to compose himself. “I found books on witchcraft in her room. I saw her casting a spell on Jade back in Balneth. She’s in league with the darker powers, the Seteru.”

Joseph looked over at the Ghostwalker. “So you’re saying there’s a woman here at Dutraad’s estate who is consorting with the same demons that the Soulbinder was designed to summon in the first place?” He glanced down the hall. “
Ashes
.”

“Now you’re seeing the problem.” Kendril reached under his vest and clasped his hand around the hilt of the dagger that he had hidden there. “This changes everything. Back in Balneth, Bronwyn was the one pulling the strings, not Bathsby. I should have seen it then. And
now
—”

“Now,” Joseph finished for his friend, “she’s pulling them again.” He rubbed a hand across his face. “You think she’s in league with Dutraad?”

Kendril pushed away from the wall. He looked cautiously down the empty hallway. “It makes sense, doesn’t it? If the Soulbinder’s involved, then so is Bronwyn. There’s no way that her being here is just happenstance.”

Joseph nodded. “Alright, so Bronwyn is here. That doesn’t really change anything, does it? We still need to retrieve the Soulbinder. Chances are it’s still somewhere here in the house, perhaps in Dutraad’s room—”

Kendril shook his head. “No,
think
. Bronwyn might have it herself, or at least have hidden it somewhere. Ashes, she might even have it on her.”

Joseph looked his friend in the eyes. “This simple little mission of ours seems to be getting rapidly out of control, isn’t it? Maybe we should signal the other Ghostwalkers and storm this place after all.”

Kendril bit his lip. “We c
an’t
. Not yet. We still don’t know who has the Soulbinder, or where it is. If Bronwyn or Dutraad escape with it—” He let the sentence hang unfinished. “I already let the Soulbinder out of my hands once. I won’t let it happen again.”

“You only gave it up to save Maklavir’s life,” Joseph added.

Joseph smirked. “So what now?”

The dining hall was huge, lit by hundreds of candles instead of the usual glow-globes that furnished light to the rest of the manor. Each candle was sheathed in a crystal sleeve that caused the light to sparkle and refract across the length of the hall like thousands of glittering snowflakes.

The long table itself was piled high with rich and savory foods of every description. There were platters of meat, pitchers of gravy, bowls of vegetables and exotic fruit imported all the way from the Spice Lands, as well as baskets filled with every conceivable variety of
flenshi
bun imaginable. Lines of house servants stood expectantly behind the chairs on either side of the long banquet table, ready to serve at a moment’s notice.

“About time,” Kara whispered, staring at the long table of food. “I’m starving.”

“Not too much,” Maklavir cautioned as they entered the room with the other guests. “Remember, a lady does not gorge herself.”

“Who made up that stupid rule?”

Maklavir glanced behind him, noticing the armed guards that lingered by the doorway leading back into the great hall. “We should find our seats. There should be place cards. And remember. Don’t take any food, regardless of how close it is to your place.”

“I know, I know,” Kara said with a roll of her eyes. “The servants will do all that for us. Eru forbid that any of these bluebloods should have to lift a finger for themselves.”

“Yes, well for the remainder of the evening
you’re
a blueblood, too,” Maklavir reminded the thief. He looked up and down the length of the room.

Guests were filing in, laughing and gossiping as they found their seats around the huge table.

“We’ll have to suffer through dinner, I’m afraid,” Maklavir said under his breath. “You can change for the ball afterwards, then slip out during all the dancing. Your absence will be less easily noticed that way.”

“I hope you’re right,” Kara said. Her eyes skipped over to a plate of steaming mutton. “I guess we’ll just have to suffer in the meantime.”

The two of them stopped by a place card on the table.

“Here’s your name,” Kara commented. “But where’s mine?”

“Lady Maklavir,” a soothing voice interrupted. “Surely you know that a husband and wife never sit next to each other at dinner party?”

The dark-haired woman approached them, one white hand slithering over the back of a nearby chair. She stopped by Maklavir’s spot and picked up the adjacent place card. “Well, Mr. Maklavir, it appears that I will have the distinct pleasure of your company tonight.”

Maklavir cleared his throat. “Ah, yes, Ms.—” he glanced down at her place card, trying to avoid staring at the girl’s swelling bosom, “Brionne.” He managed a smile. “It will be a pleasure, I am certain.”

Kate Wingo - Highland Mist 01 by Her Scottish Captor
Eden's Pass by Kimberly Nee
The Communion of the Holy Spirit by Watchman Nee
When Faults Collide (Faultlines #1) by Claire Granger
One Night with a Rake (Regency Rakes) by Mia Marlowe, Connie Mason
Entralled by Annette Gisby
Feehan, Christine - The Scarletti Curse by The Scarletti Curse (v1.5)
A Trip to the Principal's Office (Jana's Journey, Part One) by Natasha Stevens
Manwhore +1 by Katy Evans
Underfoot In Show Business by Helene Hanff