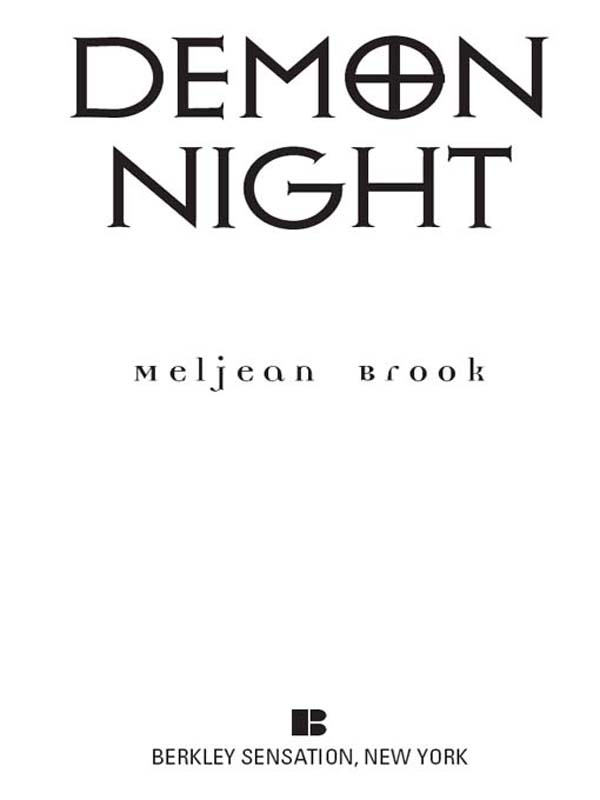 “An action-packed series full of
creatures of dark and light.”

“A read that goes down hot and sweetâutterly uniqueâand one hell of a ride.”

“Sensual and intriguing,
Demon Moon
is a simply wonderful book. I was enthralled from the first page!”

âNalini Singh, national bestselling author of
Slave to Sensation
and
Visions of Heat

“Action-packed, with a fascinating, one-of-a-kind vampire hero and a heroine with some very unique qualities.”

“Brings a unique freshness to the romantic fantasy realmâ¦action-packed from the onset.”

“I loved every moment of it.”

â
All About Romance

“Fantastically drawn charactersâ¦and their passion for each other is palpable in each scene they share. It stews beneath the surface and when it finally reaches boiling pointâ¦Oh, wow!”

“A surefire winner. This book will captivate you and leave you yearning for more. Don't miss
Demon Angel.
”

“An emotional roller coaster for both the characters and the reader. Brook has penned a story I am sure readers won't soon forget.”

“In-depth and intriguing. I loved the obvious thought and ideas put into writing this tale. The characters are deep, as is the world that is set up.”

“I look forward to many more tales from Ms. Brook.”

This is a work of fiction. Names, characters, places, and incidents either are the product of the author's imagination or are used fictitiously, and any resemblance to actual persons, living or dead, business establishments, events, or locales is entirely coincidental. The publisher does not have any control over and does not assume any responsibility for author or third-party websites or their content.

A Berkley Sensation Book / published by arrangement with the author

All rights reserved.
No part of this book may be reproduced, scanned, or distributed in any printed or electronic form without permission. Please do not participate in or encourage piracy of copyrighted materials in violation of the author's rights. Purchase only authorized editions.
For information, address: The Berkley Publishing Group,
a division of Penguin Group (USA) Inc.,
375 Hudson Street, New York, New York 10014.

To Bobby, because you're it for me.

And to the Renob Dogs (of the American Society of Barbecued Cats for Breakfast): my sisters, Jen, Kate, and Echo. Sorry, Megan, you were born too late to joinâbut, because you live with me and I'm afraid of waking up with shaved, green, and/or super-glued hair, I guess this is also for you.

Special thanks to my editor, Cindy Hwang, because the first time might have been a fluke, but you went for a second, and that's more than I ever expected. To my agent, Roberta Brown, for making the second time as smooth as possible. And to Leis Pederson, for making sure that everything gets to me (and that I get everything back to you).

“The McCabe boys are coming in, Sheriff. From the west.”

A dusty deputy was an unlikely harbinger of doom. Lightning forking across the sky, tremors that fractured earth and oceanâ
those
were portents of ruin. Two safecrackers were hardly cause for concern, no matter how many lawmen had died in pursuit of them or how many jail cells they'd escaped, and so it was several hours before Sheriff Samuel Danvers recognized the announcement for what it was.

Danvers eased up from behind his rosewood desk, tipping his hat back and surveying the young deputy. He'd seen rolls of barbed wire less tightly wound.

“Randolph found their campfire up on Webb Ridge, Deputy Erwin, and the latest report over the telegraph was a robbery in Tucson. How is it that they are coming in from the
west
?” A wasteland of scrub and desert stretched for fifty miles in that direction. Nothing to tempt men, whether sinners or saints or all of those in between.

“They're circling around, Sheriff. Like buzzards.” On each word, the deputy's Adam's apple bobbed with the force of his excitement.

Vultures. Danvers liked that description; the McCabe boys likely wouldn't. If they stepped foot in his town with the intention of bringing trouble, the only carrion to scavenge would be their own.

Danvers's smile was slow and long, and Erwin visibly brightened beneath it, straightening his shoulders. “Well now, Deputy. We'd best show our visitors the depth of Eden's hospitality.”

Erwin nodded, muttering, “Circling around, sneaky as coyotes. Throwing us off the scent.”

As the deputy undoubtedly hoped, Danvers was pleased by that comparison as well. “It won't be difficult to sniff them out.”

Danvers adjusted the fit of his vest and collected his pistols from a wooden peg, buckling them around his hips. The holsters were a negligible weight, and the threat of their appearance commanded more respect than the gleaming weapons withinâso much respect that Danvers hadn't yet fired them.

But then, most outlaws were cowards at heart, and his deputies were eager to please him.

After donning his neatly pressed jacket, he continued, “If not directly to the bank, where do you imagine a pair of iron workers dry from the trail would go first, Erwin?”

Danvers paused on the threshold. “Deputy.”

A blush ruddied the young man's tanned skin, and his lanky form wilted under Danvers's disapproving stare. “The saloon, sir. They'd have an almighty powerful thirst.”

“Yes.” Men were all too often driven by their weaknessesâthirst, hunger, lustâand surely men such as the McCabes were more susceptible than most. “Round up Singleton and Randolph, Erwin. I'll expect you in the saloon by nightfall.”

Cowards and coyotes waited to slink in under the cover of darkness; the McCabes wouldn't be any different.

Danvers stepped out onto the stoop. The main street curved snake-like through Eden, east to west, and the sheriff's office was at the head of it. The sun hung low over the flat roofs and peaked faÃ§ades lining the street, washing the graying buildings with pale gold, casting deep shadows in between. The jagged ridge of mountains on the western horizon appeared lavenderâand was quickly deepening to purple.

Erwin darted past him, and dust flew from his gelding's hooves as he sent it galloping down the street. Gathered in small groups in front of the general store, several of Eden's citizens turned to watch his winding progress, their concern etched in tight lines near their mouths.

They needn't have worried. Danvers had single-handedly delivered Eden from corruption; he wouldn't allow the little piece of Heaven he'd created for himself to be desecrated by the likes of the McCabes.

He walked loudly down the board sidewalk, alerting the watchers to his approach. He answered their nervous greetings with an easy smile designed to assuage their fears.

These were good people, worth saving: the women in their clean, bright calicos and fresh skin and modest glances; the men with their work-roughened hands and solemn mustaches that always gave the appearance of a frown. Even the whores lounging in Madam LaFleur's parlor across the street had the decency to cover their wares with proper clothingâand Danvers had made clear what would happen to men who treated them poorly. No one dared lift a hand or belt, and not one whore had sported a bruise in years.

And for years, he'd had to decline their offers of payment. Their gratitude was enough, and, eventually, the wariness that lingered in their eyes would fade.

Pride. He shouldn't feel it, but he did. It was a fine place, Eden. And, though it wasn't as lush as its namesake, the heat suited him.

The interior of Hammond's Saloon was dim, but Danvers had no trouble making out the faces of the men seated around the tables and at the bar. Apparently, they'd already heard of the McCabe boys' approach; their expressions told Danvers they were eager for a kill, eager to collect the bounty on the outlaws' heads.

He'd have to disabuse them of that notion. Mobs, pandemonium, chaosâthey were anathema to him. Men couldn't live without order; Danvers provided them with it. And he'd continue to provide it, even if it had to be in spite of them.

His gaze swept over the waiting men, and he delivered his pronouncement in a low voice. “We're just locking them up to await the circuit court's judgment.”

The men were disappointed, but the hunger in their demeanor transformed into a willingness to wait. Their conversations resembled the gossip of women.

“â¦I hear tell they killed seven men up in Denverâ¦”

“â¦can bust through a safe in ten seconds. Ain't no jail that can hold 'emâ¦”

Rumors, suppositions. Danvers sat at the bar and waited for his deputies to return. They wouldn't be persuaded by hearsay; he'd taught them that observation provided facts, and to study well what they saw.

From outside the saloon, he heard the heavy tread of booted feet. Danvers was not given to superstition, but the sound suddenly spoke like an omen, the fist of God falling like a hammer against his skull.

He looked toward the batwing doors. Silhouetted against the orange sky was the tall figure of a man, his shoulders as broad as a blacksmith's.

And Sheriff Samuel Danvers was absolutely certain that his little piece of Heaven was soon headed straight for Hell.

First Semester by Cecil Cross
Kissing Cousins: A Memory by Hortense Calisher
The Secrets of Life and Death by Rebecca Alexander
Cross Dressing by Bill Fitzhugh
The Demon Creed (A Demon Outlaws Novel) (Entangled Edge) by Paula Altenburg
A Blood Red Horse by K. M. Grant
Blame It on Texas by Christie Craig
Remember the Morning by Thomas Fleming
Ethan: Lord of Scandals by Grace Burrowes
Luke by Jill Shalvis