Read Demon in Disguise (Masters of the Incubus - Part One) Online

Demon in Disguise (Masters of the Incubus - Part One) 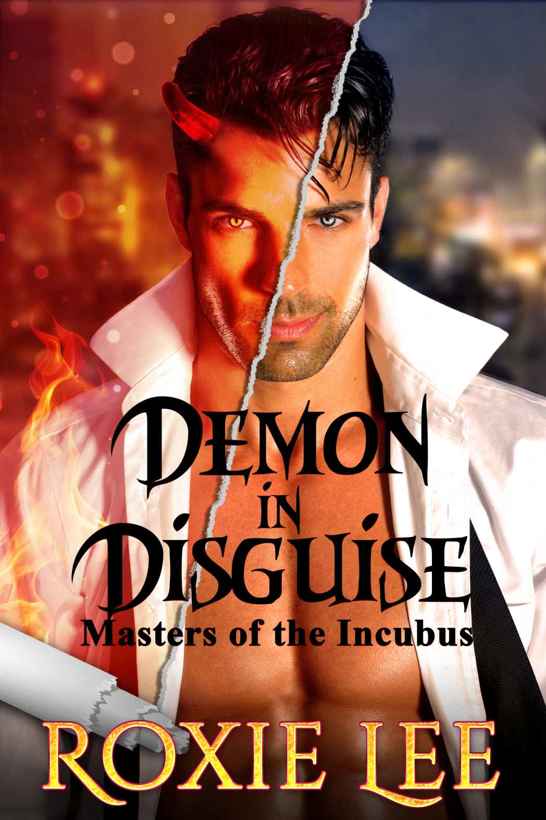 Masters of the Incubus – Part One

A Demon by nature and a soul catcher by trade, Kurt Samuelsson is enchanted by the beautiful dark-haired stranger who visits the club. He instinctively knows she’s everything he needs in a woman, and is therefore his promised one—the soul mate who will be his for eternity.

As Lacey discovers all manner of strange phenomenon pointing to demons and devil worship at the infamous venue, she becomes frightened, but also sexually drawn to the good-looking guy who always seems to be staring whenever she glances in his direction.

Lacey hadn’t reckoned on falling for the tall, enigmatic stranger with the mesmerizing eyes, and as a result her priorities become unclear.

Should she sample the demonic sexual fruits on offer from Kurt, or should she see sense and simply run from Incubus with her story, never to return again?

Reader Advisory:
Contains scenes of domination and submission, a strong heroine, and a demon in disguise.

Masters of the Incubus – Part One

No part of this literary work may be reproduced in any form or by any means, including electronic or photographic reproduction, in whole or in part, without the written permission of the publisher.

This is a work of fiction. All characters and events in this book are fictitious. Any resemblance to actual persons living or dead is purely coincidental.

To my wonderful husband, Clive, you are my inspiration, because without you, I cease to exist.

Lacey Michaels couldn’t help but smile at her best friend’s genuine concern. “You look worried, Rebecca, but there’s really no need, I can take care of myself.”

“I hear you, Lacey, but I can’t help worrying. As a natural submissive it’s part of my nature.”

“I know, but you seem to forget that I’m a twenty-six-year-old woman—one who holds a black belt in karate. I don’t need you to hold my hand, because I can look after myself just fine.”

Rebecca didn’t seem convinced. “Okay, but I wish I’d never agreed to let you come with me to Club Incubus.”

“Everything will be fine, you’ll see.”

Her friend’s name filtered through the loudspeaker system to where they both stood, waiting backstage.

“Look, I’ve got to go, Lacey. Promise me you won’t get yourself into any trouble.”

“I won’t get into trouble, I promise. Now get out there and strut your stuff, girl.” Lacey watched her childhood friend of fifteen years walk, or should that be glide through the gap in the thick velvet curtain, and onto the stage out front. A natural blonde, Rebecca held her head high and turned to the audience as she handed the auctioneer her card. Almost immediately he began reeling off the vital information it contained.

“Well, my friends, you’re certainly in for a treat at Club Incubus tonight, because at twenty-seven years of age, and standing some five feet nine inches tall, this beautiful lady enjoys playing the submissive. As you can see, Rebecca here has gorgeous, long blonde hair, and just begs to be disciplined with the whip or a cane. So gentlemen, which of you Doms will bid high enough to win this highly desirable sub? Remember, all the proceeds of tonight’s auction will go to charity, and your generosity is greatly appreciated…”

Waiting backstage, and knowing she was next in line, Lacey swallowed nervously before glancing at the card she held protectively in her hand. Would anyone bid for her? After all, she’d compiled an almost endless list of things she wouldn’t do. Anyway, whoever made the winning bid would be a complete stranger, so there had to be rules, right?

The auctioneer’s booming voice cut through her introspection. “I’m bid three thousand dollars from the tall, dark-haired gentleman, sitting in the corner.” Lacey peered through the slit in the curtain and saw the silver-haired auctioneer shake his head in disbelief. “Oh, come on, come on, good people, this beautiful creature standing before you is worth far more than a measly three thousand bucks. So I ask you again to look deep into your hearts, while you open your wallets wide. Are there any more bids, gentlemen?”

Located on the affluent West Coast, and with a members’ list that was highly guarded, Club Incubus was more like a secret society than a fet club. Catering strictly for the needs of wealthy clients, the club rarely opened its doors to new members. So when Rebecca had told her she’d been invited to attend a charity auction event at the mysterious venue, Lacey had seen an opportunity. As a journalist, getting the inside story on this secretive organization would be a tremendous boost to her career. The powers that be at the
San Francisco Spirit,
the newspaper she worked for, might even take her more seriously as a reporter, and desist from sending her to every dreary jamboree and gala event. Christ Almighty, she would certainly enjoy a break from those tedious women’s coffee mornings, where
ladies that lunch
gossip about inconsequential things of no real interest.

At first, her best friend had been adamant. “No. No. No. You’re not a natural submissive, and you’re not into the lifestyle, Lacey. You’ll be out of your depth. You simply have no idea what you’ll be letting yourself in for if I agree to let you come.”

Believing herself to be a confident woman, Lacey had instinctively disputed her best friend’s reasons for not wanting to take her along. “Listen, Becky, I’m only going to look and learn, and I certainly won’t be participating in any sexual activity with men I don’t know. Sleeping around is just not my thing. Anyway, you’ve already told me the auction rules state that the whole charade is merely a showcase to raise money for charity. A way of introducing like-minded individuals to one another. When all is said and done, it’s no more dangerous than a blind date for God’s sake.”

Rebecca had vehemently shaken her head. “You have absolutely no idea how persuasive some of these Doms can be.”

After much arguing, Lacey had eventually persuaded Rebecca to take her along. After all, what was the worst that could happen? If there was anything going on that she didn’t like at Club Incubus, she only had to say no, right?

Club Incubus had been shrouded in secrecy ever since the enigmatic philanthropist, Willem Zeegers had founded the organization in San Francisco more than two hundred years ago. Just to be inside the place and glimpse that legendary interior was an achievement in itself.

Lacey knew she was about to be called onto the stage at any moment, and she steeled herself as best she could. Yes, she’d make a point of enjoying herself, and the more information she discovered about the enigmatic club, the better. If she could gain the confidence of the highest bidder, the man whose submissive she was about to become; then she would have the story of the century to take to her editor. After that, her boss Vincent Carpetta would have no choice but to recognize her as a serious journalist—a journalist who always got the story.

Indeed, that afternoon while Rebecca and herself had been waiting for the auction to begin, they’d managed to slip away from the organizers tight control, and find the infamous East Tower. The imposing turret rose some three stories, defining the outside of the Gothic building, and creating a landmark for miles around. Unfortunately, the massive oak-paneled door that would gain them entrance had been securely bolted. While they’d stood there, looking at the antiquated cast-iron locks, they’d both shivered as though an icy-cold hand had run the entire length of their spines. Believing themselves to be rational thinkers, Lacey and Rebecca had dismissed the unnerving phenomena as merely a change in the temperature, and not something more sinister.

Several years ago, a young woman had reported seeing some bizarre happenings in and around the East Tower—weird stuff that defied logical explanation. Her crazy story about devil worship had caused an incredible amount of hysteria within the media. So much so that it prompted Club Incubus to issue a strong statement of denial. As with everything, the trail eventually went cold and interest in the story soon waned, becoming another one of those five-minute wonders that people remember and then forget within the space of an afternoon.

Besides, who would believe that a club secretly practicing devil worship would be named Incubus? It just didn’t make sense, because they’d be drawing unwanted attention to themselves.

With no real evidence of any wrongdoing, Lacey had zero justification for snooping around the club. However, the auction gave her the perfect opportunity to dig a little deeper, and besides, the origins of Club Incubus were both interesting and intriguing.

From the moment Willem Zeegers stepped onto dry land from the Pride of Hades more than two hundred years ago and formed the club, Incubus had been steeped in myth and legend. However, after researching the history in greater depth, something just didn’t sit right with Lacey. The journalist in her was like a dog with a bone, and demanded she seek out the truth, making sure that the constant trickle of rumors were just that—rumors. It wouldn’t be an easy job, but she was willing to pretend she was a submissive who was heavily into the BDSM scene. Lacey took her work seriously.

Shit. Am I really dumb enough to offer myself up for auction?
Talk about jumping in at the deep end.

Unsure if she was doing the right thing, Lacey took several deep breaths in an attempt to quash her natural reaction to make a run for the exit door behind her. However, even after several lungfuls of air, she still couldn’t quite regain her composure. The growing apprehension and excitement had finally gotten to her, and she fanned a hand in front of her face, only to lose her grip on the card that the auctioneer needed to read from.