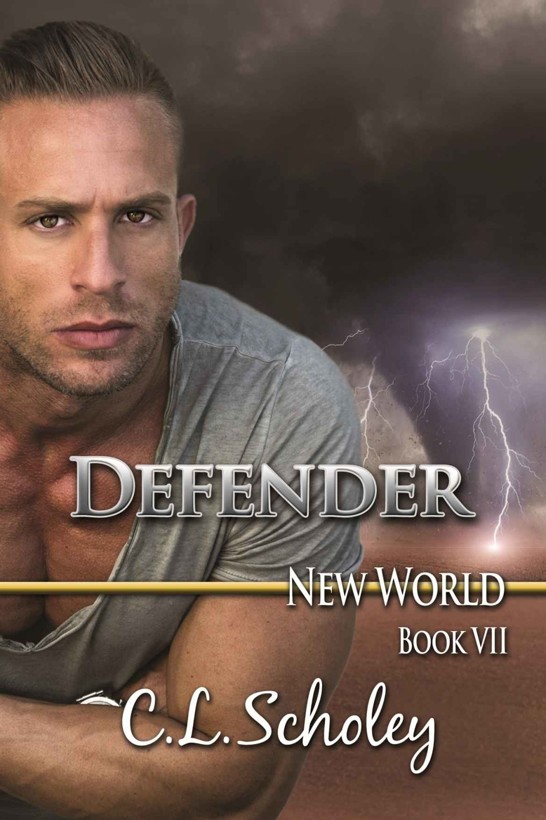 Names, characters and incidents depicted in this book are products of the author’s imagination or are used fictitiously. Any resemblance to actual events, locales, organizations, or persons, living or dead, is entirely coincidental and beyond the intent of the author or the publisher.

WHAT THEY ARE SAYING ABOUT
C.L. SCHOLEY

This is one married couple whose appetites for each other grow ever stronger with each passing year. They thoroughly enjoy discovering new ways to keep the spark alive and thriving. Allowing another couple to share in their fun only seems to increase the possibilities. Keeping the love alive is certainly not a problem for Mac and Jenney, which makes their escapades deliciously fun to read.
~ Coffee Time Romance

Abri is a strong female heroine. She didn't let deafness define who she is. Raiden is a likeable guy. Why? Even though Abri is deaf, Raiden picked her for his female. C.L. Scholey has done a terrific job of creating this futuristic romance series. We have action, romance, adventure & mystery all in 102 pages.
~ Romance Bookaholic Traveler

The Brethren of Tavish is a wonderfully written book. The characters are well rounded and bring you into the story as if you were really there. The story flows smoothly tying one part to the next. The plot is well thought out, giving you plenty of action...
~ Night Owl Reviews

Other Books by Author Available at Torrid Books:
www.torridbooks.com

Back to Our Beginning

“Mother, look what I have.”

Taz ran towards his mother so proud. He had his shield. Just like his father. He was a Tonan warrior. The grey body-hugging armor was indestructible and covered him from head to toe. He gripped her hands in his and laughed, careful of the sharp, long talons his fingers had become. She trailed a finger down his shield where his cheek was.

His mother knelt and as she hugged him his shield dropped, absorbing into his body. He pulled her against him and heard her groan. He released some of his pressure immediately, his shield, which resided within him, sent him a signal to gentle his touch. At five years of age, it was his shield’s first act of suggestion which he obeyed instinctively. The baby shield protecting both him and his mother was gone forever.

“Promise me, little warrior, you will be kind to females?” his mother asked.

“Of course I will, Mother.”

It was a silly promise. Females were weaker and needed a warrior’s protection. Taz sensed his strength; he was stronger than his mother. She needn’t have asked. He loved her more than anything in the world. His shield wouldn’t let him harm an innocent regardless. His mother whispered she loved him, she stroked his hair; her hand dropped from his head, and soon only Taz was returning the embrace.

Taz knelt as he lowered his motionless mother to the ground. His father raced into the room. He stopped in his tracks for a second before scooping up his wife and crushing her to his chest.

His father tilted his face to gaze at Taz then gathered him close. Their little family pressed together like they had so many times in Taz’s young life. Taz liked it best when father was home, mother was always happier.

“I’m sorry my son. I’m out of time. Your mother and I hoped I could find a cure. It wasn’t to be. I tried, I tried so hard. Your mother and I love you very much. I can’t live without her. I thought I could, but I can’t. My heart hurts too much for my shield to go up. Always remember it was a female who gave you life and a female who loved you more than anyone in this universe. Remember also it was a male Tonan who killed females.”

Taz watched as his father dropped. His parents crumpled together. Terrified, wide-eyed, Taz saw his father’s shield detach from his father’s insides with a horrific squealing sound, as though in great pain. Oozing from his skin in a tortured fashion. The shadow of the shield hovered close for mere seconds then rusted and turned to dust. The dust rolled away under the door and was gone.

Neither of his parents moved. It wasn’t like them to ignore him. His parents were doting and loving every day of his life. For them to suddenly stop talking to him hurt. Taz went to climb on his parents’ bed. Surely his mother would come hug him and ask what was wrong. For a long time he sat with his arms wrapped around his knees. There was no sound in the room except the short breaths he began to expel as time went on—and on. His tummy growled.

“Mother, I’m hungry. I don’t like this new quiet game you and father are playing. I want my dinner.”

His mother should be tousling his hair, claiming it was the blond of his father she adored so much. Taz would roll his eyes and claim he wasn’t a baby. But there was no tousling, no chiding, no food.

With his concern building, Taz took a blanket from the bed and draped it over his parents. They never slept for long, and father almost never. He wandered to the kitchen. Chocolate brownies were on the counter. His mother warned him they were an after-dinner treat.

“Mother I’m taking a brownie. I’m eating dessert first. I might take yours and father’s too.”

He placed his hand over his mouth and giggled. That would bring her running and scolding, scolding would be better than silence. He dropped his hand and shoved half the brownie in his mouth, chewed and grabbed another. “I’m taking two now.”

Taz sat on the floor with his fourth brownie. His tummy was mad at him and he could hear his shield telling him no more. With his head cocked to the side, Taz let his shield rise. In seconds, his belly settled and he heard the whispers of his shield. Father told him when the time came to listen to his ancestors. Parts of all related warriors created his shield; it’s what made it impenetrable.

Taz studied his long talon fingers; the grey glistened. There was nothing sharper on the planet than a Tonan’s shielded fingers. The razors whooshed through the air when he wiggled them. His shield whispered he was deadly.

The claws on his feet tapped at the slightly spongy floor. Everything in Taz’s life was geared to his shield. Outside, the ground would give way to his claws then spring back leaving no trace of him or where he once stood. The behemoth trees were covered in layers of soft sponge. Taz wondered if he would be as fast as his father. Taz hoped his father would wake soon.

Rising, Taz went to check on his parents. With his shield up he gazed at both parents. Thoughts flooded his mind.
Killed means dead
. Did that mean if he were deadly he could kill? He wasn’t certain what death was, Tonan warriors were supposed to be immortal. His father was two thousand years old. A scientist. It was rare for his father to battle. His father told him he battled using his brain. A brain was the greatest weapon in the universe.

Taz rolled his father over until he lay on his back. If his father was shielded he wouldn’t have been able to budge him. His father was tall and powerful. Even in his un-shielded state his father was at least a hundred pounds heavier than his mother, with his shield he would be hundreds of pounds heavier. When his father’s shield came back his mother would be in danger. It wasn’t like his father not to be careful around her; he shouldn’t place his arm across her unless he controlled the weight. The idea formed in his thoughts with whispers from his shield about females and his power.

His father was like the limp toy his mother knit for him when he was small. The shield at Taz’s hand dropped and he touched his palm to his mother’s cheek. Her eyes were open but her gaze went right through him. She looked to be in a place he would never see.

“You’re never going to wake up are you?” Taz whispered.

With tenderness Taz lifted his mother. She wasn’t heavy when he was shielded. The baby shield he and his mother had from conception formed into Taz’s new shield. The molecules hardened when they seeped through his skin covering him in grey from head to toe. His mother was vulnerable with no shield; it was why any family male warrior could shield her. Tonan warriors grew rapidly. By the age of nine he would be able to shield his mother and move without difficulty. He would have, if she wasn’t gone.

Taz placed her on the bed. His father was a big man, solid, heavier. Tax dragged him and with difficulty hoisted him up beside his mother. He covered them with a blanket. Taz dropped his shield and cuddled between them. He was a big boy his mother always said. Compared to his father he wasn’t. Tiny and insignificant was how his father described insects.

Am I tiny and insignificant?

Taz was alone. For a long time he lay there until the bodies of his parents grew cold. Outside darkness fell adding to his loneliness. Rain began to fall and Taz quivered. Father said the Tonans were developing rays to stimulate the clouds. A Tonan shield craved sunlight. If there was sunlight whenever the race chose they would be invincible to any species, not just Castians. A cousin race of ebony shielded beings his father loathed. As lightning sluiced along the skies, it appeared the scientists hadn’t made their dream of owning the atmosphere come true. Thunder crashed and Taz pulled the covers over his head and wiggled against his mother wishing she would wrap her arms around him.

She can never hold me again.

A cruel thought invaded; it was because of his mother his father died. It was because of a male Tonan his mother died. Who was there left to trust? Taz didn’t know. There was no one he knew besides his parents. They’d kept him hidden for his safety. Father had told him he couldn’t come out of hiding until he was grown. Father also promised him he would stay with him until he was old enough to take care of himself. Was he old enough? Taz wasn’t sure.

Throughout the long night Taz huddled with his parents. By morning the bodies were colder. Taz got up, washed his face like a good little warrior and packed food into a small satchel. His father and he had built a tree house in the woods high in the trees. Before he had to wait for his father to take him to it, Taz couldn’t climb on his own. His father would wrap a powerful arm around him and climb. Sometimes his mother went, but father enveloped her in his shield. Taz was a little jealous his father never tucked him away. For a moment he stood at the base of his parent’s bed.