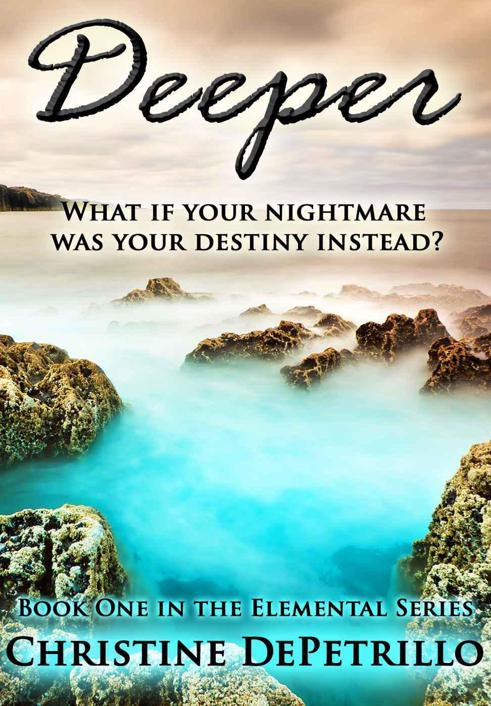 Book
One of the Elemental Series

This book or any portion thereof
may not be reproduced or used in any manner whatsoever without the express
written permission of the copyright owners except for the use of brief
quotations in a book review.

This is a work of fiction. Any
resemblance to actual persons, places, events, business establishments or
locales is entirely coincidental.

SNEAK PEAK
AT
HIGHER
, Book Two in the Elemental Series

To
all who have thought they’ve seen “something”

out
there in the ocean

Crystal Bawle yawned
for the billionth time. Her fist barely supported her chin while she leaned
against the front desk of Breezes Resort in Horseshoe Bay, Bermuda. If she had
another sleepless night, another night packed with nightmares, she would rent a
boat, sail directly to the center of the Bermuda Triangle, and let the
mysterious zone swallow her. She swore she’d do it this time.

“You look like shit,
Crys,” Rionne D’Agestine, Breezes Resort’s Perkiest Employee announced. Funny
thing was Crystal had been out with Rionne a few times.
Perky
was so not
the word to describe her. Pessimistic, perturbed, pissed. Yep, all those fit.
Perky? No.
The
only thing
perky
about Rionne were her boobs, their overinflated glory
bound and boosted to add some allure to her otherwise bitchy demeanor.
Day
after day, male customers changed lines to be serviced by Rionne at the front
desk instead of Crystal, whose own boobs were less than perky. Less than plump,
less than protruding, less than perfect.

“Did you hear me?”
Rionne tapped her pen on Crystal’s forearm. “You look like death.”

“What happened to
looking like shit?” Crystal took a step away from the front desk, but could
hardly manage to move her gaze to Rionne’s face. Her eyes felt as if someone
had removed them, used them as beach balls for the afternoon, then put them
back full of sand. A lovely side effect of not sleeping a damn wink.

“I had to downgrade for
the sickly gray bags under your eyes. I mean, you always look somewhat
zombie-esque, but it’s really bad today. Totally not attractive.” Rionne
flipped her straight blond hair off her sun-tanned shoulder, her full, pink
lips turned down in disapproval.

Crystal opened her
mouth to reply, but another yawn overtook her.

“You’ve got to ease off
on the partying, mon amie.” Rionne perched herself on one of the stools behind
the front desk and crossed her impossibly long legs. Allowing her sandal, one
with complicated straps and a cork heel, to dangle from her toes, she said, “Tell
me it’s wild sex keeping you up at night. Your appearance would be worth it if
the sex was mind blowing.”

Sex? Ha! I barely have
enough energy to bathe myself, never mind have sex. Besides, who the hell would
be my partner? Rionne reels in all the cute ones.

Crystal shook her head
and immediately regretted it. With no sleep came whopping headaches. She was
used to no sleep. Hadn’t been dozing productively since she was a teenager, but
her teenage body hadn’t cared. It could still keep up. She’d fudged her way
through her twenties with lots of energy drinks. Now that she’d turned thirty,
however, and all she had to show for her life was a stupid Breezes Resort name
tag, her body just couldn’t manage on so little sleep anymore. She didn’t even
dream of a full eight hours either. She’d give her right arm for just twenty
minutes of peaceful slumber. Twenty minutes. Was that too much to ask?

“Do I really look that
bad?” Crystal squinted at her reflection in the black granite covering the
front desk. While she couldn’t see the color of the bags Rionne had so
graciously pointed out, she could definitely see their size. And a trio of
nasty pimples on her chin. And a few wild strands of long, wavy brown hair that
had escaped from her ponytail. Actually
escaped
wasn’t the right word.
That would mean she’d attempted to get those strands into the ponytail in the
first place, which she hadn’t. Why bother?

Oh how Crystal longed
to punch that well-rested face.

Instead, she let out a
groan and rested her forehead on the cool granite. “You want to dig a hole
tonight, drop me into it, and bury me?” She pressed her cheek into the desk and
closed her dry, scratchy eyes. Maybe she would find some sleep six feet under
the ground. It’d be worth suffocating just to try.

“Nope. I have a date
tonight, and I’m too busy to play in the dirt for your sorry ass, Crys. Go see
a doctor or something.”

A doctor. Now there was
an idea. Only the last quack she went to pumped her full of medication that
made her feel a hundred times worse. The one before that told her to meditate
before going to bed. The one before that had suggested exercising more so her
body would be tired.

Her body
was
tired,
dammit. So tired, but it refused to grant her sweet repose.

The nightmare was
always the same.

Water. Everywhere. All
around her.

One moment the Bermuda
sun beamed down on her face, warm and bright. The water lapped gently against
her skin. Her legs kicked rhythmically keeping her afloat. She bobbed like a
happy rubber ducky.

Then the blue sky
turned stormy black and lightning zapped down to the water’s tumultuous
surface, sending waves of electricity directly into her. The violent jolts
stole her breath away. Paralyzed her limbs. Sucked her under the dark depths of
the ocean. She tried to swim, tried to break through the surface, but her body
was useless and the water would not allow her. It wanted her. It intended to
keep her. Locked in the great blue abyss.

Heaving in a deep
breath now, Crystal rocked her head back and forth, not looking forward to the
nightmare’s encore performance the moment she crawled into bed tonight. Why she
attempted to sleep anymore was a huge question mark. The moment her eyes
closed, she’d be drowning all over again. Hence her constant state of
unquenchable drowsiness. She’d tried moving to Vermont, a state not bordered by
water, but that didn’t change a thing, besides give her chapped lips and dry
skin during the freeze-your-ass-off winters they had up there.

Crystal was
semi-comfortable slouched on her stool, so she didn’t raise her head. Rich male
voices usually meant Rionne would take this customer anyway.

God, that was some
voice.
Crystal felt its vibration deep down in her core.
Still, she didn’t have the energy to lift her head. Besides, Rionne was already
handling Mr. Sexy Voice.

“No, she’s not okay,”
Rionne said, “but you’re not here to discuss my associate, are you, Mister…”
She dragged out the word, waiting for the guest to fill in the blank.

“Doctor Ray Taimen.”
The voice caressed Crystal’s insides and she nearly sighed. “And I think I
would like to at least
see
your associate if not discuss her exactly.”

A sharp jab to
Crystal’s side had her sitting upright before she had decided to reveal
herself. “Rionne! Ouch.”

It took a moment for
her battered eyes to adjust to the blazing sunshine backlighting the man,
revealing only his tall, shadowy outline. When the details of Doctor Ray Taimen
came into focus, Crystal suddenly felt completely awake.

His sea-green eyes
glittered like sun reflecting off water. His jet-black hair hung to his
slightly bearded jaw, giving him a roguish pirate ambiance as he chuckled.

“What’s so funny?”
Crystal asked, blinking to try to take in more of him.

“You think I’m
beautiful.” He set his bags down then leaned against the front desk on
well-muscled arms. He smelled like sea air and warm sand.

“Shit,” Crystal
whispered. “Did I say that out loud?” Lack of sleep was turning her into a
moron.

“Well, I take it back.”
Crystal shook off her fatigue, smoothed out her tacky, flowered uniform shirt,
and woke her computer. “Here to check in?”

“No, you can’t take it
back, and yes, I’m here to check in.” His words were music, soothing all the
tension out of Crystal’s shoulders and neck. All the tension from being awake
night after night.

She rolled her
shoulders, marveling over the looseness of them. “I
can
take it back. I
said it, and I can un-say it.”

He shook his head. “It
already reached here.” He pointed to his left ear, where a simply fantastic scar
bolted artistically down toward his jaw. “Can’t be erased.”

“Fine.” Crystal opened
the check-in program. “What was your name again?”

“Doctor Ray Taimen.” He
squinted those amazing eyes at her name tag. “Tell me your last name is not
pronounced how I think it is.”

“Her parents were
stoned when she was born. For sure.” Rionne’s attempt to insert herself into
the conversation did not work. Doctor Beautiful didn’t take his eyes off
Crystal.

“My parents probably
were stoned.” That would certainly explain her messed up psyche. “I don’t see
the future if that’s your next question.” Though a sweet vision of him naked
filled her head. His entire body was as toned as his arms, and Crystal had to
bite back a sigh. In the vision, he looked truly delighted to touch her.

“You sure about not
seeing the future?” He smiled wickedly as if he’d seen her vision, and Crystal
fumbled with the credit card he’d handed her to pay for his room.

She swiped it through
the computer, resisting the urge to leap over the front desk and throw herself
at him. “I’m sure.”

“We’ll see.” He
accepted the room keycard, picked up his bags, and sauntered off toward the
elevators. His black pants highlighted a phenomenal backside and two long,
sturdy legs. The plain white dress shirt he wore untucked hung off broad
shoulders that Crystal wanted to massage.

“He was weird.” Rionne
settled back on her stool, adjusting her uniform shirt so her cleavage was at
maximum perk.

He was something all
right. Crystal wasn’t sure what just yet.

The hotel room was as
he’d expected. Lots of framed pictures of beach scenes. Tropical flowers on the
bedspread. Seashell decorations all over the bathroom. None of that concerned
Doctor Ray Taimen. The only thing that mattered was how close the room was to
the water.

He set his bags down,
opened the French doors, and stepped onto the balcony. Filling his lungs with
sea air, he scanned the sprawling ocean before him. He would have preferred a
first floor room with direct access to the water, but the third floor wasn’t
bad. The stairs down to the beach were close. He could get to the water
quickly.