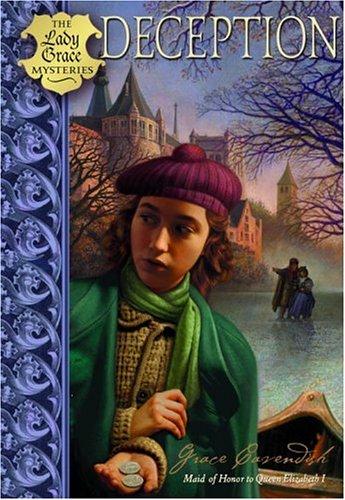 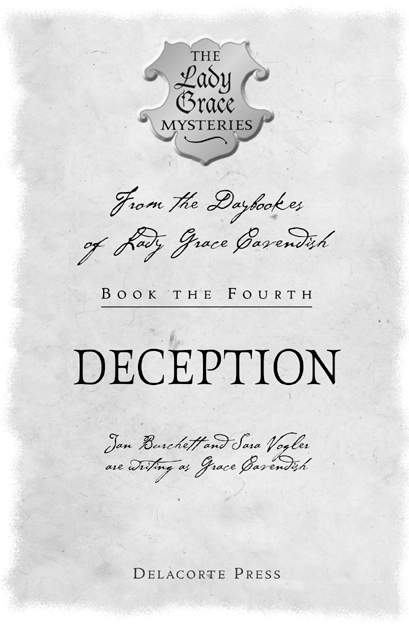 FOR MINE OWN EYES AND NONE OTHER!

MAID OF HONOUR TO HER GRACIOUS MAJESTY

QUEEN ELIZABETH I OF THAT NAME

AT HER MAJESTY'S PALACE OF WHITEHALL,

THE TWENTY-THIRD DAY OF NOVEMBER,
IN THE YEAR OFOUR LORD 1569

to begin writing in it! I am determined to keep this book neat and tidy with my best lettering through-out—and not make it look as if a drunken spider has crawled over it.

I am seated on a cushion with the other Maids of Honour in the Queen's Presence Chamber awaiting Her Majesty's arrival. She is busy with matters of state. We have a huge fire, for it has been mightily cold this last week. Indeed, the river Thames itself has frozen! The ice is thick enough to walk on and everyone is talking about the Frost Fair that has been set up on the frozen water near the landing steps to
the Inns of Court. It is so exciting! We hope to visit today, when Her Majesty has finally finished with boring state business.

Outside, the ice and frost look very inviting, but inside it is gloomy and we have much need of candles. The other Maids are working at their embroidery and Mrs. Champernowne, Mistress of the Maids, is scowling at me for not doing the same. She looks ready to pounce the instant I make the tiniest ink blot upon my kirtle. But she dare not chide me too much, as Her Majesty herself gave me this daybooke and my fine quills and ink bottle. Ha, ha, Mrs. Champernowne!

The Queen is my favourite person in the whole world. She has taken me under her wing and often shows me great kindness, because—

Hell's teeth! I have nearly spoiled my book already. I had to duck from a flying cushion. It would seem that the matters of state did not go well, for the Queen has just burst in and is now roaring round the chamber like a baited bear.

I'm not sure I should compare Her Majesty to a bear—baited or otherwise. However, this daybooke is for my eyes alone, so I don't think I shall have my
head cut off! Besides, as I was about to write before the cushion interrupted me, I am a favourite with Her Majesty the Queen (except when she throws things). She has never forgotten that my dear mother, God rest her soul, died saving her life last year. My mother was Her Majesty's close companion, and the Queen was almost as sad as I was when she died. So she made me a Maid of Honour, though I was only twelve, and vowed to protect me always. And now I am also Her Majesty's secret Lady Pursuivant. If she should cut off my head, who would then pursue all wrongdoers who trouble the Queen's peace?

Oh, dear, Her Majesty is glaring our way. I shall put my daybooke away for a while before some accident befalls it.

The royal storm has now abated—but it was most exciting while it lasted.

Her Majesty paced up and down, flapping a letter she'd just received, looking as if she would breathe fire on the poor messenger, who cowered in the doorway waiting for an answer.

“What do you think is in that letter?” Lady Sarah whispered.

“Mayhap there is another problem with the new coin Her Majesty is having minted,” Mary Shelton suggested as she laid down the bonnet she is embroidering for her new niece.

“What problems are those?” asked Lady Jane, wide-eyed.

I was surprised that Lady Jane could have missed the tantrums and countless changes of mind the Queen had had. It had taken Her Majesty months to choose a design that pleased her. Mr. Anthony, her engraver, was up to the palace with new designs almost every day.

We were all greatly relieved when Her Majesty finally declared that the pattern of a griffin rampant would adorn the new, pure silver coin. Her Majesty told me once that she thinks the griffin to be the epitome of nobility, with its head of an eagle and its body of a lion. I think it looks a bit ugly, but I wouldn't tell the Queen!

Lady Sarah sniffed and shook her coppery locks. “Your ears are stoppered unless people are talking about you,” she told Lady Jane.

There is not much love lost between Lady Sarah Bartelmy and Lady Jane Coningsby. They each consider
themselves the most beautiful of the Maids, and it leads to a good deal of bickering. They both want to make good marriages, and they see themselves as rivals for the favours of the young gentlemen of the Court. I myself have no time for such silliness.

“How dare you! You foolish flax-wench!” spluttered Lady Jane.

“But I thought the problems with the coin had all been settled,” said Penelope Knollys.

“Silence!” bellowed the Queen from the other end of the chamber. “May I not have a second's peace to think?” And she looked about her for another missile to throw.

We ducked our heads down and busied ourselves with our work.

As there was nothing within reach, the Queen went on with her pacing. She always looks particularly impressive when she's angry, with her flame-red hair and her flashing eyes. Her white silk gown swished as she marched and her pearl ropes rattled with every step. Even the gold embroidery on her gown seemed to flash in temper.

She wrestled with the letter as if about to tear it into shreds. “I cannot believe it,” she said through clenched teeth. “Finally, all is well with the design of
my new coin, and now Sir Edward Latimer dares to write me from the Royal Mint that there is not enough silver there to mint it! By heaven, they shall find silver quick enough when they hear of my wrath!”

There was a whimper from the doorway and I thought the messenger was going to faint.

“Get you to Sir Edward with all haste,” the Queen bellowed at him, “and tell him that he shall sort this business immediately or I shall remove him from the post of Mint Warden.”

The messenger bowed his way out, and we heard him scuttling down the corridor.

The Reluctant Swordsman by Dave Duncan
Tegan's Power (The Ultimate Power Series #4) by Cosway, L.H.
The Wild Duchess/The Willful Duchess (The Duchess Club Book 1) by Renee Bernard
The Other Girl: A Midvale Academy Novel by Sarah Miller
To Love and To Perish by Laura Durham
Hit and Run by Sandra Balzo
A Man After Midnight by Carter,Beth D.
A Wedding in Red Creek: Rori and Jackson (The Sons of Dusty Walker Book 9) by Randi Alexander
Ties That Bind by Kathryn Shay
For Cam (Chicago Syndicate Book 4) by Naomi, Soraya