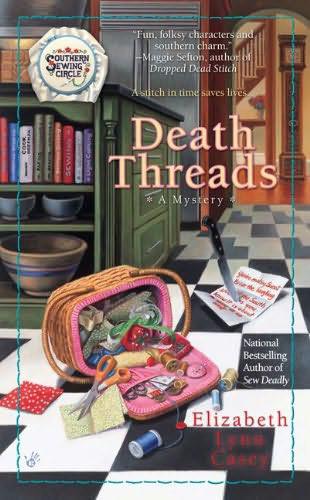 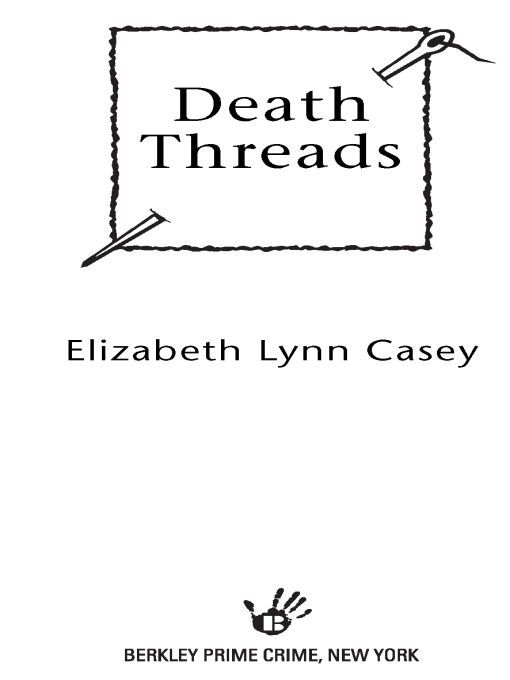 Table of Contents
Title Page
Copyright Page
Dedication
Chapter 1
Chapter 2
Chapter 3
Chapter 4
Chapter 5
Chapter 6
Chapter 7
Chapter 8
Chapter 9
Chapter 10
Chapter 11
Chapter 12
Chapter 13
Chapter 14
Chapter 15
Chapter 16
Chapter 17
Chapter 18
Chapter 19
Chapter 20
Chapter 21
Chapter 22
Chapter 23
Chapter 24
Sewing Tips
Sewing Pattern
Unwound
“Colby? Colby?”
Debbie’s panicked voice preceded her down the staircase and sent Tori’s pulse racing once again. “Debbie, what’s wrong?”
“Colby . . . he’s not in his bed . . . he’s not upstairs anywhere.” Debbie rushed through the parlor and into the kitchen, lights flipping on in every room she entered. “With that sleeping pill I gave him he shouldn’t be wandering around. He shouldn’t even be a—”
A low guttural moan escaped Debbie’s lips as she stopped halfway through the kitchen, her feet moving backward as she bumped into Tori. “Oh no . . . oh no . . .” Her voice trailed off, only to return in a shriek as she pointed at the floor in front of them. “Oh no!”
Stepping around her friend, Tori stared at the knife jutting from the linoleum kitchen floor with a hastily scrawled letter beneath its handle.
Careful not to touch anything, Tori leaned in as close to the note as possible, her stomach churning violently as her gaze fell on the faint red spatters that dotted the otherwise ordinary white stationery paper. Faint red spatters that looked a lot like—
“Oh my God. Debbie, call the police . . . now.”
Berkley Prime Crime titles by Elizabeth Lynn Casey
SEW DEADLY
DEATH THREADS 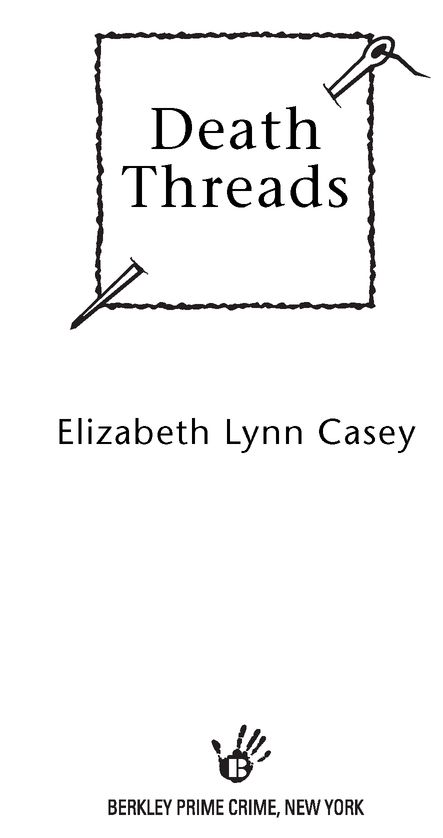 To Dr. Barry A. Singer, MD, Heather Popham, and the rest of the folks at the MS Center for Innovations in Care . . . Thank you.
Chapter 1

Tori Sinclair had always prided herself on being a relatively calm person—the kind of woman who kept a cool head and a professional demeanor at all times. The kind of woman who steered clear of mindless watercooler drivel in favor of more intelligent and meaningful conversation.
And, technically, she still was that woman.
But only because the Sweet Briar Public Library didn’t have a watercooler.
What it did have at that moment, however, was Colby Calhoun—the dark-haired, smoldering gray-eyed hunk of manhood that left women drooling in his wake for miles.
It didn’t matter one iota that his brow was furrowed in distress or that his hands were flipping through a pile of books at mach speed, completely oblivious to the eyes of nearly half of the Sweet Briar Ladies Society Sewing Circle who’d stopped by for a quick chat yet stayed to gawk. It didn’t matter that the nearly crater-sized dimples that made them all swoon hadn’t appeared even once since he arrived. And it didn’t matter that he’d bypassed his infamous chest-enhancing button-down shirts in favor of a ragged old run-of-the-mill T-shirt.
The only thing that mattered was the great view he afforded over the ever-growing stack of books that graced the information desk. Books Tori knew she should shelve, but couldn’t bring herself to move. Not before he left anyway.
“Would you just look at those hands? And those eyes? How on earth Debbie can drag herself out of bed every mornin’ when that’s lyin’ next to her is beyond me.” Margaret Louise Davis leaned her plump sixty-something frame against the maple counter and sighed. Heavily. “Because if it were me, I wouldn’t move. Ever.”
“If it were you, my dear twin, he wouldn’t look like that.”
“Leona Elkin!” Tori reprimanded sharply, her voice echoing across the large room and drawing more than a few disdainful looks in their direction. Feeling the instant heat to her cheeks, she raised an apologetic hand in the direction of her patrons then pinned her friend with a disapproving look to rival all others. “What an awful thing to say to your sister. Margaret Louise is a—” She stopped, cast a slow glance down her friend’s polyester-clad body as she searched for the perfect description. Something that would do justice to the warm and witty woman who’d grown to be one of her dearest friends despite their age discrepancy of nearly thirty years.
“A what, Victoria?” Leona prompted as her carefully tweezed eyebrow arched upward in amusement.
“A-a study in perfection,” Tori offered. She tilted her head to the left, a strand of light brown hair grazing her cheek as she considered the woman who had stood by her side through thick and thin, helping her to not only consider Sweet Briar as home but to embrace it as well. “She’s the most amazing cook I’ve ever met . . . she-she’s laugh-out-loud funny without even realizing it . . . she has the most infectious smile I’ve ever seen . . . and she’s the epitome of what a grandmother should be.” Raising her own eyebrow in triumphant fashion, she folded her arms across her lilac-colored blouse and leveled a look of challenge at her self-proclaimed mentor. “So there.”
“Very good, Victoria. I can see my coaching has been relatively successful thus far. You’ve managed to put just the right positive spin on my sister’s qualities like the good southern girl in training that you are. But let us not forget that southern girls are only sweet and kind when a man is not involved. Which, of course, there is.” Leona gently swept her pink-tipped fingers through her salon-softened gray hair and peered at the object of their bickering over her stylish glasses. “And no matter how many of my noteworthy qualities may be running parallel through Margaret Louise’s body, one thing remains unchanged. That”—she gestured her bejeweled hand toward the well-built man hunched over an open book in the corner of the library before bringing it to rest on her fraternal twin’s shoulder—“would never look twice at this.”
“And he’d look twice at you, Leona?” Rose Winters, the oldest of the group, pulled her cotton sweater tightly against her frail body and snorted.
Tori couldn’t help but giggle as Leona’s mouth gaped open and the color drained from her cheeks. “I-I wasn’t saying he’d look at me.”
“That’s good. Because if you were, I’d have to rethink your recent lack of judgment,” Rose hissed as she raised a bony finger in Leona’s direction. “First, your despicable fling with that detective from Tom’s Creek . . . and now this?”
“Despic-flin-I-didn’t,” Leona sputtered.
Margaret Louise’s eyes danced as her face stretched into a mischievous smile. “Oh yes you did, Twin. You were all fired up ’bout Daniel McGuire from the moment you laid eyes on him. I believe you said somethin’ about a uniform and snug packaging at the time.”
“And don’t forget his gun. She really liked that part, remember?” Tori interjected around nibbled lips that threatened to release an entirely too-loud laugh.
“It was despicable,” Rose interrupted firmly, “because you let your replaced hormones run amuck in favor of your friendship with Victoria.” The retired schoolteacher jutted her chin into the air as she stared pointedly at Leona. “And while you may hide your age better than the rest of us old-timers with your fancy clothes and Poga-fied rump—”

Day, Xondra - Our Dirty Little Secret (Siren Publishing Ménage and More) by Day, Xondra
Dark Before the Rising Sun by Laurie McBain
The Vanishing by John Connor
Red Ice by Craig Reed Jr
Unlock Yourself (The Desires Unlocked Trilogy E-Short Part 0.5) by Blake, Evie
From Pack to Pride by Amber Kell
Falling for Her Soldier by Ophelia London
Savor (Cottonwood Falls, Book 5) by Aliyah Burke
Heart in Wire: A by a Thread Companion Novel by R L Griffin
Demons of the Dancing Gods by Jack L. Chalker