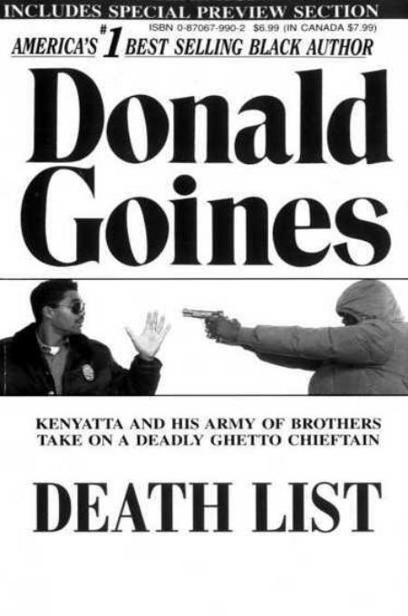 "A flashing talent straight from the streets of the lost."

'After Chester Himes. the "Serie Noire" could not overlook Donald Goines. the most interesting black crime writer in many years. Goines writes with guts 'n blood."

"What is great about Goines is that you feel you've become more intelligent once you have read his stories of pain and grief. His stories almost have an ethnographic value."

" . .dives into the hellish world of the ghetto dear to Chester Himes. minus the humor. Policemen shoot before asking questions. Fear and hatred can be read on all faces."

The Kingfisher let out a high-pitched scream that would have done a woman justice. Then the tall, tan-complexioned man began to scramble toward the waiting car. He had to shove some of his bodyguards out of the way, but he managed to throw himself through the front door of the waiting Cadillac before the Ford reached them. Some of his gunmen, made out of better stuff, held their ground, pulling guns from under their coats. But the pistols were no match for the bursts from the submachine guns as the car roared past. All the bullets that struck the Cadillac bounced off because the car was bulletproof. But the men standing on the sidewalks weren't. They fell as if someone had cut them down with a mowing machine!

THE TWO DETECTIVES had been sitting in their office at the downtown police precinct since early morning, waiting for one phone call. When the telephone finally rang, both men leaped to their feet. The black officer beat his white partner to the phone. He winked at his friend, letting him know that this was the call they had been waiting for.

The tall, chisel-faced white man walked back to his old beat-up desk and sat down. Detective Ryan drummed his fingers on the top of the well-scarred desk as he waited impatiently for the call to come to an end.

Finally the tall black man hung up the phone. "Well, what the hell are you going to do," he yelled over to his partner as Ryan jumped to his feet, "sit there on your dead ass all day?"

"Screw you, Benson, you cocksucker you," Ryan yelled back as both men moved hurriedly towards the door. "Did the informer give up all the information we need?"

Detective Edward Benson slowed down enough to show Ryan a piece of paper on which he had hurriedly written down an address. "We've got the bastard's address, just like he said he'd get."

The two men walked hurriedly down a short corridor that led into an outer office. The detectives threaded their way through the cluttered office, greeting the men and women over the hum of the old-fashioned air conditioner.

As the black and white detectives neared the outer door, two younger detectives sitting nearby came to their feet. Neither man appeared to be over twentyfive years old, while Benson and Ryan both had wrinkles under their eyes that were not there from lack of sleep. Both of the older detectives appeared to be in their late thirties or early forties. They were replicas of what the younger men would look like in ten years if they stayed on their jobs as crime fighters. The work would take its toll.

The two young white detectives ignored Benson and spoke to his partner. It was done more out of habit than to slight Benson deliberately. "We were told to wait for you, sir, that you might need backup men," the taller of the two said.

Ryan stopped and stared at the men. He hadn't missed the slur to his black partner. "I don't know," Ryan answered harshly. "It's up to my senior officer, Detective Benson." He nodded in the direction of the black officer.

The two young white detectives glanced down at the floor in embarrassment. Neither man wanted to come out and ask Benson directly if they could go along, but it would be a good point on their record if they could be in on the arrest of two murderers.

"What do you think, Ben?" Ryan asked his partner, breaking the silence.

Benson glanced coldly at the two younger officers. "It's up to you, Ryan, if you think you might need some help arresting the punks." He shrugged his shoulders, showing by his actions that he really didn't want the men along.

Ryan knew what the problem was. If the men had spoken to Benson when they first walked up, he would have taken them along gladly. But now he didn't want to be bothered with them. It was written all over his face. In the years Ryan had worked with him, he had come to find that the intelligent black man was extremely sensitive. At times, it seemed as if he was too sensitive. Ryan started to tell the young men to come along anyway but changed his mind. There was no sense in antagonizing the man he had to work with.

As Benson went out the door, Ryan turned to the two men sheepishly. "Well, I guess there won't be any need for your help after all. It shouldn't take four of us to bring in two punks."

It was apparent that the two men were disappointed. One of them started to say something but decided against it. Their brief exchange hadn't gone unnoticed by some of the other officers in the department. Most of them had been aware of what the men had been waiting for. As Ryan went out the door, leaving the men behind, the workers in the office glanced down, not wanting to catch the eyes of the rejected men.

Ryan caught up with his partner in the garage underneath the station. This was where they brought their prisoners. They took them out of the cars, still handcuffed, and led them to the three elevators that were located in the center of the garage. No matter where a policeman parked, he didn't have far to go to transport his prisoner. There were two uniformed policemen stationed in the garage at all times to help, if help was ever needed. The garage was also a good place for the policemen to kick the shit out of their prisoners, out of sight of any watching eyes. The garage detail never went against another officer, no matter how brutally policeman might treat a handcuffed prisoner.

Love Not a Rebel by Heather Graham
When the Walls Fell by Monique Martin
New Ways to Kill Your Mother by Colm Toibin
Amanda in Alberta: The Writing on the Stone by Darlene Foster
What If? by Randall Munroe
The Proposition by Lucia Jordan
It Must Have Been the Mistletoe... by Kate Hoffmann
Cloudy with a Chance of Boys by Megan McDonald
Imperfectly Real (A Series of Imperfections) by Woodward, A.E.
Live By The Team (Team Fear Book 1) by Skaggs, Cindy