Death in the Middle Watch 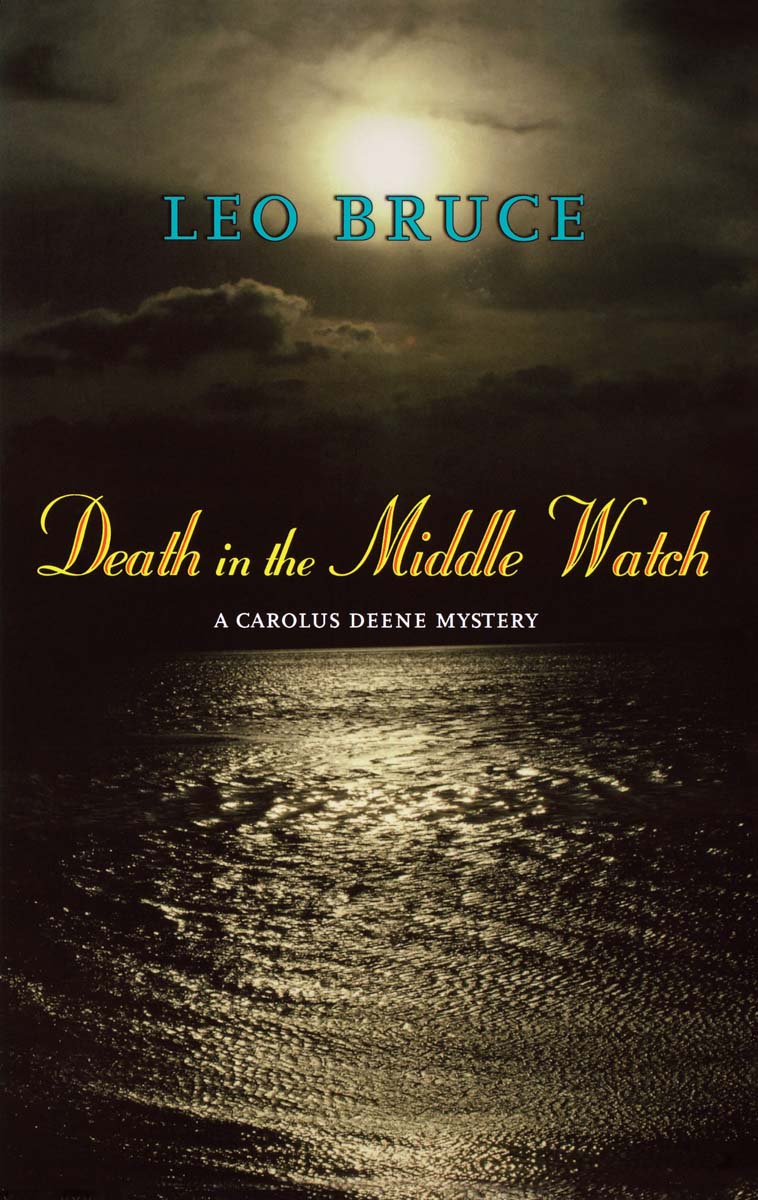 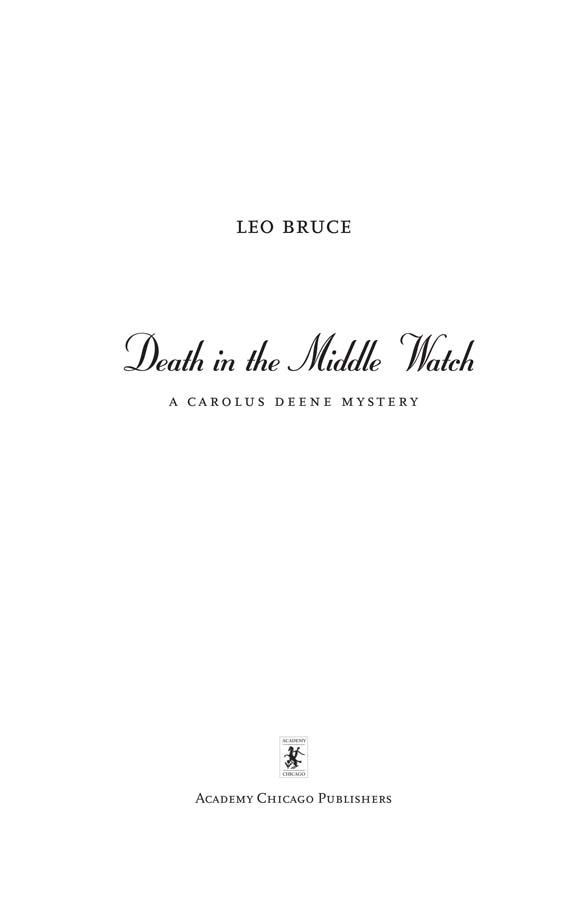 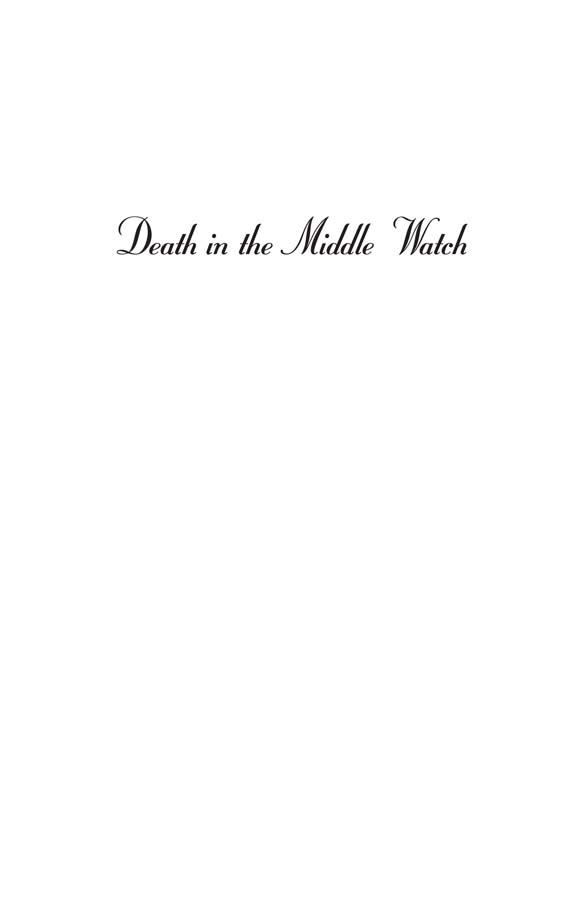 Printed and bound in the U.S.A.

No part of this book may be reproduced in any form without the express written permission of the publisher.

“A
MAN DIED ON
one of our cruises a year ago,” said Mr Porteous. “I don't want it to happen again.”

Carolus looked at him coldly, thinking how obvious some people can be. Of course he didn't. The successful proprietor of Summertime Cruises was scarcely likely to want deaths to occur on the ships he chartered.

“How did it happen?” he asked.

“A Mr Travers. He just died. Nothing particular about it. He and his wife occupied separate cabins because he snored. The steward found him cold when he took him his tea in the morning. Might have been heart. He was a rich man too,” he added as though heart disease was an affront to one who can afford to avoid it.

“What did the doctor say? Or didn't you carry a doctor?”

“Of course we did. I know the regulations. But unfortunately Dr Yaqub Ali was indisposed himself at the time. Seasick, you see. I don't know how a man can take a job as a ship's doctor when the slightest little swell turns him green and sends him to his cabin. He made an examination but I'm afraid it may have been a rather perfunctory one.”

“Yet you buried him at sea?”

“His wife insisted on it. There was one thing poor Mr Travers had always wanted when he went, she said: it was to
be buried at sea. He came from seafaring stock, I believe, though he himself was a bookmaker. I was against it. Rather morbid for people on a holiday cruise I thought. But the Captain persuaded me â¦”

“Oh, you were on board yourself?”

“Actually, no. But of course Captain Scorer was continually in touch with me. He considered that so far from upsetting the cruisers, as we call them, a burial at sea would make a nice change. They get rather tired of deck quoits, you know, and he would conduct the service himself as he was required to do. I considered that if that was his view he should go ahead, and afterwards we had no complaints.”

“Well, cruisers are apt to complain of the slightest thing. They might have said it ruined their holiday and claimed goodness knows how much in damages. We've had that before now when a woman went mad just before we reached Las Palmas and tried to throw the baby of some other passengers overboard.”

“Well, no. But it was a near thing. If it hadn't been for the deck steward having the presence of mind to shout to her that her knickers were showing while the mother of the child grabbed it back I don't know what would have happened. People will complain for the slightest reason.”

“But to return to the man who died. You didn't suspect what is called âfoul play', I suppose?”

“Not at the time. We thought, the doctor and all of us, that it was a heart attack. But when these letters began to arrive, I had my doubts.”

“You haven't told me about those.”

“You shall see them. Type cut out of newspapers. You know the sort of thing. Posted in Paddington. Threatening
that the cruise would end in disaster. The sixty-fifth cruise, that is, of the
Summer Queen
. All our ships are named
Summer
. There's the
Mediterranean Summer
, the
Southern Summer
, the
Atlantic Summer
. A gimmick, of course, but it works. It was on the
Summer Queen
that the man died, and it's the
Summer Queen
sailing on June the second, that we've received these letters about. They're the reason why I've come to you.”

“Have you reported them to the police?”

“Yes, but the police can't send men on a cruise, can they? It would soon get about among the cruisers. There'd be complaints at once. I thought you would never be noticed.”

“I can't say I'm very keen on the idea. A cruise to Cyprus doesn't sound my idea of a holiday. Especially with â¦”

“Oh, we're not overbooked, There'll be plenty of room. You could even bring a guest.”

That seemed to interest Carolus.

“If I do come,” he said, “I should want to invite three guests.”

“Three? I'm afraid that would entail rather a lot of expense to the company.”

“Or the other hand, I should not charge a fee for my services.”

“And you would try to discover what these letters are all about? You'd prevent anything more happening?”

“I take it your guests would all be â¦ female? They would add to the gaiety of the cruise?”

“I'm afraid not. The only female would be my housekeeper, Mrs Stick. She has been with me many years. A holiday would do her good.”

“And the other two?”

“Naturally. And the third?”

“My previous headmaster. Mr Hugh Gorringer. He might add to the gaiety of the voyage. It depends on what kind of sense of humour you have. I find him quite amusing.”

“Are these the only conditions you would consider? I would prefer to pay a fee. Anything within reason.”

“Mr Gorringer is certainly within reason. So are the Sticks. Yes, I'm afraid those are the only terms on which I would accompany the cruise.”

“I shall have to consider it. It's our best cruise, you know. A real luxury holiday. Lisbon, Tunis, Famagusta, Gib and home. All interesting places. The longest distance we run. The net cost of three passages â¦”

“I'll leave you to decide,” said Carolus. “Those will have to be my terms. And I can't promise startling results.”

“You see, we don't know yet that anything very serious is going to happen. It may all be unnecessary. Your housekeeper is middle-aged?”

“We need young people who dance and that sort of thing. Our officers are specially chosen.”

“For what? Their looks?”

“Let's say their appeal. I have considerable experience in organizing cruises, Mr Deene. There is nothing that makes for success more than a crowd of young officers who give some attention to their passengers.”

“And some, I hope, to the navigation of the ship?”

“Of course,” said Mr Porteous briefly. “I suppose we shall have to agree to your terms. We must find out what these letters mean. We can't have any more heart attacks. It will give us a bad name.”

“Will you accompany the cruise?”

“If you advise it, yes. I don't want to. I'm a home bird, really. Live in Sevenoaks. The wife won't come in any circumstances. She says the food upsets her.”

“Too good. Rich, you know. We pride ourselves on that. Plenty of choice. But my wife believes in simple things. Cottage pie. Fish and â¦ fried potatoes. That sort of thing. You can't have that on a Cruise. There'd be complaints at once. Breakfast's the only meal when you can supply what people are used to. Otherwise an all-French menu. You should see one of them. You would hardly recognize â¦”

“I've no doubt. Mrs Stick will certainly enjoy herself.”

“Mrs Stick? Oh, yes. Your housekeeper. I hope so. Perhaps she can contribute something to the ship's concert. Does she sing?”

“I don't know. I've never asked her. Mr Gorringer will be your man for that. Conjuring or ventriloquism. Most talented. But we have business to settle, haven't we? I would like to check up on the bookings. And I suppose you keep a file on the ship's personnel? I must examine these before we sail.”

“Do. By all means. I shall put myself in your hands. Do you wish the crew to know that you have my authority?”

“Certainly not. I must make a firm condition that no oneâ absolutely no one, Mr Porteousâknows that I am anything but an ordinary passenger. I hope we are agreed on that?”

“And I must tell you that I take the matter seriously.”

“I'm very glad to hear it. It
is
a serious matter. You'd he surprised how quickly people imagine there's something wrong with a ship. You can't expect them to make bookings if they think they're going to be murdered, can you?”

Carolus was getting rather bored with Mr Porteous.

“We must prevent anything like that happening again. These letters are most disturbing to me. Most disturbing. I'm afraid I may be blamed afterwards if anything happens for not making them public. But how can I? We should never get a booking.”

To discourage Mr Porteous from continuing. Carolus asked to see the letters and spent some minutes examining them. After a silence he said, more to himself than to Mr Porteous, “You know what these remind me of? The letters Jack the Ripper frequently sent to the police.”

“Jack the Ripper? Surely you are not going to suggest that these letters have been sent by a homicidal maniac?”

“I merely said that there is a resemblance between these letters and his. They are obviously intended to frighten you and anyone else who sees them. Has anyone else seen them, by the way?”

“Certainly not. They have been in my safe. You are the first person to see them.” Then he added thoughtfully, “But the identity of Jack the Ripper was never discovered, was it?”

“No,” said Carolus. “Not until eighty years too late. You say no one has seen these letters? But one should remember the writer himself and anyone to whom he may have shown them. You notice he says, âI shall not be far away.'”

“Yes. What does that mean? Either he'll be on the ship or he won't.”

“Exactly. But I don't like it, Mr Porteous. If the writer is a schizophrenic and has booked a passageâno, you call it a cruise, don't you?âon June the second, it may well lead to something more serious than a funeral at sea which âmakes a nice change', as you call it.”

“You really think so? You don't think I should cancel the cruise? It would ruin me. It would be the end of Summertime Cruises. And after all, these letters may be nothing but the work of a madman.”

“Oh God,” said Mr Porteous but with no suggestion of a call for divine help. “You make things sound worse than ever. A madman on one of our Summertime Cruises! You can't mean it, surely?”

“All I have said is that the letters you've been receiving closely resemble those sent by Jack the Ripper to the police.”

“That's quite enough. Jack the Ripper! Do you know what it would mean if even a whisper of the name got out among the cruisers?”

“Nothing. They're not idiots, even if they have booked passages. But I agree that it will be best not to discuss the matter at all. I shall spend the intervening month obtaining information.”

Decaying Humanity by Barton, James
Sinners by Collins, Jackie
Last Train to Babylon by Charlee Fam
Bleachy-Haired Honky Bitch: Tales From a Bad Neighborhood by Hollis Gillespie
Different Paths by Judy Clemens
Bride of the Wolf by Susan Krinard
Anticopernicus by Adam Roberts
How to Cook Like a Man by Daniel Duane
The Undead Hordes of Kan-Gul by Jon F. Merz
Jackpot Blood: A Nick Herald Genealogical Mystery by Jimmy Fox