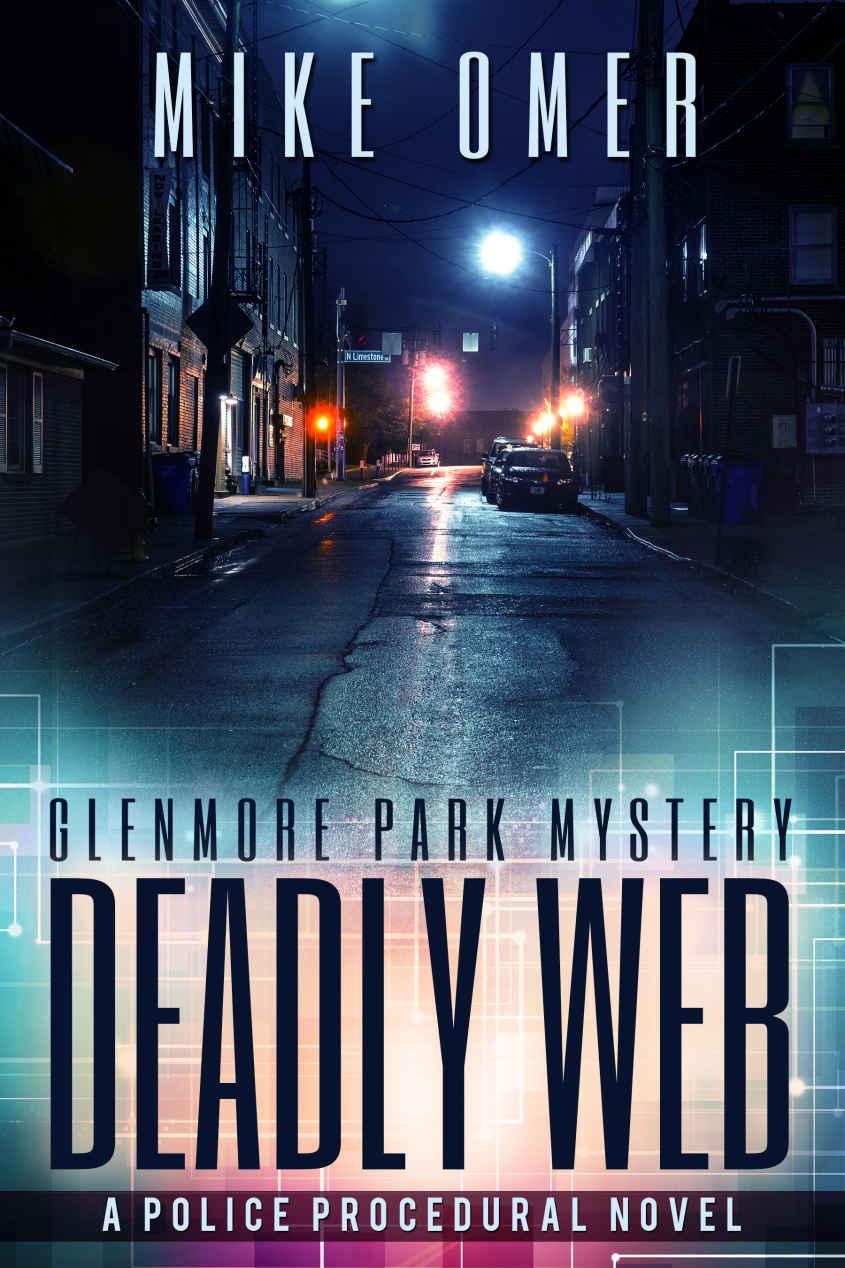 For Gabi, my Angel

If there was one single reason to be a man, it was the ability to pee in a bottle. Not for the first time, Detective Hannah Shor marveled at the fact that it was 2016 and women were still not much closer to peeing in bottles than they had been in the middle ages. Humankind had made amazing progress in the last hundred years. They had invented TVs, microwaves, air conditioners, the internet, dating apps… yet it was still better to be male on a stakeout, because you could urinate whenever you wanted.

She shifted a bit, trying to find a position that didn’t feel as if she were sitting on top of her bladder.

She glanced at Bernard, who was slowly eating another potato chip. Hunched over the steering wheel, staring lazily in front of him Bernard didn’t appear to be in any discomfort. For all she knew, he was happy to sit out here in the cold, eating potato chips, a modern toilet nothing more than a faraway dream. His dark-skinned hand drew another potato chip from the bag. The way he relished them, Hannah wondered how he managed to stay so fit. Fast metabolism, probably. That was what all thin people said when explaining the way they looked. “I can’t help it, I just have fast metabolism.” As if it was a medical condition that ailed them.

She scanned the street again. Not the most inspiring place to be, definitely not after midnight. There was a single streetlight illuminating their surroundings. The buildings were all constructed of cheap red bricks, unpainted, left to wear down and crumble in neglect. Numerous pipes, wires, and rusty emergency stairs decorated the structures, intertwining with each other, creating a maze with no clear entrance or exit. The ground was covered with small puddles and streams, with nowhere to drain to. Dozens of mud-spattered vehicles were parked around the patrol car, some of them looking as if they hadn’t moved for years. The alleyway on the other side of the street was even dirtier, with overflowing garbage cans and empty, greasy food wrappers tossed here and there, slowly flapping in the slight wind.

Someone incredibly clever had walked down the street recently and used his finger to draw a penis on each dirty car window. His art lacked merit, and Hannah was pretty sure she could have done a better job at it.

She was beginning to suspect this was another failure. There would be no crack changing hands here tonight, no arrests to be made, no action to be had. Just full bladders, tension and—

She practically jumped at the sound. How the hell was she supposed to concentrate on this stakeout with that noise constantly invading her thoughts? It was probably the vilest, most annoying sound in the world. At least the way Bernard did it, as if he was making some sort of statement. As if part of the joy of the potato chip was crushing it as loud as you could between your—

“What?” He tensed, looking around, searching the street for whatever had made her call his name.

“Eat another potato chip, and I’ll cram that entire bag up your ass.”

Bernard blinked. “Do you want a potato chip?”

“Okay.” He mulled that over. “They’re really good. They’re Creamy Garlic Caesar. I really like the garlic tinge.”

“I don’t want any potato chips. I just can’t stand the sound you’re making when you eat them.”

“Shut up,” Hannah interrupted him. “There he is.”

They both hushed, looking ahead. A heavy man wearing an overcoat and a knit cap walked down the street, his hands in his pockets. Hannah inspected him carefully, searching for a bulge in his pants or under the coat. Was he armed? It didn’t seem so. He didn’t have the usual stride of a wary, experienced drug dealer, either.

“I don’t know,” Hannah whispered. “He doesn’t look exactly like the man GD described, does he?”

Bernard shrugged. “GD is a moron. It’s a wonder he could describe anything at all, he was so high when we talked to him. What reason would anyone have to walk around in this neighborhood at this time of night?”

The man stopped walking and looked around. Hannah and Bernard didn’t move. Their unmarked Dodge Charger was one of many cars parked by the sidewalk, the interior completely dark. The two detectives were, for all intent and purpose, invisible.

The man entered the alley, leaned against one of the walls, and lit a cigarette.

“There, you see?” Bernard grinned. “We can book him already. Loitering.”

“Don’t be an idiot,” Hannah said. Her heart beat faster. She
needed
this arrest. She constantly felt as if she was on borrowed time, as if Chief Dougherty and Captain Bailey were wondering if she was worth her salary. It had gotten worse after her screwup the month before—she had mistakenly given a reporter confidential intel, exposing the bait they were using to draw out a serial killer. That mistake haunted her constantly, making her doubt her own worth in the squad. Now she was trying to remind herself and her superiors why she’d been promoted to detective in the first place.

“Relax,” Bernard said, calm as always. “We’ll have something real to book him for in a moment.”

“Yeah.” Hannah shifted again. She wished a buyer would get there already. Her existence was slowly becoming one big, incredibly sensitive bladder.

The two detectives stared outside in silence. The man smoked the cigarette slowly, calmly. Hannah suddenly yearned for a cigarette. She’d quit smoking three years before, but she still craved a smoke when she ate a large meal, or had sex, or whenever she was tense. And she was tense as hell. Her desire to pee wasn’t helping. But the hell with peeing. She’d stay there until dawn if it meant—

A movement caught her eye. She touched Bernard’s arm, pointing.

The man approached the alley wearing dirty, torn clothes. His motions were twitchy, his feet not so much pacing as jerking. As he passed by their car, Hannah could see several black marks on his dry lips. Hannah had seen junkies who managed to maintain a perfect lifestyle, working a stable job, having a happy family. Junkies, she knew, came in all shapes and forms. This one came in the form of someone who looked and acted like a junkie.

He approached the man in the alley and said something. The man in the alley nodded. The junkie handed him a crumpled bill he’d been holding in his clenched fist. The other guy took the money, stuck his hand deep into his pocket and pulled out a small, dark object. He fiddled with it for a while, then handed something tiny to the junkie.

“Let’s go,” Hannah whispered. They opened both car doors at the same moment, the latches making small, barely audible clicks—but that was enough. Both the drug dealer and the junkie turned their heads, took one look at the two detectives, and bolted. Bernard pulled his gun, screaming, “Stop! Police!”

They ran in opposite directions—the dealer into the alley, the junkie down the street. Hannah ignored the junkie, focused on the dealer. This was their man. She drew her gun and dashed after him, hearing Bernard shout into his portable radio, reporting the chase.

The street wasn’t wide, and it took Hannah only a second to cross it, but by that time the dealer was already halfway across the dark alley. Hannah’s reflexes took over as she looked ahead, noticing possible dangers. No light in the tight space; an accomplice could be waiting there. The alleyway was narrow, no room to maneuver. Several doors dotted the walls, possible escape routes for the criminal. She didn’t even slow down as she plunged inside, knowing Bernard was backing her up. The high walls closed around her.

The dealer shoved a large trash can backward, and it fell down and rolled, making a loud, echoing noise that reverberated in the narrow space. Hannah jumped over it and landed, almost slipping on a piece of trash. She gained her footing and kept on running. She heard Bernard cursing behind her, had no time to look back. Had he tripped over the can? Hurt himself? Was he simply cursing because their man was getting away? Hannah pushed the thoughts aside as the dealer reached the end of the alley, turned right, and disappeared from sight.

Stupid to let him have the upper hand. They should have planned the ambush better, perhaps had another car waiting at the other end of the alley. But who knew the info they had would actually pan out? GD was not a reliable snitch. He usually gave them half-baked theories, rumors heard in loud bars, and even ideas he cooked in his own fried, mostly-dead brain.

But this time the intel had been good, and now they were losing their man. She reached the end of the alley, turned right, and felt a small wave of relief when she spotted her man running. They hadn’t lost him yet. Even better, he seemed to be getting tired. He was fat, and out of shape. Hannah was gaining fast. Though she was short, she kept fit; she trained almost daily and ran dozens of miles every week. Her feet were a blur on the black pavement, her body hunched forward, her entire focus pinpointed on the perp’s back. She shouted: “Police! Get down on the ground! Now!”

The dealer was breathing hard, stumbling. This would not be a foot chase for the ages. No jumping on the top of a speeding train. No running through a crowded marketplace, knocking down a fruit stall, apples rolling everywhere. Just a short dash, a couple of hundred feet, no more. As she repeated her order to stop, Hannah braced for impact, crashed into him with her right shoulder, knocking him down.

He screamed in surprise and pain, a high-pitched scream, more fitting for a twelve-year-old girl scout than a twenty-something drug dealer.

Hannah trained her pistol on him. “Hands over your head! Now!”

Bernard joined Hannah, his pistol in his hand as well, both of them looking intently at the man as he slowly put his hands over his head. Bernard cuffed him roughly, pulling him to his feet.

Bernard shook his head. It didn’t matter. They had their man. As Bernard patted him down for concealed weapons, he found a small canister in the man’s pocket, and opened it. He poured its contents into his open palm. Fourteen round pellets, their aluminum wrappers shining in the light of the street lamp.

Hannah drew a long breath as she stared at the drug dealer and his merchandise, and realized she still really,
really
needed to pee.

“I’m just sayin’, you didn’t have to be so violent, okay? That’s police brutality, that is. I could sue you! I could—”

“Devin!” Bernard barked, “Shut the hell up, okay? We wouldn’t have had to knock you down if you hadn’t run away. Detective Shor here is usually very delicate when arresting drug dealers.”

“I’m not a drug dealer,” the perp said. He was sitting in the back seat. Unfortunately, the protective screen between him and the detectives in front did not mute all sound from the rear.

Baby Fever (A Real Man Book 3) by Jenika Snow
The Ivy by Kunze, Lauren, Onur, Rina
Names for Nothingness by Georgia Blain
The Siege by Denning, Troy
Breakdown: Season One by Jordon Quattlebaum
Don't Drink the Punch! by P.J. Night
Look at Me by Anita Brookner
Bama Boy by Sheri Cobb South
Transparent by Natalie Whipple
Piece of Cake by Derek Robinson