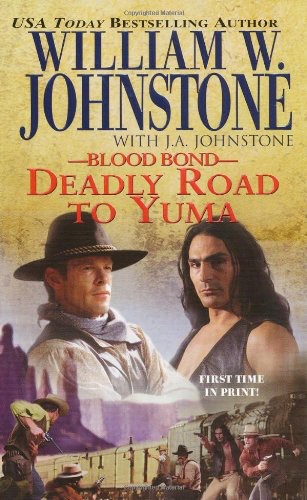 “When are you not?” Sam Two Wolves said.

“No, really, Sam, my whistle could sure use wettin’.”

“We’re stoppin’ up there in that town,” Matt said, interrupting his blood brother.

“Of course we are,” Sam said. He waited a moment, then added, “Do you think we could try to stay out of trouble this time?”

“We always try to stay out of trouble. At least
I
do.”

Sam just rolled his eyes, shook his head, and hitched his horse forward, starting down the long, gentle slope toward the flat where the settlement was located.

They had crossed the border between New Mexico Territory and Arizona Territory not long before, following the San Francisco River as it twisted through this bleak, rugged country. The Gila Mountains loomed to their right, the Peloncillos to the left. The settlement they were approaching was the first one Matt and Sam had come to in several days.

It had been a long, relatively uneventful ride from Sweet Apple, Texas. The blood brothers were in no hurry to get anywhere, because they didn’t have anywhere to be. They were just drifting, seeing what was on the other side of every hill they came to…the same way they had spent most of the past several years.

One of these days, they would settle down and return to the ranches they owned in Montana…one of these days. But until then, they had good crews running those spreads, so Matt and Sam were free to roam. It suited their restless nature to do so.

Best friends and blood brothers since childhood, Matt Bodine and Sam August Webster Two Wolves could have almost passed for real brothers. Both young men were tall and muscular and had ruggedly handsome faces.

Sam’s longish hair was midnight black, a legacy from his Cheyenne father Medicine Horse along with the faint reddish tint to his tanned skin. Matt’s close-cropped hair was a little lighter, dark brown rather than black.

The Cheyenne ritual that had bonded them together made them
onihomihan
—brothers of the wolf. They were brothers of the gun as well, because despite what Matt had said about trying to avoid trouble, it seemed determined to follow them wherever they went.

Luckily for their continued survival, both young men were plenty tough and plenty fast with a gun. In fact, Matt Bodine was known to be as slick on the draw as just about anybody west of the Mississippi, in the same league as famous pistoleros such as Smoke Jensen and Falcon MacCallister. He wore two irons in holsters supported by crossed cartridge belts and was deadly accurate with either hand.

Sam carried only one Colt and was a little slower than Matt…which still made him faster than nine of ten men he ran into. A razor-sharp bowie knife rode in a fringed sheath on his left hip.

There was fringe on his buckskin shirt as well, while Matt wore a faded blue bib-front. A battered old brown Stetson was thumbed back on Matt’s head. Squared up on Sam’s head was a black hat with a flat brim, a slightly rounded crown, and a band studded with conchos.

“What do you reckon this place is called?” Matt asked as they reached the bottom of the slope.

Sam shook his head. “I have no idea. I don’t think we’ve ever been through here before.”

“I couldn’t remember. We’ve been so many places.”

“That’s certainly true. And in most of them, they were glad to see us leave.”

This was ranching country—it wasn’t good for much of anything else—and the settlement appeared to be a typical cow town with a wide, dusty main street that stretched for several blocks. Most of the residences, a mixture of adobe and frame houses, were on the cross streets.

A small, whitewashed church with a steeple sat at the far end of the main street, just beyond a wooden bridge that crossed the San Francisco where it looped around the settlement. At the nearer end was a building that was probably a school. That put this place ahead of some frontier towns that had neither of those harbingers of civilization.

In between were businesses, including a livery stable and blacksmith shop, barbershop and bathhouse, a couple of mercantiles, and half a dozen saloons, another sure sign that this was a cow town. Cowboys had to have plenty of places to blow off steam when they collected their forty-a-month-and-found.

A few wagons were parked in front of the general stores, and a couple of men on horseback moseyed along the street. Pedestrians made their way here and there, including several women in long dresses and sunbonnets. A big yellow dog dozed in the middle of the street.

Sam looked over at him. “How long do you reckon it’ll stay that way?”

“Now, Sam, why do you have to be such a pessimist? Maybe nothin’ bad’ll happen while we’re here. Maybe it’ll be plumb dull the whole time.”

“I went to college, you know.”

Matt grinned. “Yeah, I seem to remember hearin’ somethin’ about that…like every time you try to convince me that I’m wrong and you’re right.”

“It’s just that I study history. And there’s an old saying about how those who fail to learn from history are doomed to repeat it.”

“And what do you mean by that? I’m just a poor, uneducated cowboy, Sam. You’re gonna have to explain things to me.”

“I’m saying that just because someone annoys you, that’s no reason to start a brawl…or a gunfight.”

“You’re sayin’ that I’m touchy. That I lose my temper too easy.”

“If the Stetson fits…”

Sam held up a hand. “Never mind. Let’s just have a drink or two, stock up on supplies, and sleep in real beds for a change.”

“For a redskin, you sure do like what you call your creature comforts. You must’ve got spoiled back there at that university in the East.”

“Yes, well…I’d say something insulting about you being a white man…but I can’t think of anything right now.”

“Just remember what I said about trouble,” Sam grumbled.

He turned his head to nod politely to several ladies who were going into one of the mercantiles, but they didn’t smile or return his nod. In fact, they hustled on into the store as if trying to avoid looking at him.

A man driving a wagon that they met refused to meet their eyes, too, Sam noted. The fellow whipped his team up into a trot instead as he rolled on past them.

A frown creased Sam’s forehead under the broad brim of his hat, but he didn’t mention the odd behavior of the townspeople to Matt, who seemed not to have noticed it.

They reined their horses to a stop in front of a false-fronted building with a gilt-lettered sign on its awning proclaiming it to be the Ten Grand Saloon. More fancy lettering on the big front windows promised cold beer and friendly hostesses.

A stocky, bearded old-timer in bib overalls and a plug hat was sitting in a chair on the saloon porch to the right of the batwings, whittling. He looked up at the newcomers and grunted, “Howdy, boys,” as Matt and Sam swung down from their saddles and looped the reins around the hitch rail. “New in town?”

“Don’t mind in the least. This here is Arrowhead, territory o’ Arizona.”

“Friendly place, is it?” Matt asked.

“Oh, shoot, yeah. We’re friendly as can be around here.”

Sam said, “I noticed that the folks we rode past didn’t seem to want to look at us, like maybe they didn’t like strangers.”

“No, I wouldn’t say that. We get strangers passin’ through here pretty often. Like to think we make ’em welcome.”

Matt gestured toward the windows and said, “If there’s really cold beer and friendly hostesses inside, I reckon I’ll feel welcome, all right.”

“Go on in,” the old-timer urged with a wave of the piece of wood he’d been whittling on.

“What are you carving there?” Sam asked out of idle curiosity as he and Matt started toward the saloon’s entrance.

The old man frowned as he studied the stick in his hand. “I dunno. A snake maybe?”

Matt chuckled as he pushed the batwings aside and stepped into the saloon. Sam was right behind him.

Both of them froze as the batwings flapped closed behind them. Men with shotguns had been concealed on both sides of the entrance, and now those Greeners were pointed at the blood brothers.

“Don’t move, you sons o’ bitches,” one of the men warned. A dozen other men scattered around the room raised revolvers and pointed them at Matt and Sam. The one who had spoken before went on. “You try anything funny and we’ll blow your damn heads off.”

Little Chicago by Adam Rapp
Autumn Wish by Netzel, Stacey Joy
Inside Girl by J. Minter
ARROGANT BRIT (A BRITISH BAD BOY ROMANCE) by Wild, Nikki
Holding Their Own: The Salt War by Joe Nobody
My Forever (Canary Series) by Cl King
Chronicles of the Dragon Pirate by David Talon
The Counterfeit Betrothal by April Kihlstrom
Clayton (Bourbon & Blood Book 2) by Seraphina Donavan
The Cormorant by Chuck Wendig