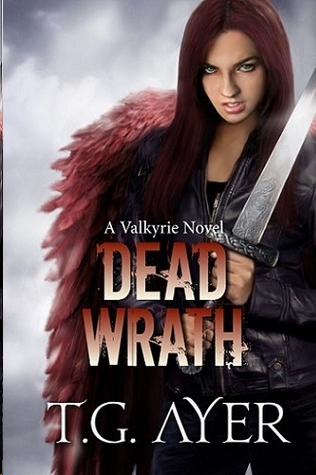 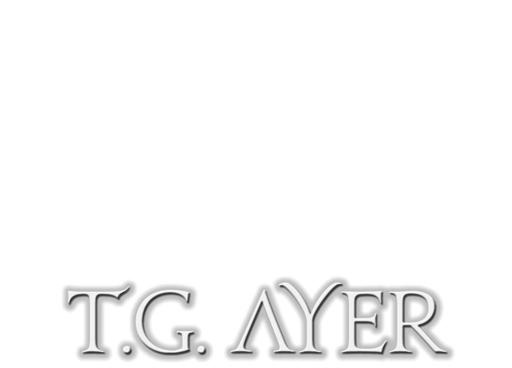 Find out more about T.G. Ayer at

This eBook is licensed for your personal enjoyment only. This eBook may not be re-sold or given away to other people. If you would like to share this book with another person, please purchase an additional copy for each person. If you are reading this book and did not purchase it, or it was not purchased for your use only, then please return to Amazon.com and purchase your own copy. Thank you for respecting the hard work of this author.

This is a work of fiction. Names, places, businesses, characters and incidents either are the product of the author's imagination or are used in a fictitious manner. Any resemblance to actual persons, living or dead, actual events or locales is purely coincidental.

For my dearest friend, Kate Strawbridge. Thank you of always being there for me. For shooting the breeze, for serious critiques and for every other moment of our amazing friendship. You are the bee's knees babe.

But it certainly didn't feel like we were at war. The worn, brown leather of my sandals made little sound on the stone floor of the palace hallway. I went in search of solace and my feet already knew the way.

An Ulfr strode past me, high cheekbones and forehead so distinctive in the race of the wolf shape-shifter. He met my eyes and nodded, a polite, respectful greeting. I gave him a lukewarm smile and kept walking, my feet moving me toward the balcony.

The halls were empty and chilled at this time of morning, when the light of the day gently awakens the land, when the shadows of night depart with slow reluctance. In recent days, I'd found myself seeking as little company as possible.

It was so early that the torches hanging on the walls were still smoldering from the night's light, sending smoky streams trailing along the air, the smell musty and acrid. I pulled my cloak closer and hurried along the hall, praying I'd avoid any further curious gazes.

Hidden by thick, velvet drapes, the balcony was the very same one I'd stood on so long ago, when Thor had told me the lengths I'd need to go to kill the dwarf queen. It seemed a lifetime ago when Aidan's life had been all that mattered and I'd naively thought the god had been exaggerating a little. Only when I'd been faced with the wrath of the evil queen did I truly know that when he said I'd need to bring back her head, he'd really meant it.

A sigh drifted from my lips as I slipped through the parting in the drapes and walked onto the balcony. It overlooked the valley of Asgard, with the lake far to the north, just a sliver of silver gleaming sadly at the edge of the realm. My arms wrapped themselves around my body, as if they could prevent the cold from seeping into my bones. But I knew there was nothing that would take away the ice.

I suppressed another sigh, then figured what the hell and sighed anyway.

In the pale grey light of morning, the green valley, bordered by a snow-covered mountain range, lay blanketed in a light mist. It matched my mood.

The light sheen of moisture lay over the land like a shimmering veil and it felt very much like the veil that seemed to bind my feelings this last week.

Ragnarok was upon us. The events of the end of the world, predicted so long ago, were finally coming to pass. And the warriors of Asgard, Valkyries, einherjar, and Ulfr alike were revving things up. But as much as I tried, I couldn't summon even a hint of anticipation for the final showdown with Loki and his creepy band of Jotunn. Loki, the Trickster, and the bane of my life since I'd entered Asgard. His skill at manipulation seemed unbeatable, and now, after all these centuries, he'd finally risen to challenge his father, Odin.

Rage rose within me, surging through my veins, and although I felt my nails dig into my arms, I did nothing. Felt nothing.

I gave a wry grin.

A feeling kept tapping away at the edge of my consciousness, like a determined woodpecker, bugging me endlessly, incessantly. I recognized it as the other, more stubborn part of my nature. The one I'd heard only as a whisper through the days I'd mourned the death of my closest friend. I knew I had to pull myself out of this funk. Something Sigrun would have said was typical of me and was what made me different.

I snorted. Unique was the last thing I felt. Broken was a way better description. Tears burned my eyes and my heart twisted in my chest. She was always there, a flimsy ethereal ghost walking with me, smiling as she sat beside me, her soft voice echoing in my memory, her grey wings fluttering at her back as she blushed at the mere mention of Fenrir's name. But what hurt more than anything else was something I barely wanted to admit to myself.

She was slowly fading.

And just the thought made my stomach ache, as if it were slowly turning to stone. The memory of her face was gradually disappearing, making me so desperately afraid. What if I forgot what she looked like? What kind of friend did it make me that it took so little time for me to lose the one connection I had left with Sigrun? The best friend I'd ever had. She'd been my guide and my mentor, my friend and my confidante.

And she had died on my watch.

I gritted my teeth. I was supposed to watch over my team, and no matter how much anyone tried to convince me it wasn't my fault, I couldn't see it that way. There must have been something I could have done that I didn't do. Something I'd missed that could have gotten us out of Jotunnheim without killing Sigrun. The land of the frost giants, where we'd gone to save a god, and ended up finding one friend and losing another.

I still heard the whirring of the arrow as it flew through the air. I still felt the stabbing pain in my heart when I heard the thwack as the barb embedded itself into her flesh. And I still felt the hollow emptiness in my soul, an absence of all feeling that resonated within me long after I'd avenged her and killed the frost giant who had taken her from us.

When I'd heard the arrow and turned around, I'd been so sure it would have landed somewhere in the ground in front of me. The last place I expected to see it was inside Sigrun. My hands unlaced themselves and shook as they grabbed onto the thick stone balustrade, my knuckles white and stiff, my knees trembling. I'd had to break off the end of the spear so we could move her to safety, but by then it already been too late.

A bitter laugh escaped my throat, the sound caught on an errant breeze and swept away as if it had never existed.

How much loss was a person supposed to endure?

I'd gotten careless. That was it. Didn't remember that in Jotunnheim a pile of stones could be anything but what it looked like. That pile of stones had taken a Valkyrie's life so quickly.

People say you should look on the bright side, see the positives in your life, but I couldn't see a bright side. Just Odin, stuck in a strange inter-dimensional plane, put there by his Trickster son. And Aidan, once loved and loving, but now distant and unreachable. And Sigrun gone forever. Sure, I could count the positives--Joshua, giving me the love I needed, and Aimee, so steadfast and fierce in her protectiveness, were both still by my side. And not forgetting the fact that the whole of the nine realms now knew who I really was.

If that can be seen as a positive,
I thought wryly.

I wasn't as convinced as everyone else seemed to be. What did a couple of stolen genes matter in the greater scheme of things? I was part of Odin, part of Dr. Halbrook, and part of Irene, a mother who didn't want me. What was I really? Just a mutated, bastardized version of the real warrior Brunhilde. Nothing more.

Drawing my cloak closer, I exhaled, my breath creating a white puffy cloud. A breeze took it, tearing it into smoky strands, then stealing it away. Now a hint of orange bled into the sky. Orange streaked with a blood red. It would not be a good day today. And from the ache in my bones, my body agreed with me.

I left the balcony and the view, deciding it was time to be a little practical.

I had a patient to visit.

I knocked lightly at the door and entered, cracking it open and peering inside. Brody had not been sent to the infirmary at Valhalla in the manner of all the other warriors when healing. He was, of course, a special case considering everything he'd been through.

When I entered, he looked up and smiled, his teeth a white flash against his caramel skin. He still had those chocolate dark eyes and that mop of unruly curls. But that was all that was left of my little foster brother Brody. When I'd known him, he was ten, just a sapling of a kid, skinny and laughing all the time, forever playing tricks on me. I remembered one time when I'd been sitting on Ms. Custer's porch, my nose buried in a book. Something tiny hit me on the neck and I brushed it away. Again and again I kept swatting at nothing until I heard a rustling in the bushes beside the balustrade, followed by a soft giggle.

The last bug that hit me wasn't going down without a fight. It grabbed onto my skin with all its might, but thankfully the prankster's aim was sadly off by an arm's length. As soon as I felt the pinch and saw the insect, I flew off the seat and began frantically dusting my shirt out, pulling the tails from my jeans, and slapping at my bare waist, almost hysterical. And also furious. I remember yelling at him that he was a little brat and that I planned to spank him into next Tuesday, but his cute giggles were what got me.

A Killing Night by Jonathon King
Blood by Lawrence Hill
Fiend by Rachael Orman
The Shattered Vine by Laura Anne Gilman
Wolf Incarnate (Shadows Over the Realm) by Bennet, Tara
Deadly Communications by Lillian Duncan
The Other Side by Lacy M. Johnson
B006K5TA1E EBOK by Collins, Yvonne, Rideout, Sandy
A Lucky Life Interrupted by Tom Brokaw
The Command by David Poyer