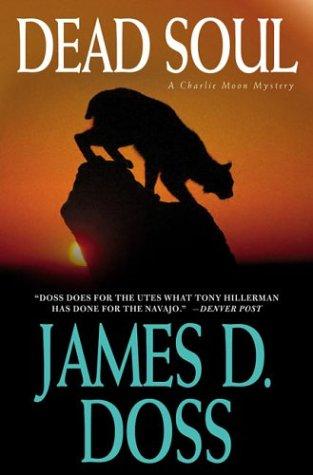 This book is dedicated to the memory of
Thomas J. Boyd Jr.,
soldier, scholar, and gentleman.

THE HEAVENS OVER MIDDLE WORLD ARE OBSCURED BY A MOTTLE
of clouds that grumble and rumble and spit white-hot fire. Midnight’s black sea roars over mountain passes, rushes down deep canyons, washes over bone-dry prairies. Stinging winds shriek and moan, limbs of half-dead trees shudder and snap—nocturnal creatures scurry about in search of sanctuary.

The full-time rancher, part-time tribal investigator is a hard-working man who should be in bed at this late hour. But his soul knows that the Long Sleep will come soon enough. This being so, he delays his slumbers to enjoy the intermittent drumming of heavy thunder, a peppering of cold rain on the porch roof. His happy thoughts are of lush, green pastures where fat cattle graze.

Aside from not having a woman under his roof, Charlie Moon is content with his life. Though he has seen many troubles—and knows that more will come—he does not worry about what the morrow might bring.

NOT SO
far away, under another peaked roof, inside another lonely dwelling, the thunder and lightning is hardly noticed, certainly not appreciated. Something infinitely more sinister than nature’s raucous storm is brewing here.

In a cedar cupboard, sitting on a cracked saucer, a buffy-brown piñon mouse. The nervous little creature nibbles at a salted sunflower seed.

Seated on a three-legged stool, a human biped. Hardened by intense bitterness, haunted by garish nightmares, the deeply troubled spirit is aware of only three realities. Like tectonic layers grinding and buckling beneath a broken world, one sensation slips past another.

Cold muzzle of revolver against temple.

Sinuous curve of trigger under thumb.

Deep breath.
Time to get it done.
Jaw clenches hard enough that enamel cracks on molars.

Bone-weary of burdens too heavy to bear, the failed suicide rests head and arms on a sturdy table. Sighs. Slips away into gray oblivion. For a few heartbeats, experiences something almost like rest. But all too soon, the horrific vision comes. It is always the same.

A sharpened spoon cups under the left eye, severs the optic nerve.

The right orb follows, popped out like a ripe plum.

The pitiful shrieks go on and on and on….

A desperate groan escapes from the mouth of the dreamer.

The wee mouse twitches oversized ears at the startling noise, abandons its meager supper, scurries away with a clicking of tiny feet.

In the rodent’s wake another soul-searing moan. The sleeper awakens, shakes off the remnants of the recurring nightmare. Stares at the revolver.
There must be another way.

There are indeed alternate paths. Some are bright and lovely. Others, dark and paved with crumbled bones.

There is an eternal instant of indecision before…

A choice is made.

Immediately, a hideous notion bubbles up from the depths of that fetid pit where burdensome thoughts settle, take root, blossom into hideous fruit.

PRESSED SNUGLY AGAINST COLORADO
’
S BORDER WITH NEW MEXICO
is the bittersweet land of the Southern Utes. Like the entire universe and every creature in it, this is a work in progress. And a very fine work it is. Splashing, snow-melt rivers follow serpentine paths through broad valleys where willows weep not and lime-green cottonwoods are crowned with shimmering rainbows. Hardy piñon and juniper dot the crests of wind-sculpted mesas. Between these long sandstone benches are dark, silent canyons where spirits who tarry in this world keep company with other shadows.

Presiding above all are the cloud-shrouded peaks, blue-green with spruce and fir. During the frigid Moon of Dead Leaves Falling, the mountain’s round shoulders are sprinkled with flakes of aspen gold. But this is a fleeting time; soon their heads will be capped in purest white that does not vanish until June is well past middle age. The early Spaniards named these heights after that beloved disciple who inquired of
Jesu Cristo:
“Lord, who is it among us that shall betray you?” The answer
San Juan
heard still whispers in the winds. From age to age, the mountains remain…and the betrayal is repeated.

THE RED
-
TAILED
hawk circles high over the creation. Far below, at the yawning mouth of
Cañon del Espiritu
, the bird’s clear eye spies a tiny silver speck. It is the body of an antique house trailer. The dwelling has stout steel ribs, aluminum skin that can be sliced with a pocket knife, small windows where an old woman’s wrinkled face can sometimes be glimpsed. This is where the Ute elder spends the twilight of her life. By the path of the hawk, her home is an almost equal distance from Arboles, Bayfield, and Ignacio—which is to say about ninety-five furlongs. This is a very considerable distance for one who must depend upon others for transportation.

Though she is far from civilization, Daisy Perika dwells close to the heart of God. Considering her many sins, this might seem unlikely—and indeed is beyond all human understanding.

If she is neither sweet nor full of compassion, there are reasons why. The woman’s years have pressed hard, molding her into a leathery bag of brittle bones and bitter memories. Loss and pain have made her greedy and fearful. The elder’s tongue is sharp, sometimes vulgar. Despite her many well-meant promises to the kindly pastor of St. Ignatius Catholic Church, the shaman has not given up her clandestine conversations with the dwarf-spirit who dwells in the badger hole. Daisy might well commit theft or even murder if there was no fear of being caught and punished. The poor old soul is fond of only six of her fellow human beings, and barely able to tolerate the rest. Under these circumstances it cannot be expected that Daisy would keep the First Commandment. One who finds her neighbors hateful cannot truly love God.

But that Lover of Souls adores the crabby old woman. And grants her grace upon grace, not the least of which she deserves.

Therein lies the heart of the deepest, sweetest mystery.

DAISY PERIKA
pushed herself up from the straight-backed chair, hobbled slowly across the linoleum to peer out the miniature window. Hands resting on the sill, she looked toward the U-shaped formation called Cougar’s Tail. Not that she could see the entire curl of the rocky ridge—Daisy could barely make out the mouth of the Canyon of the Spirits. The atmosphere was a stinging swirl of sand and grit that peppered against the trailer like brown sleet.

All night, she had slept fretfully. All morning long, the wind had sputtered and coughed, pausing now and then to gather its raspy breath. With the greater of the gusts, the walls of the trailer rattled and buckled as though the sixty-year-old rivets might pop. Moreover, the entire structure rocked back and forth. And squeaked. And groaned.

There was this singular blessing—the usually solitary woman was not alone. Charlie Moon, who had arrived with the sunrise, was seated at her kitchen table. The tribal investigator had not said a word since finishing his scrambled eggs and chili-spiked posole. His whole attention was focused on a tattered copy of the
Southern Ute Drum
.

The tribal elder turned to scowl at her nephew. As if he was responsible for the weather. “This wind is going to blow us over into Conejos County.”

He grunted, turned a page.

She made a rude, spitting sound. “I can feel the sand between my teeth.”

The old woman pulled a woolen shawl more tightly around stooped shoulders. “It’s cold enough out there to freeze your shadow to the ground.”
And not much better inside.
“I think the furnace is about to give up the ghost—or maybe I’m low on propane.”

“And the cow’s gone dry and the hens won’t lay.” He winked at her over the newspaper. “Other than that, it’s a fine day.”

Daisy tried hard not to smile; the effort made her face ache. “Anybody who thinks this is a fine day has maggot stew for brains.”

He folded the tribal newspaper. “There’s not so much dust up at the Columbine. You should go home with me.”

The tribal elder shook her head. “No-thank-you. Every time I go to your ranch, something bad happens. And if I’m not here, thieves might break into my house.”

Moon glanced around her sparsely furnished home, wondered what anyone would want to steal. Miles from the nearest neighbor, this was no place for an elderly person to live. He repeated the offer he made on almost every visit. “I could fix you up a bedroom at the ranch headquarters.” As an enticement, he added, “It’d be nice and warm.”

“All your bedrooms are on the second floor,” she snapped. “I’m too old and brittle-boned to be climbing up stairs.” She followed his gaze around her kitchen. “Besides, home is where your stuff is.”

“I could fix you up a room downstairs.”

Moon, who had been thinking of his rarely used office, grinned. “No, I need my closets. But there’s a little pantry just off the dining room. It’s got a forty-watt lightbulb. We could clear out some of the canned goods so you could have a shelf for your stuff. It’d be nice and cozy.”

She brushed this joke away with the wave of a hand. “Don’t you have to be getting home?” The sharp-tongued woman immediately regretted these words.

The rancher consulted his wristwatch. “Now that you mention it.” Moon’s eye followed his aged aunt as she made her way across the kitchen. “Anything I can do for you before I go?”

“I can take care of myself.” The shaman placed a palm on the door of the chugging refrigerator, as if she could feel what was inside. “But when you come back, bring me a dozen eggs. Two pounds of bacon. Pound of pork sausage. Can of lard. Sliced bread. Coffee. Milk. Sugar. Butter. And some red chili powder.”

Charlie Moon, who knew her grocery list by heart, got up from the table. He was not able to stretch to his full seven-foot height inside the trailer, and the black Stetson would go on after he stepped outside onto the rickety pine porch. “I may not be back for a week or two. I’ll have some groceries brought over from Ignacio. And I’ll get somebody from La Plata Propane to have a look at your furnace.” He gave her a hug.

THE OLD
woman watched her nephew drive away. Cold coils of loneliness tightened around her heart.
Maybe this time I should have gone with him.