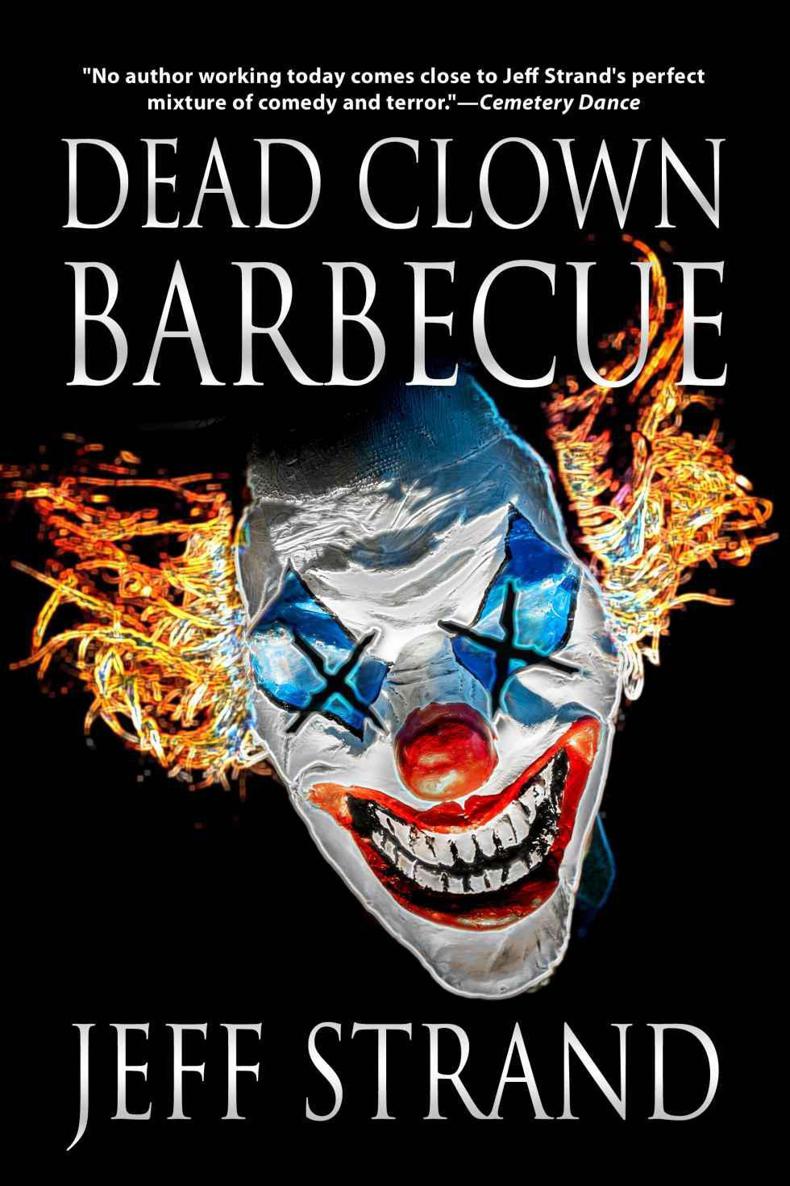 This book is a work of fiction. All characters, events, dialog, and situations in this book are fictitious and any resemblance to real people or events is purely coincidental. All rights reserved. No part of this book may be used or reproduced in any manner without the written permission of the author.

For more information about the author, visit
http://www.JeffStrand.com
.

The Apocalypse Ain't So Bad

Dead in the Water

Other Books by Jeff Strand

If you've read my first one,
Gleefully Macabre Tales,
you've probably got a good idea of what to expect: comedic horror. Mostly. I mean, "Burden" isn't exactly a festival of laughs, and there are some other "serious" stories in here . . . but for the most part, it's comedic horror. And you probably did not purchase a book called
Dead Clown Barbecue
expecting a bleak, introspective examination of the human condition, so we're cool.

"Hey," I said to my wife, "do you want to go to a dead clown barbecue on Saturday?"

"What do you mean? It's a dead clown barbecue."

"But what is that? Is that where they barbecue a dead clown, or is it a barbecue hosted by dead clowns?"

"I thought that 'dead' clown could mean 'zombie' clown."

I chuckled. "Well, sure, that would be logical speculation . . .
in a world where zombies exist
! In our current world, they don't, and if they did, we would have heard about them, and if we hadn't, they certainly wouldn't be revealing their existence at a barbecue on Main Street." I chuckled again, to show her how amused I was by her ridiculous comment.

"Then why did they specify that they were dead clowns? You wouldn't invite somebody to a 'dead cow' or 'dead pig' barbecue."

"I guess you have a mild point there," I admitted. "But I, for one, would have no interest in attending a barbecue where some live clown was being held onto a charcoal grill. That would be sadistic. Can you imagine? Some poor clown shrieking in agony while his leg flesh sizzles? Would
you
want to eat that meat on a burger? Would you? Please say no, or else I will judge you for it."

"No," my wife said. "I'm just saying that, from the invitation, it's not clear exactly what kind of event we're attending, and I don't think you can just assume that we'll be eating choice cuts from freshly killed clowns, that's all."

"So you don't want to go? Is that it? You never want to do anything! If you had your way, we'd never leave the house!"

(Note to readers: I apologize if this uncensored, brutally honest look at our relationship is making you uncomfortable. My goal is to share the truth here, warts and all.)

I nodded my agreement, even though I had no intention of apologizing if they did indeed turn out to be zombies. I mean, come on, that would be a shameful sign of weakness.

On Saturday, I changed into my finest ringmaster uniform. My wife asked if I was really going to wear that, and I grudgingly changed into jeans and a t-shirt instead. We drove to Main Street and arrived promptly at 12:30 PM, because I don't believe in that "fashionably late" crap. There were at least a dozen grills fired up, and the people running them were neither clowns nor zombie clowns. They were just regular people, holding tongs and wearing aprons with amusing slogans.

Besides the grillers, there weren't many other people around. We walked up to the first grill, upon which a clown head (of the "sad clown with stubble" variety) was cooking. It smelled pretty good. Not
amazing
— it wasn't as if my stomach started rumbling — but it was a pleasant enough aroma.

"Hello there, sir," said the chef. "Have you eaten clown before?"

"Oh, well, you'll love these. All of today's stock is drowned clown, the best kind."

The chef nodded. "We drowned them in a tank of salt water. Delicious. Clowns usually die in tragic accidents, like chainsaw juggling, and that trauma affects the meat. The last clown I ate had been trampled by an elephant. I swear, I might as well have just eaten roadkill."

"I'd never even heard of eating clown before," I said.

"Really? Maybe it's more of a West Coast thing."

"Isn't this cannibalism?" my wife asked. I gently elbowed her in the ribs to let her know she was being rude.

"Well, sure, if you want to be technical, it's definitely cannibalism," the chef admitted. "It's not like clowns are another species. That's probably why there isn't much of a crowd here today. People get kind of squeamish about eating human flesh, even when it's cooked to perfection. I kept telling the organizers of this event that we didn't need twelve grills running, but they figured it's better to have too much than to run out."

"You can always donate the leftovers to a homeless shelter," I said.

"Not my department. They'll probably just chuck it in the trash. Anyway, would you like to try some crispy clown ear?"

The chef sliced off the clown's left ear. "Careful, it's hot," he said, picking it up with his tongs and handing it to me. I bit it in half and chewed thoughtfully. He'd lied; it was more rubbery than crispy, and much less flavorful than I would have hoped.

"Oh, yes, yes." I ate the rest of the ear to be polite. "Very good. Perfectly seasoned."

"Would you like some clown sausage? I'll be honest; there's some chicken and pork mixed in there, but the majority is clown."

She pointed to the grill next to ours. "That's Lester Berkman!"

I looked at the clown head. The sideburns, the skull earrings, the eyepatch — it was definitely Lester.

"He's not a clown!" my wife shrieked. "He's been our neighbor for the past fifteen years!"

"Just calm down," I said, putting my arm around her.

"Don't you see? These aren't clowns!
They're putting regular people in clown makeup and then grilling them
!"

All twelve of the chefs turned to face us at once, except for our chef, who'd already been facing us.

My wife and I ran back to the car, chased by a dozen tong-wielding chefs. We were lucky to escape with our lives. My wife kept insisting that we needed to call the police, and I agreed that she was right, but I also explained that if we kept quiet about it, I could break the story in my latest book, which would drum up some publicity.

"Innocent people are being eaten!" she said. "How could you think about book sales at a time like this?"

I glared at her. "Those book sales are what pay for your fuzzy slippers collection. And I'd watch my mouth if I were you, because I think we've got some white makeup in the bathroom."

Yeah, it was a dick thing to say. I'm sorry. But she agreed, and so it feels good to be able to share the horrific truth about the Dead Clown Barbecue. Representatives of the Federal Bureau of Investigation, please take immediate action. Thank you.

A book like this is not the work of one person. Sure, it's 99.7% or so the work of one person, but that last .3% is what stops me from looking like a total idiot, so mega-thanks must go to my trusty crew of test readers: Tod Clark, Michael McBride, Jim Morey, and Rhonda Wilson. Any errors in the book are probably things that they pointed out but that I was too arrogant to change. Also thanks to editor/publisher Chris Morey, and, of course, my wife. I love you, sweetie, and I was totally bluffing about the makeup.

I didn't even like the cat I had in the bag. Don't get me wrong, I liked cats in general, but this particular one was a scratchy, bitey jerk. Also, Tipsy was twenty-two years old, a more than respectable age for a cat to leave this world, so I couldn't feel
too
upset about his passing.

But my wife wanted her cat back, so here I was at the Pet Cemetery. Again. In the middle of the night. With snow on the ground. Hoping I wouldn't get arrested.

My breath, misting in the air, seemed to form the words
You're an idiot
before fading away.

I found a decent spot and cleared away the snow. Then I began the not-fun process of digging a hole in the frozen ground. A better man than me would not have spent the whole time muttering that my wife should be the one out here doing this, but I muttered away without shame.

Fortunately, the hole didn't have to be very deep — just enough that you could completely cover your pet with dirt. After I got a few shovelfuls of dirt out, I gently placed Tipsy into the grave, and then filled it back in.

As I walked back inside my nice warm house, Abigail gave me a big hug. "How did it go?" she asked.

I shrugged. "He's in the ground. I guess now all we can do is wait. Are the kids still up?"

"I just tucked them into bed."

I took off my boots and jacket and went upstairs. Five-year-old Reed's eyes were closed, but Becky, my eight-year-old, quickly shut off her Kindle and hid it under her pillow.

"I didn't see anything," I told her. I knelt down and gave her a kiss on the cheek. "Goodnight, sweetheart."

I glanced over at the aquarium. Charlie was lightly smacking his shell against the glass,
tap, tap, tap
.

"That's what zombie hermit crabs do," I told her. "You knew that when we brought him back."

In the aquarium next to Charlie's, six goldfish bobbed on the surface of the water. They'd occasionally swim down until they hit the colored gravel, but mostly they just floated. Reed thought they were way cooler than completely live fish.

I retrieved a towel from the bathroom closet and draped it over the side of the aquarium. Charlie smacked his shell silently against the cloth.