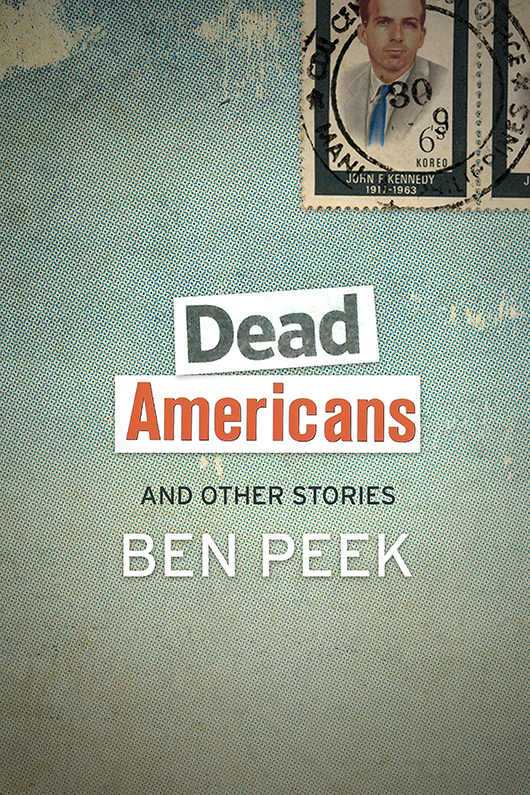 “Ben Peek is a writer I fully expect to blunder out into the scene like a runaway brontosaurus one of these days. He has titanic talent generally leashed to micro-detail projects when his true canvas is probably something much wider and deeper.
Twenty-Six Lies/One Truth
is a gently experimental text that uses a glossary of terms from A to Z to create vignettes, one-liners, and other supports for loosely connected narratives. Some are funny, some are most definitely not funny. All are lively and deserve your attention.”

“I emerged from the book feeling somewhat dazed and exhausted (having read it from beginning to end within a twenty-four-hour period), and I’m not entirely sure what I feel about it. Impressed, certainly. Curious, definitely. A little pissed off . . . well, maybe.”

“What I got from it is this: that truth matters when it matters, and doesn’t when it doesn’t. And that each of us must find our own path as to where that distinction lies.
Twenty-Six Lies/One Truth
is an intelligent, playful, funny, challenging, thoughtful and deeply moving work. It is a book filled with outrageous lies. And it is a book filled with truth.”

“It ought to fail miserably. But, curse his eyes, Mr. Peek has written a fantastic book. And despite its structure,
Twenty-Six Lies/One Truth
has a powerful narrative drive. Mr. Peek has deftly woven a story into his encyclopedia, complete with character development, unfolding themes, and a hard shock of an ending.”

—Clare Dudman, author of
One Day the Ice Will Reveal Its Dead
and
98 Reasons for Being

“Ben Peek’s
Twenty-Six Lies/One Truth
is a memoir in the form of alphabetical entries, ten or so entries for each letter. The book is also semiotic, social commentary, a meditation on the truth-telling responsibilities of a writer, a part-time comic book, funny as hell, profane, and melancholy. Like the best memoirs it’s deeply personal yet engaging and universal. Peek lays out the truths and lies and is smart enough to trust the reader to fit everything together. Powerful stuff. Highly recommended.”

—Paul G. Tremblay, author of
In the Mean Time
and
Swallowing a Donkey’s Eye

“This is a clever, moving, funny and insightful book. I laughed, and I would have cried, but I’m too fucking hard for that sort of shit. See, I understand, relate and empathize with a lot of the truth in this book, the truths I know are true.”

—Paul Haines, author of
Doorways for the Dispossessed

“Recently I read Ben Peek’s
Twenty Six Lies/One Truth
. Yes, it’s full of bluff and bluster, Peek coming across as a hard-ass, and yes, it’s very fucking good. There are moments, in fact, of brilliance.”

“Ben Peek’s
Twenty-Six Lies/One Truth
is inebriating, an absinthe of self-deception, a smoke-filled room of conflicted emotion, a hall of mirrors, each of them distorting both perception and reality. Ben Peek dances on the stepping stones of Ben Peek’s supposed life, leaping from philosophy to pop culture, from insight to angst. As one reads this remarkable work, the question arises, ‘What is the line between the art and the artist’? Peek knows. I know. But you cannot know, for certain, until you pick out the lies. Do you trust your judgement that much? Do you trust Ben Peek? What makes you so certain that you can crack the code of
Twenty-Six Lies/One Truth
? I’d be careful if I were you. Deception awaits.”

“With the gravitas of a Margaret Atwood or Kazuo Ishiguro, Peek, in his debut novel,
Black Sheep
, crafts a quietly horrifying world displaced from ours by a century of time and an implosion of globalist attitudes.”

“There’s a clear critique operating here of contemporary Australian society, with its expectation that newcomers leave their cultural background at the door on entry. . . .
Black Sheep
is one of the more interesting novels I’ve read in recent times.”

“This is an angry young book . . . it blazes across the page with absolute intensity. It’s also one of the most interesting and politically challenging science fiction novels to come out of Australia in a very long time. It’s a novel that has something to say.”

“Continues to press the nerd pleasure centers of my brain.”

“Cleverly and at times beautifully written.

—Not If You Were the Last Short Story on Earth

—The Writer and the Critic

“The stories concern diplomatic visits between the cities, and the terrible misunderstandings between the two, exacerbated by the ill-treatment of the ground people by the cities above, and in particular by the illnesses that doom those below to early deaths. . . . [I]nteresting, with affecting main characters.”

“
Above/Below
is an admirable, entertaining and successful work that adds up to more than the sum of its parts. Its authors, Ben Peek and Stephanie Campisi, have done more than produce excellent novellas in their own right (although they have done that, too)—they have produced an elegant composite novel which can, as I think I have shown, be read in any order.”

“It’s not everyday, after all, that we come across a book like
The Griffin and Sabine Trilogy
or
City of Saints and Madmen: The Book of Ambergris
in which the medium or the storytelling technique changes everything.
Above/Below
is one such book and I say that not just because of the format but due to the quality of the writing as well. While short and immediate, one could spend a long time analyzing the book, poring over the details, debating the politics of the setting, and analyzing the nuances of Campisi and Peek’s technique. They’re compelling novelettes in their own right but together, a must-read novel for any reader—genre or otherwise—and is easily one of my favorites for 2011.”

The Souls of Dead Soldiers are for Blackbirds, Not Little Boys

Under the Red Sun

Parramatta road runs west from central Sydney, out into a vast urban and suburban sprawl. It’s a liminal space, between the city and the bush. Roads climb and fall over the small hills, they wind through the districts with their little shopping centres and vast malls. Freeways bypass the area altogether, as if some of us weren’t meant to venture there. In one of these little dense knots of population lives Ben Peek, a man accustomed to the liminal zones.

Peek is a large man with a quiet voice. He rarely drinks, has excellent taste in both music and literature. Over the years, he’s made both friends and enemies. This is in part because of his forthright opinions, many of which can be seen on his well-read blog. Peek is not one to compromise and that’s to some people’s taste but not to others. Intransigency is not an admired trait in so-called civilized society, though it is one we are sorely lacking. To begin with, Peek has been openly critical of awards, for he sees them as contingent affairs that don’t represent much at all.

For over ten years, Ben Peek has been quietly writing his dark and intense fiction. For over ten years, he has been making himself into one of Australia’s pre-eminent writers. For over ten years, he has been under-read and underappreciated. His early dystopian novel,
Black Sheep
, examined an Australia where ‘multiculturalism’ was a crime. Despite laudatory reviews, the book was lost in small-press isolation and quickly disappeared. His brilliant postmodern novella,
Twenty-six Lies/One Truth,
told a story in fragments, each piece headed by a letter of the alphabet. It was a literary triumph that made small waves among a select readership. Peek’s equally ambitious book
A Year in the City—
a section of which is printed here as “The Dreaming City”—rewrote the geography of Sydney through the eyes of Mark Twain and aboriginal myth. Like his lucent Red Sun book—showcased here in the exciting “Under the Red Sun”—it is yet to find a home. All this is about to change, as Peek has sold a major fantasy series and soon his work will be sought out. Some of this early work will yet see print.

From this short précis you might gather Peek is a genre writer but, like the suburb he inhabits, he stands on the borderlands of the literary. In a sense he is the archetypal speculative fiction writer. He likes to experiment with form and he has read widely outside genre. In this collection of stories you will find—in “Johnny Cash” and others—the influence of “literary” writers such as Murikami, Peter Carey, or science fiction’s great experimentalist, J. G. Ballard. Peek’s love with headings and sub-titles implies a meta-narrative distancing, a self-conscious eye overlooking the very stories they are a part of.

Take the opening story of this collection, “There is Something So Quiet and Empty Inside of You That It Must Be Precious.” Each subtitle resonates with the story adding the self-referential depth. The story takes the form of a police procedural, resonating with Chandler and Ellroy, and yet subtly shifts into the kind of magic-realism you might find in Peter Carey. The true centre of the story, however, lies in the character of Williams, a drawn-out forty-year-old. His world-weariness is so finely crafted that we can practically feel the weight in his bones as he moves around.

Which brings us to the question of voice—an area of writing difficult to analyse, hard to teach, yet crucial to the success of any writer. Peek found his voice early: distanced and ironic, and yet in some contradictory way still powerful and intense. If the distance and irony come from the self-reflexiveness, the muscular intensity comes in the prose itself, the attention to detail, the inner life of the characters.

In his stories, Peek likes to refer, however tangentially, to cultural icons: John Wayne, Lee Harvey Oswald, Johnny Cash, Octavia Butler. It’s a manoeuver that appeals to the wider world beyond the text, with all its meanings, and so adds to the self-reflexivity, the ironic distancing.

In Butler’s case, the reference is to science fiction’s greatest female African-American writer, and highlights Peek’s ongoing concern with race and multiculturalism. Each of his novels in some way meditates on this concern, in Peek’s distinctive way. Peek is an iconoclastic progressive, belonging to no discernable political tradition, but rather having fashioned a political outlook of his own making.

A collection of Ben Peek stories is long overdue. For over ten years, he has stood at the forefront of a new wave of Australian short story writers. In this book, you’ll find his best short work, though certainly there will be more to come. It will take you away from your everyday life and throw you into unknown, dark worlds. Peek will impress you with his technique. He will make you think about life and death, race and gender, hope and despair. With the recent sale of his fantasy books, he is no longer the proverbial “writer to watch.” He no longer needs to show what he can do. He has done it. He has been doing it for more than a decade. Here is a selection of the fruits of that laboor. Prepare yourself.

—Rjurik Davidson is a freelance writer and Associate Editor of
Overland
magazine. Rjurik has written short stories, essays, reviews, and screenplays. His collection,
The Library of Forgotten Books
, was published in 2010, and his novel,
Unwrapped Sky
, will be published in 2014.