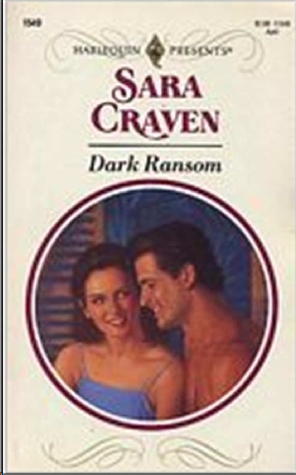 She was living on the edge of torment

Charlie Graham had come thousands of miles across the world--the

Amazon promised excitement, adventure and new hope for her

bedraggled soul. But she hadn't counted on being kidnapped by one

hostage in his jungle castle!

Of course, the kidnapping was a misunderstanding, and nobody

could have predicted the torrential rains that flooded the river,

stranding everybody. But that hadn't stopped the black sheep of the

Santana family from sweeping Charlie away. He'd taken her body

and devastated her mind and her senses. And then he demanded she

She went on staring down into the brown waters of the river, hoping

against hope that the tentative remark might have been addressed to

wasn't possible. Because there was only one other European on the

I've come thousands of miles across the world, she thought, for

some peace and quiet. To get away from appeals like that. Yet

'Excuse me,' the voice insisted, and Charlie turned unsmilingly.

'I was wondering...' The other girl beamed ingratiatingly at her as

she fished into her shoulder-bag and produced an envelope. 'Could

you deliver this for me to the hotel in Mariasanta?'

On the surface it seemed a harmless enough request, but Charlie's

interest was aroused just the same, especially as the newcomer,

whose name she knew from the scrappy passenger list was Fay

Preston, had stayed aloof, barely addressing one remark to her until

She said, 'Why don't you deliver it yourself? We'll be arriving in

Mariasanta the day after tomorrow.'

'I'm not going that far,' the girl said shortly. 'I'm getting off at the

fuel stop, and catching the next boat back to Manaus.' She

shuddered dramatically. 'I've had Brazil and the mighty Amazon

river right up to here.' She gestured, giving an awkward little laugh.

'Why, yes,' Charlie admitted levelly. 'As a matter of fact, I'm

occupying some of it.'

Fay Preston tossed her head. 'Well, so am I, but that doesn't mean I

have to like it. This whole trip's been a disaster from day one. I just

didn't think it would
be
like this—so primitive and awful. I'm

getting out now, while I can.'

Charlie looked at her with faint amusement. She had to admit that

the other girl looked completely out of place on the unsophisticated

Manoela.
She exuded the high gloss that only money could buy,

from her extravagant mane of streaked hair to her designer clothes

and elegant sandals. Charlie had wondered more than once why Fay

Preston had been attracted to such a holiday in the first place, when

enough for Fay, not to mention the curtained-off hole in the deck

which served as a toilet, and the uninterrupted diet of rice and black

beans, eked out by fish and occasional pork if they tied up at an

She said lightly, 'That sounds serious. Have you had secret

information that
Manoela'
s about to sink?'

it badly.' She smiled nervously. 'I mean—I just don't want to go any

further up-river, otherwise
I
might miss the return trip.' She proffered

Charlie took it, making little effort to conceal her reluctance. She

was being mean, she supposed, but she was fed up with doing

favours for people. Of hearing them say confidently, 'Oh, Charlie

will do it'—no matter how much inconvenience might be involved.

she'd once heard her sister Sonia say with a giggle, and it still hurt.

She would be going ashore at Mariasanta, so she wasn't really going

to be put out at all, yet at the same time she was aware of an

She glanced briefly at the superscription on the envelope before

tucking it into her own bag.
'Senhor R. da Santana'
it said in a

childishly rounded script. No address—not even that of the hotel,

although she supposed it was doubtful whether Mariasanta would

boast more than one.

Fay's smile was anxious. 'I'd arranged to meet friends,' she said. 'I

Curiouser and curiouser, Charlie thought, especially as these

'friends' appeared to be male and in the singular. But what the hell?

she called herself to order. It was really none of her business.

She said drily, 'So—I just leave this at the hotel for collection?'

The other nodded eagerly. 'If you wouldn't mind. I can't thank you

'It's all right,' Charlie returned with more civility than truth, and Fay

flashed her another brittle smile before walking off, her heels

wobbling on the uneven deck, leaving Charlie to return to her

fascinated scrutiny of the passing scenery.

some vast ocean, but now it had narrowed, closed in on the

Manoela,
the high green forest which bordered it seeming almost

accessible—as if she could stretch out her arm and touch it.

Reminding her of one of the reasons behind this journey. One which

she'd barely acknowledged, even to herself, before throwing off the

shackles and restraints of home.

She sighed, remembering the furore when she'd announced her

intention of taking a holiday in the Brazilian interior.

'You surely aren't serious.' Her mother's face had been totally

outraged. 'What on earth will you do—miles from civilisation like

Be on my own for once, Charlie had thought fiercely. Enjoy a few

But she hadn't said so aloud. Like so many selfish and demanding

people, her mother had feelings all too easily wounded, and any

and pointed remarks. She'd learned to her cost and long ago that it

simply wasn't worth it.

Instead she'd said quietly, 'It's always been an ambition of mine.'

What curious ambitions you do have,' Sonia had drawled,
putting

down her coffee-cup. 'One minute you're skivvying for a pack of

ungrateful old biddies. The next you're vanishing up the Amazon.

What will the local geriatric brigade do without you?'

'Oh, don't even talk about it,' Mrs Graham said pettishly. 'It's enough

disgrace having a daughter in domestic service, without allowing it

to become a topic of conversation in my own sitting-room.'

'I'm a home help,' Charlie said patiently. 'And I happen to like my

Sonia gave a silvery laugh. 'Well, you have every reason to adore

the late Mrs Hughes, leaving you that weird legacy to be spent on

foreign travel. Although I bet she didn't have the Amazon in mind.

She probably expected you'd do a guided educational tour round the

European capitals and meet some suitable man.' She gave her sister's

slight figure a disparaging look. 'But then, of course, she didn't

really know you very well, did she?'

'Perhaps not,' Charlie agreed colourlessly. She wondered if by

'suitable' Sonia was thinking of someone like her own husband. In

and sleek on the surface, but already running to fat in his designer

suits like an over-stuffed sofa. But as Sonia and their mother were

totally complacent about the marriage, Charlie kept her opinions

'So, cleaning all that silver and listening to her endless ramblings

paid dividends in the end.' Sonia lit a cigarette. 'Really quite clever

Charlie boiled inwardly, and silently. It hadn't been clever at all.

Mrs Hughes had seemed to enjoy her visits, and they'd struck up

quite a friendship in the relatively short time available, but that was

all there was to it. Charlie had been genuinely grieved when Mrs

Hughes had succumbed to a final heart attack, and the subsequent

Apart from anything else, Mrs Hughes had lived very modestly.

'To my dear young friend Charlotte Graham, so that she may spread

her wings abroad at last,' the codicil had stated.

'I can't accept it,' Charlie had said at first, and the solicitor, Mr

'You won't be depriving some deserving relative, my dear young

lady. Far from it,' he commented with a certain dryness. 'The rest of

the estate goes to Mrs Hughes's nephew Philip, and he,

unfortunately, has not been in contact with his aunt for several

years. In fact, it isn't certain where he is, or even if he's still alive.'

He sighed. 'Rather a self-willed, adventurous young man, I

'Mrs Hughes thought he was still alive,' Charlie said. 'She was

convinced of it. She talked about him a lot—said he'd gone to South

America to prospect for gold, swearing he'd come back a

Mr Beckwith tutted. 'A very risky undertaking, and a great grief to

his aunt. We shall advertise, of course, but he could be anywhere.

In the days that had followed Charlie had found herself thinking

more and more about the missing Philip Hughes.

'We quarrelled,' Mrs Hughes had told her sadly. 'I wanted him to

and he wanted to see the world. Neither of us was prepared to

compromise.' She sighed. 'I, at least, know better now. He wrote a

few times from Paraguay, and then from Brazil, but for the last two

staring self-consciously at the camera, an arm draped across his

aunt's shoulders. There was nothing in his conventional good looks

to suggest that underneath there was a wild adventurer yearning for

But then, no one would think that of me either, Charlie thought with

a faint grin. Especially when I'm still living at home at twenty-two.

sitter, but each time her mother had reacted with tears and hysterical

outbursts about neglect and ingratitude.

Charlie had always hated scenes, and raised, angry voices made her

feel physically sick. But some inner voice told her she had to

weather the storm about her holiday, or she would never have any