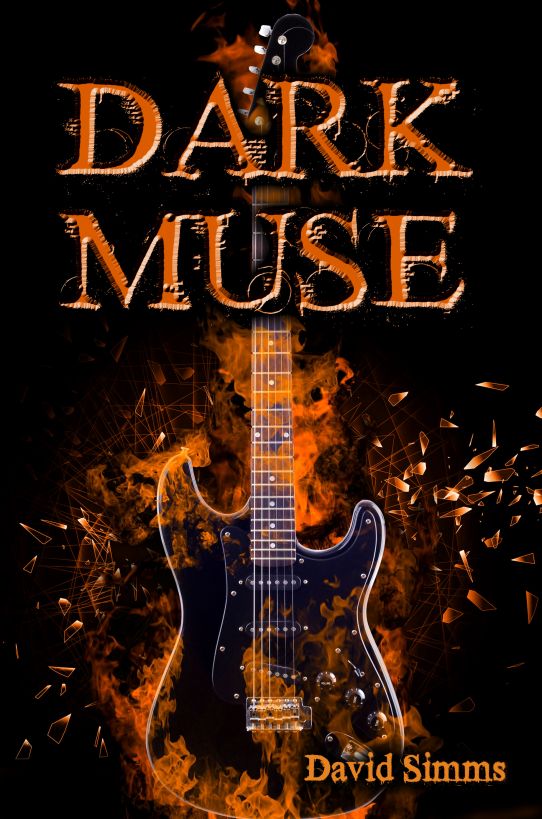 Dark Muse
A Tale from the Crossroads
by David Simms

Names, characters, and incidents depicted in this
book are products of the author’s imagination or are used
fictitiously. Any resemblance to actual events, locales,
organizations, or persons, living or dead, is entirely coincidental
and beyond the intent of the author or the publisher. No part of
this book may be reproduced or transmitted in any form or by any
means, electronic or mechanical, including photocopying, recording,
or by any information storage and retrieval system, without
permission in writing from the publisher.

"Do you believe music has power?
Dark
Muse
answers that question with an ear-shattering scream that
will plunge you into terrifying worlds unknown. Hang on!'

"Dave Simms has written an engaging entry in
the young adult market; he knows his music and his audience—or any
audience! I was quickly seduced into reading page after page,
loving the characters and the story. A must-read and a keeper."

Dreams do come true but most of the time,
they need plenty of hard work and with that, a lot of fine people
to bring that abstract wish into a reality. Dark Muse has been a
long time in the making. Without an exceptional editor, someone
with a keen eye for details, most writers can never see their flaws
with their own two eyes. Denise Meinstad took a chance on a first
novel and worked magic. Others should be so lucky to be paired up
with someone so passionate about the craft of storytelling along
with a pure love of books. Thank you for helping to chisel
something to be proud of from a raw block of imagination.

Back in 2006, my first writing mentor and
friend, Deborah Leblanc, snuck me into a band of authors to perform
at the first Thrillerfest in Phoenix. After sharing the stage with
some of the biggest writers in the country, I found myself in a new
world. David Morrell, John Lescroart, Michael Palmer, Blake Crouch,
Scott Nicholson and Bob Levinson taught me plenty about
perseverance and how music and writing are intertwined. When the
Killer Thriller Band morphed into the Slushpile, I found myself
with true friends who pushed me in many ways towards the
realization of my dream. Thanks to Alexandra Sokoloff, Harley Jane
Kozak and Elle Lothlorien, but especially to two people who have
changed my life, both professionally and personally, as we played
across the country and beyond, Heather Graham and F. Paul
Wilson.

The bands featured in this novel have fueled
a fire in me which inspired the story and many others will find
themselves in the sequels. Life without music is not life to
me.

This book would not have been possible
without the inspiration of my students, the many I have been graced
with and learned from over the years. You have shown me what true
magic is by overcoming odds which would cause many others to quit.
The band in Dark Muse is based on many of those who have taught me
about enjoying what I do have instead of lamenting what I lack.

Finally, to my parents for always encouraging
me to explore new worlds in playing guitar and saxophone, writing
and reading anything that had words on it.

Yet this achievement would mean little if I
couldn't share it with my wife, Trudi, and brand new son,
Sawyer.

For my parents, who have always kept my muse
burnin

Edgar “Muddy” Rivers lay flush to the edge of
the hill overlooking the train tracks, the wasteland of garbage and
the two narrow roads that met right in the middle of it all—the
crossroads that predated the town of Carter Hills, New Jersey.

He dug his fingers into the dirt and weeds to
keep himself from shouting to his brother, Zack, who stood dead
center in the crossroads, illuminated by moonbeams piercing the
clouds on a starless night. The teen was caught up in a frenzy,
entranced by the music he was playing. The eighteen-year-old stood
his ground, tall and lean, muscles taut beneath his Led Zeppelin
T-shirt, a stark contrast to Muddy, who was almost three years
younger, four inches shorter and rail thin.

Beneath his brother’s caressing fingers, his
Les Paul guitar screamed and howled. He played notes that whined,
cried and pleaded for resolution. Yet his brother kept pushing.

What was he doing? Muddy opened his mouth to
scream for Zack to stop, yet no voice sounded.

As Zack lost himself in his music, thunder
boomed and lightning illuminated the smile on his face. No rain
followed, but the air pressed down on them like a soaked woolen
blanket. Each shaky breath Muddy took felt as if both lungs were
drowning. Something sinister added to the weight of the air. He
wished to shake his brother free from the hold the music had on
him, but found himself fixed to the ground.

The earth beneath the teen began to tremble
with the next smash of thunder. Zack kept playing, fingers dancing
in mad passion along the frets, completely oblivious to what was
happening around him. He was fading into the night, dissolving into
the darkest song he had ever heard.

Muddy didn’t want to be there. He wanted to
be home in bed, tucked in nice and warm, but earlier that night,
he’d followed his brother Zack out of their house, guitar in hand.
By the time he’d reached the top of the hill and spied Zack below
at the desolate crossroads, he was doused in sweat. Zack simply
started playing his guitar. He carried with him a tiny, portable
amplifier powered by batteries. Jacked up to ten, the amp sounded
much louder on this crazy night.

In the shattered moonlight, Muddy saw dark
streaks of blood from the slices in his brother’s fingers. They ran
the tightropes of the strings down to the pickups where his right
hand strummed and plucked, and twisted out violent cries of
emotion.

A crescendo ended in a smash of thunder. An
explosion of light began another flurry of notes and screaming
bends. Zack fed off the storm, and maybe, just maybe, the storm was
feeding off him.

Then the ground shook so much Muddy nearly
slipped over the edge, tumbling down the hill. Muddy’s fear of this
bad section of town gave way to another, more pressing fear.

Zack’s face broke into an even bigger
expression of joy, yet tears streamed down his cheeks. The
crossroads shimmered in the moonlight under his sneakers. Still, he
played like his life depended on it. Like the music
was
his
life.

Just before
it
happened, Muddy sensed
a feeling of foreboding, like something bad was about to break
through. Not from the ground. Not from the sky either. From
somewhere else, somewhere he doubted either of them had ever
imagined.

Finally, the night opened, like those thick
velvet curtains hung in vintage theaters. It sucked Zack’s music
into whatever lay behind it.

Muddy managed to stand on wobbly legs and was
about to run down the hill to stop him, save him, but something
obstructed him before he could start and he fell to the ground.

The curtains wrapped around his brother in an
otherworldly embrace, taking the older boy and his music away.

When the moonlight returned moments later,
the crossroads stood deserted.

School dragged by on Monday as though time
insisted on becoming Muddy’s newest enemy. From the moment he
stepped through the yawning jaws of Roosevelt High, minutes turned
to molasses through an hourglass. He knew he wouldn’t get a chance
during the day to speak to his band, “The Accidentals”, about his
brother’s strange disappearance. The story would have to hold until
practice. His anxiety boiled, his arms clenched tight to his sides
as he walked the hallways. Of all the days that he needed things to
glide by, the elements of fate threw him a curveball whenever he
turned around. Right as he headed to lunch, they smacked him right
in the forehead with a doozy.

Great. The town’s biggest dealer is talking
to me.

The moment froze as he turned to face the
six-foot-two, ghost-like bully and his buddies. Muddy didn’t take
drugs and this guy knew it, but ever since their mother died, Zack
sometimes did. His brother swore the stuff helped him “connect,”
just as Jimi Hendrix did, as some of the other greats supposedly
did. Muddy knew that Zack ached for a realm most musicians only
dreamt of, the feeling when melody, instrument and soul became one,
when the barrier broke between worlds, dimensions and anything else
life threw in your way. All musicians shot for it. Muddy had been
close to the “zone” several times, but had only danced on its
edges, had never plunged into its all-encompassing embrace.

But, then he wasn’t his brother. He wasn’t
the rock-god-in-waiting.

“Yo,” the slime said, this time even less
friendly, if that was possible.

Ice frosted his spine as he turned to face
the older boy. Vince looked like an evil imp with sharp cheekbones
and a pointy chin.

The dealer’s smile broke wide open. At the
same time, he nudged his buddies, the guys who actually sold the
drugs in school so nothing could be traced back to him. Vince was a
senior, probably headed to a good college the following year, but
still a terror to anyone he disliked. He had the makings of a
lawyer, Muddy often thought.

“You do know he has business with me,
right?”

Muddy didn’t and wished he could punch his
brother right then and there.

“He blew me off last night,” Vince said.

If you only knew.

Vince tried to angle him into the locker but
the bell rang, saving his butt for another period or two.

“Tell him to watch out if he tries that
again.”

“Yo, man,” Otis called, twirling a drum stick
in one hand and folding a slice of pizza in the other. “You look
like you spent a week in Metallica’s bass drum.” Muddy’s best buddy
stood a good five-foot even and didn’t care one bit.

One by one, the band members filed into the
music room to eat their lunch together, the one place where they
felt completely at home outside of the stage.

“Yeah,” Corey said. “Did you fall into
someone’s locker again?” The complete opposite of Muddy's best
friend, this guy, originally from the poor side of town, towered
over all of them at over six-two and wasn't anything like his
brittle buddy, Otis.