“Tariq has put off Mikhail, our prince, to give us a chance to be together and heal should we need it. He has asked that we attend a meeting tonight with everyone there.”

She made a face. “Lovely.” Her hand slid down his chest. Lower. Hoping to distract him.

He laughed softly and shifted her slightly to give her better access. “I can see you are determined to get your way.”

Her hand stroked. Caressed. She turned her face up for his kiss. “Absolutely.” There was triumph in her laughter.

He didn’t tell her until much, much later that the meeting hadn’t been scheduled until very late in the night.

1. The Carpathian view on healing

2. The Lesser Healing Chant of the Carpathians

3. The Great Healing Chant of the Carpathians

6. Song to Heal the Earth

1. THE CARPATHIAN VIEW ON HEALING

The Carpathians are a nomadic people whose geographic origins can be traced at least as far as the Southern Ural Mountains (near the steppes of modern-day Kazakhstan), on the border between Europe and Asia. (For this reason, modern-day linguists call their language “proto-Uralic,” without knowing that this is the language of the Carpathians.) Unlike most nomadic
peoples, the Carpathians did not wander due to the need to find new grazing lands as the seasons and climate shifted, or to search for better trade. Instead, the Carpathians’ movements were driven by a great purpose: to find a land that would have the right earth, a soil with the kind of richness that would greatly enhance their rejuvenative powers.

Over the centuries, they migrated westward (some six thousand years ago), until they at last found their perfect homeland—their
susu
—in the Carpathian Mountains, whose long arc cradled the lush plains of the kingdom of Hungary. (The kingdom of Hungary flourished for over a millennium—making Hungarian the dominant language of the Carpathian Basin—until the kingdom’s lands were split among several countries after World War I: Austria, Czechoslovakia, Romania, Yugoslavia and modern Hungary.)

Other peoples from the Southern Urals (who shared the Carpathian language, but were not Carpathians) migrated in different directions. Some ended up in Finland, which explains why the modern Hungarian and Finnish languages are among the contemporary descendants of the ancient Carpathian language. Even though they are tied forever to their chosen Carpathian homeland, the Carpathians continue to wander as they search
the world for the answers that will enable them to bear and raise their offspring without difficulty. 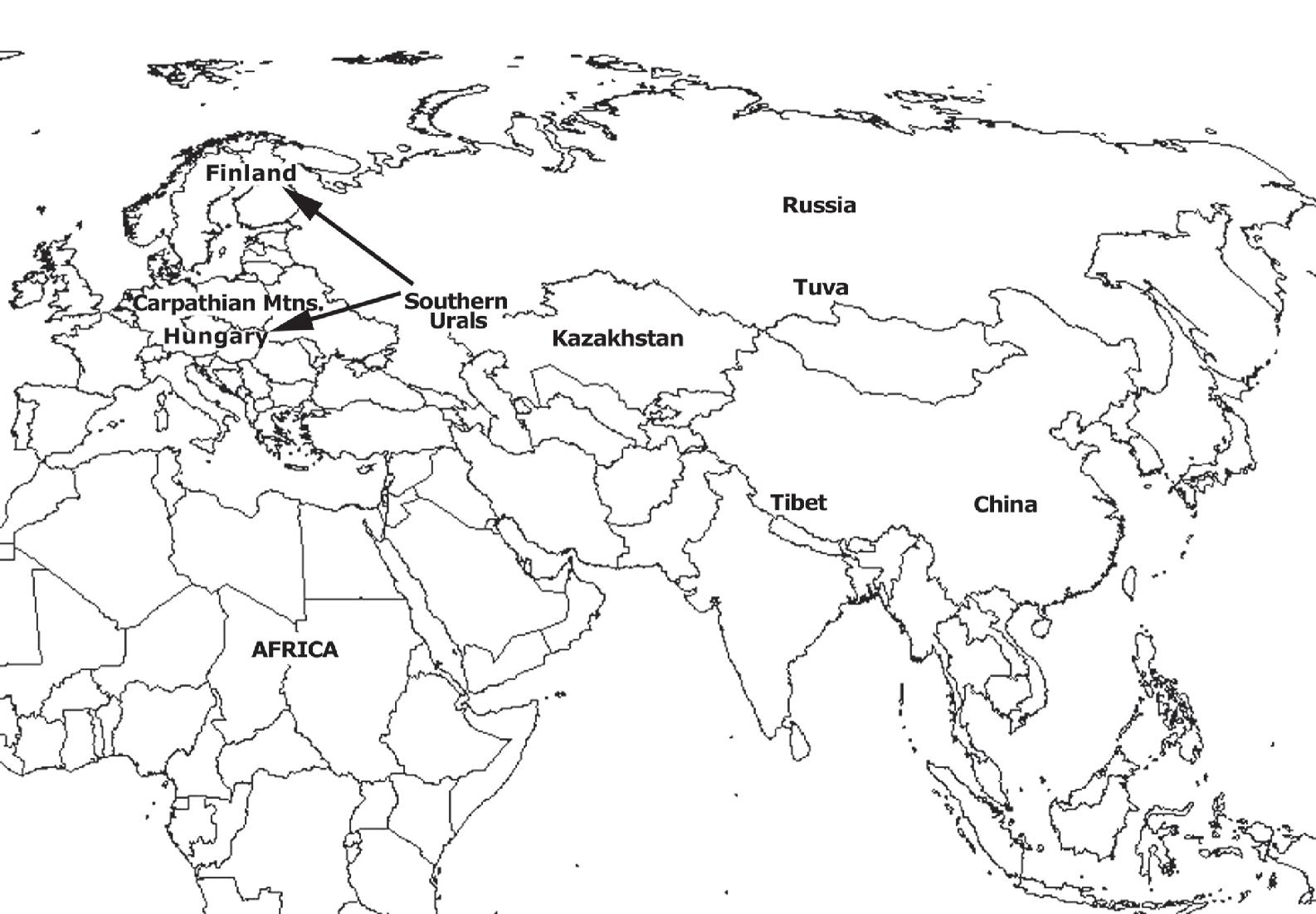 Because of their geographic origins, the Carpathian views on healing share much with the larger Eurasian shamanistic tradition. Probably the closest modern representative of that tradition is based in Tuva (and is referred to as “Tuvinian Shamanism”)—see the map on the previous page.

The Eurasian shamanistic tradition—from the Carpathians to the Siberian shamans—held that illness originated in the human soul, and only later manifested as various physical conditions. Therefore, shamanistic healing, while not neglecting the body, focused on the soul and its healing. The most profound illnesses were understood to be caused by “soul departure,” where all or some part of the sick person’s soul has wandered away from the body (into the nether realms), or has been captured or possessed by an evil spirit, or both.

The Carpathians belong to this greater Eurasian shamanistic tradition and share its viewpoints. While the Carpathians themselves did not succumb to illness, Carpathian healers understood that the most profound wounds were also accompanied by a similar “soul departure.”

Upon reaching the diagnosis of “soul departure,” the healer-shaman is then required to make a spiritual journey into the netherworlds to recover the soul. The shaman may have to overcome tremendous challenges along the way, particularly fighting the demon or vampire who has possessed his friend’s soul.

“Soul departure” doesn’t require a person to be unconscious (although that certainly can be the case as well). It was understood that a person could still appear to be conscious, even talk and interact with others, and yet be missing a part of their soul. The experienced healer or shaman would instantly see the problem nonetheless, in subtle signs that others might miss: the person’s attention wandering every now and then, a lessening in their enthusiasm about life, chronic depression, a diminishment in the brightness of their “aura” and the like.

2. THE LESSER HEALING CHANT OF THE CARPATHIANS

Kepä Sarna Pus
(The Lesser Healing Chant)
is used for wounds that are merely physical in nature. The Carpathian healer leaves his body and enters the wounded Carpathian’s body to heal great mortal wounds from the inside out using pure energy. He proclaims, “I offer freely my life for your life,” as he gives his blood to the injured Carpathian. Because the Carpathians are of the earth and bound to the soil, they are healed by the soil of their homeland. Their saliva is also often used for its rejuvenative powers.

It is also very common for the Carpathian chants (both the Lesser and the Great) to be accompanied by the use of healing herbs, aromas from Carpathian candles and crystals. The crystals (when combined with the Carpathians’ empathic, psychic connection to the entire universe) are used to gather positive energy from their surroundings, which then is used to accelerate the healing. Caves are sometimes used as the setting for the healing.

The Lesser Healing Chant was used by Vikirnoff Von Shrieder and Colby Jansen to heal Rafael De La Cruz, whose heart had been ripped out by a vampire as described in
Dark Secret
.

The same chant is used for all physical wounds. “Sívadaba” (“into your heart”) would be changed to refer to whatever part of the body is wounded.

You lie as if asleep, without beat of heart, without airy breath.

I offer freely my life for your life.

My spirit of light forgets my body and enters your body.

My spirit of light sends all the dark spirits within fleeing without.

I press the earth of our homeland and the spit of my tongue into your heart.

At last, I give you my blood for your blood.

To hear this chant, visit:
http://www.christinefeehan.com/members/
.

3. THE GREAT HEALING CHANT OF THE CARPATHIANS

The most well-known—and most dramatic—of the Carpathian healing chants is
En Sarna Pus
(The Great Healing Chant)
. This chant is reserved for recovering the wounded or unconscious Carpathian’s soul.

Typically a group of men would form a circle around the sick Carpathian (to “encircle him with our care and compassion”) and begin the chant. The shaman or healer or leader is the prime actor in this healing ceremony. It is he who will actually make the spiritual journey into the netherworld, aided by his clanspeople. Their purpose is to ecstatically dance, sing, drum and chant, all the while visualizing (through the words of the chant) the journey itself—every step of it, over and over again—to the point where the shaman, in trance, leaves his body, and makes that very journey. (Indeed, the word
ecstasy
is from the Latin
ex statis
, which literally means “out of the body.”)

Something of the geography of the “other world” is useful for us to examine, in order to fully understand the words of the Great Carpathian Healing Chant. A reference is made to the “Great Tree” (in Carpathian:
En Puwe
). Many ancient traditions, including the Carpathian tradition, understood the worlds—the heaven worlds, our world and the nether realms—to be “hung” upon a great pole, or axis, or tree. Here on earth, we are positioned halfway up this tree, on one of its branches. Hence many ancient texts referred to the material world as “middle earth”: midway between heaven and hell. Climbing the tree would lead one to the heaven worlds. Descending the tree to its roots would lead to the nether realms. The shaman was necessarily a master of movement up and down the Great Tree, sometimes moving unaided, and sometimes assisted by (or even mounted upon the back of) an animal spirit guide. In various traditions, this Great Tree was known variously as the
axis mundi
(the “axis of the worlds”), Ygddrasil (in Norse mythology), Mount Meru (the sacred world mountain of Tibetan tradition), etc. The Christian cosmos, with its heaven, purgatory/earth and hell, is also worth comparing. It is even given a similar topography in Dante’s
Divine Comedy
: Dante is led on a journey first to hell, at the center of the earth; then upward to Mount Purgatory, which sits on the earth’s surface directly opposite Jerusalem; then farther upward first to Eden, the earthly paradise, at the summit of Mount Purgatory; and then upward at last to Heaven.

In the shamanistic tradition, it was understood that the small always reflects the large; the personal always reflects the cosmic. A movement in the greater dimensions of the cosmos also coincides with an internal movement. For example, the
axis mundi
of the cosmos corresponds with the spinal column of the individual. Journeys up and down the
axis mundi
often coincided with the movements of natural and spiritual energies (sometimes called
kundalini
or
shakti
) in the spinal column of the shaman or mystic.

In this chant, ekä (“brother”) would be replaced by “sister,” “father,” “mother,” depending on the person to be healed.

My brother’s body is a lump of earth, close to death.

We, the clan of my brother, encircle him with our care and compassion.

But my brother’s soul is only half. His other half wanders in the netherworld.

My great deed is this: I travel to find my brother’s other half.

We dance, we chant, we dream ecstatically, to call my spirit bird, and to open the door to the other world.

I mount my spirit bird and we begin to move; we are under way.

Following the trunk of the Great Tree, we fall into the netherworld.

It is cold, very cold.

My brother and I are linked in mind, heart and soul.

My brother’s soul calls to me.

Encounter I the demon who is devouring my brother’s soul.

In anger, I fight the demon.

He is afraid of me.

I strike his throat with a lightning bolt.

I break his body with my bare hands.

He is bent over, and falls apart.

I rescue my brother’s soul.

I lift my brother’s soul in the hollow of my hand.

I lift him onto my spirit bird.

Following up the Great Tree, we return to the land of the living.

He is complete again.

To hear this chant, visit:
http://www.christinefeehan.com/members/
.