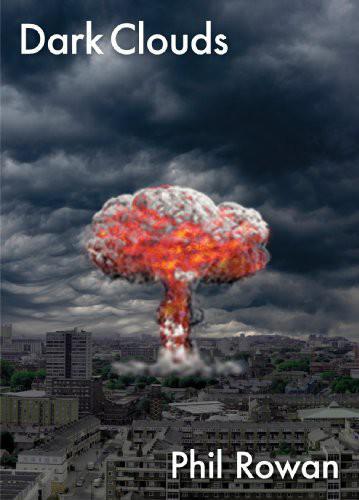 All rights reserved. No part of this book may be reproduced, stored in a retrieval system or transmitted in any form or by any means without the prior written permission of the author.

I am grateful to my family and friends as I struggled with four Rudi Flynn novels over recent years. They all gave me a lot of encouragement, but my warmest embrace has to be for my partner, Jean, who has always been my greatest source of inspiration.

So
Dark Clouds
is for her ... with love and many thanks.

Dark Clouds
centres on al-Qaeda terrorists who hope to cause nuclear mayhem in London. The main character, Flynn, enjoys a drink and is empathetic with friendly females ... but is he really up for tackling dangerous Islamic jihadists – people that see Westerners as misguided infidels who need to experience the purifying wrath of Allah?

The bad guys want to irradiate ‘decadent’ Brits, who are perceived as enemies of Allah. It is scary, but a US/UK Security Service team believe that Rudi Flynn can help them avert disaster. His Muslim American girlfriend, Faria, fell with the North Tower in New York on 9/11 and he is now working as a journalist in London.

He is trying to forget what happened in Manhattan on that fateful Tuesday, but he still has some Islamic contacts. One of whom, Rashid, is in the loop with jihadists and wants to cross over. Flynn is wary about going undercover, but an oil rich Syrian he knows is suspected of funding the bad guys. On the up side, he has just met Ingrid – an artist who invites him to join her on a Greek island where he can write about a fiery Fenian ancestor. This won’t happen, however, unless he delivers for Carla Hirsch: his ice cold and very focused US Homeland Security controller.

A bomb has exploded outside the Sacré Coeur Basilica in Paris and there are many casualties. I get the story in London where a TV journalist is reporting from the scene.

‘
The victims are mainly women and children
,’ she says. ‘
Innocent young choristers who were gathering with their parents and teachers for a singing festival that was to be held this evening in the Montmartre church.
’

Is Osama targeting Paris? I hold my breath and feel ill while I wait for an explosion. I’m also choking with the dust that enveloped Manhattan and seeped into my apartment on the Lower East Side when the World Trade Centre collapsed on 9/11.

The TV journalist has moved on to a guy with a rucksack that a tourist caught on video outside the old church. ‘
Intelligence sources here think he may be an Algerian
,’ she says and I’m nodding. I’ve seen people with similar features in North Africa and the Middle East. He hasn’t shaved and he looks nervous. ‘
Already,
’ the reporter adds, ‘
there are crowds gathering outside the Presidential Palace on the Grande Rue du Foubourg Saint-Honore and they are angry about what has happened today …
’

‘
These people are barbarians!
’ an elderly woman shouts. She is clinging to the President’s front gates and the cops are reluctant to pull her off. ‘
We don’t want them in France!
’ she yells. ‘
You listen to your voters, Monsieur President …the murderers must be dealt with …now … do you hear me? Immédiatement!
’

It’s an emotional response. But I can see where she’s coming from, and I’m homing in on angry Islamists in the Tora Bora Mountains when my phone rings.

‘You got the news from Paris?’

‘Of course …but we want feedback. You know … interviews with people around the church and local colour stuff. Can you get over there and see what’s happening.’

No problem. I’m a freelance journalist in London and my commissioning editors are mainly in New York. I’ll get a flight, or take the train, but not just yet.

‘I have contacts here I need to speak with,’ I tell Lowenna. ‘They’re Muslims, and they could be helpful.’

I have a missed call and a message from Khalad asking if we can meet in Hyde Park. I text to say I’m on my way and I feel better when I see kids playing in the Square’s communal gardens. The sun’s come out, and for a moment I think England is a good place to be.

London is my adopted city. I’ve temporarily swapped my apartment on the Lower East side in New York for a writer’s place in Islington, where I’m starting to fit in.

Unfortunately, I get a Montenegrin driver at the cab office on the Upper Street.

‘I am not a Muslim,’ he says with a menacing scowl.

‘But you know what we did with these people in Bosnia and Kosovo.’

I have cuttings library images of Islamic Yugoslavians being lined up and shot on the orders of Slobodan Milosovich and his ruthless cronies. It happened while I was a student in California, but the mass graves stayed with me. I also knew that quite a few Montenegrins had helped the Serbs to murder anyone they could find who worshipped Allah.

‘Yeah – well, it wasn’t our problem,’ the facially scarred driver tells me. ‘They brought it on themselves. If they had behaved properly, we might not have killed so many of them.’

I have a choice. I can either listen to this fuckwit or tell him to stop and get another cab. I get a break when my phone rings and another American magazine editor asks how much of the Sacré Coeur has been destroyed ... and is there any truth in the rumour that the French President has been photographed with yet another mistress?

I don’t have any details on the church, but I’ve got wads of stuff on Monsieur le President. Most of it is juicy but embroidered speculation.

‘I’ll e-mail you a full piece on the explosion tonight,’ I promise. ‘And I’ll call you from Paris tomorrow.’

This and a couple of queries about whether or not there are any clear al-Qaeda links to what happened in Montmartre gets me to the Bayswater Road entrance at Hyde Park. I wanted the gate opposite the Hilton, but I’m on the phone to a travel agent when Mister Montenegro pulls up in a car park by the Serpentine. I’ve got a flight to Charles de Gaulle in the morning, and I pretend not to notice when my driver sneers at the three pound tip I’ve added to the fare.

There are roller-skating nutters, delinquent skateboarders and Arabic pensioners by the lake, and I’m thinking of thousand year old clashes between Christian crusaders and civilised Islamic empires when I finally get to the riverside café.

Khalad Hassan waves as I stumble on the steps and he’s grinning when I get to his secluded patio table.

Khalad is a Tunisian engineer, presently taking an accountancy course at London University. We met at a Muslim forum for interested outsiders where I was collecting material on relations between Islamists and Westerners since 9/11. He was surprised that anyone should want to do this, but we’ve met several times over the past couple of months.

‘This is terrible, what has happened in Paris,’ he says. There are pictures on his BlackBerry of crumbling masonry at the entrance to the Sacré Coeur cathedral. He’s also got one of the nervous Algerian and his suspect rucksack.

‘Is he the bomber?’ I ask when a Polish girl’s taken my order for coffee and a crayfish sandwich with salad.

In August 2001, I spent two weeks in the Hamptons with Faria Bailey. She was twenty-four and had just got a job as a lawyer at the World Trade Centre in New York. We were in love. I’m sure of that, although cautious friends had alluded to differences between us. ‘
Her mother’s a Muslim, Rudi – there’s definitely a culture gap between you.
’

No way – I couldn’t accept this. We were made for each another. We knew what the other was thinking most of the time, and it was great. We were going to get married and have kids. I had already bought a copy of the Koran, and I thought the Islamic Turks were more civilised than lumpen Christian crusaders who had gone out to subdue them.

Life was good, and I was kissing Faria in a dream when Mohammed Atta flew American Airlines flight 11 from Boston into the North Tower on that fateful Tuesday. Faria’s office was destroyed by the hijacked plane and they never found her body. My world imploded that evening. I wandered around in a daze for quite a while afterwards. I was angry, but I didn’t know who to blame. I still don’t, and it’s been helpful to talk with people like Khalad. Only now, he’s uncertain and I’m concerned.

‘Are you seeing Rashid later?’ he asks.

‘He wants to speak with you, Rudi.’

‘I think he needs an intermediary.’

This is not looking good. I saw Khalad as a solid rock guy. Someone I could talk to, who made me feel confident about the future. Rashid was the same. A gently gay Kashmiri. OK, he had written a book,
Our Abyss
, which was about different perspectives between Muslims and the West. But he liked playing cricket, and he kept telling me how pleased he was about the tolerance he had experienced in the UK.

‘What’s happening?’ I ask Khalad when my sandwich and coffee arrive and the Polish girl grins.

‘There is a lot of pressure,’ he says as she sashays off.

‘The activists, Rudi … they’re getting bolder.’

For most of the time since the towers collapsed, I kept thinking it was a one off gesture by lunatics. I was convinced that Mohammed Atta was mad. And as for Osama – well, maybe having so many rich, layabout brothers and sisters confused him. My theory was that he needed to stand out from the crowd, and 9/11 was his calling card.

‘So blowing up the Sacré Coeur this morning is a new beginning. Is that what you’re telling me?’

Khalad’s embarrassed. His eyes are on the table and he’s coughing.

‘I think it might be better if we don’t meet for a while,’ he says.

‘Because it’s dangerous, Rudi – for both of us.’

I have a UK Home Office contact. He’s been helpful with a few off the record briefings for features I’ve sent to editors in New York. If I said I knew a wobbly Tunisian who might be able to finger a few dodgy jihadists, there could be a quid pro quo. Khalad might spill the beans, and in return there could be a cute little cottage in the West Country, a new identity, and occasional flights to and from Tripoli for discreet family visits.

‘I appreciate that something’s worrying you,’ I say and Khalad nods. His hands are shaking. His dark eyes are flitting nervously from one side of the Serpentine to the other.