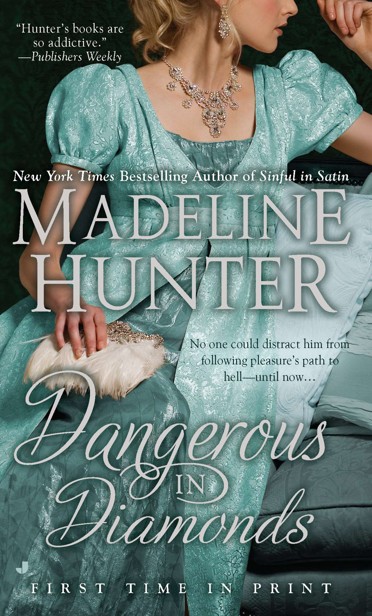 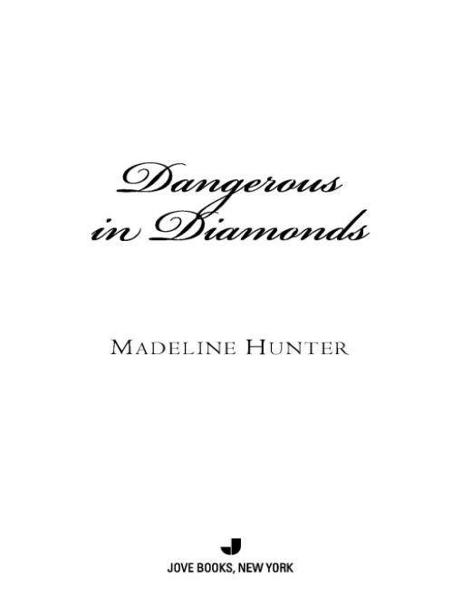 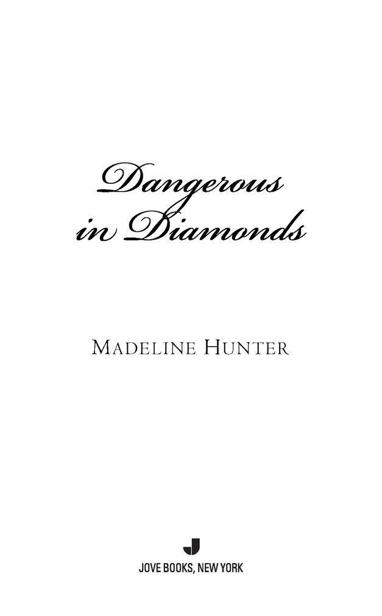 Table of Contents
Title Page
Copyright Page
Chapter One
Chapter Two
Chapter Three
Chapter Four
Chapter Five
Chapter Six
Chapter Seven
Chapter Eight
Chapter Nine
Chapter Ten
Chapter Eleven
Chapter Twelve
Chapter Thirteen
Chapter Fourteen
Chapter Fifteen
Chapter Sixteen
Chapter Seventeen
Chapter Eighteen
Chapter Nineteen
Chapter Twenty
Chapter Twenty-one
Chapter Twenty-two
Chapter Twenty-three
Chapter Twenty-four
Chapter Twenty-five
Chapter Twenty-six
“How long has it been, Mrs. Joyes? Since a man kissed you anywhere, even on the mouth?”
Anywhere ?
His breath flowed softly over her lips, making her head spin and her blood race. “A good number of years, I think. What a sinful waste.” His presence wrapped her, then his arms did too.
A kiss, careful but confident. She resisted the impulse to close her eyes and float away on the intimacy, but she was tempted far more than she ever expected to be. Within her shock she struggled to hold back the dreamy tide of pleasure that threatened to inundate her and drown her very sense of herself.
But, oh, it was too sweet, and so poignant that she wanted to weep. The warmth wrenched her heart. A part of her long denied, long buried and ignored, ached to break free and sing. She was a girl again within that embrace, and painfully alive.
PRAISE FOR MADELINE HUNTER’S NOVELS
“A writer whose novels every reader will adore.”
—
Romantic Times
(Top Pick)
“Richly spiced with wicked wit and masterfully threaded with danger and desire, the superbly sexy first book in Hunter’s new Regency historical quartet is irresistible and wonderfully entertaining.”
—
Booklist
(starred review)
Berkley titles by Madeline Hunter
RAVISHING IN RED
PROVOCATIVE IN PEARLS
SINFUL IN SATIN
DANGEROUS IN DIAMONDS
THE BERKLEY PUBLISHING GROUP
Published by the Penguin Group
Penguin Group (USA) Inc. 375 Hudson Street, New York, New York 10014, USA
Penguin Group (Canada), 90 Eglinton Avenue East, Suite 700, Toronto, Ontario M4P 2Y3, Canada (a division of Pearson Penguin Canada Inc.)
Penguin Books Ltd., 80 Strand, London WC2R 0RL, England
Penguin Group Ireland, 25 St. Stephen’s Green, Dublin 2, Ireland (a division of Penguin Books Ltd.)
Penguin Group (Australia), 250 Camberwell Road, Camberwell, Victoria 3124, Australia (a division of Pearson Australia Group Pty. Ltd.)
Penguin Books India Pvt. Ltd., 11 Community Centre, Panchsheel Park, New Delhi—110 017, India Penguin Group (NZ), 67 Apollo Drive, Rosedale, Auckland 0632, New Zealand (a division of Pearson New Zealand Ltd.)
Penguin Books (South Africa) (Pty.) Ltd., 24 Sturdee Avenue, Rosebank, Johannesburg 2196, South Africa
Penguin Books Ltd., Registered Offices: 80 Strand, London WC2R 0RL, England
This is a work of fiction. Names, characters, places, and incidents either are the product of the author’s imagination or are used fictitiously, and any resemblance to actual persons, living or dead, business establishments, events, or locales is entirely coincidental. The publisher does not have control over and does not have any responsibility for author or third-party websites or their content.
DANGEROUS IN DIAMONDS
A Jove Book / published by arrangement with the author
PRINTING HISTORY
Jove mass-market edition / May 2011
Copyright © 2011 by Madeline Hunter.
All rights reserved.
No part of this book may be reproduced, scanned, or distributed in any printed or electronic form without permission. Please do not participate in or encourage piracy of copyrighted materials in violation of the author’s rights. Purchase only authorized editions.
For information, address: The Berkley Publishing Group,
a division of Penguin Group (USA) Inc.,
375 Hudson Street, New York, New York 10014.
eISBN : 978-1-101-51393-4
JOVE
®
Jove Books are published by The Berkley Publishing Group,
a division of Penguin Group (USA) Inc.,
375 Hudson Street, New York, New York 10014.
JOVE
®
is a registered trademark of Penguin Group (USA) Inc.
The “J” design is a trademark of Penguin Group (USA) Inc.

Chapter One
T
he death of a duke is cause for many people to mourn, but none so much as those dependent on his patronage. So it was that the passing of the fourth Duke of Becksbridge left many a relative and retainer in tears. A few had to swallow the inappropriate inclination to smile, however, in particular several persons named in his testament as recipients of gifts or pensions.
One such beneficiary neither wept nor rejoiced. Rather, on the Tuesday following the duke’s funeral, he finally attended to the oddity that he had received any gift at all.
“I hope he did not expect me to maintain the mourning rituals in his memory because of this,” Tristan, Duke of Castleford, muttered.
He examined the deeds of the properties he had just inherited. If his head did not ache from the sobriety he adopted once a week on Tuesdays, he might muster some grief or nostalgia for this recently departed fellow peer. It would take considerable effort on the best of days, however.
Becksbridge had been a collateral relative, some distance removed, and most of the bequeathed holdings appeared to be distant as well. Also small. So small and insignificant as to hardly be worth the ink used to record the gift in the will.
“You do not intend to mourn? He was an important man and much esteemed.” Mr. Edwards, his bespectacled secretary, spoke from his paper-covered desk in the study where together they labored on Castleford’s business affairs.
“He was an ass. Worse, a boring, self-righteous ass. The boring part was only tiresome, but the self-righteous part unforgivable.”
The latter had been an inherited turn of character, but in Castleford’s opinion, that hardly absolved Becksbridge from being tedious in executing the tendency. That entire side of their complex family tree was so smug in their goodness that it made one want to puke. All the same, if Becksbridge had lived and let live, he might have been tolerable.
But, of course, he couldn’t “let live.” The Becksbridges of the world believed it was the duty of paragons of virtue to remind others they should strive for equal dreariness. In fact, in anticipation of his inheritance, Becksbridge’s son and heir, Gerome, Earl of Latham, had been publishing popular screeds on morality. The next Duke of Becksbridge had already taken his scolds to the world through print and had forged a reputation as an arbiter of morals with his damned essays.
Castleford was inclined to sneer at the irony, but thinking much on the topic would only make his head hurt worse. Still, he knew Latham better than anyone else in the world did. Of similar age, they had raised hell together in years past. Even perfectly tended branches of family trees produce a few wormy fruit. The boring ass was about to be succeeded by a dangerous hypocrite.
“You have that sniveling expression you wear when you are choking on swallowed words, Edwards. Do you disapprove that I speak ill of the dead?”
Edwards flushed. Only twenty-five years of age, he had not yet learned to keep his own counsel on Tuesdays, especially when his employer invited him to speak freely. “The duke was unparalleled, and he was very generous. It is said he endowed an orphanage in his will.”
“Unparalleled? Are you saying outright, to my face, that I am not his equal? That is ungrateful for a secretary who may have to labor on the one day a week when I tend to my estate, but who otherwise has more freedom of movement than any servant ought.”
“I—that is, you are unparalleled as well, Your Grace. Everyone says so, and—”
“I do not hold with the notion that asses should be fondly remembered just because they have the means to spread around gifts to make others beholden. As for his generosity to
me
, I neither need nor want these small landholdings. The man has managed to be a nuisance beyond the grave.”
“The properties all have tenants. Managing them will not create more trouble
.
”
Castleford peered at the deeds. “It is too peculiar that he gave them to me at all. We were not fond of each other. We had not spoken civil words in years.” That was an understatement. Their few meetings had been marked by reproaches on Becksbridge’s part and ridicule on Castleford’s.
A letter had been delivered with the deeds. Castleford tore it open.

You are no doubt surprised by the legacy that I left you, since you of all men need nothing from me. Neither the lands nor the money would form more than a tiny drop in your ocean of wealth. Therefore I assume that you will not care that it was never my intention for you to enjoy the fruits of either. Rather, I am depending on what little is left of the better side of your character, and requesting that you discreetly handle a matter for me that I prefer not to address through my testament.
The landholdings that I left you are currently used by tenants in whose welfare I have a committed interest. It is my wish that the tenants be allowed to remain indefinitely at the current rent of one pound a year. Furthermore, the money left to you should be used to ensure that the tenants’ families are never in want of the basics of life.
I trust this is a small matter that your stewards can execute without troubling you. It should in no way interfere with the inebriated fornications that normally occupy your time. (And which, I am obligated to remind you, bring disrepute to your name and blood, a likely early death to your person, and inevitable damnation to your everlasting soul.)
Becksbridge