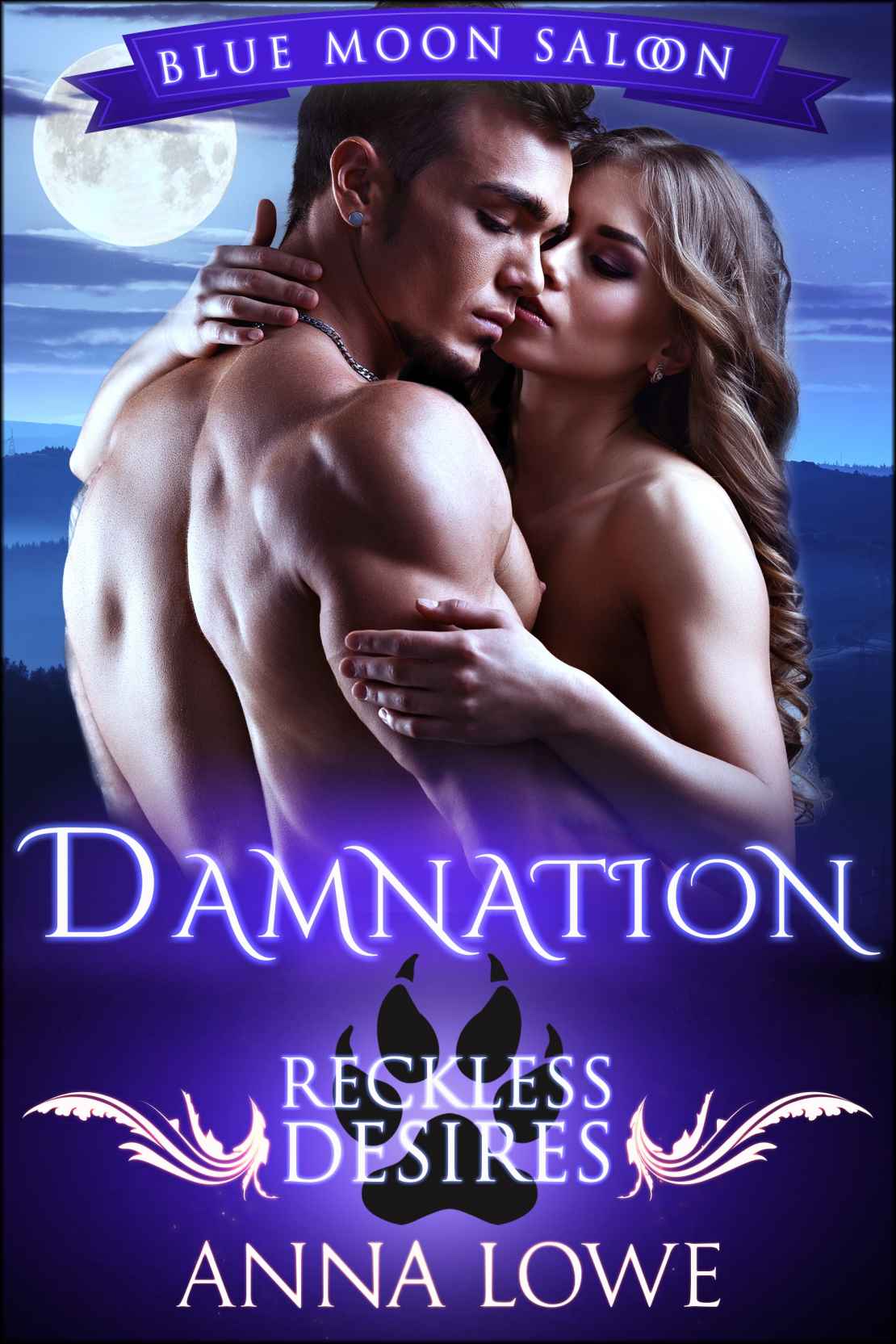 Editing by Lisa A. Hollett

This book or any portion thereof may not be reproduced or used in any manner without the express written permission of the author except for the use of brief quotations in articles or reviews.

This is a work of fiction. Any resemblance to actual persons is purely coincidental.

Other books in this series
Blue Moon Saloon

Perfection
(a short story prequel to the series)

The Wolves of Twin Moon Ranch

Gambling On Her Dragon
(A paranormal romance with a zany twist)

Get your free e-books now!

Sign up for my newsletter at
annalowebooks.com
to get three free books!

In the darkest corner of an alpha’s broken heart, fate ignites a flicker of hope. From lusty wolves and burly bears to decadent dragons, these alphas hunger for inner peace which can only come from finding their perfect mate. Seven best-selling authors each bring you a series of standalone books filled with redemption, love, and reckless desire — not to mention a whole lot of primal growling as these alpha heroes claim their fated mates.

Behind the doors of the Blue Moon saloon, alpha shifters confront their darkest fears and their deepest desires.

Jessica Macks is a she-wolf on the run from a band of murderous rogues. When she finds a job at a shifter bar, it seems like a safe haven from her hunted life on the road. But the minute she walks through the swinging doors of the Blue Moon Saloon and comes face-to-face with the man she once loved, she’s tempted to march right back out. No way, no how is she risking her heart to that infuriating alpha bear again.

Simon Voss thought he lost everything in an ambush months before: his home, his family, his past. His new job at the Blue Moon Saloon is a desperately needed fresh start on life. Then along comes Jessica, the irresistible she-wolf his clan forced him to reject years before. When Simon is obliged to hire Jessica and work side by side with the one woman to ever make his bear go wild, he’s half in heaven, half in hell. He hasn’t forgotten her, and she sure as hell hasn’t forgiven him. Is this just another path to heartbreak or his last chance to claim his destined mate?

Before we start... Be sure to
sign up for my newsletter
– you’ll get three free stories right away, and you’ll be the first to hear about new releases, special deals, and exclusive bonus content.

“Are you sure you want to do this?” Tina asked.

Jessica forced herself to keep up a steady, confident stride and nodded firmly. “I want to do this.”

I need to do this
was more like it, but pride was about the only thing she had left.

Tina glanced at her, but Jessica kept walking down the sidewalk in the dusty western town, pretending not to notice. She was getting to be a champ at pretending lots of things, like the fact she wasn’t shaking inside.

If she hadn’t had her sister, Janna, to think of, Jessica might have done just that — hit the road running and never looked back. Except she’d tried that already, and it hadn’t worked.

Time to stop running
, she told her inner wolf.

“This is going to be great!” Janna smiled. “Is that the saloon?”

Jess shook her head. God, she was getting bitter. Her sister was right. This could be their lucky break. They’d found a pack willing to set them up with work and a place to stay. And not just any pack, but Twin Moon, one of the most powerful packs to emerge in the Southwest in recent years. Tina Hawthorne-Rivera was a leading member of that pack, and she seemed to have a soft spot for wayward shifters in need of a second chance.

Jessica bit her lip, thinking about the long road she’d traveled in the past few months. Maybe she and Janna could finally stop looking over their shoulders and catch their breath.

Jess drew in a long breath and slowed to look it over.

She couldn’t have conjured anything more
Wild West
out of her imagination if she’d tried. The whole historic center of the old town was like that — a high-altitude frontier town, barely dragged into modern times.

Yes, well, home was gone, and she could never go back to that place.

Want my mate,
the wolf whimpered.

Yeah, well.
He didn’t want us.
When would the stupid beast get that through its head?

Anger worked better than the grief that welled up every time she thought of that part of her past, so she hung on to it for the time being. She combed her long, brown hair back and stood at her full five foot eight. She needed this job, damn it. She’d get it.

“This is so cute!” Janna exclaimed. “Don’t you think, Jess?”

She took in the peeling paint, the dusty windows.
Cute
might describe the empty shop to the right, but not the saloon, which was dark and dreary, just like the people who gravitated toward a place like that, she’d bet. Waitressing, she didn’t mind. But getting her ass pinched… No, thanks.

She glanced at her reflection in the glass and grimaced at her worn jeans and checkered top. Maybe she didn’t have to worry about getting harassed. She’d gone from lean and athletic to downright gaunt in the past couple of months.

“The saloon ran well for years — well enough to pay the rent, at least — but the man we were leasing it to retired, and the new guys only took it over a month ago.”

Jess raised an eyebrow in a question.

Tina gave a tiny nod and lowered her voice. “Shifters, like us. None of the neighbors know.” Her stern look made it clear that none of the neighbors could ever find out. That was a given in the shifter world. The constant secrecy, the veil of normalcy. Shifters could blend in perfectly as long as they kept their beast sides tightly leashed.

Tina tilted her head toward the wooded hills surrounding the town. “Good place to run when you need a break.”

When your wolf needs a break
, she meant. Every shifter needed a chance to let their inner animals run free — and not only under the light of a full moon.

“The building is over a hundred years old,” Tina went on, speaking louder again.

Yes, she could see it in the detailed moldings, the ornate windows, the false front.

“The ground floor is really three units, but two were combined for the saloon.”

Jessica’s eyes kept traveling to the smaller place on the right. The cute one. “What’s in there?”

Tina sighed. “It used to be a small art gallery. Before that, a café. But we haven’t been able to find a renter for it in years.”

God, if she had some start-up capital… Jessica shook the thought off. It would take a hell of a lot of tips to get to the point where she could even think about that. And until she had peace of mind about the rogues hounding her… Why even wish?

“You can live upstairs,” Tina said. “If you’re sure you don’t want to stay on the ranch. We do have the space, you know.”

Jess wasn’t sure about anything, but living among a pack of strangers didn’t really appeal. Not even a whole pack of wolves as nice as Tina. Plus, neither Jess nor Janna had their own wheels, and even if they did, the forty-five-minute commute into town each day — and each late night — would be a bit much.

“This will be fine,” Jess said, trying to keep doubt out of her voice.

“It will need some work…” Tina warned.

Jessica wondered if she meant the saloon, the apartment upstairs, or the whole new life she faced now.

“…and you’ll have to share a bathroom with the guys…”

God, Jessica hoped not. That was the other unknown in the equation. She’d have to live under the same roof as her new boss or bosses. Who were the two men running the place, anyway? Shifters, was all she knew.