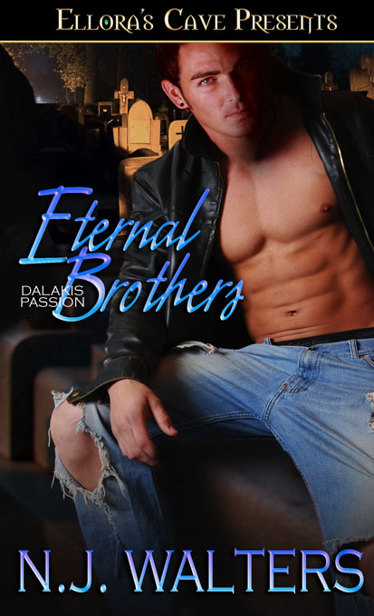 An
Ellora's
Cave
Romantica
Publication
www.ellorascave.com
Eternal Brothers
ISBN 9781419913839
ALL RIGHTS RESERVED.
Eternal Brothers Copyright © 2007 N.J. Walters
Edited by Mary Altman.
Cover art by Les
Byerly
&
Syneca
.
Electronic book Publication October 2007
This book may not be reproduced or used in whole or in part by any means existing without written
permission from the publisher,
Ellora's
Cave Publishing, Inc
.®
1056 Home Avenue, Akron OH 44310-
3502.
This book is a work of fiction and any resemblance to persons, living or dead, or places, events or locales
is purely coincidental. The characters are productions of the authors' imagination and used fictitiously.

Dedication
Thank you to my husband, Gerard, for sharing this incredible journey with me.
Thank you to all the readers who have embraced the
Dalakis
family and this series.
As always, thank you to my amazing editor, Mary, who works above and beyond
to make each book sparkle!