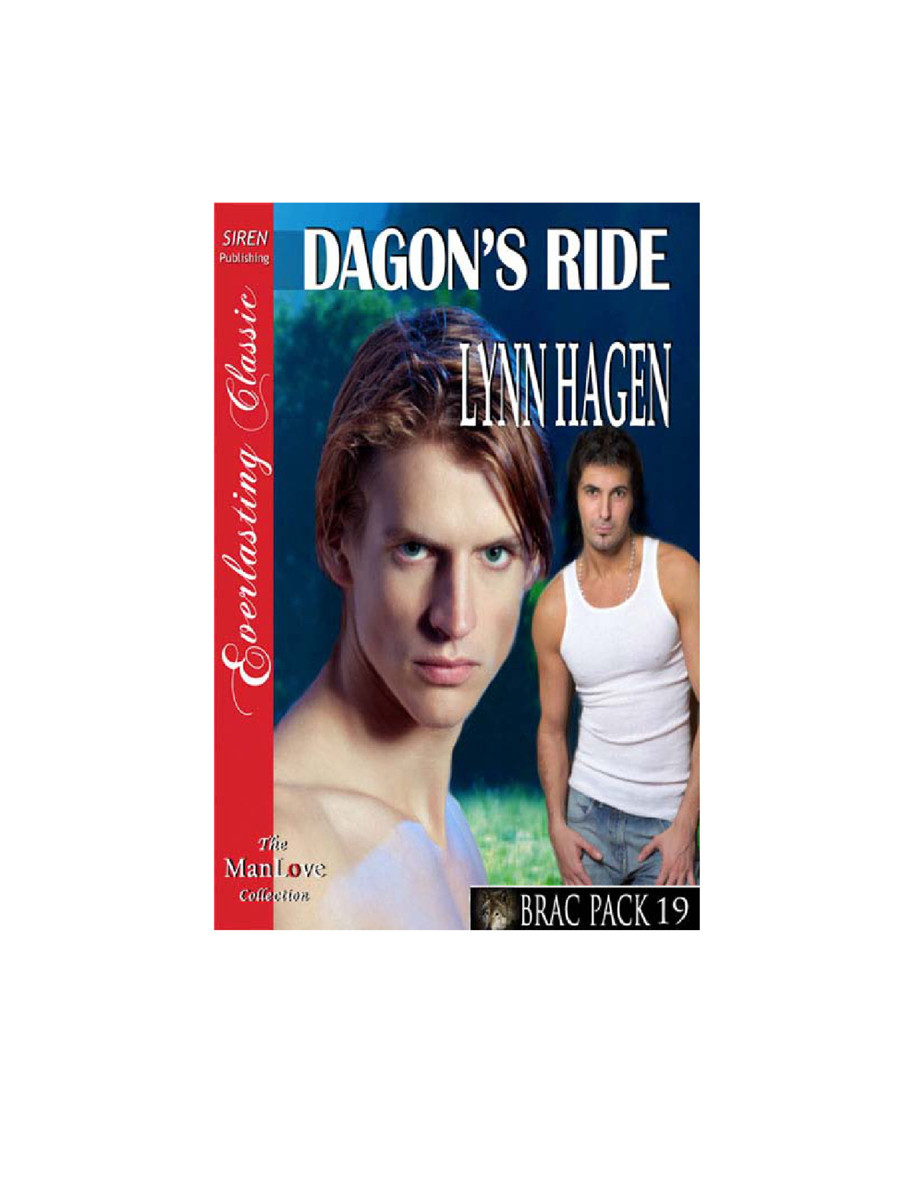 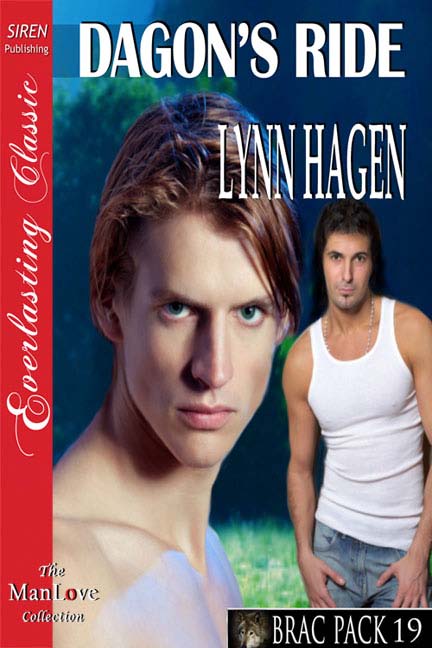 Taylor has spent his whole life listening to his mother viciously bash gay people, and his attraction to Dagon has him confused and ashamed.

Dagon is supportive in the wake of his mate’s doubts and insecurities, and he tries hard to convince Taylor that love knows no boundaries. Dagon had hoped Taylor’s older brother, Joshua, who’s mated Dagon’s brother Law, would be enough to convince Taylor to accept who he is, but Taylor stil refuses to ful y acknowledge his love for Dagon, and Dagon soon grows weary.

Meanwhile, Taylor’s inner demon may be more tangible than anyone could have imagined, and the mates, risking their lives to help Taylor, take off on their most unbelievable adventure yet.

Note:
Each book in Lynn Hagen's Brac Pack col ection features a different romantic couple. Each title stands alone and can be read in any order. However, we recommend reading the series in sequential order.

ABOUT THE E-BOOK YOU HAVE PURCHASED:
Your non-refundable purchase of this e-book allows you to only ONE LEGAL copy for your own personal reading on your own personal computer or device.
You do not have
resell or distribution rights without the prior written
permission of both the publisher and the copyright
owner of this book.
This book cannot be copied in any format, sold, or otherwise transferred from your computer to another through upload to a file sharing peer to peer program, for free or for a fee, or as a prize in any contest.

Such action is illegal and in violation of the U.S. Copyright Law. Distribution of this e-book, in whole or in part, online, offline, in print or in any way or any other method currently known or yet to be invented, is forbidden. If you do not want this book anymore, you must delete it from your computer.

WARNING: The unauthorized reproduction or distribution of this copyrighted work is illegal. Criminal copyright infringement, including infringement without monetary gain, is investigated by the FBI and is punishable by up to 5

All art and logo copyright © 2011 by Siren Publishing, Inc.

If you have purchased this copy of
Dagon’s Ride
by Lynn Hagen from BookStrand.com or its official distributors, thank you. Also, thank you for not sharing your copy of this book.

This is Lynn Hagen’s livelihood. It’s fair and simple. Please respect Ms. Hagen’s right to earn a living from her work.

“I don’t know why I agreed to let you live with Josh. I swear, if he turned you gay, I’ll kill him,” his mother ranted.

Taylor sat at the kitchen table staring at his mom. He couldn’t believe he was back here. “You can’t turn someone gay, Mom.”
God,
what rock did she live under?

“It’s his choice. Josh could choose not to be.
But no
, he had to get even with me for some reason.” She tossed the dishtowel on the table and fisted her hands at her sides, glaring angrily at the wall.

Taylor laid his head on the table and began to bounce his forehead onto the tabletop. After the fight he went through to move in with his older brother Josh, he was back here again. What a nightmare. He had lasted four and a half torturous weeks. Wasn’t that enough? Why couldn’t he leave now instead of waiting the two days until his eighteenth birthday?

Except for the occasional running away and being brought back the same day, he had behaved pretty well. Shouldn’t his sentence be reduced?

“You can’t catch gayness. You’re born that way.” He gritted his teeth. This was an impossible nightmare, and he desperately wanted to wake up.

“No, you are not. Go up to your room and unpack. We need to sit down and pray he hasn’t messed with your head. I’ll call Reverend Glass over and see…”

Taylor tuned her out. He shot up the stairs and went straight to his bedroom window. There was no way he was sticking around for an exorcism. He would be eighteen in a few days. He could make it on his own until then. It was better than smelling mothballs all of the time and watching his mom’s bric-a-bracs watch him. Taylor swore those porcelain cats’ eyes followed him, all eighty of them. And what was with all the dollies? He felt as though he lived in a fabric shop.

Taylor pushed the window open quietly, slid one leg out, found purchase, and then slid the rest of his body down onto the rooftop of the sunroom below. He didn’t care what his brother Josh said, or Josh’s boyfriend Law, not even Dagon, the man who made him feel all jumbled inside. He wasn’t staying here.

His mom’s constant nagging, belittling, and self- righteousness were enough to drive anyone up the wall.

Taylor slid down the roof, turned onto his belly, and then jumped down. There was one place he knew he could hide out, at his best friend Tater’s house.

His mom didn’t know about Tater. No way in hell he was going to tell her about him either. She would only know where to find him if she did.

The guy was the coolest to hang around with, and they always had a good time. Tater had told Taylor that he had a place to stay if he ever needed one, and well, he needed one.

Taylor ran, which turned into a jog, and finally he walked until he arrived at the big red barn behind Tater’s house. He slipped in and found his friend in his usual spot.

“Hey,” he mumbled as he closed the barn door behind him.

Tater looked up from the many pieces of his motorcycle parts strewn about and smiled. “Did Josh just drop you off?” His friend wiped his hands on a shop rag and then stood to greet him. Tater bumped shoulders with Taylor, pointing to a crate. “Have a seat.”

“No, Josh didn’t drop me off. My mom made me move back in with her.” Taylor grabbed the crate and flipped it upside down, sitting on the hard plastic. He shuffled his sneakers on the dirt floor, wishing his two-day sentence was up.

Tater sucked air in through his teeth and pulled his face back as if in pain. “Sorry to hear that. Fuck, man, that sucks.”

“Well, I’m an adult now. I have to be responsible. So you can’t stay in my room, but you can sleep up in the loft.” Tater pointed over his shoulder. “’Course, you can’t be letting my parents know you’re here.”

“You just turned eighteen. Some adult you are. I won’t let them know, thanks.” A few days of sleeping in a loft filled with hay was better than sleeping under the same roof as Mommy Weirdest—as Josh referred to her.

Taylor picked up a wrench, swinging it around his index finger as he watched Tater work. “Have you ever ridden that thing? Every time I see it, it’s in pieces.”

“O nce, but then I didn’t like the way it sounded, so I tore it apart again.”

Taylor yawned. It had been a long four and a half weeks filled with shifters, blue fairy men, and being forced back to the prison his mom called home. He was beat. It felt like the weeks were finally catching up to him now that he could actually relax. Two more days and all of this would be over. “I’m heading up to the loft, ’night.”

“’N ight, I’ll bring you something to eat in the morning.” Tater wiped his hands off again and tossed the rag at the pile of parts. “I’m heading in.”

Taylor climbed the ladder, trying to find the softest spot to sleep in. There didn’t seem to be any. He lay down, thinking of a man with long wavy black hair, big green eyes, and the most incredible Spanish accent.

Taylor came awake with a jolt, struggling against the hand clamped over his mouth. He pushed away from the bales of hay, trying his best to get his footing.

Taylor knew that accent—Dagon. What in the hell was he doing here? He nodded, and the hand was removed.

He followed Dagon’s eyes. The big biker man pointed down into the barn to show him that there was someone down there, and it looked as though they were searching for something. His eyes grew round when an extremely large wolf crept into the barn, sneaking up behind the searching man.

Dagon clasped a hand over Taylor’s mouth again, stopping the scream that was about to emerge, when the wolf attacked the man.

The large biker man turned Taylor into his chest, blocking his eyes from watching what was taking place down below, although Taylor could hear it all.

He heard snarling and hissing and what sounded like Tater’s bike parts flying about. Taylor tried to turn his head to see, but Dagon wouldn’t allow him. “You don’t need to see this,” the man whispered.

Taylor nodded, covering his ears with his hands. He didn’t want to hear it either. What was going on down there? Never before had trouble followed him here. Tater’s was always a place he considered his hidey-hole. Guess he didn’t have that reprieve anymore, but at least it wasn’t his mom who discovered it.

“Okay, you can look now.” The hands eased up on his body, allowing him the option to retreat.

Taylor pulled back from Dagon, staring up at such big green eyes, eyes the color of emeralds. He ducked his head, unsure why he was gawking at the man.