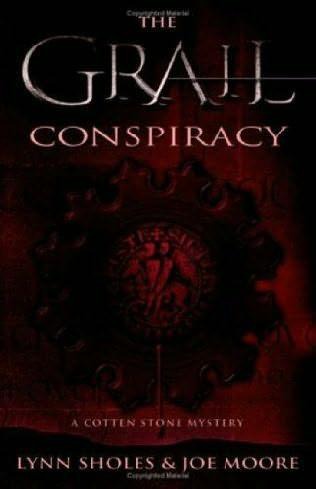 The Grail Conspiracy © 2005 by Lynn Sholes and Joe Moore. All rights reserved. No part of this book may be used or reproduced in any manner whatsoever, including Internet usage, without written permission from Midnight Ink, an imprint of Llewellyn Publications. except in the case of brief quotations embodied in critical articles and reviews. First Edition First Printing, 2005 Book design by Donna Burch Cover design by Kevin R. Brown

Any Internet references contained in this work are current at publication time, but the publisher cannot guarantee that a specific location will continue to be maintained. Please refer to the publisher's website for links to authors' websites and other sources. This is a work of fiction. Names, characters, places, and incidents are either the product of the author's imagination or are used fictitiously, and any resemblance to actual persons, living or dead, business establishments, events, or locales is entirely coincidental. Midnight Ink, an imprint of Llewellyn Publications A Division of Llewellyn Worldwide, Ltd. 2143 Wooddale Drive, Dept.0-7387-0787-2 Woodbury, MN 55125-2989, U.S.A. www.midnightinkbooks.com Printed in the United States of America

Nancy for the match

Gary Givens for the spark

Carol and Tommy for the flame

The authors wish to thank the following for their assistance in adding
a sense of realism to this work of fiction.

"The prince of darkness is a gentleman;"

AFTER CREATING THE HEAVENS and the earth, God produced, in his own
image, the first man, and named him Adam. He then commanded all
the legions of Heaven, the Angels and Archangels, to bow before Adam
and pay him homage and respect, for God was to give Adam control over
all the earth and its creatures. But Lucifer, the most beautiful angel of
all, became jealous and refused to bow before Adam. He gathered others
around him who felt as he did, and they formed a massive army
rebelling against the Creator. A vicious battle raged between God's
angels and those who had turned their backs on Him. So much blood
was shed that it formed two mighty rivers flowing across the scorching
desert. In the end, the great warrior, Michael the Archangel, along with
the Host of Heaven, defeated Lucifer and drove him and his rebels out of
paradise.

The Fallen Angels, Nephilim as they were called in the Bible, were
forbidden to ever enter heaven again. So they descended to the Earth
and furtively walked among men. Down through the ages, their
hatred grew, and Lucifer vowed that someday he would have his
revenge.

But there was one among them who repented and secretly sought
the Creator's forgiveness. His name was Furmiel, Angel of the 11th
Hour. For his remorse, God agreed to give him mortality and let him
live the rest of his existence as a man. Since Furmiel's spirit could
never return to Heaven, God allowed him a daughter who would be
taken at birth to assume her father's place among the Angels. But
because God sensed that the time of Lucifer's revenge was at hand, he
permitted Furmiel's wife to give birth to twins, the second daughter
to live upon the Earth. She grew to adulthood unaware that the
blood of the Nephilim coursed through her veins.

And because of that bloodline, she was destined to be called upon.

"Get out!" The Iraqi driver's thin, high-pitched voice filled the car.
Sand and dust spewed up as the vehicle skidded to a stop.

Jarred awake, Cotten Stone sat upright. "What?" She tried to focus
in the gathering twilight.

"Out! I drive no American."

The radio blared the frantic-paced voice of an Iraqi announcer.

The driver threw open his door and ran to the rear of the car.

Cotten tugged the rusty door handle until it finally gave with a
squeak. "Hey, what are you doing?" she called, jumping out.

He opened the trunk and tossed her two bags onto the shoulder
of the highway.

"You can't leave me here," she said, coming around to the back of
the car. "This is the middle of the damn desert."

The driver cocked his head toward the voice on the radio.

She picked up the duffle bag that held her videotapes and
chucked it back into the trunk. "Listen, I gave you all the cash I have. I don't have any more." She turned her pocket inside out. It was just a
little lie. She had squirreled away close to two hundred dollars and
stuffed it inside an empty film container. Her emergency stash. "Do
you understand? See, no more money. I paid you to take me to the
border."

The driver jabbed her shoulder with a stiff forefinger. "End of ride
for American." He yanked the bag out again and slammed it into her
chest, sending her stumbling backward. Then he was around the car
and in the driver's seat, grinding the gears and spinning the old Fiat
around.

"I don't believe this;' she said. Cotten dropped the bag on the
ground beside her other one and threaded a loose strand of tea-colored hair behind her ear, watching the taillights fade.

The soft whisper of the desert wind carried the first chill of the
evening as the January sky turned from rose to indigo. Cotten pulled
the hooded parka from her carryall and slipped it on, feeling the cold
already creeping through her.

She jogged in place, hands stuffed deep in her pockets. Darkness,
thick as Iraqi crude, poured over the desert. Someone was bound to
come along-had to come along, she thought.

Ten minutes passed with no sign of another vehicle. Finally, she
grabbed the handles of her two carryalls and started walking. Gravel
and sand crunched like glass chips under her field boots. She glanced
behind, wishing for the glow of headlights, but there was only dark,
barren desert.

"I should have known better than to trust that guy." Her voice
cracked from the dryness. Whatever he'd heard on the radio must
have spooked the shit out of him. Cotten knew U.S. forces were gearing up for an invasion. The rumors had been flying around the foreign
press corps. for weeks as the war drums grew louder in Washington
and London. It was no secret that there were already small insertion teams of American and British forces in the country. The invasion
might still be months away, but it was hard to hide the buildup of
forces in the Arab countries bordering Iraq to the south. The local
Arab news buzzed with sightings of Special Forces and Army
Rangers appearing and disappearing in the middle of the night.
There were even strategic flyovers of fighters, Predator drones, and
high altitude recon aircraft testing the vulnerabilities of the Iraqi
missile and radar installations.

Cotten hoisted the strap higher on her shoulder. "It's your own
fault," she said. "You're so damn headstrong."

A few weeks ago she had stood in the office of SNN's news director, Ted Casselman, and begged for the assignment to cover the effects
of economic sanctions on the women and children of Iraq. It was an
important story, she thought, and she didn't care how unstable the
region was. Americans needed to see what sanctions did to innocents.
And, she told Casselman, if the U.S. had plans to attack Iraq, she
wanted to be there, right smack in the center of the action.

Cotten didn't mention that she also needed to put some distance
between her and Thornton Graham. She didn't tell Casselman because
she knew she would probably fall apart if she had to explain. The
emotional wound was still too raw. Her request to do the story made
perfect sense as it was-an eager, hungry reporter-and she wanted
an assignment that would make world headlines.

The Satellite News Network didn't send rookies on assignments in
such volatile locations, Casselman told her repeatedly. Yes, he conceded, she had talent and promise. Yes, he felt she could manage the
pressure. And yes, he agreed that a Middle East assignment right now
was a perfect opportunity to launch a successful career. However, not
only was she a rookie, she was a woman, and a woman in Iraq in the
current conditions was out of the question. Once the war started, the
only journalists would be those chosen in advance by the military and embedded with the troops. And they would only be male. The
rules were set, and the answer was no.

She became incensed and began a tirade about the unfairness of it
all.

Casselman cut her off with another firm, "No."

After she calmed down, Cotten finally got him to agree to let her
tag along with a group of reporters as far as the Turkish border. From
there she could cover the plight of any refugees fleeing north once the
conflict began.

He was furious when he learned she went on to Baghdad.

Then his call came this morning ordering her to leave. "Things
are going to get dicey. Get your sweet ass out of there any way you
can. And I want to see you as soon as you get back. Clear?"

She tried to reason with him and buy more time, but he hung up
before she could make her case.