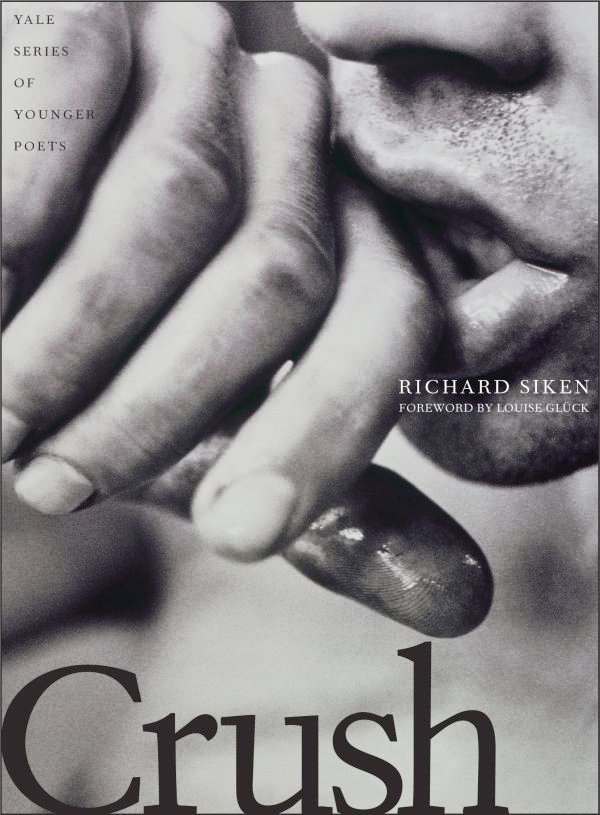 Litany In Which Certain Things Are Crossed Out

A Primer For The Small Weird Loves

I Had A Dream About You

Note: this is compiled for educational purposes only and NOT for resale or profit. Formatting is

as close to the original typeset as possible. Louise Glück's introduction is not included within

this document due to lack of online availability. All poems belong to Richard Siken, © 2005.

and dress them in warm clothes again.

How it was late, and no one could sleep, the horses running

until they forget that they are horses.

It's not like a tree where the roots have to end somewhere,

it's more like a song on a policeman's radio,

how we rolled up the carpet so we could dance, and the days

were bright red, and every time we kissed there was another apple

to slice into pieces.

Look at the light through the windowpane. That means it's noon, that means

Tell me how all this, and love too, will ruin us.

These, our bodies, possessed by light.

Tell me we'll never get used to it.

There are so many things I'm not allowed to tell you.

I touch myself, I dream.

Wearing your clothes or standing in the shower for over an hour, pretending

that this skin is your skin, these hands your hands,

these shins, these soapy flanks.

The musicians start the overture while I hide behind the microphone,

trying to match the dubbing

to the big lips shining down from the screen.

fancy clothes and waterlilies in the pond, and half the night you're

a dependable chap, mounting the stairs in lamplight to the bath, but then

the too white teeth all night,

your hands a river gesture, the birds in flight, the birds still singing

outside the greasy window, in the trees.

There's a part in the movie

where you can see right through the acting,

where you can tell that I'm about to burst into tears,

right before I burst into tears

and flee to the slimy moonlit riverbed

spit it up again. I swallow your heart and it crawls

right out of my mouth.

Lying on the sofa with my eyes closed, I didn't want to see it this way,

We know how the light works,

we know where the sound is coming from.

I'm sorry. We know how it works. The world is no longer mysterious.

An all-night barbeque. A dance on the courthouse lawn.

is thinking. It's thinking of love.

It's thinking of stabbing us to death

and leaving our bodies in a dumpster.

That's a nice touch, stains in the night, whiskey kisses for everyone.

Tonight, by the freeway, a man eating fruit pie with a buckknife

carves the likeness of his lover's face into the motel wall. I like him

and I want to be like him, my hands no longer an afterthought.

Someone once told me that explaining is an admission of failure.

I'm sure you remember, I was on the phone with you, sweetheart.

History repeats itself. Somebody says this.

History throws its shadow over the beginning, over the desktop,

over the sock drawer with its socks, its hidden letters.

History is a little man in a brown suit

trying to define a room he is outside of.

I know history. There are many names in history

but none of them are ours.

He had green eyes,

so I wanted to sleep with him

green eyes flicked with yellow, dried leaves on the surface of a pool--

You could drown in those eyes, I said.

The fact of his pulse,

the way he pulled his body in, out of shyness or shame or a desire

not to disturb the air around him.

Everyone could see the way his muscles worked,

his skin barely keeping him inside.

I wanted to take him home

and rough him up and get my hands inside him, drive my body into his

I wanted to be wanted and he was

very beautiful, kissed with his eyes closed, and only felt good while moving.

You could drown in those eyes, I said,

so it's summer, so it's suicide,

so we're helpless in sleep and struggling at the bottom of the pool.

It wasn't until we were well past the middle of it

the old dull pain, whose stitched wrists and clammy fingers,

far from being subverted,

had only slipped underneath us, freshly scrubbed.

Mirrors and shop windows returned our faces to us,

replete with tight lips and the eyes that remained eyes

and not the doorway we had hoped for.

His wounds healed, the skin a bit thicker that before,

scars like train tracks on his arms and on his body underneath his shirt.

as the road around us

but more frequently I was finding myself sleepless, and he was running out of

But damn if there isn't anything sexier

than a slender boy with a handgun,

a fast car, a bottle of pills.

Try explaining a life bundled with episodes of this--

on the first four knuckles.

We pull our boots on with both hands

but we can't punch ourselves awake and all I can do

is stand on the curb and say
Sorry

about the blood in your mouth. I wish it was mine.

I couldn't get the boy to kill me, but I wore his jacket for the longest time.

want them, so I take them back

the tomatoes are next to the whitewashed wall,

the book on the table is about Spain,

the windows are painted shut.

Tonight you're thinking of cities under crowns

of snow and I stare at you like I'm looking through a window,

You wanted happiness, I can't blame you for that,

you love this, tell me you're not miserable.

You do the math, you expect the trouble.

The seaside town. The electric fence.

Draw a circle with a piece of chalk. Imagine standing in a constant cone

A stone on the path means the tea's not ready,

a stone in the hand means somebody's angry, the stone inside you still

There is no way to make this story interesting.

A pause, a road, the taste of grave in the mouth. The rocks dig into my skin

or potatoes, or of a boat at night slamming into the docks again

without navigation, without consideration,

heedless of the plank of wood that are the dock,

that make up the berth itself.

I want to tell you this story without having to confess anything,

without having to say that I ran out into the street to prove something,

that he didn't love me,

that I wanted to be thrown over, possessed.

I want to tell you this story without having to be in it:

Max in the wrong clothes. Max at the party, drunk again.

Max in the kitchen, in refrigerator light, his hands around the neck of a beer.

Tell me were dead and I'll love you even more.

I'm surprised that I say it with feeling.

There's a thing in my stomach about this. A simple thing. The last rung.

Can you see them there, by the side of the road,

not moving, not wrestling,

making a circle out of the space between the circles? Can you see them

in an effort to make the minutes stop --

headlights shining in all directions, night spilling over them like

gasoline in all directions, and the dark blue over everything, and them

to prove something, that he chased after me

and threw me into the gravel.

And he knew it wasn't going to be okay, and he told me

it wasn't going to be okay.

And he wouldn't kiss me, but he covered my body with his body

and held me down until I promised not to run back out into the street again.

But the minutes don't stop. The prayer of going nowhere

His shoulder blots out the starts but the minutes don't stop. He covers my body

with his body but the minutes

don't stop. The smell of him mixed with creosote, exhaust --

There, on the ground, slipping through the minutes,

trying to notch them. Like taking the same picture over and over, the spaces

in between sealed up --

and change its music, setting the melody on its

words too small for any hope or promise, not really soothing

Litany in Which Certain Things Are Crossed Out

Every morning the maple leaves.

Every morning another chapter where the hero shifts

from one foot to the other. Every morning the same big

You will be alone always and then you will die.

something other than the desperation.

Dear So-and-So, I'm sorry I couldn't come to your party.

Dear So-and-So, I'm sorry I came to your party

and left you bruised and ruined, you poor sad thing.

Your want a better story. Who wouldn't?

A forest, then. Beautiful trees. And a lady singing.

Love on the water, love underwater, love, love
and so on.

What a sweet lady. Sing lady, sing! Of course, she wakes the dragon.

I can tell already you think I'm the dragon,

that would be so like me, but I'm not. I'm not the dragon.

I'm not the princess either.

Who am I? I'm just a writer. I write things down.

I walk through your dreams and invent the future. Sure,

I sink the boat of love, but that comes later. And yes, I swallow

glass, but that comes later.

And the part where I push you

I'm getting to it.

For a while I thought I was the dragon.

I guess I can tell you that now. And, for a while, I thought I was

cotton candy pink, sitting there in my room, in the tower of the castle,

young and beautiful and in love and waiting for you with