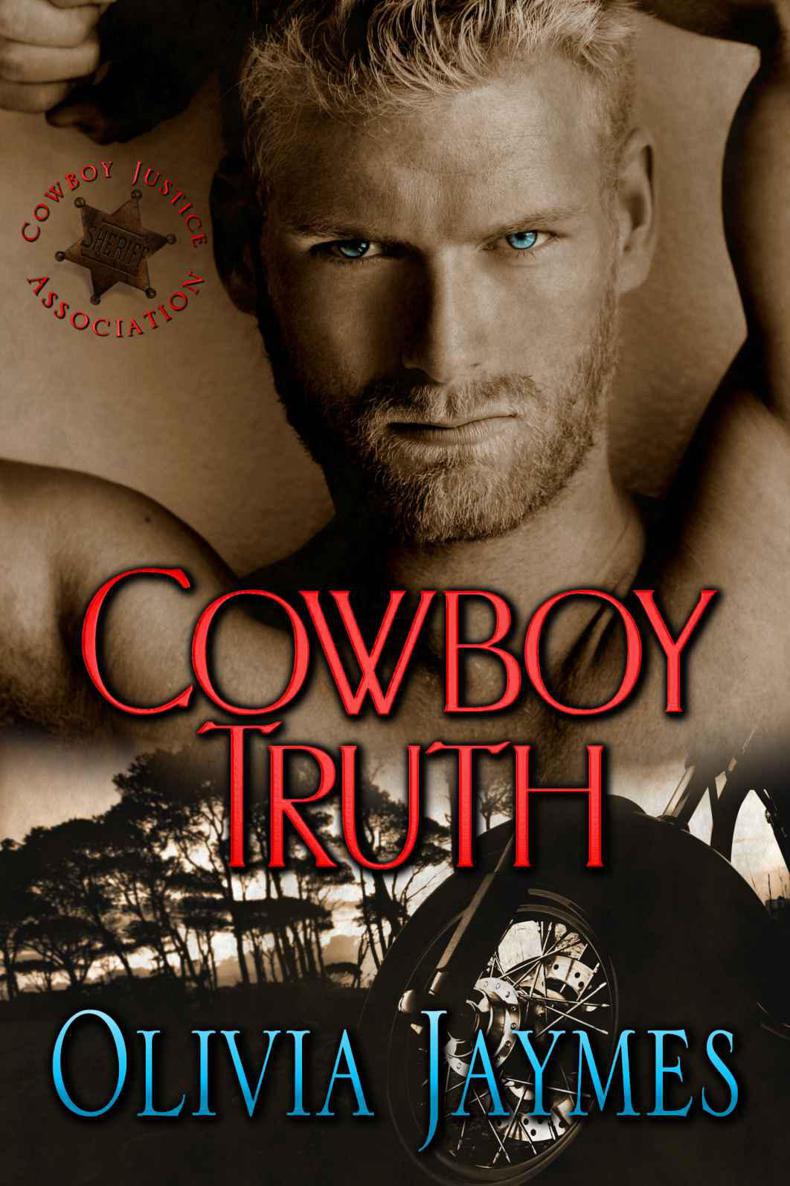 ALL RIGHTS RESERVED:
The unauthorized reproduction or distribution of this copyrighted work is illegal. Criminal copyright infringement is investigated by the FBI and is punishable by up to 5 years in federal prison and a fine of $250,000.

To all the good girls out there who like bad boys. This one’s for you.

S
heriff Logan Wright sat back in his chair, a smile playing on his lips, and let his gaze linger on the two generous curves struggling for escape from the tight blue dress. Charlene Decker’s cleavage was looking good tonight. She was wriggling on the dance floor, her boobs bouncing up and down against what was assuredly a complex structure of hooks, elastic, and wire. God bless the engineer that had designed that damn thing. He’d had his hands full.

Logan chuckled and took another draw from his beer. He’d had his own hands full of Charlene’s bounty on more than one occasion and had enjoyed it immensely. The way she was eyeing him tonight, he might be in for a repeat performance.

The wedding reception, held in a large tent on the grounds of the Bryson estate, was in full swing and it was a good night for a party. August was still warm, even in Montana, and everyone was in high spirits. The bride and groom were leading a line of people doing the “bunny hop” and Charlene was right in there with them. Logan was one of the groomsmen for his friend Lyle’s wedding, and while he loved Lyle like a brother, the last fucking thing Logan wanted to do was hop around a dance floor looking like a crazed clown jumping out of a jack in the box.

A man had to have some damn dignity in this world.

The bridesmaid Logan had been paired with during the wedding apparently felt the same. Ava Hayworth was sitting on the opposite side of the dance floor plucking at the petals of a flower in her bouquet of roses. She was alone at the table, and zealously avoided eye contact with any of the guests or staff. Unlike most women who were alone, she didn’t seem glum or sad. Instead, she had an air of peace and contentment around her as if the loud music and partying weren’t happening inches away.

“How come you aren’t out on the dance floor?” Wade Bryson, oldest brother of the groom and Logan’s best childhood friend, slid into the chair next to his. Wade’s face was flushed from either dancing or drink. Maybe a touch of both. “Charlene has her eye on you.”

Wade elbowed Logan and grinned widely. Wade loved Logan’s sex life more than Logan did. As a happily married man with three wild kids, Wade hadn’t had sex with anyone but Nancy since high school, so he lived vicariously through Logan.

He pointed the bottle toward the dance floor where everyone was now doing a passable rendition of the “chicken dance.” “I think I’ll pass. Poultry and rabbits are things I eat, not things I do to entertain the good citizens of Corville.”

It felt like the entire town was here tonight, the crush of bodies overwhelming to a man who liked his solitude. Logan knew every person’s name and of course they all knew him.

“Then go ask Ava to dance, will you? Mary paired her with you because she thought you’d be a gentleman and take care of her tonight. You don’t want the bride pissed at you, do you?”

No, Logan did not. Mary, Lyle’s bride, was okay in small doses, but had the temperament of a bubbling volcano made for the science fair. You never knew when it was going to erupt and spew all over everything and everyone. Logan had made a habit of staying out of her kill zone.

“I danced with her once.” He didn’t know why he was being such a dick about Ava tonight. She was a nice kid and easy to look at with her golden brown curls and hazel eyes. The pink dress she was wearing was a godawful mess of satin, lace, and ruffles, but she probably had a decent figure underneath it. She wasn’t glamorous, but she was cute and non-demanding. In fact, she’d abandoned him after the first dance, muttering something about checking on the bride.

“Once?” Wade scoffed. At that moment, he looked exactly like his father, real estate developer extraordinaire Bill Bryson. Hell, all three of the Bryson boys looked just like their daddy, dark hair and eyes. “Dance with her again. The DJ’s putting on a slow one.”

Logan sighed and set down the beer bottle. “Fine. She didn’t step all over my boots earlier. After this dance though, I’m out of here.”

Wade shook his head. “You can’t leave before they cut the cake and all that shit. You were in the wedding, man.”

For the dozenth time in the last week, Logan wished he hadn’t agreed to be a groomsman. Things like these had expectations, guidelines, and fuck it, rules. He wasn’t a huge fan of any of those things, preferring to navigate life with his instincts. Even as a cop Logan followed his gut, eschewing traditional police practices and regulations. So far it hadn’t let him down.

Standing up, he eyed the woman in question from a safe distance. It wasn’t that he didn’t want to dance with Ava. He liked her fine. She was, however, well educated. A college graduate of English or something like that. She wrote books for a living. Logan had scraped through high school by the skin of his teeth. He simply didn’t know what to talk to her about. Their one dance earlier had been awkward to say the least.

“Dance with her. Make sure she has a good time. If Mary thinks her sister isn’t having fun, heaven help us all.” Wade dashed off toward the main house without another word.

He walked across the dance floor, side stepping slowly swaying couples and came to a halt in front of Ava. She looked up at him with eyes wide as if she couldn’t believe he dared to cross over to her. Although he couldn’t remember a woman turning him down for anything from extra gravy on his mashed potatoes at the diner to rip-roaring, raunchy sex, this little miss just might refuse to dance with him. He opened his mouth to ask her but his sleeve was grabbed and tugged. He turned to see Charlene there – all hair, boobs, and teeth.

“C’mon, Logan.” Unfortunately, her voice didn’t match the outwardly sensual appearance. Her tone was high and girlish and always made Logan want to put something hard in her mouth to keep her quiet. “Come dance with me.”

“Not now, Charlene.” Logan gently extricated his elbow from her claw-like fingers with their long, red nails. “I’m dancing with Ava first.”

Charlene pouted, her lip gloss shiny under the cheesy disco ball hanging from the center of the tent. “I guess I can wait. You’re worth it.” She fluttered her eyelashes for effect, but Logan didn’t rise to the bait. It almost wasn’t fun chasing women anymore when they made it so damn easy.

Logan turned back to Ava and she was already shaking her head. “Go ahead with Charlene. I’m fine here.”

“No, let’s dance.” Logan eyed the stubborn miss. Her chin was lifted and there were green sparks of rebellion in her eyes. “I’ll dance with Charlene afterward.”

Charlene hovered a few feet away watching the byplay with interest. Nothing this town loved more than some juicy gossip. Logan getting his ass handed to him by a little bit of a thing would be news indeed. He had to admit she piqued his interest. He wasn’t used to women ignoring him.

Ava bit into her full lower lip and shook her head again. “No, go ahead. Really, it’s okay.”

Logan sighed and leaned forward, his hand resting on the arm of her chair, their faces inches from one another. From this position, he could see her shocked expression and smell the floral fragrance of her perfume. It was a soft, pleasant aroma that wrapped around him, reminding him of the Montana prairie in the spring.

“I don’t want your sister pissed at me. Dance.” He kept his voice soft but unyielding.

Shock gave way to amusement and she smiled, dimples appearing in her cheeks. “Hurricane Mary is on your case, huh? I’ll take pity on you, Sheriff. But watch those big cowboy boots.”

He bit back his usual rejoinder about how his big boots matched another part of his anatomy. He wasn’t looking to get Miss Goody Two-Shoes between the sheets tonight. She was the original good girl. Everyone knew that. Ava was the kind of girl who went to church socials, volunteered for the elderly, and sure as shit wore white cotton panties underneath that pink nightmare of a dress.

He placed his hand under her elbow and led her onto the small dance floor. The lights were low and he pulled her into his arms as another slow song started up. They moved slowly to the baleful strains, and Logan searched his mind for small talk.

“I read your last book,” he heard himself saying. “I liked it.”

She looked up, craning her head back. She was a tiny thing, barely up to his shoulder. Her face was wreathed in an honest-to-god genuine smile. It made his stomach do funny things and he immediately, ruthlessly, pushed the feeling away. “Really? Logan, that’s so sweet. I didn’t even know you read my books.”

Now why the fuck did he admit that? It made him sound like some pathetic stalker fan or something. He simply liked to read in the winter when it was too fucking cold to do anything else.

“I’m so glad.” Her voice was soft but sure. “I’m researching a new one, actually.”

“Another murder mystery?” It was easy to talk to her about her writing. She was totally animated at the moment.

“Yes,” she nodded eagerly. “A grisly one, of course. Melissa and Mark will really have to work to figure this one out.”

B000FCJYE6 EBOK by Hornbacher, Marya
The Losing Role by Steve Anderson
The Mine by Heldt, John A.
No Time for Goodbyes by Andaleeb Wajid
Last December by Matt Beam
Taking the Fall by Monday, Laney
Ghosts on the Coast of Maine by Carol Schulte
The Truth War by John MacArthur
My Funny Valentina by Curry, Kelly
Clarity's Doom (Ancient Origins Book 1) by C.L. Scholey