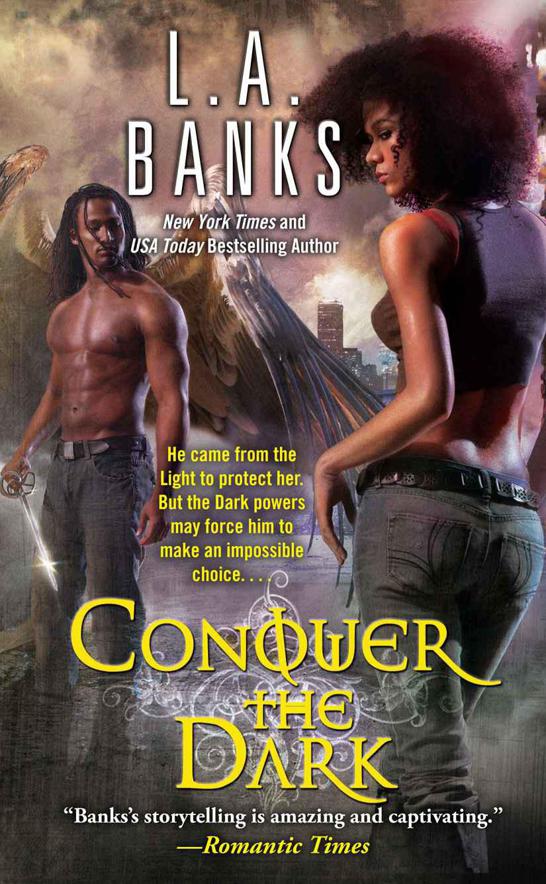 Thank you for purchasing this Simon & Schuster eBook.

Sign up for our newsletter and receive special offers, access to bonus content, and info on the latest new releases and other great eBooks from Pocket Books.

“Über-talented Banks has taken her gutsy and steadfast heroine through enormous challenges that have kept her legion of fans on the edge of their seats.”

“Fasten your seat belt and enjoy a ride littered with holy water, vamp ooze, and a layered web of political intrigue ingeniously woven from the mind of Banks.”

“A terrifying roller-coaster ride of a book.”

“Arguably superior to the Buffy franchise … Wildly creative and invents a totally new and refreshing milieu.”

“Banks spins a head-bendingly complex tale of passion, mythology, war and love that lasts till the grave—and beyond.”

All rights reserved, including the right to reproduce this book or portions thereof in any form whatsoever. For information address Pocket Books Subsidiary Rights Department, 1230 Avenue of the Americas, New York, NY 10020.

POCKET and colophon are registered trademarks of Simon & Schuster, Inc.

Leslie Esdaile Banks, beloved mother, daughter, and friend.
We were blessed to know her, and will miss her dearly. She loved
her devoted fans and wrote for them with all of her heart.

C
eleste Jackson opened her
eyes in bed and stared across the large warehouse loft. This was her favorite time of the day, when a new dawn blotted out the last vestiges of the night and the angels spread their wings.

No matter how often she’d seen it done, each time Azrael opened his, she stared at his back in awe, watching the thick ropes of muscles that gave it form and substance unfurl pristine white appendages from beneath his mahogany-hued skin. It took everything within her not to gasp as the steel-cabled sinew that flanked his spine bulged and stretched just before a seam developed along his shoulder blades, then instantly gave birth to glistening feathered beauty.

He stood in front of the massive warehouse windows naked from the waist up and wearing only white cotton karate pants with his magnificent twelve-foot wingspan
outstretched. Soon, the dance would begin, his silent communion with motion and gravity and some force she could not see. And she waited.

After a moment he turned with his eyes still closed, barely breathing, it seemed, the new day washing his handsome face in rose-golden light, his long, dark dreadlocks spilling over his broad shoulders and his stone-cut chest. Every stacked brick of his abdomen cast shadows between them only to give rise to the wide planes of muscles that almost appeared to absorb the light.

Celeste allowed her gaze to travel over his corporeal form. He was definitely a divine creation … and that he was hers still blew her mind even three months after he’d found and bonded with her. She briefly closed her eyes and said a quiet prayer of thanks, also glad that his being with her violated no heavenly edicts. He loved her, just as she loved him … and she wasn’t pure human. Therein lay the technicality that kept him from being banished when their bonding went from platonic to unstoppable passion—or “joining,” as he called it.

Not touching him was impossible, especially when he was literally addicted to her energy now … and addicted to her skin. Their joining caused a fusion that increased her gifts and increased his power here on this plane. She was his battery; he was her jumper cable. Each Remnant found by her warrior angel was a balance tipper from the dark to the Light on the planet. The time had come for each brother to find the one he sought, for the end of days was nigh … and here in this density, each warrior needed that battery, needed that spark of fused energy from his Remnant as an added advantage. That bond brought pairs
together in inseparable passion … they had discovered it was simply unavoidable.

Azrael had found his Remnant, Celeste; two of his brothers had found their Remnant mates in the months following the battle in Philadelphia. Bath Kol had Aziza with him, and although not a Remnant, she was no less a dear part to the group. Now those women were like the sisters Celeste had never had, and she was grateful for the wonderful addition to her life. Three women, like her, who now knew what it was to be swept up in a maelstrom of altered reality. That made for a close-knit sorority that had bonded over fear, war, tragedy, triumph, and divine intervention—and dished about it all. Celeste released a quiet sigh of pure contentment; she was blessed.

If only things could go on this way with her man, her angel, peaceful and happy, his brothers sated and relaxed, their partners the first real female friends she’d ever known. The warehouse was a sanctuary on the banks of the Delaware River in Philly. But she knew that the clock was ticking. Learning to live in the moment was the only way to mentally survive. Maybe that was how Az made sense of it all, too? Being immortal had to have given him a philosophical perspective.

Rather than dwell on what couldn’t last forever, she tucked away any unpleasant thoughts and watched Azrael work through his methodical tai chi dance.

Deep in meditative prayer, serenity wafted from his very being as he opened his arms and slowly bent his knees, beginning his morning ritual. She could literally see the energy move through him in a thin, blue-white charge that began to cover his skin as his entire body became
engaged in the graceful, ancient choreography. As if witnessing a celestial fan dance in which his majestic wings lifted and dusted the floor, creating music in the pauses and breaths and sweeps, she watched in abject reverence.

It was all so beautiful that emotion tightened her throat. She was supposed to be dead by now. Azrael had found her on the night she’d seen a demon take her exboyfriend’s life, and she’d been hell-bent on also taking her own.

But with a touch, Azrael had pulled the drugs and alcohol out of her system. With patience he’d convinced her to stop running from him and that she hadn’t had a psychotic break, hadn’t lost her mind. Then he’d shown her that angels and demons truly existed and took her on the most hair-raising journey of her life.

Time was relative. Three short months ago she’d met an angel and everything she thought she knew about the so-called normal world had been shattered in an instant. Three short weeks ago she’d lost the last living relative that she cared about—her aunt Niecey—and yet because of Azrael, she’d been at peace about that. Now that she knew there was actually another side and that what she’d heard all her life hadn’t been theoretical, it was easier to accept many of the losses, even the hard ones such as her mother and Aunt Niecey.

An Invitation to Scandal by Kelly Boyce
RoamWild by Valerie Herme´
The Birthday Scandal by Leigh Michaels
Pleasure by Adrianna Dane
Clang by E. Davies
The Hidden by Bill Pronzini
Finding Sadie (Los Rancheros #0.5) by Brandace Morrow
Split at the Seams by Yolanda Sfetsos
Control by Ali Parker
20 Takedown Twenty by Janet Evanovich