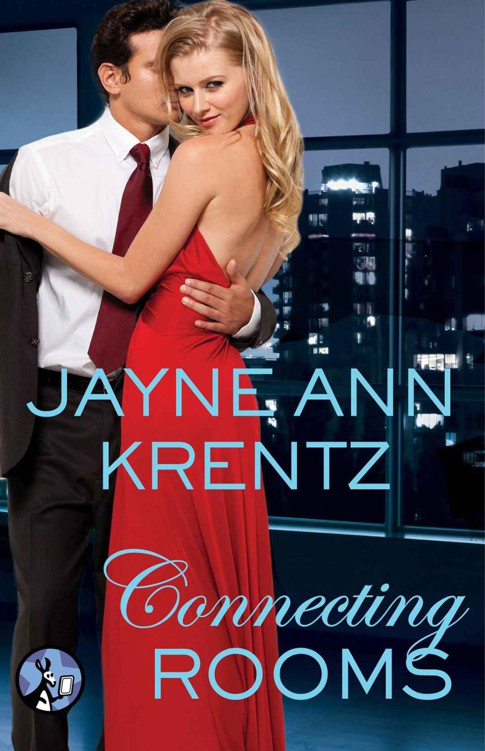 Thank you for downloading this Pocket Star Books eBook.

No one ever said that the devil couldn’t have a rose garden, Amy Comfort thought. It just seemed a trifle out of character. On the other hand, the rose garden of the old Draycott place was no ordinary one. And Owen Sweet, Amy had decided, was no ordinary gardener.

“Are you, or are you not, a private investigator?” Amy demanded.

“Depends,” Owen Sweet answered. With the lethal precision of a fencer, he used a pair of garden shears on a clotted mass of evil-looking vines.

“What does it depend on?”

“On whether or not I feel like working at it.” Owen took hold of the severed vines with heavily gloved hands. He ripped the old vegetation away from the window with a single, powerful motion. “I’m a little busy at the moment.”

Owen took no notice of her sarcasm. He seized another tangle of vines and dispatched them with ease.

The vegetation he was attacking with such diligence had grown so thickly over the windows of the old house that it had effectively blocked all sunlight from reaching some of the rooms.

Not that sunlight was a common commodity here on Misplaced Island, Amy thought. The forgotten little patch of land located off the coast of Washington sat squarely in the middle of a rain shadow. A perpetual mist shrouded the island on good days. Dense rain poured down the rest of the time.

The local joke was that the island had earned its name when its original discoverer had temporarily misplaced it in the fog. Whatever the truth of that story, there was no doubt but that one had to be determined to find Misplaced Island.

And, Amy thought, one had to have either a powerful motivation or an extremely odd sense of whimsy to make one’s home here. She wondered which of those two possibilities applied to Owen Sweet.

“Owen, this garden went wild years ago, just like the house.” Amy was growing increasingly exasperated. Time was running out, and she needed Owen Sweet. “It can wait a few more days before you tame it.”

Owen paused briefly to look at her. His sea-green eyes gleamed in the misty gray light. “I’m in the mood to do it now.”

Sweet
was definitely a misnomer, Amy reflected, not for the first time. As far as she had been able to discern, Owen was anything but sweet, in either nature or temperament. She suspected he was yet another result of a baby having been switched at birth. Happened all the time, they said. Amy wondered what Sweet’s parents had thought when they discovered that they had been given a little green-eyed, black-haired demon to raise.

He was proving to be stubborn and thoroughly irritating, but there was something about the man that fascinated Amy. She did not know him very well, even though she had sold him the Draycott place. No one on the island really knew Owen Sweet.

He had moved to Misplaced Island two months ago. Amy had met him when he walked into the real estate office she operated out of the parlor of her cliffside cottage. She had been stunned by her reaction to him. Hunger and longing and a singing sense of joyous discovery barely began to describe it.

She had tried to squelch the feelings. True, she was a struggling romance novelist on the side, but Amy was far too pragmatic to believe in love at first sight. On the other hand, she trusted her own instincts when it came to people. They had stood her in good stead in the real estate business, and she saw no reason to discount them when dealing with members of the opposite sex. One thing was for certain. Those instincts had never reacted with such overwhelming intensity to any of the handful of men she had dated.

Owen had appeared oblivious of her carefully concealed response to him. He had announced without preamble that he’d already toured the island on his own and had checked out the available properties. He had decided to buy the Draycott place.

Amy had been horrified. Everyone on the island knew that the old Draycott house, a Victorian monstrosity, was a disaster from foundation to roof. She had dutifully done her best to steer Owen toward other real estate opportunities, but he had refused to listen to her advice. In the end a sale was a sale. Amy had reluctantly written up the deal.

The only good part about the transaction, she had told herself, was that Misplaced Island was a very small community. She would see Owen Sweet again. She could only hope it wouldn’t be in the course of a lawsuit over the Draycott sale. Some buyers tended to blame the real estate agent when they discovered they had made a bad bargain.

But Owen had appeared to be content with his new home when, to her secret delight, Amy had begun to encounter him with increasing regularity at the post office, in the checkout line at the island’s only grocery store, and at the tiny bookshop. One of the few facts that she had gleaned concerning him was that he was a voracious reader. At the rate he ordered books from Mrs. Akers, the owner of the bookshop, he would single-handedly keep her small store in the black during the coming winter.

But last week had been the real turning point. After running into her at the post
office, Owen had invited Amy to join him for a cup of coffee at the town’s one and only café. The conversation had concerned such riveting matters as the weather, the latest novels they had each read, and the limited ferry schedule. Amy had walked on air all the way back to her cottage. Hope had bloomed within her.

She stifled a small, wistful sigh as she watched Owen free another window from its shroud of clinging vines. There was a lean, supple strength about him that captivated her senses. While it was true that, objectively speaking, Owen’s grim features could have been created by someone who would have been equally adept at designing junkyard dogs, Amy found him strangely compelling. Which probably said far too much about the limited social life on Misplaced Island, she told herself.

Then again, she had not even been aware of a lack of a social life until Owen had arrived.

She watched him now with brooding determination. This was the first time she had paid a call on Owen Sweet since he had moved into his crumbling abode. She had come on business, not for social reasons. She needed this man. She needed him badly.

It wasn’t as if she had a lot of choice. The small sign on the front door of the old Victorian ruin Owen called home said it all. It read
SWEET INVESTIGATIONS
.

Owen Sweet was the only private investigator on Misplaced Island. There was not a lot of call for his type of work in the small community. Amy was quite certain that since his arrival he had yet to get a single case. She had naively believed that he would be thrilled to have work. Obviously, she had been mistaken.

Amy braced one hand against the garden’s stone wall and drummed her fingers with simmering impatience. Unaware or uncaring of her irritation, Owen Sweet went about his work among the grotesquely tangled rosebushes that clogged the garden.

The roses had been abandoned along with the crumbling ruin of a house years ago. Instead of dying off in a bittersweet, genteel manner, they had gone wild, with a vengeance. They climbed the garden walls as though bent on escaping a prison. They formed impenetrable thickets across the cracked paths, choked the empty fishpond, and had apparently been intent on marching up the steps and into the sun porch. Owen Sweet had arrived in the nick of time.

“Can I take it from your attitude that you are not interested in working for me?” Amy asked bluntly.

“Yeah.” Sleek muscles moved easily beneath Owen’s black T-shirt as he shifted an armload of defeated vines to a growing pile in the center of the garden. “You can draw that conclusion.”

“Very well, then, you leave me no choice.” Amy removed her hand from the stone wall and straightened in resignation. “I shall have to find someone else.”

Owen’s mouth curved slightly. “Good luck. The last time I looked in the phone book, I was the only PI on the island.”

Amy brushed her hands together and started toward the sagging gate. “I had hoped to give my business to someone local because I believe in supporting the local economy. But since you’re not interested, I’m sure I can find someone in Seattle who will be happy to take my money.”

Amy was aware that Owen had gone very still behind her. She did not turn around. “If I hurry, I can catch the afternoon ferry.”

“Damn. Hold on just a minute.”

Satisfaction surged through Amy. She had been in real estate long enough to
sense when a buyer had undergone a quick change of heart. She paused at the gate to smile at Owen with polite inquiry.

“Was there something you wanted, Owen?”

He scowled ferociously, an expression that did nothing to soften his harsh face. “Yeah. Some answers.”

“Sorry, I don’t have time to chat. The ferry leaves in a couple of hours and I haven’t finished packing.”

“Let’s get real here.” Owen stripped off his gloves as he strode toward her along the garden walk. “What does a woman like you need with a private investigator?”

“No offense, Amy, but you’re hardly the type to have the sort of problems that require the services of someone in my line of work.”

“What would you know about my problems?”

Owen came to a halt in front of her and planted his fists on his hips. “You’re not exactly a mystery woman. You’ve been living on Misplaced Island for nearly a year. During that time you’ve opened a real estate agency and published a romance novel. Before you came here, you worked the condominium market in Seattle. You aren’t exactly rich, but you did all right in your own real estate investments.”

Amy was taken aback. “Good grief. How did you—”

“Everyone on the island seems very fond of you,” Owen continued ruthlessly. “I seriously doubt that you have any enemies around these parts. You are thirty years old and have never been married. You do not flirt with married men, so the local women have no reason to dislike you. You are not dating anyone at present, so you have no reason to employ an investigator to tail an errant boyfriend.”

Amy gazed at him with mingled anger and amazement. “Are you quite finished?”

“No, not quite. You appear to live like a cloistered nun, Ms. Comfort. Therefore, I find it difficult to believe that you have got yourself into a situation that requires an investigator.”

“You seem to have done a fairly thorough job investigating me. May I ask why?”