Read Collision 2012: Obama vs. Romney and the Future of Elections in America Online

Collision 2012: Obama vs. Romney and the Future of Elections in America 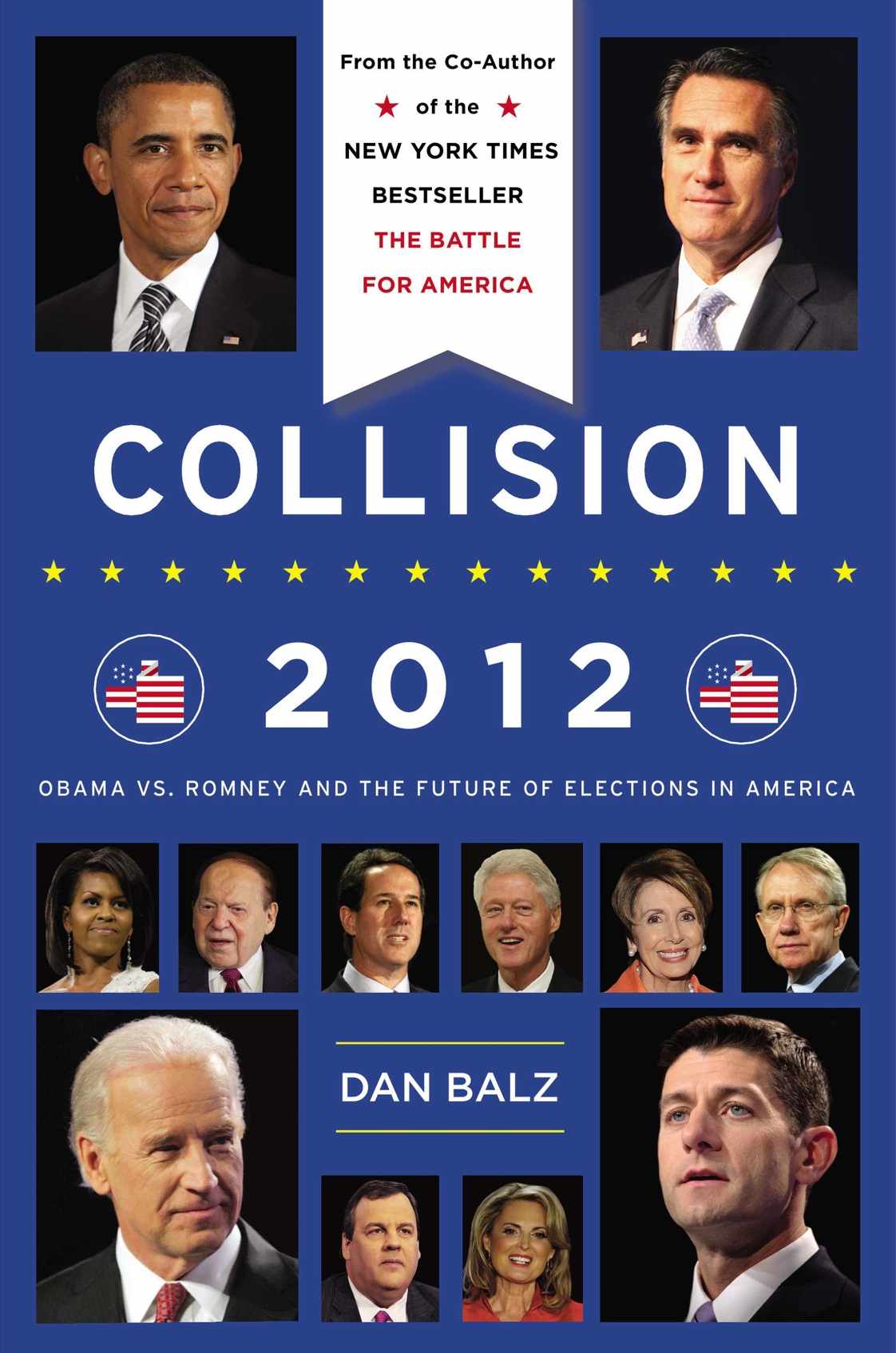 Storming the Gates: Protest Politics and the Republican Revival
(with Ronald Brownstein)

The Battle for America 2008: The Story of an Extraordinary Election
(with Haynes Johnson)

For more information about the Penguin Group visit penguin.com

All rights reserved. No part of this book may be reproduced, scanned, or distributed in any printed or electronic form without permission. Please do not participate in or encourage piracy of copyrighted materials in violation of the author’s rights. Purchase only authorized editions.

While the author has made every effort to provide accurate telephone numbers, Internet addresses, and other contact information at the time of publication, neither the publisher nor the author assumes any responsibility for errors, or for changes that occur after publication. Further, the publisher does not have any control over and does not assume any responsibility for author or third-party Web sites or their content.

who set the standards

And again, to Nancy,

for love and friendship,

There is a New America every morning when we wake up. It is upon us whether we will it or not.

BOOK ONE: THE PIVOT

4.   Message for the Middle Class

22.   Bill Clinton and the Empty Chair

Epilogue: Into the Future

This book is a sequel to one I coauthored with Haynes Johnson about the 2008 election. That campaign was historic in many ways, and as I began this project it seemed unlikely that 2012 could deliver a story as rich or compelling as that one. As it turned out, 2012
was
different from 2008 but in its own way just as compelling. The election of 2008 was the story of Barack Obama, the rise of what Johnson and I called “the most unlikely presidential prospect in all of American history.” The election of 2012 was a sprawling story about a divided America, the unusual cast of characters who sought to lead the country, and the underlying forces that helped determine the outcome. It was not an uplifting campaign by any stretch of the imagination. At times the plain nuttiness of it all cried out for Hunter S. Thompson to chronicle it. But both as political theater and as a window into the struggle between where America has been and where it may be going, it was as engaging as it was instructive about the state of our politics.

This book is based on several hundred interviews that were done over a period of two years. The interviewees included candidates, strategists in and outside the campaigns, citizens, and scholars. Most of the interviews were done on the record, although some of those were embargoed until publication of the book. Others were done with the agreement that the interviewee not be identified. The book is also grounded in my daily reporting and writing for the
Washington Post
during the course of the campaign. A few passages in the book are drawn directly from that work with the
Post
’s permission.

In so many ways, Campaign 2012 was a departure from what had come before. The basic architecture wasn’t that different. For example, the calendar hadn’t changed much from years past and still dictated the pace of the action and the movement of the candidates. But candidates were operating in a new environment. More money was spent than ever before. Super PACs taking unlimited contributions became a force. Polls proliferated unlike in any previous campaign. Debates played a more central role than ever. Social media, led by Twitter and Facebook, changed the way campaigns and the media did business. For the candidates, maintaining control of their campaigns in the face of these fast-moving forces was even more of a challenge in 2012 than it had been in earlier elections.

Campaign 2012 was one in which the best of campaign tactics and strategies collided with the immutable forces that do as much to affect the outcome as anything candidates and their advisers may do or say. Economic cycles, demographic shifts, and the hardening of partisan lines shaped this campaign from start to finish. It was almost as if there were two campaigns playing out at once—the campaign on the surface that captured headlines and drove the commentary, and the subterranean campaign that was little seen but ever powerful.

Keeping track of all this tested the best of strategists, analysts, reporters, and political scientists. It was a campaign about big things but one often fought out in small ways. If 2008 was inspiring, 2012 was often negative and nasty—big stakes but not always a campaign to do them justice. By the time it ended, most Americans were ready to say good riddance. And yet from start to finish, it was an extraordinary story about a nation divided in search of its future.

T
he presidential campaign year is set to open in less than a month and President Obama has come to Osawatomie, Kansas. It has been a long year for the president—endless (and fruitless) budget battles with the Republicans in Congress, unexpected political setbacks that left him in a funk, and, worst of all, a stubborn economy that has not responded well to his policies. Unemployment stands at 8.6 percent. By numbers political strategists watch closely, he is as vulnerable as any president seeking reelection in two decades. His presidency, which began with themes of hope and change, is at risk.

He is no longer the bright and shining politician who captivated the nation four years earlier. The once aspirational candidate of 2008 is now scarred by his battles with a militant and hard-right Republican opposition that has decided to no longer play by the old rules. His presidency has left the country even more deeply polarized than it was under George W. Bush. Many voters recognize the obstacles that Republicans have put in his path, and yet they wonder why this president, who offered so much promise, has not found a way to make the system work. No one is quite sure who he is or what he really wants to fight for.

The president needs a fresh start and a sharper edge. He needs a new way to set the terms for the coming reelection campaign. He has come to Osawatomie because it was where a century earlier President Theodore Roosevelt delivered his famous “New Nationalism” speech. In this same small town, Roosevelt argued that a strong federal government was necessary to protect ordinary citizens from the destructive power of big corporations.

Obama carries with him the text of a speech that seeks to build on the foundation laid by that trust-busting Republican president. He wants to frame the choice for the 2012 election as one of the biggest in a generation, a collision between competing philosophies about the economy, the role of government, and the well-being of the struggling middle class. He talks about income
inequality and says, “This is a make-or-break moment for the middle class and all those who are fighting to get into the middle class.” Of the Republican approach he says this: “It doesn’t work. It’s never worked.”

This Obama is different from the one the country has seen, the assertive progressive many of his followers have been looking for. He has set the terms of the campaign on populist themes, drawing the starkest of contrasts with the Republicans who have countered his every move for three years. He has found the ground on which to run. The day marks the real opening of what will be a high-stakes reelection campaign.

M
itt Romney is in Boca Raton, Florida. It has been a month since he freed himself—finally—from a long and destructive battle for the Republican nomination. The last of his rivals has been vanquished, the last in a string of candidates who rose unexpectedly, one after another, to challenge him for a nomination that seemed from the beginning almost within his grasp. In winning, he demonstrated that he understands many of the new rules of presidential politics, especially the importance and power of money. He has shown resilience and ruthlessness, qualities that any challenger to a sitting president will need.

But the primary campaign has left nagging questions about Romney. Inside his party there is still a noticeable lack of enthusiasm for the candidate. Obama, not their nominee, is the great unifier among Republicans. The former governor also is not very well known throughout the country, despite having run for the nomination in 2008 and having been in the public eye now for more than a year as he sought that prize for a second time. On the positive side of the ledger, he is seen as a devoted family man with a record of success in private business. On the negative side, he is seen as someone of such wealth and seeming privilege as to be a distant figure with whom voters cannot identify personally.

Romney is banking his hopes of becoming president on the pervasive disappointment that so many Americans feel about the economy. His campaign is grounded in this idea: that no matter how much people may like Barack Obama personally, they find him lacking as a leader. Romney has described the president as someone who doesn’t understand how the economy works, whose policies are the antithesis of what is needed to get the engines of growth roaring again, and who is simply in over his head as a leader in a capital poisoned by partisanship. All that may be sound thinking, but only if the public warms up to him.

He has come to Boca Raton to the home of Marc Leder, a private equity
manager with a flamboyant reputation. He has come to raise money, which he desperately needs to replenish his campaign after the long nomination battle. About 150 people have paid $50,000 apiece to join the candidate for the evening, and as is customary he takes questions from the audience. Someone points out that more and more people have been told that government will take care of them. How can Romney persuade them to take care of themselves?

Inexplicably, Romney takes aim at the 47 percent of the country he says will never vote for him, who are in Obama’s column already. They act like victims, he says. They believe they are entitled to government assistance. As part of his rambling response, he says, “My job is not to worry about those people. I’ll never convince them that they should take personal responsibility and care for their lives.” In one answer, Romney manages to reinforce all the stereotypes he has been fighting to overcome and sets out a worldview that sounds like the opposite of his opponent’s.

Of course, it’s all off the record, or so he believes. Off to the side of the room, unbeknownst to the candidate or his advisers, a small video camera is recording Romney’s words, a political time bomb waiting to explode.

Blossoms and the Green Phantom by Betsy Byars
A Summer Vacation: A Wife-Swapping Novella by Arnica Butler
Athena Lee Chronicles 0: The Lost Pilot by T. S. Paul
Worlds of Ink and Shadow by Lena Coakley
In Fond Remembrance of Me by Howard Norman
Mysteries of Motion by Hortense Calisher
2008 - The Consequences of Love. by Sulaiman Addonia, Prefers to remain anonymous
A Way (The Voyagers Book 1) by Tara Lutz
Dead Flesh: Stories of the Living Dead by Hilden, Josh
A Dream for Addie by Gail Rock