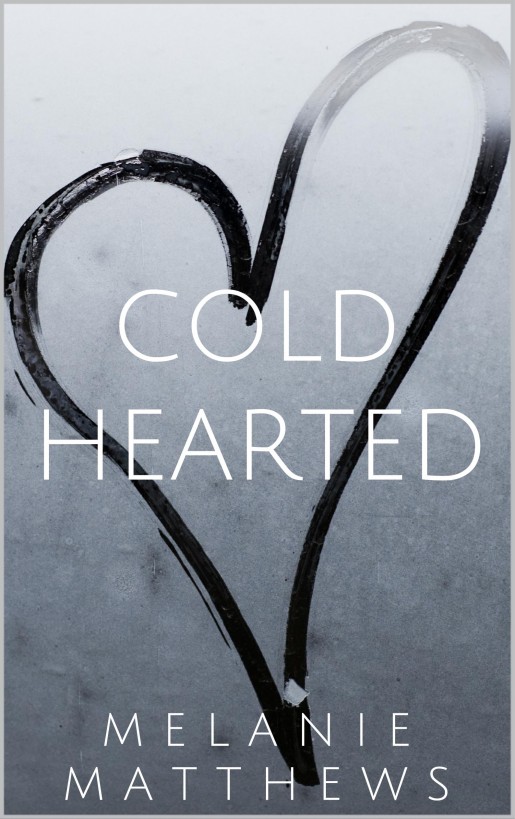 Thank you for downloading this ebook. This book
remains the copyrighted property of the author, and may not be
redistributed to others for commercial or non-commercial purposes.
If you enjoyed this book, please encourage your friends to download
their own copy from their favorite authorized retailer. Thank you
for your support.

Coldhearted is a work of fiction.

Any references to historical events, real people, or
real places are used fictitiously. Other names, characters, places,
and events are products of the author's imagination, and any
resemblance to actual events or places or persons, living or dead,
is entirely coincidental.

When Edie St. John entered Lockhart Manor in the cold
town of Grimsby, she didn’t expect to be imprisoned by a malevolent
ghost. Tristan Lockhart decided to let her go, but not before
attaching himself to her. Free to haunt Grimsby, Tristan is causing
fear wherever Edie goes, hateful of everyone, and jealous of Mason
Fenwick, whom Edie loves. Can Edie find a way to rid herself of
Tristan and have a normal life with Mason? Or is she doomed to
forever suffer from Tristan’s cold, dark heart?

Edie was lost and freezing cold.

Grimsby, the wintry town she’d recently moved
to was blanketed in snow, as if it’d been cursed by the White Witch
of Narnia.

Shivering, she wrapped her arms around her
chest. Edie, being a southern girl, wasn’t used to the cold. She
was bundled up more than a NASA astronaut out on a spacewalk.

And she was still freezing.

She’d stopped her car to ask for directions.
Now she was standing before an old but fancy-looking mansion named
Lockhart Manor from the iron-lettering arranged in a semicircle on
a bricked-archway entrance. At first glance, the mansion had seemed
abandoned, but then Edie had seen a figure walk past a window,
before a light had been turned off.

Who could possibly live in such a desolate
location?

She took in the rest of the grounds. Vast,
thick woods surrounded the property. There was no green here,
wintertime, when everything was dead. Come springtime, the earth
would be revived, full of life.

Not Edie’s parents, though. They were dead
and gone. And a change of the seasons couldn’t bring them back.

To Edie, the leafless, snow-blanketed trees
acknowledged this, as they stood there, proud and tall, daring her
to challenge them. They scared her with their limbs like skinny
arms, reaching out to snatch her up. She was reminded of the scene
with Dorothy and the deceptively-inanimate trees on the
yellow-bricked road, and wondered if there really was a witch
about.

Desperate for salvation, Edie forced her
mouth open, to call out, but she couldn’t form the words, and only
saw her breath escape into a misty white trail; it moved on its
own, traveling with speed and purpose toward the front door of the
house.

Edie wondered if this was a sign. Should she
knock?

Yes, she decided quickly, and reached up to
grab the knocker, when at the same time, she heard someone crying.
Her hand froze and she stood still, listening. The crying, no, the
wailing, continued. It was coming from the woods. She thought it
must be the wind, stirring and whistling through the trees.
Yet…there was no wind. No natural phenomena to explain what she was
hearing.

She lowered her hand. The wailing stopped and
silence reigned. She shook her head, thinking she’d just imagined
it all. Yeah, that was it. The place looked scary, so her mind had
played a trick on her.

She lifted her hand and grabbed the
knocker.

“
Don’t,” someone whispered
in her ear.

The voice sounded like a girl, but when Edie
turned to find her, she was nowhere to be found.

Scared, Edie knocked and yelled, “Is anyone
home?! Please?! Let me in! I’m lost!”

Edie knew someone was home. She’d seen
someone moving.

“
Don’t!” the girl whispered
again, more urgent than before.

Oh, the hell with it! She’d just be late to
school. She was dreading going there anyway. Maybe she’d go back to
Uncle Landon’s house. No. It was her house, her home.

As she was turning to walk away, she heard
the front door creak open. She pivoted back around, and curious,
she focused her eyes, peering into the darkness.

No one answered. The house was deadly
silent.

She should’ve fled then, but she didn’t,
feeling compelled to move forward by forces she couldn’t
understand. So she stepped over the threshold, took off her glove,
and felt around for a light switch. Her fingers swept something
sticky and she jerked her hand back.

Outside, in the morning light, she
scrutinized her palm; icky, spider webs covered it.

Don’t be afraid. You can do this.

Her cheers worked. She wiped her palm against
her jeans, and then felt around again for the switch. She found it
and flipped it on—nothing. She flipped it back and forth—nothing,
again. There was no electricity. But…what about that light she’d
seen? It’d been too luminous for a single candle.

She moved forward in the dark, in the
silence, and then suddenly, she heard a buzzing noise like a hive
of bees. She took a step back, ready to flee, thinking she was
about to get stung. As soon as she took another step, the buzzing
noise stopped. Just as she was about to relax, a loud pop caused
her to jump, followed by a bright, yellow flash that almost blinded
her.

She tossed up her hand to protect what little
vision she had left. After a few seconds, she dared to lower her
hand. She blinked, regained clarity, and focused her eyes. She
realized that she was standing in the foyer of Lockhart Manor,
below a glowing chandelier consumed by spider webs, and she
assumed, creepy crawlies.

So then, I’m not going
crazy.
The place was lit, once again.
Now…what about that person she’d seen?

In response, she heard a floorboard creak,
and then from the gloom, a deep, smooth voice said, “Come in. I’ll
help you find your way.”

Her teeth were chattering. She felt colder
than she’d ever felt before, and she had a horrible, horrible
feeling it had nothing to do with the weather. So when she backed
up to leave and turned toward the exit, she wasn’t surprised to
discover the front door had closed—on its own—and locked her inside
with no mechanism to free herself.

She tried her cell phone to call for help,
but the black screen was unresponsive, frozen dead.

Frightfully, she wondered if she was
next.

Edie grasped the pendant resting beside her
frantically-beating heart.

It’d been a birthday gift,
her seventeenth. The chain was gold, as well as the heart-shaped
pendant with encrusted rubies that spelled the word
Love
in cursive script
along the surface.

She safeguarded it in her hand, as if it were
magical; an object of power to set her free from this scary place,
and the scary-sounding man in the dark.

With her free hand, she tried the door handle
again. No use. She was a prisoner.

Another floorboard creaked. The man was
moving toward her.

She let go of her necklace. She couldn’t very
well run and hold it at the same time. She knew that the front door
wasn’t the only door, so she took off running around the first
floor of the house like a madwoman, trying to find another exit,
but every door she came to was locked.

Out of breath from lack of exercise, she
stopped, doubled over, and rested her hands on her knees, panting.
She could see her breath escaping. The lights may be on, but not
the heat.

She didn’t hear anyone moving or talking, so
she willed her heart to return to its normal rhythm and took in her
surroundings. She was in what appeared to be a sitting room. No
television. No computer. There was a phone, but it was an old-timey
rotary.

She checked for a dial tone; the line was
dead. No surprise there.

The furniture, although caked in dust, was
expensive-looking—mahogany or walnut. Dulled paintings adorned the
walls—scenes of wide green fields; cottages; seashores. No
portraits. A tapestry of Psalm 23 hung on the wall, as well; it was
faded and torn, slowly rotting away. She imagined the house must
have been very beautiful once, before time and neglect had worn it
down to ugliness.

Who were the Lockharts? And why had they
abandoned their home?

She checked her cell phone again on the
chance that maybe it’d decided to be nice and work. Nope. It was
still mean and dead.

She grasped the heart-shaped pendant again.
She’d first worn it three weeks ago on her birthday. And she’d worn
it still, when on the next day, she’d been informed her parents had
died in a car accident. A careless driver not paying attention had
hit them.

And so three days ago, she’d arrived in
Grimsby to live with her uncle, the famous horror writer, Landon
St. John. He’d been only a vague memory of her childhood; the
famous, absentee uncle, who had lived far away and wrote scary
stories.

At the memorial, he’d shown no grief,
stone-faced. But he’d taken care of the funerary arrangements
beforehand, sparing no expense. After the ceremony, he’d finally
approached Edie, saying “You’re going to be living with me now.”
His smile had been forced.

Uncle Landon was all right, she guessed. He’d
given her a car and a cell phone. She had access to his credit
card, along with cash money. She didn’t need to worry about food to
eat and clothes to wear. But that was as far as his attention went.
He didn’t sit with her. He didn’t talk to her. He didn’t try to
tell her: “It’ll get better, Edie,” or “They’d want you to be
happy, Edie.” He just sat at his computer, conjuring up ghouls and
goblins and ghosts, while he fueled his body with coffee and
cigarettes.

Right now, she wished that she had some
coffee to warm her body against this biting cold. She was sure her
nose had already fallen off, but she was too rigidly frozen to go
look for it.

Nearby she heard another floorboard
creak.

She strained her stiff, glacial muscles to
move and ran back to the foyer. The chandelier was still lit and it
illuminated much of the area, but there were still shadowy places
where the light couldn’t reach, or refused to reach.

Determined to be free, she found some courage
and used it aggressively.

A chuckle came from the shadows, and then a
deep, haunting voice said, “What a pathetic, little liar, you are.
I’ve never seen someone so scared in all my life, girlie girl.”

She grasped her necklace, the metal made of
courage, not gold.

“
Come out, then,” she
taunted. “Why are you hiding? Are you ugly? Got warts all over your
face or something?”

She waited for him to growl, to grab her, but
he said nothing, did nothing. She guessed what they said about
bullies was true: if you were to stand up to them, they’d back
down.

She’d been smiling at her victory, but then
frowned, as a cold presence brushed past her. She saw her breath
escape, before she was knocked down by an unseen force, and then
fell on the floor. She remained there, curled up like a frightened
child, whimpering.