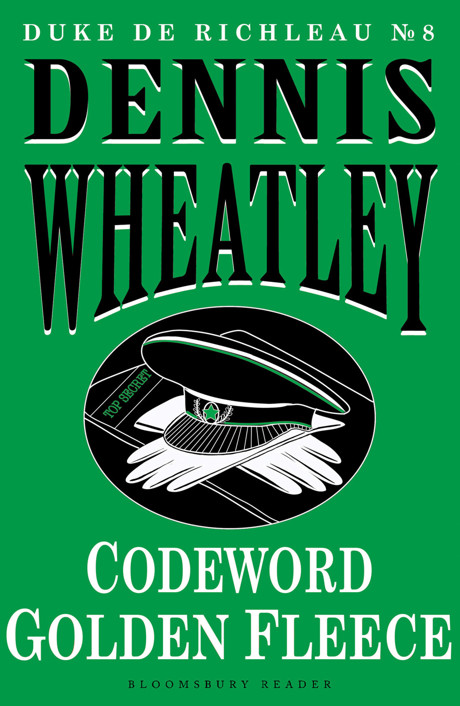 With my most grateful memories of those days
when, as our dear ‘Ambassador’ in a nameless
State, he lightened many difficult hours for
myself and my colleagues by his imperturbable
good humour and most enchanting wit

1 Storm Clouds on the Horizon

7 Night in the Quiet Forest

8 Night in the Stricken City

9 The Indomitable Four go to War

12 Death in the Afternoon

16 And They Wept Bitterly

A Note on the Author

Dennis Wheatley was my grandfather. He only had one child, my father Anthony, from his first marriage to Nancy Robinson. Nancy was the youngest in a large family of ten Robinson children and she had a wonderful zest for life and a gaiety about her that I much admired as a boy brought up in the dull Seventies. Thinking about it now, I suspect that I was drawn to a young Ginny Hewett, a similarly bubbly character, and now my wife of 27 years, because she resembled Nancy in many ways.

As grandparents, Dennis and Nancy were very different. Nancy’s visits would fill the house with laughter and mischievous gossip, while Dennis and his second wife Joan would descend like minor royalty, all children expected to behave. Each held court in their own way but Dennis was the famous one with the famous friends and the famous stories.

There is something of the fantasist in every storyteller, and most novelists writing thrillers see themselves in their heroes. However, only a handful can claim to have been involved in actual daring-do. Dennis saw action both at the Front, in the First World War, and behind a desk in the Second. His involvement informed his writing and his stories, even those based on historical events, held a notable veracity that only the life-experienced novelist can obtain. I think it was this element that added the important plausibility to his writing. This appealed to his legions of readers who were in that middle ground of fiction, not looking for pure fantasy nor dry fact, but something exciting, extraordinary, possible and even probable.

There were three key characters that Dennis created over the years: The Duc de Richleau, Gregory Sallust and Roger Brook. The first de Richleau stories were set in the years between the wars, when Dennis had started writing. Many of the Sallust stories were written in the early days of the Second World War, shortly before Dennis joined the Joint Planning Staff in Whitehall, and Brook was cast in the time of the French Revolution, a period that particularly fascinated him.

He is probably always going to be associated with Black Magic first and foremost, and it’s true that he plugged it hard because sales were always good for those books. However, it’s important to remember that he only wrote eleven Black Magic novels out of more than sixty bestsellers, and readers were just as keen on his other stories. In fact, invariably when I meet people who ask if there is any connection, they tell me that they read ’all his books’.

Dennis had a full and eventful life, even by the standards of the era he grew up in. He was expelled from Dulwich College and sent to a floating navel run school, HMS Worcester. The conditions on this extraordinary ship were Dickensian. He survived it, and briefly enjoyed London at the pinnacle of the Empire before war was declared and the fun ended. That sort of fun would never be seen again.

He went into business after the First World War, succeeded and failed, and stumbled into writing. It proved to be his calling. Immediate success opened up the opportunity to read and travel, fueling yet more stories and thrilling his growing band of followers.

He had an extraordinary World War II, being one of the first people to be recruited into the select team which dreamed up the deception plans to cover some of the major events of the war such as Operation Torch, Operation Mincemeat and the D-Day landings. Here he became familiar with not only the people at the very top of the war effort, but also a young Commander Ian Fleming, who was later to write the James Bond novels. There are indeed those who have suggested that Gregory Sallust was one of James Bond’s precursors.

The aftermath of the war saw Dennis grow in stature and fame. He settled in his beautiful Georgian house in Lymington surrounded by beautiful things. He knew how to live well, perhaps without regard for his health. He hated exercise, smoked, drank and wrote. Today he would have been bullied by wife and children and friends into giving up these habits and changing his lifestyle, but I’m not sure he would have given in. Maybe like me, he would simply find a quiet place.

1
Storm Clouds on the Horizon

The summer night was warm and still. Laughter came faintly on the air from a house at the top end of Curzon Street, Mayfair, where a dance was just beginning. Débutantes, dowagers and their escorts were driving up in a stream of luxury cars; the girls looking their loveliest in colourful silks, satins and brocades, the men in their peace-time uniform of pleasure—white tie, buttonhole and tails. The lights of London were still burning.

Further down the street in one of the first-floor flats at Errol House, a small dinner party was in progress. The Duke de Richleau and his guests had gone in to dinner at eight o’clock, but coffee was not served until after ten.

This party on the night of Friday, the 28th of July, 1939, was at the same time a reunion and a farewell. Rex Mackintosh van Ryn, the great hulking American with the ugly face and the enormous sense of fun, had, as usual, been in London for the season; but now all his world was about to depart with rod or bathing-suit or gun. He was leaving next morning for Biarritz to take part in the International Tennis Championship, and the frailest of their company, little, stooping, bird-faced Simon Aron, was to accompany him as far as Paris. But there their ways would divide, as in August Simon could never be persuaded to forgo the attractions of his spiritual home—the Casinos, beaches and terraced restaurants of the South of France.

Richard Eaton and the Princess Marie Lou, that pocket Venus with the heart-shaped face and deep violet eyes, whom he had brought out of Russia to be his wife, were to make a leisurely progress up the Rhine and so on into Austria.

De Richleau himself was going to Poland, and with him he was taking the remaining member of the party: the beautiful Lucretia José, whose magnificent burnished hair had caused her
to become that almost legendary figure in the power politics behind the Spanish Civil War known as The Golden Spaniard’.

The long Hoyo de Monterrey cigars which were the Duke’s special pride had just been handed round, and as he exhaled the first cloud of fragrant blue smoke Simon’s dark, nervously flickering eyes came to rest affectionately on his host. It flashed through his quick mind how little the older man had aged in appearance since he had first met him, six years before.

His hair and ‘devil’s’ eyebrows were no greyer; his eyes, which at times could become so piercing, had lost none of their brilliance, and there was still no sign of age or weakness in the fine distinguished face, with its broad forehead and beautifully moulded mouth. He was, as usual on these intimate occasions, wearing a claret-coloured vicuna smoking suit with braided fastenings; and Simon thought—as he had often done before—how the touch of colour emphasised the Duke’s resemblance to the portrait of a Cavalier by Van Dyck, which was one of the four old masters on the panelled walls of the richly furnished dining-room.

The Duke took up the medium-sized balloon glass which held some of his priceless old brandy, and swivelled it gently for a moment below his aquiline nose to enjoy the rare ethers, before he raised it, saying:

‘It’s good to see you all gathered again about my table, but “the best of friends …” eh—you know the rest. Here’s good hunting to us all, and may we yet be spared for many another merry meeting.’

Simon lifted the glass of golden Yquem with which he was still toying. ‘Wish you were both coming South with me,’ he said jerkily. ‘So much more—er—civilised than Poland.’

‘But Poland has its attractions,’ de Richleau murmured with a smile.

‘I’ll say it has,’ boomed Rex; ‘the best snipe-shooting in Europe and real hospitable folk to do the honours.’

Richard ran a hand over the smooth brown hair brushed so neatly back from the ‘widow’s peak’ in the centre of his forehead. ‘But the call of the snipe is only half the story,’ he said quickly. ‘The main reason for the trip is to see again the haunts of his boyhood. Isn’t that so, Greyeyes?’

The Duke nodded. ‘Yes, my mother was a Plackoff, and in the Czar’s day her family had vast estates in Poland. I recently met Baron Lubieszow, who now owns a small portion of them,
and his invitation to visit him was much too tempting for me to think of refusing.’

‘All right for you,’ Simon’s full-lipped mouth broke into a wide grin, ‘but how about Lucretia? Not much fun for her.’

‘How like you, Simon dear,’ she smiled; ‘always so thoughtful for all of us. I don’t want to go a bit really. I ought to go back to Spain. There are such thousands of our poor people who need someone to look after them.’

‘Nonsense!’ laughed the Duke. ‘You came back to us more dead than alive barely two months ago, and, though staying at Cardinal’s Folly with Richard and Marie Lou has already made a different woman of you, you are far from being your old self yet; and I have no intention of letting you return to those scenes of horror for many months to come. The war is over. You played your part in it most gallantly, but that chapter of your life is finished.’

Stealing Fire by Win Blevins
Unlikely Rebels by Anne Clare
The Night Gardener by Jonathan Auxier
The Soldier's Daughter by Rosie Goodwin
Simply Heaven by Serena Mackesy
Standing By: A Knight's Tale #2 by Burgoa, Claudia Y.
Midnight Exposure by Leigh, Melinda
Seduced and Enchanted by Stephanie Julian
Too Devious to Tame (The Giovanni Clan) by O'Connor, Doris
Allure of the Vixen by Morian, C. C.