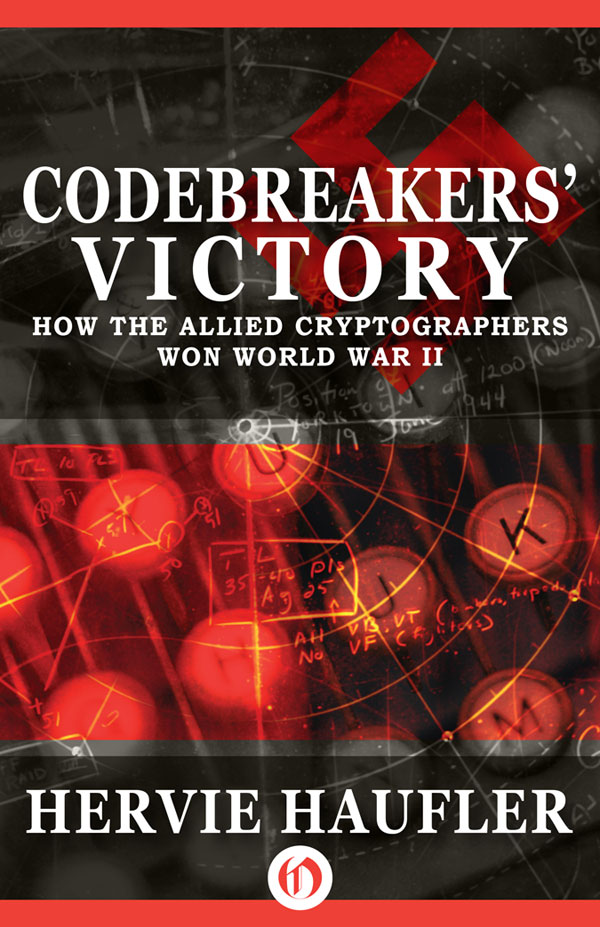 For my untiringly supportive family: Patricia, Christopher and Marsha, Jonathan and Carolyn

Within the history of World War II lies a vital story that has become public knowledge only decades after the war's end: the role cryptanalysts played in securing the Allies' victory. The story remained cloaked for so long because, with victory won, the cryptanalytic geniuses and their thousands of support staffers pledged themselves to secrecy about their wartime activities. It was only when Allied military authorities agreed that relaxing their hold on disclosure would no longer harm their national interests that the full story of the codebreakers began to emerge.

As more and more details have come to light, growing awareness of the codebreakers' impact on the course of the war has forced revisions in its history and in the perceptions of many of its prominent figures. Yet these changes have seemed to come grudgingly. Histories written after the code-breaking revelations became available to the public frequently give the impression that the cryptanalysts' efforts were mere appendages to the larger war, inconvenient afterthoughts that had to be tacked on simply for accuracy's sake.

Furthermore, the effects of the codebreakers' successes have been given a standardized assessment: they shortened the war and saved thousands of lives. These are, to be sure, no small accomplishments. Survivors of the cryptologic war have, themselves, tended to accept that the sum total of their work was that they knocked a couple of years off the war's calendar and kept legions of men, women and children from becoming war victims.

This book's argument is that the tacked-on acknowledgment of cryptanalytic successes and the mantralike repetition of the results of those successes sell the codebreakers short. Their contributions to the Allies' triumph amount to more than thatâa great deal more. An in-depth probe into those hundreds of thousands of decrypted enemy messages and a study of how Allied leaders used them in developing their battle plans leads to a different conclusion: that the tremendous advantage given to the Allies by the code-breakers was no less than the decisive factor tipping the scales in the war.

To state this book's premise another way, if a fully informed jury could sit in judgment to select the men who most influenced the war's outcome, it would pass over the celebrated heroesâthe generals such as Dwight Eisenhower, Bernard Montgomery and Douglas MacArthur, and the admirals Chester Nimitz, Bull Halsey and their ilk. Instead, it would single out much less heralded men, including Poland's Marian Rejewski, Jerzy RÃ³Å¼ycki and Henryk Zygalski; Britain's Alan Turing, Gordon Welchman, Max Newman and Tom Flowers, and America's William Friedman, Frank Rowlett, Joseph Rochefort and Thomas Dyer. These were the individuals who led the way in deciphering enemy radio-transmitted messages that bestowed upon Allied commanders the great boon of "playing a card game with your opponent's cards visible to you."

Axis cryptologic teams had some codebreaking successes, and by these means inflicted grievous losses on the Allies. But their breakthroughs diminished as the war progressed, largely because the Allies' superior mastery in cryptanalysis revealed when their own forces' ciphers were being penetrated. As a result, Axis commanders were increasingly blinded in making their decisions while Allied leaders moved with ever greater certainty.

The stories of star-studded pistol-packing generals inherently make for more rollicking reading than those of analysts locked away in rear echelon cells solving the intricacies of military ciphers. But there is an added reason why the personalities and exploits of the codebreakers are known far less than those of the top brass. The generals and admirals could begin to trumpet their triumphs the day after the war endedâand often before. The cryptologists, on the other hand, were sworn to silence by those pledges they signed at the war's end.

Soon after V-J Day, congressional hearings into the debacle at Pearl Harbor forced some disclosures of the U.S. codebreaking efforts against Japan. But in England, even though more than ten thousand men and women were involved in various aspects of the codebreakingâincluding nearly five hundred Americansâno word of their achievements leaked out until thirty years after hostilities had ceased. Winston Churchill, a great admirer and advocate of Britain's cryptologic program, spoke of his codebreaking team in a visit to their center at Bletchley Park as "the geese that lay the golden eggs but never cackle."

Churchill himself respected the secrecy pledge. In all his many volumes of World War II history, he included no more mention of the codebreaking than an occasional oblique reference to "special intelligence" or "trustworthy sources." In this regard, his reporting is incomplete. One can imagine, if he had lived, what joy he would have taken in revising his scripts to give full recognition to his secret weapon.

This book can do what Churchill was duty-bound not to do. It can present the evidence that codebreaking in World War II was the single most important factor enabling the Allies to win the war.

The first step toward Allied victory came when Polish cryptanalysts, as early as 1932, began breaking the Germans' supposedly impregnable Enigma code machine and then, on the brink of war, turned their discoveries over to their French and British allies.

At that point, the story passes primarily to the British who, at Bletchley Park (BP), assembled the masterminds and their support staff to carry the Poles' technologies to new levels of proficiency. Bletchley cryptanalysts made inroads into German codes within a few months of the war's beginning. But these early successes came too soon to have effect against the overwhelming might the Germans displayed in their invasion of Norway and their blitzkriegs in France. Together with Britain's superiority in radar development, however, BP's decrypts, code-named Ultra, helped British air marshal Hugh Dowding prevent the Germans from sweeping the skies clear of the Royal Air Forceâwhich Adolf Hitler saw as a prerequisite to the invasion of England. Decrypts of Italian codes were also key factors in two of the first British victoriesâover the Italian armies in North Africa and the Italian navy in the Battle of Matapan.

British codebreaking fully came into its own as a precursor to victory in the long, seesaw Battle of the Atlantic. Analysis of that struggle provides convincing evidence that Britain's gradual advance to dominance in cryptology was a key factor in preventing the German high command from using its U-boats, surface raiders and Luftwaffe aircraft to sever Britain's supply lifeline and starve the English into submission. With U.S. entry into the war, American signals intelligence (Sigint) teams joined in turning the tide so that German losses became so great they were forced to withdraw their U-boats from the North Atlantic and grant Allied convoys virtually free passage.

U.S. cryptanalysts' greatest contribution to Allied victory was their mastery of Japanese codes. The first American successes, code-named Magic, were against the code machines used by Imperial diplomats. Because Japanese militarists scorned including the diplomatic corps in their plans, however, U.S. decrypts provided no definite warning of the attack on Pearl Harbor. Afterward, U.S. Navy analysts quickly began breaking the code-book messages of the Imperial Navy. Their decrypts prevented another Pearl Harbor by revealing Japanese plans for a second surprise attackâthis one on Midway atoll. Japanese admiral Isoroku Yamamoto hoped that his assault on Midway would draw what was left of the U.S. Pacific fleet to its doom. Hawaii-based codebreakers made sure there would be no follow-up Japanese surprise. They gave Admiral Nimitz the information he needed to place his fleet so that planes from his carriers, along with those from the island itself, could descend unexpectedly on the Japanese ships. When all four of the Japanese carriers were sunk, the battle was over and the Japanese retreated. Midway, described by Nimitz as "a victory of intelligence," changed the entire course of the Pacific war by ending the long march of triumphs by the Japanese and putting them immediately on the defensive.

Later in the war, Magic decrypts became invaluable assets when they unveiled the reports of Japanese emissaries and military attaches who used the diplomatic machines to inform Tokyo of such matters as German plans for withstanding the Allied invasion of France.

In Europe, on the eastern front, where the Germans were striving to subdue Mother Russia, a host of intelligence forces combined to set up three critical Soviet victories. First, the USSR spy in Tokyo informed his spymasters of the Japanese decision to strike to the southeast rather than make war against Russia, a disclosure that freed many Red Army Far East divisions to be rushed to the battle that stopped the Germans short of capturing Moscow. At Stalingrad, Marshal Zhukov relied on his network of informants in planning his attack on the weak spots in the German lines and conducting his enormous entrapment of German troops. Finally, preparing for the horrific clash of arms in the Battle of Kursk, Zhukov based his strategy on what secret intelligence was telling him and, as a consequence, broke the back of German military might.

Ultra decrypts lit the way for the Allied invasions of Sicily and Italy that drove Benito Mussolini out of power and, ultimately, Italy out of the war. When German armies took over the defenses of Italy, Ultra decrypts warned of counterattacks by the German war machineâthe Wehrmachtâ that could have pushed Allied beachheads at Salerno and Anzio back into the sea. Knowledge of German intentions gleaned from broken intercepts helped tie down and decimate German divisions that could otherwise have been fighting in Normandy or on the eastern front.

As D-Day approached, Ultra and Magic intelligence greatly aided the planners of the Normandy landings by supplying details of the Germans' West Wall defenses and orders of battle. Decrypts were also essential to the clever deceptions that fooled Hitler and his generals into massing formidable German forces in the wrong places, anticipating landings that never came. The invasion marked the high point in the exploits of the network of agents in Britain whom the Germans believed to be working for them but who, in actuality, were under British control and misinforming their German masters. These agents' false reports were skewed to make the Germans believe that the Normandy landings were only a feint preceding the main Allied thrust on the Pas de Calais. Many observers believe that but for these measures, the landings would not have been attempted in June 1944 or would have failed, with unimaginable consequences for the further course of the war.

In the Pacific theater, meanwhile, U.S. Admiral Nimitz and General MacArthur relied on their codebreakers to advise them in conducting the giant pincer movement that climbed up the islands and closed on the Japanese homeland. Decrypts of Imperial Navy messages pinpointed targets for Allied submarines, enabling them to devastate Japanese shipping and withhold from the military machine the Southeast Asian oil it needed in order to keep operating.

Similarly, in the China-Burma-India theater, the codebreakers were indispensable in dashing Japanese hopes to drive into India and link up with their Nazi partners for control of both Asia and Europe. Informed by his cryptanalytic teams, Lord Louis Mountbatten and his generals, with American and Chinese support, stopped the invaders at the borders of India and turned that "forgotten war" into a series of massive Japanese defeats.

The codebreakers also played a significant part in slowing Germany's technological progress. With decrypts revealing where menacing new developments were under way, Allied teams hampered nuclear advances, blasted sites where advanced work was being done on V-weapons and delayed the introduction of new jet aircraft and snorkel-equipped U-boats.

In the war's final phases, a flood of decrypts and captured intelligence documents sped the Japanese collapse. Allied leaders were kept informed of the standoff between Tokyo militarists and moderates over a surrender agreement. And Harry Truman gained insights into the unbending minds of enemy militants that gave him cogent reasons to drop the atomic bombs.