Clutch Of The Cleric (Book 4) 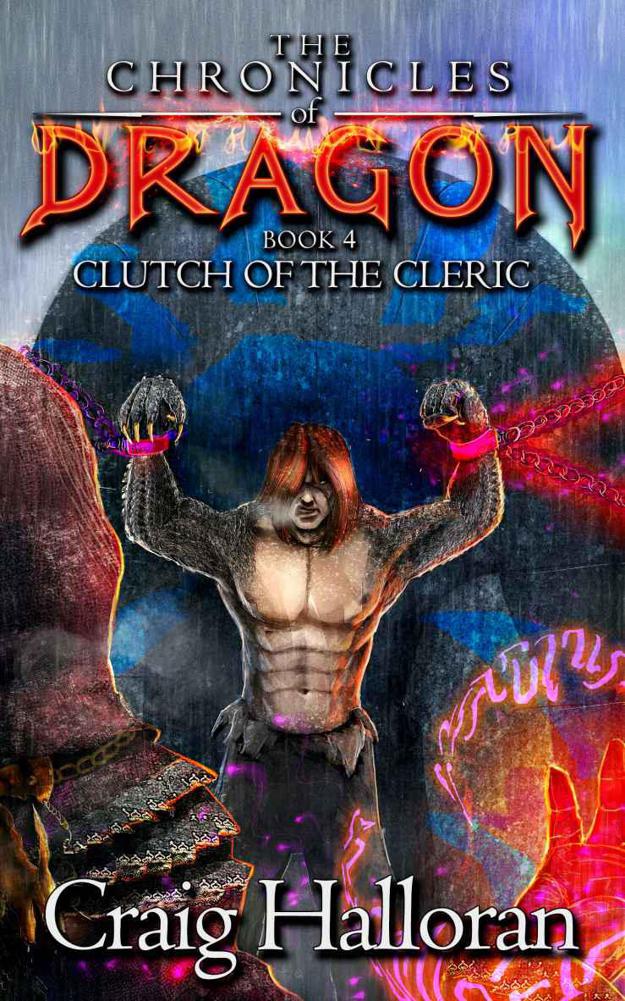 All rights reserved. No part of this publication may be reproduced, stored in a retrieval system or transmitted, in any form, or by any means, electronic, mechanical, recorded, photocopied, or otherwise, without the prior permission of the copyright owner, except by a reviewer who may quote brief passages in a review.

This book is a work of fiction. Names, characters, places, and incidents either are the product of the author’s imagination or are used fictitiously, and any resemblance to actual persons, living or dead, events, or locales is entirely coincidental.

A flute-like sound drifted into my ears.

Brenwar’s eyelids fluttered. His meaty hands clamped over his ears. “No!” he growled.

I couldn’t say anything. My tongue felt like water. But I could see. Both of them. Shadows in the forest coming out of the darkness. One was male, the other female. Each pressed a set of small pipes to their lips. Tiny horns protruded from their heads. They stood on stout legs with the hooves of mountain goats.

The music tore at my mind.

I screamed, but I couldn’t hear myself.  I had to move. Had to escape. Run. Flee. I knew the stories. I knew the tales. Whatever the Satyrs captured they kept. Never to be seen again.

I felt like I’d gone days without water when I opened my eyes up. A soft soothing light was in my eyes, but I still felt weary.

The smell of sweet ginger filled my nostrils, and someone placed a cold damp cloth on my head.

The warm face of Sasha greeted me with a smile as she reached over and touched my face.

“It’s not time yet, Sasha,” Bayzog said. A faint image of him in his red wizard tunic caught my eye.

Her perfect lips started singing; the gentle, mystic words of an ancient lullaby churned in my ears.

Slowly, I opened my eyes, the thirst I remembered now gone. Then I saw Brenwar, as angry as I ever saw him before.

“What are you yelling for?” I said, shielding my eyes, squinting.

He whirled on me, so angry I could see the red behind his beard.

“WHAT AM I YELLING
FOR?”

A large figure stepped between us. It was one of those Roving Rangers.

“Get out of my way,
Elf,” Brenwar growled.

Brenwar shoved past Shum, stuck his stubby finger in my face, and said, “Why did you leave me, Nath Dragon!” His voice cracked. “Why did you do that?”

I didn’t know what to say. I was feeling great, but I had the feeling I shouldn’t be.

“Why is everyone looking at me like that? Where's Ben? Is he alright? And how did I get here?”

Bayzog took a seat beside me and said, “I’ll catch you up. Ben led you back here on the horses after you fainted.”

“Ah good, I knew Ben had it in him. I guess my wounds were much worse than I thought. So, where is he?”

“He’s with the Legionnaires, on a mission.”

“Huh, a mission. He couldn’t be on a mission already. Could he? Don’t they have to go through training?”

“Fool! He could have been on twenty missions already. He’s been gone for weeks. You’ve been asleep for weeks. I’ve been looking for you; my men have been looking for you, and we might never have found you if we hadn't come across that temple. And we might not have ever known you were there if we hadn't found this!” He held out a black Dragon scale. “And this led us here.”

I grabbed the scale with my left hand and pinched it in my fingers. My black Dragon fingers. I jumped off the couch.

“SULTANS OF SULFUR! I have two Dragon arms!”

“You can say that again!” Brenwar shot back. “You foolish Dragon!”

I touched my toes, my shins, my thighs, chest and face.

“No, he won’t! He’d have been alright if he’d done as he was told. Dragon! What have you done?” Brenwar exclaimed.

“I saved Dragons!” I yelled back. “And if I’d waited on you, they’d probably be dead!”

I gazed at my scales, my hands, my claws. A thrill went through me. I felt unstoppable! But there was something else. The white spot of scales was on both palms in the middle.

Brenwar poked me in the chest, saying, “I was at the temple. I saw what you did. And your new friend, Ben, confirmed it. You killed again! Now look at you!”

“You started it!” I said, pointing at Brenwar.

“You did this, not I, Dragon! You ran off on your own, like a fool, and now you have twice the problem!”

“Don’t call me a fool again, Brenwar,” I said, glowering down on him. I was ready to rip his beard off.

He rose up on his toes and said, “What are you going to do,
breathe on me? Fool!”

I took a deep breath.

He laughed at me.

Calmness fell over me. “We have to work together on this.” She said, eyeing all of us. “It’s that important. Bayzog, tell him.”

I slumped into the sofa, feeling incredibly angry and guilty, but I let Sasha’s charm calm me.

“Yes, Bayzog, Ben mentioned there was something you wanted to tell me. What is it?” I said, noticing my beard.
“Ugh! Really?”

Bayzog gave me a funny look.

I shook my head, which was beginning to ache, saying, “Go on then.”

“Dragon, I can’t say that I, or anyone in the world, for that matter, can understand your unique constitution
―well, excluding your father, of course.”

My head started aching. What would my father think?
”

“I don’t think things are as bad as they look, however. I would venture that it was inevitable that you would start turning into a Dragon eventually, and your sc
ales, well, they aren’t a true reflection of your nature. Nath, we all know that you are good, as good a Man as we all know, but there is darkness in all of us. No one person is perfect or without blemish; most just hide it better on the outside. That’s why it is difficult to tell the good people from the evil sometimes.”

“This isn’t helping, Bayzog,” I said, holding my head in my hands, irritated.

“Our deeds are what define us. Our actions. Our words. Not our garments, not our looks. What is inside a Man, in his heart―his Dragon heart―is what counts. Keep doing what you are doing.”

“And what if you can’t? Will you stop being good altogether then? Will you join the Clerics of Barnabus?”

“So stop whining then,” B
ayzog said.

“You are whining,” Brenwar added, folding his arms across his chest. “Like a baby Orc.”

“Fine, I’m whining, but I’m sure all of you would do the same if you had these.” I lifted my arms. “I’m not going to be wooing the ladies like I used to; that’s for sure. But, I imagine I could be used in a carnival to frighten children.”

“I like them,” Sasha said, rubbing my scales, smiling. “I think they are marvelous.”

Her sweet words made me feel better; they really did. I guess I was just going to have to get used to it, but I really needed to fix it.

“Bayzog, my father says there are many things in this world that can heal. Perhaps you can help me find some of those things. Maybe I just need a different Thunderstone or something.”

Bayzog walked over to his large table, opened his tome, thumbed through the pages, and threw his hands out. When he twitched his fingers, an image of a mystic amulet formed and hung in the air, gold and silver with a bright green gemstone in the middle.

“The Ocular of Orray. The legend says that it can bring health, peace and prosperity. Its powers have been known to cure lycanthropes and liches, and to restore the undead. Perhaps it can help.”

Bayzog flicked his fingers. The amulet broke into several pieces.

“It was stolen from the Elves in Elome a century after the last Dragon War, never to be seen again. According to the lore, the thieves broke it up into many pieces and spread them all over Nalzambor, for the Occular cannot be destroyed.”

“So, who stole it? Who can go into Elome and steal anything?” Nath sighed. “It’s a fortress.”

“We’d have to ask the Elves that,” he said, closing the book.

“So, I’m supposed to search the entire world for this Occular? I’d rather just save the Dragons.” I looked at Shum. “And what are you doing here?”

“I have an interest in the power of the Occular as well. Remember my King? He needs the healing, too.”

“I see. And what about the Dragons? I’m not going to abandon them for this quest.”

Brenwar shoved my sword and scabbard in my chest.

“Where are you going?”

“With you,” Sasha said, tying the neck with the magic of her fingers. “I’ve been needing to stretch my legs. Bayzog has kept me cooped up in here too long.”

It seemed everybody was ready for a trip but me as I shook my head and rose to my feet.

“So, now I need supervision everywhere I go?”

“Fine,” I said, buckling my sword around my waist as Sasha draped my quiver over my shoulder and handed me Akron. I was ready for anything. But before I closed my eyes, I said one last thing. “But I’m going to save whoever and whatever I want to. Agreed?”

Everyone shook their heads except Brenwar, who laughed.

“Well, let it never be said I didn’t consort with highly unreasonable people.”

As soon as I closed my eyes, the adventure began.

Feral Park by Mark Dunn
Bella's Christmas Bake Off by Sue Watson
none
Dead Lock by B. David Warner
The Devil's Concubine (The Devil of Ponong series #1) by Braden, Jill
Princess In Love by Meg Cabot
Hellboy: Unnatural Selection by Tim Lebbon
Darkness Awakened (Primal Heat Trilogy #1) (Order of the Blade) by Rowe, Stephanie
In the Drink by Kate Christensen
An Early Engagement by Barbara Metzger