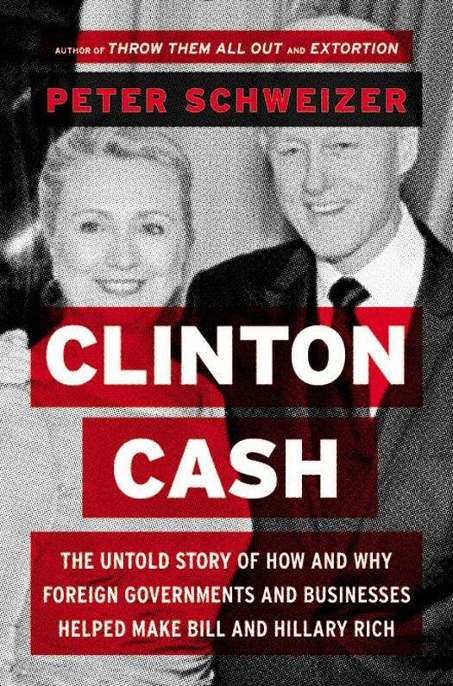 A
sk Team Clinton about the flow of tens of millions of dollars to the Clinton Foundation (the formal name is the Bill, Hillary, and Chelsea Clinton Foundation, originally called the William J. Clinton Foundation) from foreign governments, corporations, and financiers and you typically get an interesting explanation: it’s a sign of love. “As president, he was beloved around the world, so it should come as no surprise that there has been an outpouring of financial support from around the world to sustain his post-presidential work.”
1

Ask Bill about the tens of millions of dollars he has made in speaking fees around the world, paid for by the same cast of characters, and you will get an equally charitable explanation: it’s evidence of his desire to help people. By giving these highly paid speeches, Clinton says, “I try to help people think about what’s going on and organize their lives accordingly.”
2

The reality is that most of what happens in American politics is transactional. People look for ways to influence those in power by throwing money in their direction. Politicians are all too happy to vacuum up contributions from supporters and people who want access or something in return. After politicians leave office, they often trade on their relationships and previous positions to enrich themselves and their families.

The law dictates how much politicians can collect in campaign contributions, limits their ability to make money on the side, and requires the disclosure of those contributors. Hopefully, politicians are also limited to some extent by their conscience. A sense of decency and good judgment ought to prevent politicians on both sides of the aisle from engaging in certain transactions—even if they think they can get away with it.

But while there is ample debate about which transactions should be limited and how, there is near-universal agreement that the game, however muddy, should be exclusively played by Americans. For this reason, it has long been illegal for foreigners to contribute to US political campaigns. In 2012 two foreign nationals challenged the constitutionality of that law. The US Supreme Court decided 9–0 declaring the law not only constitutional, but eminently reasonable.
3

The Clintons, however, often take money from foreign entities. And that money, donated to the Clinton Foundation or paid in speaking fees, comes in amounts much larger than any campaign contribution. Indeed, the scope and extent of these payments are without precedent in American politics. As a result, the Clintons have become exceedingly wealthy.

The big question is whether taking such money constitutes a transaction. The Clintons would undoubtedly argue that it does not. The evidence presented in this book suggests otherwise.

Any serious journalist or investigator will tell you that proving corruption by a political figure is extremely difficult. Short of someone involved coming forward to give sworn testimony, we don’t know what might or might not have been said in private conversations, the exact nature of a transaction, or why people in power make the decisions they do. This is why the Federal Bureau of Investigation (FBI) sets up sting operations: to catch suspected malefactors in the act.

That is also why investigators look primarily at patterns of behavior. Imagine, for example, that you are exploring whether a politician is doing favors for a major campaign contributor in a manner that might be illegal. If investigators were to find that the
timing
of major campaign contributions occurred immediately before the politician made a highly favorable decision for the donor, and that this pattern could be well established, such timing would certainly warrant further investigation.

This was precisely the approach I took in my 2011 book,
Throw Them All Out,
concerning stock trades and members of Congress. Were members of Congress engaged in insider trading in the stock market? I looked at both their stock trades and their official activities, such as voting on certain bills. I discovered that politicians from both parties had curious patterns in their stock picks, often buying and selling at opportune times. During the 2008 financial crisis, for example, some politicians sold stocks or shorted the market (bet that it would go lower) shortly after receiving secret economic briefings from senior government officials.

Was this proof that insider trading had taken place? No. As I pointed out in the book, we could not know precisely
why
the politicians were making these particular trades at those particular times. But the patterns were highly suspicious. Shortly after the release of the book and a
60 Minutes
segment on my findings, politicians from both parties cooperated in passing the STOCK Act, which was designed to outlaw congressional insider trading. President Barack Obama condemned the practice during his 2012 State of the Union Address and later signed the STOCK Act into law. (The law was subsequently gutted by Congress and the White House, but that’s another story.) I can proudly say that my findings were attacked by both Republicans and Democrats.

In a
legal sense
I could not
prove
that insider trading had taken place. I didn’t know precisely the motivations at work when stocks were being traded. But the pattern and timing of those trades raised questions so troubling that even members of Congress could not ignore it.

In 2013 I published a follow-up called
Extortion
, which argued that members of Congress from both parties were in the habit of “extorting” campaign contributions and other favors from businesses and outside groups. Money flowing into politics was not just about outside interests trying to “bribe” politicians; politicians were knowingly putting outside interests in a position where they had to buy “protection” from them. I also released to the public for the first time the “party dues” lists whereby politicians were required to pay a certain amount of money to their party in order to obtain seats on certain congressional committees. The more important the committee, the more you were expected to pay. I further explained how politicians from both parties were using leadership PACs to feather their own nests, tapping those funds to pay for things that enhanced their own lifestyles.

Was I able to prove intent or know why politicians were doing what they were doing? Of course not. But as before, the timing of these transactions was highly suspicious. Once again,
60 Minutes
ran a segment about my findings which led to legislation being introduced that would restrict how leadership PAC funds were used. And once again, my findings were attacked by both Republicans and Democrats.

Given my previous focus on bipartisan self-dealing and corruption, why am I now focused on one couple? Do I simply have it in for Bill and Hillary? Am I somehow trying to derail her prospects of being elected president in 2016?

The answer is pretty straightforward: the global dealings of this political couple deserve bipartisan citizen attention as much as congressional insider trading or campaign contribution extortion did. No one has even come close in recent years to enriching themselves on the scale of the Clintons while they or a spouse continued to serve in public office. The ability of any other ex-politician, whether a former president, senator, or congressman, Republican or Democrat, to accumulate such large amounts of money in such a short period of time is unmatched. It’s not even close.

To put an even finer point on it: I am focusing specifically on financial transactions involving
foreign
businesses, investors, and governments. Foreign interests can’t donate to political campaigns. But they can pay money for speeches. And they can donate to the Clinton Foundation. Are they doing so to buy influence? Does the timing of the payments coincide with key decisions made by US government officials? Are they successful in obtaining favorable outcomes?

Using publicly available sources, including financial records, tax records, government documents, and more, my research team and I have uncovered a repeated pattern of financial transactions coinciding with official actions favorable to Clinton contributors that is troubling enough to warrant (in my opinion) further investigation by law enforcement officers. Just as I couldn’t prove
that members of Congress were guilty of trading on inside information, I cannot say exactly why these financial transactions are taking place. But as we will see, their unprecedented scale, the often shady nature of the characters involved, their timing, and their frequently favorable outcomes are all, or ought to be, extremely troubling.

A
s Hillary famously noted, the Clintons were “dead broke” when they left the White House in 2001. This statement was immediately challenged as a gross exaggeration.
4,5
Still, their means were modest compared to those of other politicians, such as George W. Bush, whose net worth is $20 million, or John Kerry, whose net worth is well over $100 million.

Because the Clintons’ financial public disclosures are given in ranges, it’s impossible to know their precise net worth. The Clintons’ confirmed income between 2001 and 2012 was at least $136.5 million, according to the
Washington Post. USA Today
estimates Bill Clinton’s personal net worth to be $55 million. That’s a very big jump from “dead broke” in a very short time. It is important to consider the fact that payments made to Bill Clinton for speeches or consulting fees benefit wife Hillary and their married net worth.

Some of this income comes from book deals. The Clintons have been paid handsomely to write their public memoirs. But the greater part of it by far comes from Bill’s speechmaking. According to financial disclosures, since leaving the White House, Bill has been paid an annual average of over $8 million for giving speeches around the world. The fees he collects are enormous and unprecedented, sometimes as much as $500,000 or even $750,000 per speech. It’s hard to imagine that Clinton’s pearls of wisdom are worth that much to even the most worshipful audience.

But as this book will try to show, Bill’s speechmaking does not happen in a vacuum. It is part of a larger pattern of activity that has never before been exposed to public scrutiny.

During Hillary’s years of public service, the Clintons have conducted or facilitated hundreds of large transactions (either as private citizens or government officials) with foreign governments, corporations, and private financiers. Some of these transactions have put millions in their own pockets thanks to Bill’s lucrative lecture career. Others were part of US foreign policy. Others put millions into their legacy project, the Clinton Foundation. As we will see, the sums involved are nothing short of staggering.

Ethan Justice: Origins (Ethan Justice #1) by Jenner, Simon
Carl Hiaasen by Team Rodent: How Disney Devours the World
Casa Azul by Laban Carrick Hill
The Tiara on the Terrace by Kristen Kittscher
Meta by Reynolds, Tom
The Santinis: Leonardo, Book 1 by Melissa Schroeder
The Last of the Monsters by Lila Dubois
The Museum of Abandoned Secrets by Oksana Zabuzhko
The Magykal Papers by Angie Sage
The Masters by C. P. Snow