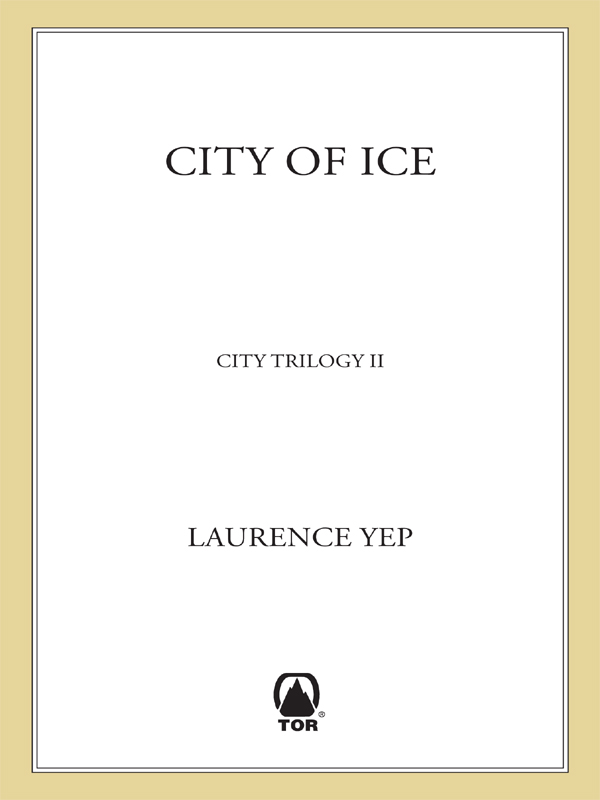 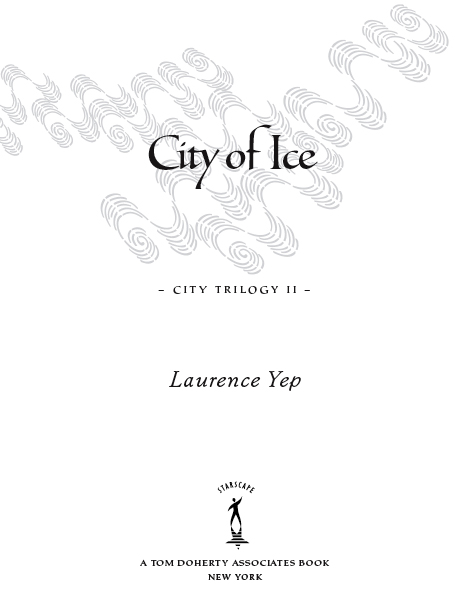 Copyright infringement is against the law. If you believe the copy of this e-book you are reading infringes on the author's copyright, please notify the publisher at:
us.macmillanusa.com/piracy
.

To Joanne, who dragged me up to Chena Hot Springs,
where I got to see the Aurora Borealis and
ride in a dogsled that hit a tree

Guide to Pronunciation of Kushan Names

Amagjat
(Ah-mahg-yat). A hag who preys on unwary travelers in the Far North.

Nanaia
(Na-ni-ah). A goddess worshipped by the Kushans.

Prince Tarkhun
(Tar-koon). A Sogdian prince and father to Roxanna.

Roxanna
(Rok-sah-nah). The daughter of Prince Tarkhun and Lady Miunai who knows the Arctic like the back of her hand.

Tizheruk
(Tee-zer-ook). A serpent-like monster in the Arctic.

Scirye and her companions were thirty miles from the city of Nova Hafnia, located near the Arctic Circle, when they found the battle. Or rather, the battle found them.

They had flown this far north in search of Roland, one of the richest men in the world, and Badik, a malevolent dragon. Roland had ordered Badik to steal an antique archer's ring, a great treasure of Scirye's Kushan people, from a San Francisco museum and killed Scirye's sister, Nishke, during the theft. Leech's good friend and mentor, Primo, had also died during the theft.

Scirye, Leech, and their friends had set out in pursuit, the chase taking them through a Hawaiian volcano where they had fought by the side of the goddess Pele. When Roland had stolen a second treasure from Pele, the goddess had summoned the Cloud Folk to spin a wing out of straw, a triangle about thirty feet at its base and sixty feet long. Small triangles stuck up from its tail and belly like fins to make it more aerodynamic.

They had been flying for a week and, as usual, Naue was singing his own praises: “I am Naue, whose kindness dwarfs even his awesome strength.”

Naue was one of the world's great winds, whom Pele had asked to carry the wing to the Arctic. Though he was as powerful as a hurricane, he had the mind, patience, and emotions of a three-year-old. “I outrace the sun and tickle the stars,” he sang. There seemed to be no end to Naue's achievementsâat least in Naue's mind.

“What's that?” Scirye asked, straining to hear over Naue's roaring.

“What's what, my lady?” Kles yawned. The griffin, only eight inches high, lay curled up on her lap like a napping kitten.

Scriye cradled her friend in the palms of her hands and deposited him on her shoulder. The lap griffin promptly curved around her neck so that his hindquarters remained on one of her shoulders while his head rested on the other as if he were a collar of tawny fur and feathers. Warm. Cozy. And very tickly.

Rising, she stepped carefully, because the matlike surface of the wing gave slightly beneath her feet, and got as close as she dared to the edge of the frame.

The frame was only four slender posts of straw united by crossbeams of the same material, and it sat within the center of the wing. The frame looked flimsy enough, like an unfinished house of straw, or a child's crude sketch of a house. But it shielded them against the winds and freezing cold.

This far north, Elios the Sun only lingered for four hours and even then his beams were weak. Scirye strained her eyes as she scanned the clouds below. They looked like the dirty stuffing of an old mattress that had been strewn about below from horizon to horizon. “It sounds like a motor.”

Koko the tanuki was busy grooming his pepper-colored fur. The fastidious Japanese badger did that at least once a day. “All I can hear is thatâ¦” He mouthed the word “airbag” and waved his paw in an all-encompassing gesture to indicate Naue.

The wing lurched violently and then began to buck as Naue roared, “What did you say, Noisy Lumpling?” All ground dwellers were lumplings to Naue.

Scirye gripped the frame for support. For a creature without ears, Naue had very good hearing. “Oh, mighty Naue”âthe wind ate up praise the way a child ate candyâ“my friend is so full of admiration that he can think of nothing else but your magnificence.”

The wing settled back into a smooth flight. “Well, of course,” Naue said. “Am I not Naue, greatest of winds?”

Since Scirye's mother, Lady Sudarshane, was a diplomat, Scirye had heard more than her share of boring speeches at embassy functions. Out of sheer survival, Scirye had learned how to pretend polite interest in anything. “Yes, please, tell us more about your exploits.”

As the wind started a booming, roisterous song about some race between himself and some Greek zephyrs, Scirye wondered how her father would have handled Naue. He was the imperial Griffin Master of her homeland, the Kushan Empire, which had grown rich and powerful controlling the trade between Asia and Europe for two thousand years. Scirye was sure her father, more at home in the sky than on the land and more comfortable with the creatures of the air than humans, would have Naue as eager to please him as a puppy.

Kles pointedly set a claw against his beak. “Don't hurt his feelings,” the griffin cautioned the badger softly, “unless you can sprout a pair of wings.”

Koko barely rolled onto his back in time as Koko's partner, the human boy Leech, buzzed low over the badger, the flying disks at the boy's ankles humming. They were metal circles that, when expanded to about a foot and a half in diameter, he was able to stand and fly about onâbut he was still learning and practiced every chance he got.

In a second, though, he came up short against the frame and, crossing his legs, turned himself around in a neat maneuver.

Koko fluttered a paw at him as if Leech were an oversize mosquito. “Shoo! Go buzz that overgrown lizard.”

An orphan, Leech had run away and joined forces with Koko, and they had survived in the mean streets of San Francisco with their wits. He had grown up thinking that he was gutter trash until he had met the man named Primo, who had begun educating him. He'd been devastated by Primo's death until he'd discovered how magical the disks were. Now they made him feel special and let him do what he loved the most: flying.

“There's a kind of buzzing?” she asked.

Leech bobbed up and down a few inches while he listened intently. After a moment, he nodded. “I bet it's an airplane.”

“I hear it too,” Bayang the dragon said. She was sitting at the apex of the wing, holding on to the reinlike straw rope that guided their woven craft along. Though she could have flown them on her back, she would have been too worn-out for the battle that no doubt awaited them at the end of their journey. Not only could Roland hire an army of human and magical mercenaries, but Badik the dragon would also be there.

Bayang craned her long neck now and squinted, trying to glimpse the source of the noise that Scirye had heard. At the same time, Scirye leaned against the frame, which was as strong as steel despite how flimsy it appeared. Leech flew over to the opposite side to check there.

Scirye followed his pointing finger. She saw light wink off something flat and silvery below. “But is it Roland's?”

Scirye tensed, hoping that they were nearing the end of the chase. “I hope so.”

“I'll go check it out,” Leech said eagerly, and started to rise out of the frame.

Private 03 - Untouchable by Kate Brian
A Crying Shame: A Jesse Watson Mystery by Ann Mullen
Stealth the Ghost Panther by Adam Blade
1415: Henry V's Year of Glory by Mortimer, Ian
Until by Timmothy B. Mccann
Deep Into the Abyss (Darkest Faerie Tale Series Book 2) by Riley Bancroft
Wild Hearts by Rhea Regale
Bones and Ashes by Gemma Holden
Gansett After Dark by Marie Force
Keep It Pithy by Bill O'Reilly