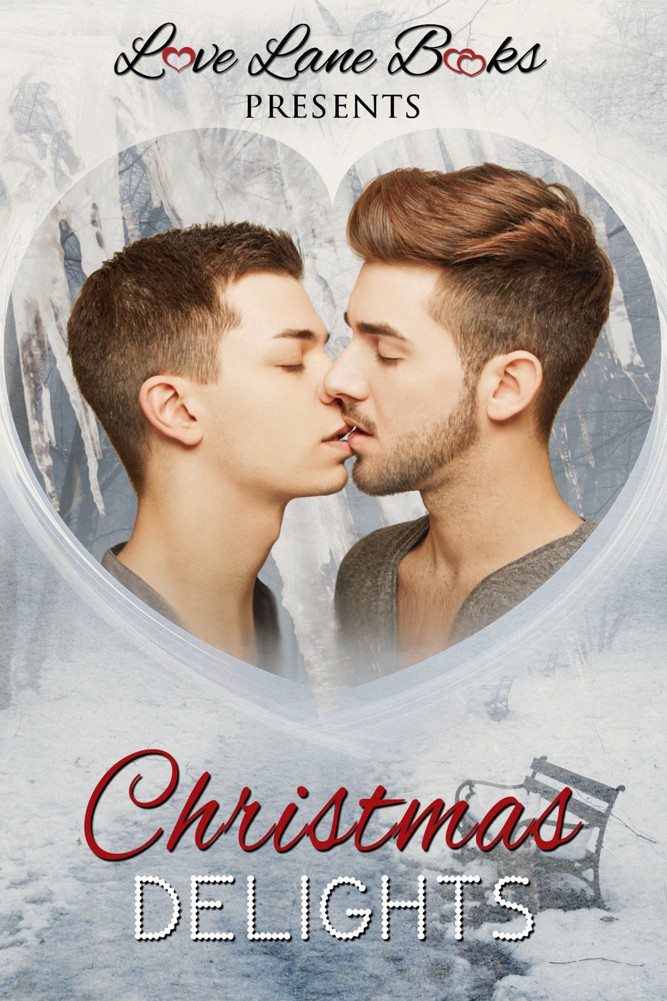 A collection of Male/Male gay romance stories set in and
around the Christmas season. Featuring brand new authors alongside existing
authors.

These stories are original works by each author. All
characters and events are products of the author’s imagination and any
resemblance to actual persons, places and events is purely coincidental.

This literary work may not be reproduced or transmitted in
any form or by any means, including electronic or photographic reproduction, in
whole or in part, without express written permission. This book cannot be
copied in any format, sold, or otherwise transferred from your computer to
another through upload to a file sharing peer-to-peer program, for free or for
a fee. Such action is illegal and in violation of Copyright Law.

All characters and events in this book are fictitious. Any
resemblance to actual persons living or dead is strictly coincidental.

I have so many people to thank for help in making this
anthology. An army of volunteers helped edit and proof. Thank you all. Xx

In particular, thanks go to:

Meredith Russell, for the awesome cover art. You sincerely
rock.

Erika Orrick and Stacia Hess, who jumped in at the last
minute and helped me. Mwah.

Jaymi Egerstaffer who made the anthology website all full
and wonderful and sexy.

Amber Kell, Chris Quinton and Meredith Russell (again!), I think
they know why.

… and always for my family.

Way back in January 2010 I had my first writing accepted by
a publisher. Dreamspinner Press included my story about an angel becoming human
in their Brush Of Wings anthology. The story, Ascension, was the first thing
that I had ever written for public consumption and played on the idea that
angels *ascend* to become human.

I recall the feeling of the story being accepted. Elation
and an overwhelming fear of what people would think when they read the story. I
had some good reviews, I had some okay reviews, no one flat out hated it (I
don’t think, although I may have blocked that from my memories!) so that was
good. Above all having my words in print was one of the greatest things that
has ever happened to me alongside my wedding day and the days of my children
being born. It meant
that
much to me.

I have a huge love of Christmas in all its forms. Whether
you celebrate a day in the season or not there is something very
different
about the season. I try to look past the commercialism and the crowds and focus
on the excitement and the anticipation. I also love to support new authors. I
want others to experience that high of having their words in print. It made a
lot of sense to me the best way to get to know how everything works in
e-publishing is to have the experience of it. So these things were the perfect
match and the anthology was born.

I really hope you enjoy this varied collection of male/male gay
romances, all with a hint of ‘happy ever after’ and that you find some new
authors that you can follow.

Happy Christmas and season’s greetings to everyone. Hugs, Rj
xxxx

Kay Berrisford - Gifts from the Tree

Caitlin Ricci - A Jaguar for Christmas

Gifts From The Tree,
Kay Berrisford

When Phin deserts James on Christmas Eve, offering vague
excuses, James is left wondering how well he knows the man he’s been seeing.
Phin, an expert on forest mythology, clearly has secrets, which doesn’t make
James feel any better as he faces Christmas alone. But when an attempt to
collect a Christmas tree takes a strange and magical turn, James finds out the
supernatural happenings in the woods and Phin’s absence could be linked.

James checked his cell for the umpteenth time, accidentally
slopping his latte through its plastic top and all over his woolly gloves. The
coffee had long since gone cold, but he’d still received no message from Phin.
He pocketed the phone, and his sigh clouded the frost-spiced air.

He’d been waiting for Phin—or rather, freezing his butt off
for the man—outside Starbucks on this Christmas Eve for the past half hour. He
glanced at his watch. Actually, it’d been thirty-seven minutes now. He’d
ordered his drink eons back, then had an impromptu chat with an undergraduate
student he’d taught last semester, promising her extra help with her
dissertation come January. A young couple who’d been enjoying a kiss beneath
the glittering lights of the college Christmas tree had finally tasted enough
of each other and now wandered off, arms locked tightly.

James considered giving up and following them down the
escalator into the metro. Maybe Phin had forgotten. The notion pained him,
especially given the silly fantasies he’d been concocting, most of which
concerned he and Phin shagging like bunnies nonstop till New Year. This was
daft, since James’ relationship with his fellow history lecturer had only just
blossomed beyond friendship. After six months of getting to know each other,
they’d shared four official and very enjoyable dates and one awkward nightcap
back at Phin’s crumbling townhouse in Foggy Bottom. Though they’d talked about
pretty much everything else, he didn’t know if Phin had family here in the
Washington DC area, or…damn it, why wouldn’t the man at least text him? Phin
often went out of town for long periods but had never left James hanging around
like this before.

He pulled out his phone yet again and squinted at the
screen. No messages.

One glance at Phin, hurrying up the street toward him, and
he forgave everything. Phin raked his fingers through his unruly black curls
and offered a dazzling grin. “James, I’m so sorry. I had a meeting with
Professor Machin-Smith.”

James matched Phin’s beam with his own. Phin’s lilting
southern Irish brogue melted him every time, and he could stare for hours into
those moss-colored eyes with their amber-gold flecks.

“The old git didn’t seem to have a notion what bloody day it
was,” continued Phin. “He ranted on and on about getting the department’s
citation index up, and—”

“It’s fine. I totally understand.” Heat rushed from James’
throat to his hairline, defying the cold.

Lord, Phin had such presence, along with a charming demeanor
that had physics majors wandering into his talks on ancient European
mythologies just to gawk at the man. Why on earth had James made excuses and
fled that evening he’d gone for a whisky back at Phin’s? Phin had been the one
who’d seemed nervous and quit talking, leaving James feeling uncomfortable.
James had still regretted his cowardly decision to depart every hour since. So
now it was time to be brave. No way was he going to miss another chance to get
naked and sweaty with this Celtic love god.

“I, uh, wondered if you fancied doing something tonight,”
ventured James. “I mean, I know you’ve probably got plans but—”

Phin offered an apologetic grimace, and James’ heart
freefell to the pavement. “I do have plans. I’m sorry.”

“Oh, of course you do. I, er, I wasn’t really expecting…um…”
Try not to look disappointed. Try not to sodding show it.
“Just a quick
coffee then? I’ve already got mine, and you can get a hot one. Or we could find
some place to grab a beer?”

Phin wrinkled his high bridged nose. “I’m really, really
sorry, I’ve got to go. I thought I’d have time for a drink, but—”

“It’s all right.” Never had it been so hard to force cheek
muscles into a smile. “I guess you’ve got family in town?”

Unlike James, whose relatives were back home in England,
apart from his parents. They were currently in the South Pacific, cruising on
the Queen Mary II.

Phin stuffed his hands deep into the pockets of his sports
jacket and buried his chin in his scarf. “Something like that.”

Phin’s noncommittal tone chafed, and then the opening notes
of The Ride of the Valkyries blared out of the man’s phone. Phin retrieved it
and cringed again.

“Shit, I have to get this. I’m sorry.” Phin leaned forward,
his breath searing James’ cheek. Phin licked his slender lips, and James’
stomach pitched into a wild swirl. For a moment of soaring hope and panic,
James thought Phin was going to kiss him—only a chaste peck, but a bold and
committed gesture so near their workplace. Instead, Phin squeezed James’ arm.
From somewhere in the direction of the White House, a police siren blasted.
“I’ll be in touch. Bye.”

Phin turned his back—which seemed broad as a double-decker
tourist bus and about as ruddy solid—and hurried off, answering his cell as he
went. “Yes, Brian, hi. Eh? What,
this
fir?”  Phin stopped dead in front
of the Christmas tree, raked his gaze from the twinkling star at the top to the
pot at its base, then leaned closer and sniffed like a bloodhound. “No. Seems
peaceful enough. Where did you say you’d got to? Right, I’ll be there ASAP.”
Then he sprinted into the university gardens and was gone.

Fixating on the black hole between the trees where Phin had
vanished, James swallowed the lump from his throat. With regard to Phin
stopping in his tracks to sniff a plant, he was not surprised. Phin had written
a book on ancient tree spirits and related traditions of worship, and had even
got into cahoots with some PhD students in the botany department to work on a
sequel. Perhaps Phin had been analyzing the appeal of the tree’s scent.

As for the man dashing off, what else did he expect? Few
folks were free to make impromptu plans on Christmas Eve. He had no right to be
as devastated as he was, chest aching and his legs kind of shaky. He’d been
childish getting his hopes up, though…sod it, he wasn’t after a repeat of their
romantic after-hours tour of the Library of Congress. He would have been
satisfied with a quick coffee, even ten minutes together. James was a reserved
kind of guy, but with Phin he couldn’t stop chatting and laughing. They got on
splendidly, though he clearly didn’t rank as highly on Phin’s priority list as
he thought he did.