Chicory Up: The Pixie Chronicles 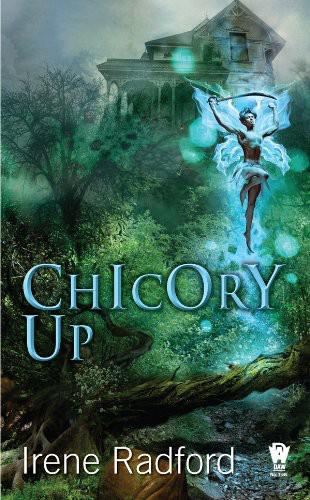 “ROSIE, MAY I ENTER YOUR GARDEN?
MABEL SENT ME,”

Thistle called to the queen of Chicory’s tribe.

“Go away!” Rosie yelled back from the flower directly above Thistle’s head. Only it wasn’t a flower. Rosie had curled up in a ball, letting her petal gown mimic the adjacent blossoms.

“Rosie, this is important. Mabel is sick. She sent me here to protect you all until she can come home again.”

“What can you do? You’re a woodland Pixie, as wild as a Dandelion. We’re a civilized garden tribe.”

“Ask anyone in this district how well I tend gardens,” Thistle shot back, affronted. “A Pixie is a Pixie. We all listen to plants of any variety to learn what they need to thrive.” She shifted her gaze, seeking signs of movement or flashes of color.

“Rosie, where is your tribe?” Thistle asked suspiciously.

“None of your business.”

“It is my business if they are all off fighting valley Pixies, or… or…” Stars above, could they be attacking the Pixies in The Ten Acre Wood, Thistle’s tribe?

Not that Alder, her king and philandering lover, didn’t deserve to be thrown off his throne. His own tribe was the only one with the right to do that.

Thistle didn’t know for sure. She needed to talk to Alder. Not likely to happen while she was exiled to a human body.

“We’re at war, Thistle,” Rosie said in that superior way of hers. “And there’s nothing you can do about it. We all know where your loyalties lie. And it isn’t in my garden.”

the Finest in Fantasy by

All characters and events in this book are fictitious.
Any resemblance to persons living or dead is strictly coincidental.

If you purchase this book without a cover you should be aware that this book may have been stolen property and reported as “unsold and destroyed” to the publisher. In such case neither the author nor the publisher has received any payment for this “stripped book.”

The scanning, uploading and distribution of this book via the Internet or via any other means without the permission of the publisher is illegal, and punishable by law. Please purchase only authorized electronic editions, and do not participate in or encourage the electronic piracy of copyrighted materials. Your support of the author’s rights is appreciated.

Nearly all the designs and trade names in this book are registered trademarks. All that are still in commercial use are protected by United States and international trademark law.

PRINTED IN THE USA

C
HICORY PEERED THROUGH THE LACY fronds of a bracken fern. His blue wings fluttered in unease. The pond at the center of The Ten Acre Wood looked full and healthy, as it should on the first day of summer vacation. A fat bullfrog croaked, slugs inched along the verge, birds sang in glorious morning greetings, and dozens of Pixies flitted about. Presiding over them all, the Patriarch Oak, full of sprouting mistletoe, invited climbers. Children should flock here from every Pixie territory for miles around.

Dawn had come and gone hours ago. The sun burned off the last traces of dew from the blooming foxgloves and the depression in the middle of lupine leaf clusters.

“Perfect,” he murmured to his charges. A bit of pride made his chest swell. Finally, Queen Rosie had entrusted this vital work to him, Chicory, a ditch weed of a Pixie.
But a loyal and trustworthy ditch weed
, he reassured himself.

“Are they here yet? I don’t see any children? Where are they?” Dandelion Five chittered in excitement.

“Hush,” Chicory hissed at all seven of his charges. “We have to be quiet. This isn’t our territory. But it’s the best place for Pixies to make friends with children. That’s important. Our most important work.”

“Hush yourself. Never known you to keep your mouth shut for more than three heartbeats,” Dandelion One sneered.

Dandelions!
Too dumb to remember orders, and so many of them, impossible to tell them apart. That was why they had numbers instead of individual names. He was sure that
other Pixie tribes had
a
Chicory,
a
Rose,
a
Foxglove, one of each, but only one. Every tribe had a horde of Dandelions. Often a dozen or more. They bred so fast no one could keep track of them all. Few bothered to look close enough to determine male from female.

Just then, three boys tromped noisily along the path from the park to the south. They probably thought they were moving quietly in their game of Pirate Treasure, or Cowboys and Indians, whatever adolescents played this year. To Pixie senses they thrashed and stomped, their whispers almost as loud as shouts.

“They look like eleven-year-olds,” Chicory guessed. “Just about the age boys give up believing in Pixies,” he continued in whispered tones. “Our job is to make sure they continue believing and let us stick around as friends to help them through the most difficult years of their lives.”

“Impossible. Once they give up believing, it’s useless to try and change their minds,” Dandelion Eight said, crossing her arms and hunkering down into the leaf litter.

“Not impossible. Just difficult. That’s why it’s so important we do this.”

“I’m tired. Let’s go home,” Dandelion Twelve whined. He was the youngest and smallest of the lot, probably too young to do the job. But old enough to learn about stubborn adolescent boys.

The boys in question each picked up a stout stick and swiped the tops off of the towering foxgloves. The round redheaded boy with lots of freckles and ears sticking out to the sides took a proper stance and stabbed with his mock sword. “Take that, you traitor to the Boy Scout oath,” he pronounced as he lunged into a mass of sword ferns.

“Boy Scouts are lame,” said the skinny, dark-haired boy with swarthy skin. He spoke with the inflection of another language holding primary place beneath his words.

“My Aunt Mabel says Boy Scouts are the best training for the Police Academy. I want to be a policeman when I grow up,” the redhead continued in his superior tones.

“Cops are bullies,” the youngest of the boys whispered shyly. “My dad says never trust a cop.”

“Are not!” Red insisted. He turned his stick toward the other two, as if ready to run them through with a real sword. “You two aren’t really my friends. You’re bad boys. Disrespectful boys. Just like Aunt Mabel said.” The last came out in a disappointed whisper.